American Indians and Alaska Natives and their Health Needs

Nearly 5 million nonelderly individuals self-identify as AIAN alone or in combination with another race, representing nearly 2% of the total nonelderly population. In most cases, analysis in this brief uses this inclusive group of AIANs. Within this group, some 2.3 million nonelderly individuals identify solely as AIAN, making up about 1% of U.S. population. AIANs live across the country but are concentrated in certain states (Figure 1). While many AIANs live in rural areas, only 22% live on reservations or land trusts. As of 2010, 60% of AIANs live in metropolitan areas.1 Some AIANs belong to a federally recognized Tribe, some belong to a state-recognized Tribe, and others are not enrolled in a Tribe. Members and descendents of members of federally recognized Tribes have broader access to certain federal benefits and services. 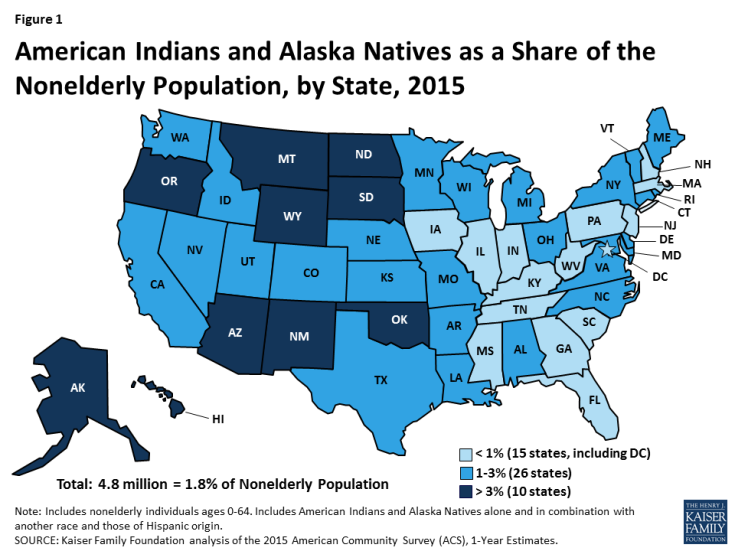 Figure 1: American Indians and Alaska Natives as a Share of the Nonelderly Population, by State, 2015 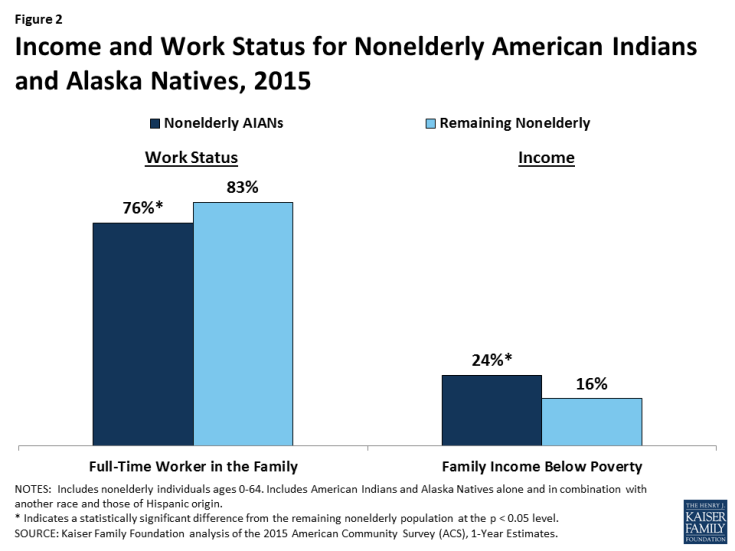 AIANs face significant physical and mental health problems. Among nonelderly adults, AIANs are more likely than other adults to report being in fair or poor health, being overweight or obese, and having diabetes (Figure 3). Moreover, suicide is the second leading cause of death for AIAN adolescents and young adults, with a suicide rate one and half times higher than the national average.2 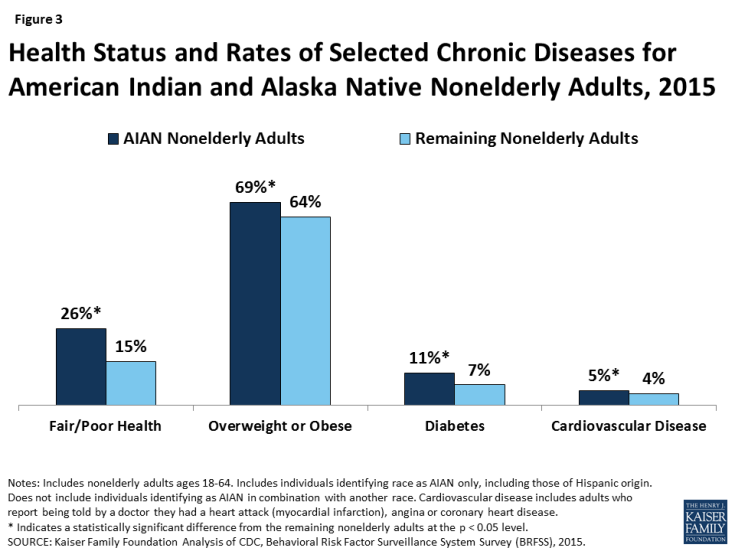 The Role of the Indian Health Service

The Indian Health Service (IHS) is responsible for providing health care and prevention services to AIANs. A network of hospitals, clinics, and health stations that are managed by IHS, Tribes or Tribal organizations, and urban Indian health programs provide IHS-funded services. In general, services provided through IHS- and Tribally-operated facilities are limited to members of and descendants of members of federally recognized Tribes that live on or near federal reservations. Urban Indian health programs serve a wider group of AIANs, including those who are not able to access IHS- or Tribally-operated facilities because they do not meet eligibility criteria or reside outside the service areas. AIANs receiving services through IHS providers are not charged or billed for the cost of their services.

IHS funding is limited and Congress must appropriate funding each fiscal year. The appropriated funds are distributed to IHS facilities across the country and serve as their annual budget. If service demands exceed available funds, services are prioritized or rationed. In FY2017, Congress appropriated $4.8 billion for IHS services (Figure 4). In addition to direct appropriations, revenues from third-party payers are a significant part of IHS funding, including Medicare, Medicaid, the Veterans Administration, and private insurance. A total of $1.3 billion will be collected from third-party payers in FY2017, with the largest share—$810 million—coming from Medicaid. 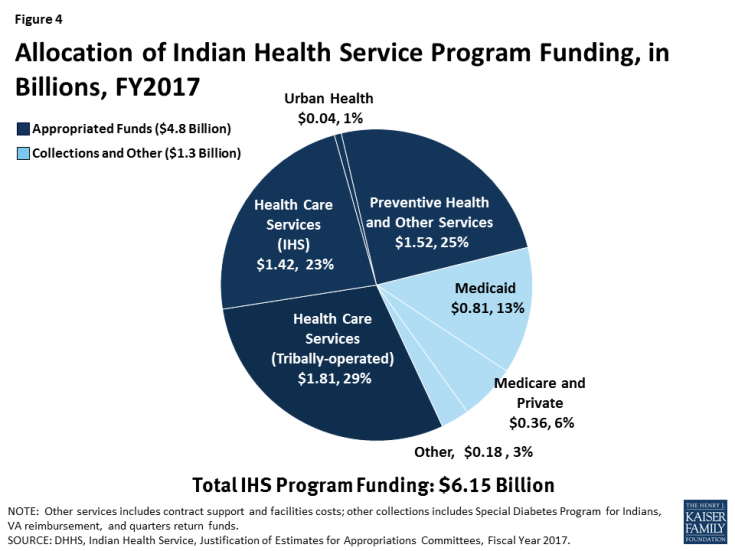 IHS services historically have been underfunded to meet the needs of AIANs. The services provided through the IHS consist largely of primary care, and include some ancillary and specialty services. If facilities are unable to provide needed care, the IHS and Tribes may contract for health services from private providers through the Purchased/Referred Care (PRC) program. However, urban Indian health organizations do not participate in the PRC program. Although the IHS budget has increased over time, funds are not equally distributed across facilities and remain insufficient to meet health care needs. 3 As such, access to services through IHS varies significantly across locations, and AIANs who rely solely on IHS for services often lack access to needed care. 4 Moreover, referrals through the PRC program are often limited to emergency services due to funding limitations.5

The Role of Medicaid

Just as with other eligible individuals, AIANs who meet state eligibility standards are entitled to Medicaid coverage in the state in which they reside. AIANs may qualify for Medicaid regardless of whether they are a member of a federally-recognized Tribe, whether they live on or off a reservation, and whether they receive services (or are eligible to receive services) at an IHS- or Tribally-operated hospital or clinic. AIANs with Medicaid can access care through all providers who accept Medicaid for all Medicaid covered benefits. As such, they have access to a broader array of services and providers than those who rely solely on IHS services for care. Moreover, Medicaid has special eligibility rules and provides specific consumer protections to AIANs.

Medicaid provides coverage to more than one in four (27%) nonelderly AIAN adults and half of AIAN children (Figure 5). AIANs have limited access to employer-sponsored coverage because they have a lower employment rate and those working often are employed in low-wage jobs and industries that typically do not offer health coverage. Medicaid and other public coverage help fill this gap. However, even with this coverage, nonelderly AIANs remain significantly more likely to be uninsured than the rest of the nonelderly population (17% vs. 11%). Nationwide, over 900,000 AIANs lack coverage, although the number and share of AIANs who lack coverage varies across states (Appendix Table 1). 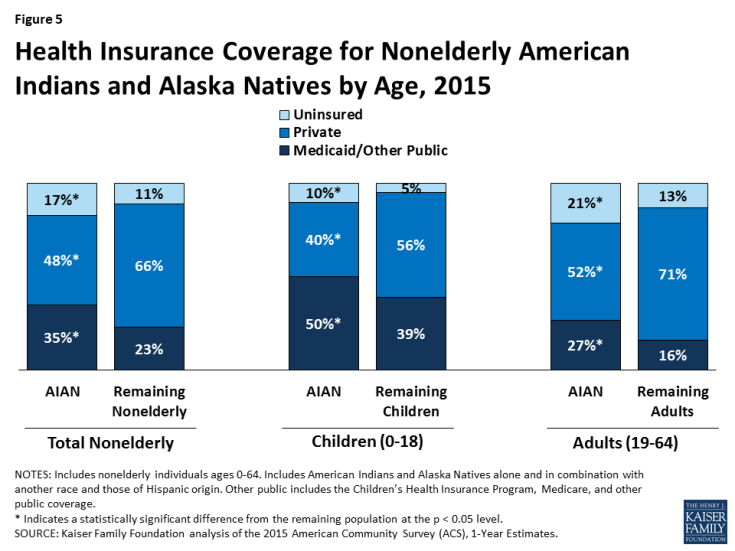 Medicaid also provides a key source of revenue for IHS and Tribal facilities. In contrast to IHS funds, which are limited at a fixed amount appropriated per year, Medicaid funds are not subject to annual appropriation limits. In addition, since Medicaid claims are processed throughout the year, facilities receive Medicaid funding on an ongoing basis for covered services provided to AIANs. As such, Medicaid revenues help facilities cover needed operational costs, including provider payments and infrastructure developments, supporting their ability to meet demands for care and maintain care capacity.

The federal government covers 100% of costs for services provided to AIAN Medicaid enrollees through an IHS- or Tribally-operated facility.6 This 100% matching rate reflects a policy judgment that states should not have to contribute state general funds to the cost of care provided by a federal facility, whether operated by the IHS or on its behalf by a Tribe.7 In 2016, the Centers for Medicare and Medicaid Services (CMS) released guidance that expands the scope of services considered “received through” an IHS/Tribal facility that may qualify for 100% federal match.8 Expanding the scope of services that can qualify for 100% federal match provides potential increased savings to states and incentives to increase access to care for AIANs and expand capacity of IHS and Tribal services.

Impact of the ACA Medicaid Expansion

The ACA Medicaid expansion provided a new coverage option for many uninsured AIANs in states that have implemented it. The ACA expanded Medicaid to low-income adults with incomes up to 138% of the federal poverty level. As of August 2017, 31 states and DC have adopted the Medicaid expansion, making many parents and adults without dependent children newly eligible for the program. Although a number of states that include a relatively large share of the AIAN population have expanded Medicaid, such as California, Arizona, and New Mexico, other states that are home to a large share of the population have not, including Oklahoma and Texas. In states that have not expanded, many poor adults fall into a coverage gap. These adults have incomes above Medicaid eligibility limits but below the lower limit for Marketplace premium tax credits, which begin at 100% of the federal poverty level (FPL). 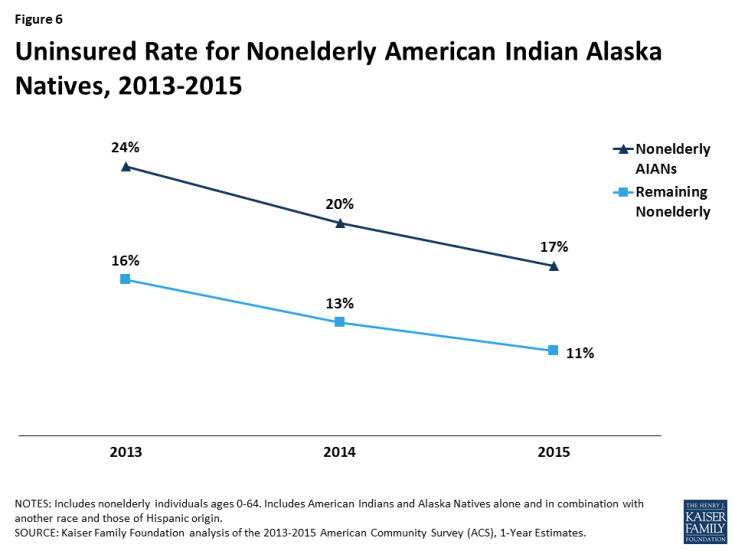 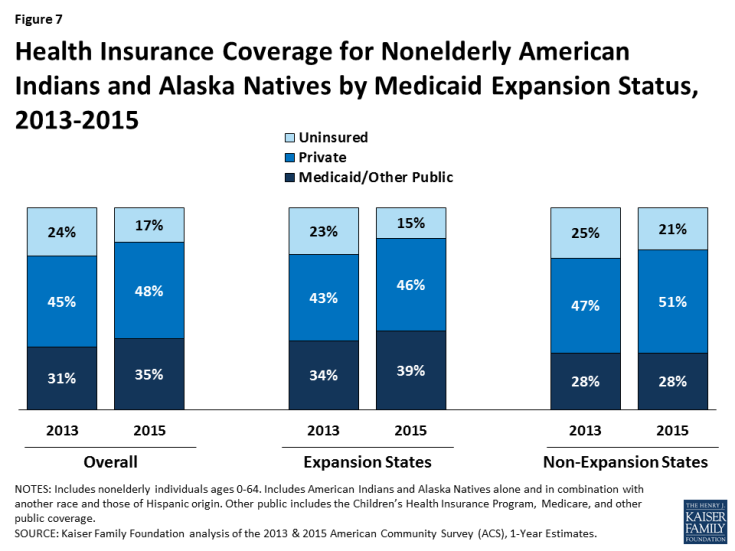 The Medicaid expansion provided increased Medicaid revenues for IHS-and Tribally-operated facilities. As noted, Medicaid serves as a key source of revenue for IHS providers. In states that expanded Medicaid, the share of patients served by IHS providers with Medicaid grew, resulting in increased revenues for these facilities that may enhance their capacity to provide services. Overall, nationwide, total IHS program funding from Medicaid revenue increased from $720 million in 2013 to nearly $810 million in 2017.9 Some facilities have also pointed to positive effects of the Medicaid expansion. For example, in Arizona, one Tribally-operated health system reported that about half of visits were by patients covered by Medicaid in 2016.10 Additionally, an Urban Indian Health Program in Arizona indicated that its uninsured rate at one clinic fell from 85% pre-ACA to under 10%.11 In Montana, one study finds that the Medicaid expansion improved access to care for AIANs and allowed facilities broader ability to refer patients for services from private providers under the PRC program. As noted, PRC program referrals have historically often been limited to emergency services due to funding limitations. However, with increased Medicaid coverage among patients and gains in Medicaid revenues, facilities can stretch PRC funds further to cover more services.12

In sum, AIANs have a broad range of physical and behavioral health needs and continue to face persistent disparities in their health and health care. Medicaid is a key source of coverage for AIANs, helping to fill gaps in employer-sponsored coverage for them and providing them access to a broader array of services and providers than available to them solely through IHS-funded services. In addition, Medicaid revenues provide an important source of support to IHS and Tribal facilities. The Medicaid expansion contributed to coverage gains among AIANs, enhancing their ability to access care. In addition, the expansion increased revenues to IHS- and Tribal facilities serving AIANs as a larger share of their patients gained coverage, enhancing their capacity to provide services.

Given the important role of Medicaid and the Medicaid expansion to AIANs and IHS and Tribal providers, reductions to the program, including loss of the Medicaid expansion, could result in Medicaid coverage losses for AIANs and reductions in revenue to IHS and Tribal providers. Such changes would limit access to services for AIANs, leaving them reliant on IHS-funded services only. At the same time, the availability of IHS-funded services would likely become more limited due to the losses of Medicaid revenue.