Health Coverage in the South in 2014

The Impact of the Affordable Care Act Coverage Expansions 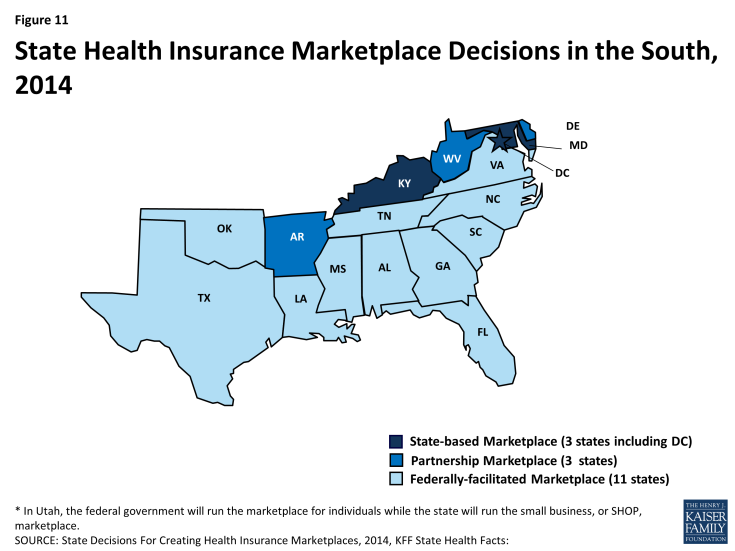 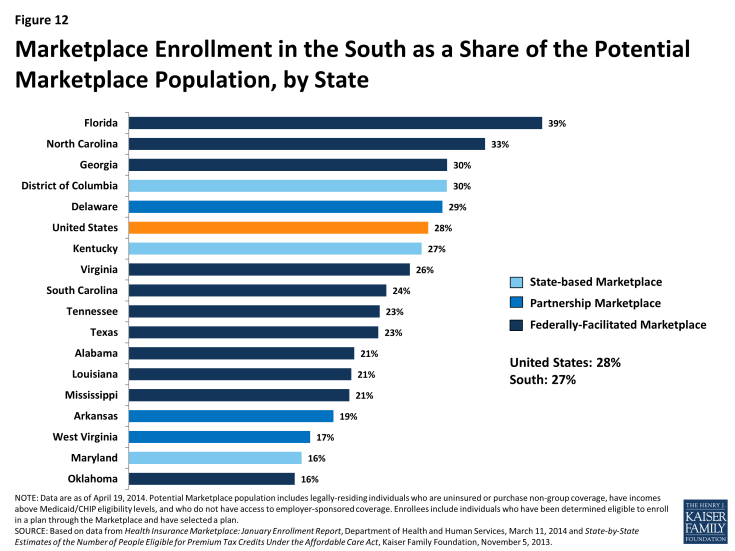 Figure 12: Marketplace Enrollment in the South as a Share of the Potential Marketplace Population, by State

The ACA offers the potential to significantly increase coverage in the South, especially for low-income adults, but gaps in coverage will remain, as many southern states are not implementing the Medicaid expansion. As enacted, the Medicaid expansion was to apply to all states, setting a national income floor of 138% FPL for all adults, but the Supreme Court ruling on the ACA effectively made the expansion a state option. Just over half of the states (27 states, including DC), including 6 of the 17 Southern states, are implementing the expansion in 2014 (Figure 13).2 There is no deadline by which states must implement the Medicaid expansion, so additional states may choose to expand in the future. 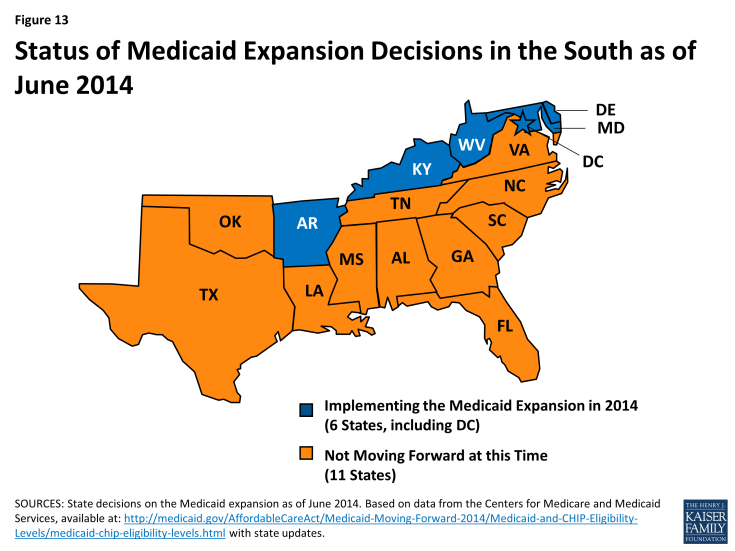 Figure 13: Status of Medicaid Expansion Decisions in the South as of June 2014

State Medicaid expansion decisions have significant fiscal implications for state spending on uncompensated care costs and indigent care programs, state economies, and for providers.4 If all states expanded Medicaid, southern states could experience the largest percentage increase in federal funds with the Medicaid expansion, compared to states in other regions (Figure 14). 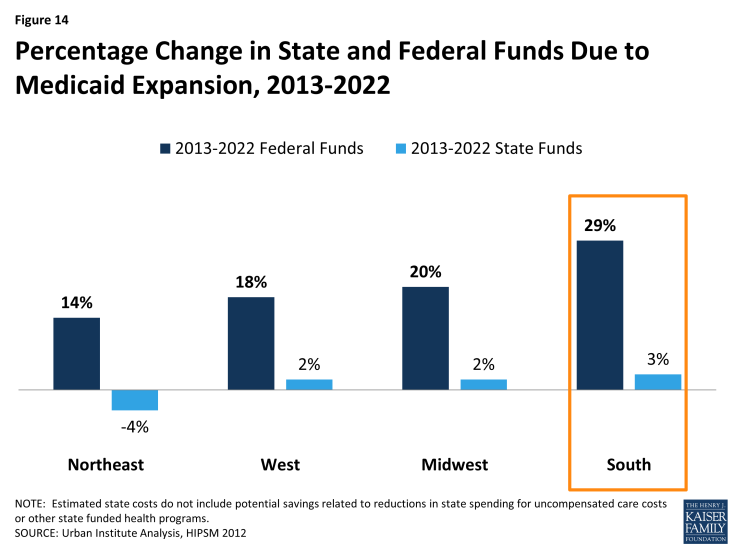 Figure 14: Percentage Change in State and Federal Funds Due to Medicaid Expansion, 2013-2022

If all states expanded Medicaid, southern states could also experience a 25 percent increase in Medicaid payments to hospitals relative to no expansion – the highest percentage increase of any region (Figure 15). 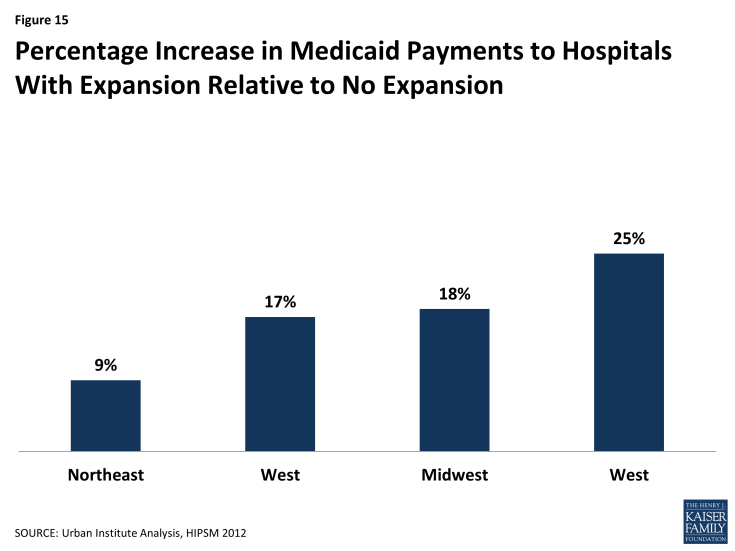 Figure 15: Percentage Increase in Medicaid Payments to Hospitals With Expansion Relative to No Expansion 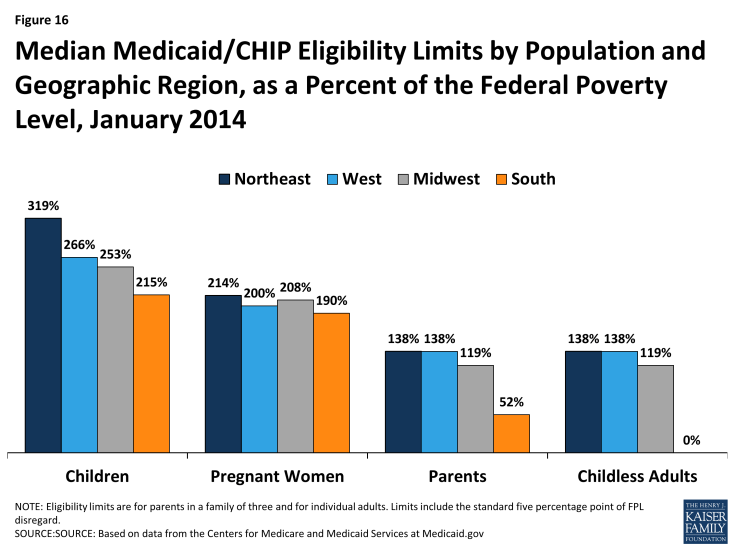 Figure 16: Median Medicaid/CHIP Eligibility Limits by Population and Geographic Region, as a Percent of the Federal Poverty Level, January 2014

Nearly 4 million poor uninsured Southerners fall into a coverage gap because they remain ineligible for Medicaid but do not earn enough to qualify for the premium tax credits for Marketplace coverage. Because the ACA envisioned that low-income people would receive coverage through Medicaid, the tax credit subsidies to help people purchase private coverage through the Marketplace are only available to people with incomes at or above the poverty level ($11,670 for and individual and $19,790 for a family of three in 2014). Consequently, in states that do not expand Medicaid, uninsured adults with incomes above Medicaid eligibility limits but below poverty fall into a “coverage gap.” These individuals earn too much to qualify for Medicaid but not enough to qualify for the premium tax credits. Over half (51%) of uninsured adults in the South who would be eligible for Medicaid if their states implemented the expansion fall into this coverage gap (Table 3). These 3.8 million poor uninsured adults in the South, nearly half of whom (46%) reside in Texas, Florida, and Georgia, make up nearly eight in ten of the 4.8 million poor uninsured adults who fall into the coverage gap nationwide (Figure 17). 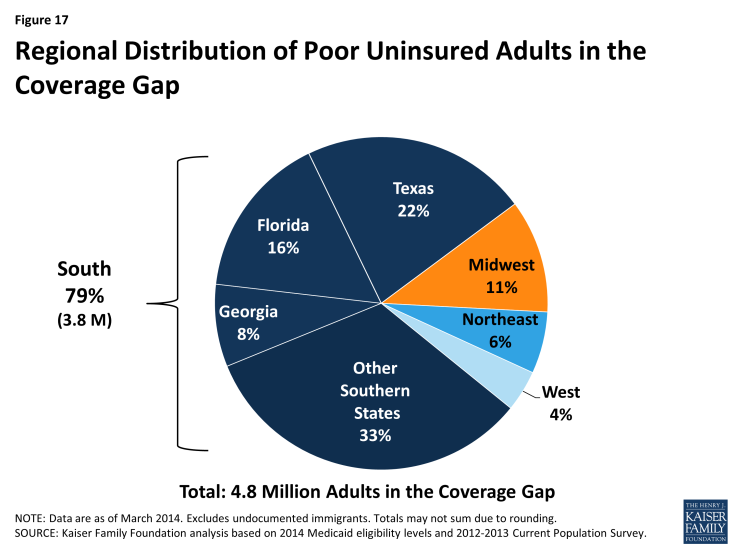 People of color are disproportionately affected by the coverage gap. Within the South, the impact of the coverage gap varies across racial and ethnic groups, reflecting the fact that Blacks are more likely than Hispanics to live in the South and to be uninsured. Overall, among uninsured adults in the South who would be eligible for Medicaid under the ACA expansion, 54% of adults of color and 56% of Blacks fall into the coverage gap, compared to less than half (47%) of Whites (Figure 18). 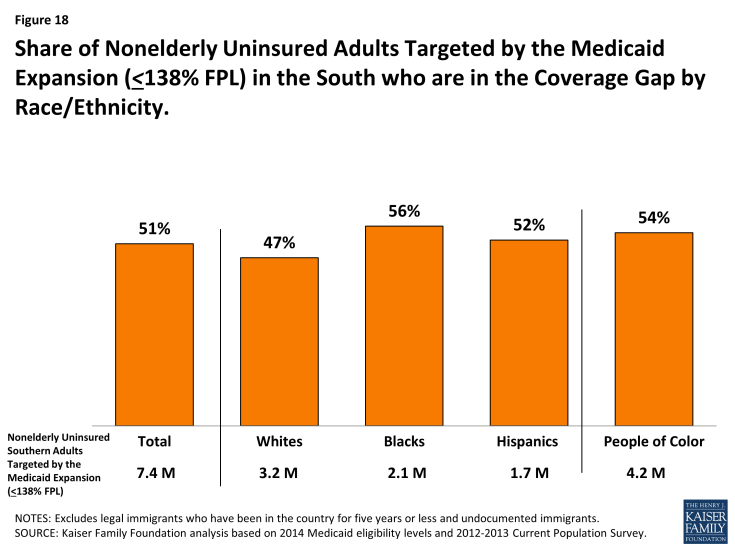 Figure 18: Share of Nonelderly Uninsured Adults Targeted by the Medicaid Expansion (<138% FPL) in the South who are in the Coverage Gap by Race/Ethnicity 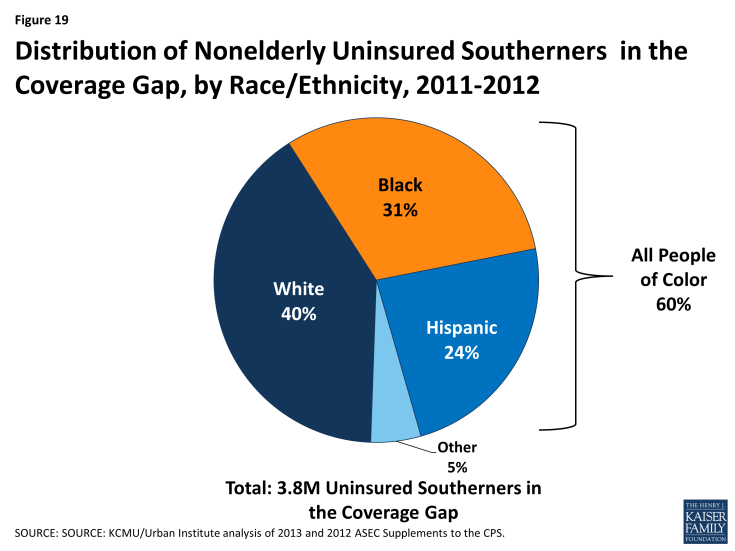 Figure 19: Distribution of Nonelderly Uninsured Southerners in the Coverage Gap, by Race/Ethnicity, 2011-2012 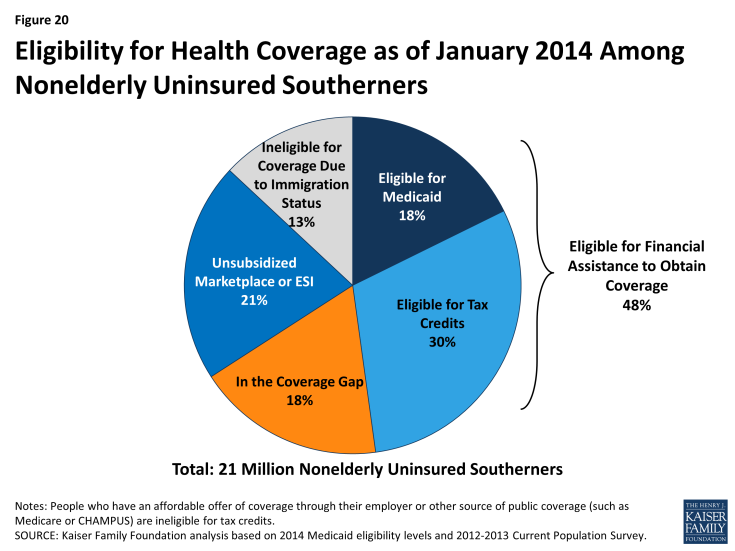 Figure 20: Eligibility for Health Coverage as of January 2014 Among Nonelderly Uninsured Southerners

Connecting Individuals to Coverage Through Outreach and Enrollment

Effective outreach and enrollment efforts are key to ensuring that the millions of uninsured Southerners who are eligible for coverage are enrolled. Even with remaining coverage gaps, millions of uninsured individuals in the South have gained access to new coverage options under the ACA. Effective outreach and enrollment efforts will be important for successfully enrolling these individuals, including targeted efforts to reach people of color, immigrant families, rural populations, low- and moderate-income families, and people with serious health needs. Regardless of state decisions to expand Medicaid, the ACA requires all states to adopt new approaches to simplify enrollment and renewal that make it easier for individuals to apply for and retain coverage. These include providing multiple application avenues for families (including online, by phone, and in person) and moving to technology-driven eligibility verification processes.6 Through previous experience with Medicaid and CHIP, a number of southern states have demonstrated that these and other strategies can be effective ways to enroll eligible populations into coverage while improving efficiency and minimizing burdens on state agencies (see Box 1). Looking forward, these state experiences provide key lessons for improving access to coverage in the South.

Health Coverage and Care in the South Today Translating Coverage to Care: Delivery Systems and the Safety Net