Translating Coverage to Care: Delivery Systems and the Safety Net

To improve health outcomes in the long term, it will also be important to ensure that newly-insured individuals are able to obtain needed primary and specialty care services. As uninsured individuals in the South gradually gain coverage and seek care, health resources in these communities may be further stretched. The ACA includes a number of provisions to help states improve health system capacity, including increased funding to expand community health centers and a temporary increase in Medicaid payment rates for primary care physicians.1 Increases in physician capacity will be especially important in areas with historically limited health resources.

Provider Capacity in the South

Medicaid payment rates are one lever for increasing provider supply and access in the program, but additional measures are needed to overcome provider shortages. In 2012, state Medicaid programs overall paid physicians just 66% of Medicare fee levels. Notably, though, 13 of the 17 Southern states paid Medicaid rates equal to at least 75% of Medicare rates, including eight southern states that paid 80% or more of Medicare fee levels (Figure 21). Under the ACA, Medicaid payment rates to primary care physicians (PCP) for most of their services must be at least equal to Medicare rates in 2013 and 2014 (the difference is fully funded by the federal government); in 2013, this provision increased PCP fees by at least 40% in half of the southern states, including Florida, where they more than doubled. 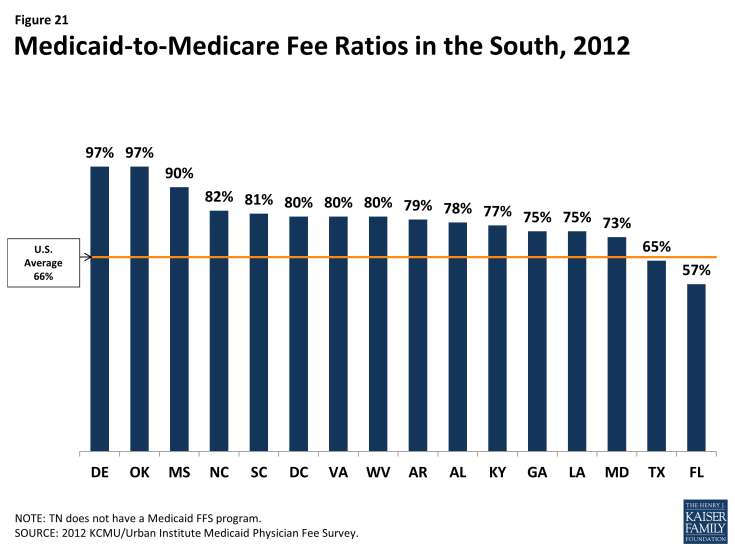 Although paying providers fee-for-service rates closer to Medicare and private insurance rates may attract more provider participation in Medicaid, absolute shortages in the supply of physicians, particularly in rural and low-income communities, are system-level capacity constraints that Medicaid payment rates cannot  correct. Broader strategies and investments to develop a more adequate health care workforce are called for. The ACA includes numerous provisions along those lines, but they will take time to bear fruit. A more immediate strategy for expanding access (especially access to primary care) is to expand the role of nurse practitioners (NP), physician assistants (PA), and other health professionals in delivering care. A large body of evidence on NPs shows that the care they provide is of equal or, in some cases, better quality than physician-provided care for the same conditions. In many states, including 11 states in the South, state regulations that restrict NP scope of practice are a major obstacle to this strategy. These restrictions prevent NPs from diagnosing and treating illness and prescribing drugs without physician supervision.2 Of the southern states, only DC, Maryland, and Delaware extend full autonomy to NPs to practice independently at the “top of their license” (Figure 22). 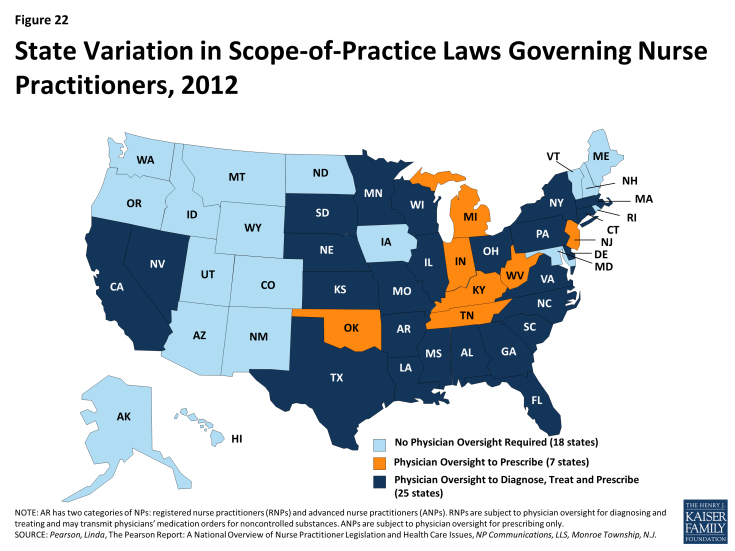 Medicaid managed care programs can also expand the role of NPs by including them in their primary care provider panels. A 2009 RAND study that estimated potential health care savings associated with expanding the role of NPs and PAs in Massachusetts assumed in its model that NPs and PAs could provide care for six simple acute conditions (e.g., cough, fever, earache) that are among those commonly treated at retail clinics staffed by these providers. Care for these six conditions, plus well-baby visits and general medical examinations, which the model also assumed NPs and PAs could provide, represent nearly one in five of all office-visits nationally.3 This analysis suggests that expanding the use of NPs and PAs in the South – in effect, increasing the supply could increase the availability of routine primary care.

Nationwide, a large and growing share of Medicaid beneficiaries receive their care in capitated managed care plans. Increasingly, state Medicaid programs across the country are contracting with private managed care plans to deliver Medicaid benefits to Medicaid enrollees. Under these contracts, states pay a fixed “capitation” rate to plans for each person enrolled, and the plans are at financial risk for all the services specified in their Medicaid contracts. Enrolled beneficiaries receive all or most of their care from their plan’s network of providers. Under the other major (though much smaller) model of Medicaid managed care, known as primary care case management (PCCM), states retain fee-for-service payment, but provide a small monthly fee to primary care providers to coordinate primary care for their Medicaid patients. Some states’ PCCM programs involve partial capitation payment.As of July 2011, over half of all Medicaid beneficiaries nationally were enrolled in risk-based managed care, but the proportion varied considerably across the country. A number of factors may contribute to the variation. Some states or areas lack sufficient population to attract risk-based plans. Organized medicine and managed care interests may influence Medicaid policy choices. Some states have abandoned risk-based contracting because of plan exits from the market, budget pressures, or a preference for managing their Medicaid programs themselves by contracting directly with providers, rather than shifting responsibility and financing for services to insurers.

Most states in the South have some share of their Medicaid population enrolled in risk-based managed care. In 2011, 5 of the 17 states in the South had no risk-based Medicaid managed care (Alabama, Arkansas, Louisiana, North Carolina, and Oklahoma). However, the other 12 had risk-based programs that, with a few exceptions, covered at least half their Medicaid population, and substantially more in the District of Columbia (77%), Maryland (75%) and Tennessee (97%) (Figure 23). Notably, Louisiana more recently adopted risk-based managed care statewide, Alabama is slated to do so later this year, and under Arkansas’ proposed “private option” for implementing the ACA Medicaid expansion, adults newly eligible for Medicaid are to be enrolled in the same managed care plans offered in the new insurance Marketplaces. 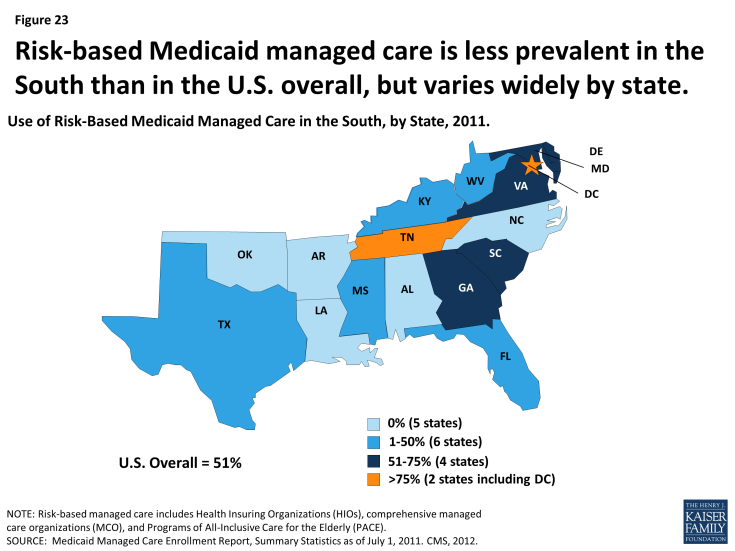 Figure 23: Risk-based Medicaid managed care is less prevalent in the South than in the U.S. overall, but varies widely by state

PCCM programs are prevalent in the South as well, operating in 12 of the 17 states in the region. In four states – Arkansas, Louisiana, North Carolina, and Oklahoma – over 60% of Medicaid beneficiaries were enrolled in these arrangements as of 2011. Interestingly, while the Medicaid trend nationally is for states to move away from the fee-for-service toward risk-based managed care, in the mid-2000s, both North Carolina and Oklahoma terminated their risk-contracting programs and implemented PCCM statewide.

Trends suggest a continued movement toward managed care within the South going forward. In a recent 50-state survey, nearly all states in the South reported that they undertook Medicaid managed care initiatives in 2013 or planned to in 2014, including expansions of managed care to new geographic areas or groups, mandatory managed care enrollment, implementation or expansion of managed long-term care, and measures to improve quality.

State Medicaid programs, including many in the South, are in a period of dynamic innovation in health care delivery and payment. Medicaid programs have historically been a source of new approaches to improving care for some of the nation’s most medically complex and low-income populations. Now, new options, demonstration programs, and funding opportunities provided by the ACA are catalyzing increased activity, including Medicaid participation in multi-payer initiatives designed to leverage broader systemic change, as well as reforms within Medicaid programs themselves.

Consistent with a broader trend nationally, most states in the South have undertaken medical home initiatives designed to provide comprehensive and continuous patient-centered care to Medicaid beneficiaries. In addition, both Alabama and North Carolina have taken up a new Medicaid option under the ACA to establish health homes to provide comprehensive care coordination for Medicaid beneficiaries with chronic conditions, and Arkansas, Delaware, the District of Columbia, Maryland, Oklahoma, and West Virginia are planning such programs. Alabama and North Carolina have also taken steps to establish accountable care organizations (ACO) in Medicaid. In ACOs, participating providers, plans, and hospitals are collectively responsible for the care of a defined population, encompassing the continuum of care across different settings. The participating providers agree to achieve specified financial and quality outcomes and may share in savings associated with their performance. The following selected initiatives in Arkansas, North Carolina, South Carolina, and Texas illustrate the diversity of service delivery and payment innovation underway in Medicaid:

Safety net providers will continue to be an important part of the health care system in the South. Historically, uninsured and low-income individuals have relied on safety net providers such as community health centers and clinics when seeking care, and even with broad-scale efforts to expand physician capacity and improve the delivery of services to low-income populations, these providers will likely remain a primary source of care for millions of newly-insured Southerners and many low-income individuals who will likely remain uninsured. As of 2011, there were 388 federally-funded federally qualified health centers (FQHCs) in the South that served over six million patients.4 The number of FQHCs available to serve the low-income population in the South varies by state from 5.6 per million low-income people in Florida to nearly 17 FQHCs per million people with low incomes residing in Mississippi (Figure 24). In addition, as of 2011, there were over 1,500 Medicare-certified rural clinics in the South serving the 20 million Southerners residing in rural areas5 and 448 public hospitals, which saw nearly 2.5 million patient visits in the year.6 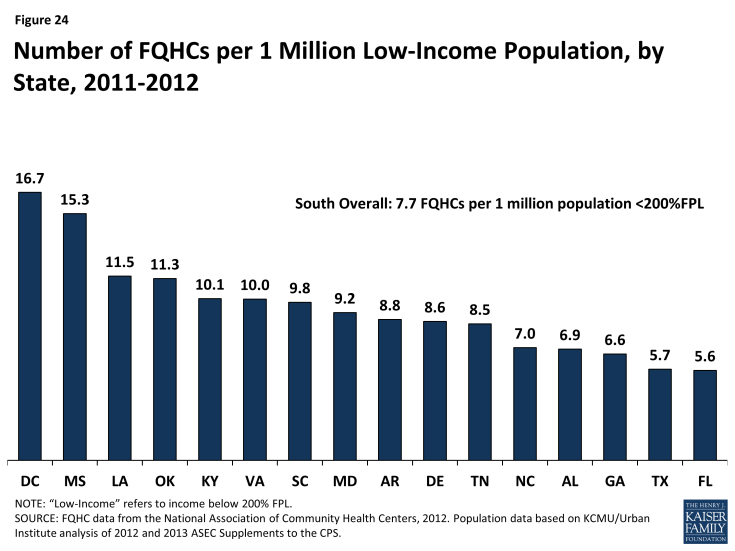 Community health centers and other safety net providers serve many vulnerable populations in the South. In addition to providing free or low-cost services to those with low incomes, community health centers are often seen as a trusted source for care within the community and are able to offer culturally and linguistically appropriate services that meet the needs of the diverse populations they serve. In the South, over 90% of patients in federally-funded community health centers are low-income. Over half (56%) are people of color, nearly four in ten are uninsured, 12% are better served in a language other than English, and 5% are homeless (Figure 25). Health centers provide an array of services to their patients, including primary and preventive care, professional services such as dental and mental health care, and enabling services such as case management, health education, and interpretation and translation services.7 As coverage expands, some of these health centers may experience revenue gains as more patients obtain coverage. However, they will continue to serve as a key source of care for individuals who remain uninsured or who have historically relied on their services, requiring adequate resources to support this role. 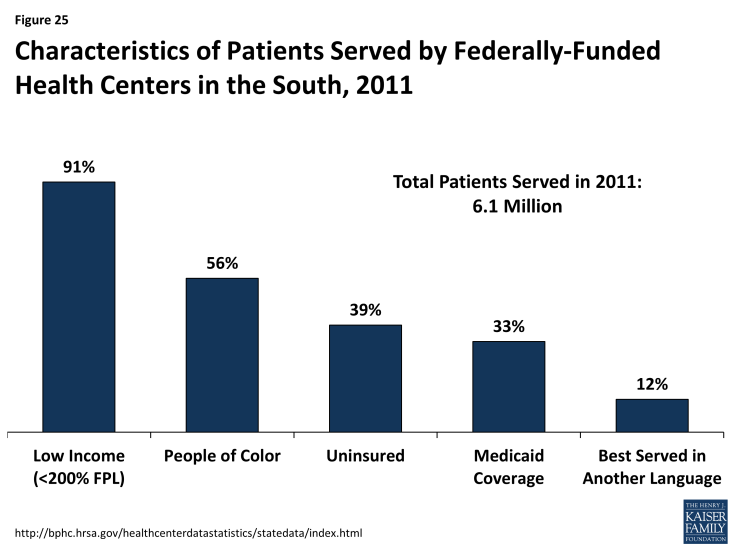 Figure 25: Characteristics of Patients Served by Federally-Funded Health Centers in the South, 2011

Health Coverage in the South in 2014 Conclusion