While there is no single definition of the “LGBT community” – indeed, it is a diverse and multidimensional group of individuals with unique identities and experiences, and variations by race/ethnicity, income, and other characteristics – LGBT individuals share the common experience of often being stigmatized due to their sexual orientation, gender identity, and/or gender expression.1  In its landmark 2011 report, The Health of Lesbian, Gay, Bisexual, and Transgender People: Building a Foundation for Better Understanding, the Institute of Medicine defines sexual orientation as “an enduring pattern of or disposition to experience sexual or romantic desires for, and relationships with, people of one’s same sex, the other sex, or both sexes.”2 This definition incorporates elements of attraction, behavior, and identity. It is important to note that for some individuals, their sexual identity does not necessarily fall into any specific category but, rather, exists along a spectrum. In addition, not all persons who engage in same-sex behavior or experience same-sex attraction identify as lesbian, gay, or bisexual.

Gender Identity refers to “an individual’s internal sense of being male, female, or something else. Since gender identity is internal, one’s gender identity is not necessarily visible to others.”3 Additionally, gender expression and gender role conformity further describe the extent to which a person does or does not adhere to expected gender norms and roles. Transgender refers to individuals whose sex at birth is different from their identity as male, female, or elsewhere along the gender spectrum. People who identify as transgender may live their lives as the opposite gender, and may seek prescription pharmacologic therapy and/or surgical transformation. Transgender people may identify as heterosexual, lesbian, gay, or bisexual, or somewhere else along the spectrum of sexual identity.

Lastly, while sexual orientation and gender identity are important aspects of an individual’s identity, they interact with many other factors, including sex, race/ethnicity, and class. The intersection of these characteristics helps to shape an individual’s health, access to care, and experience with the health care system.

Assessing the health needs and barriers to care of the LGBT population has been challenging due to the historical lack of data collection on sexual orientation and gender identity. While some health surveys have asked about sexual orientation, it has not been routine to collect and analyze data on sexual orientation and gender identity in major health surveys, particularly nationally representative ones, meaning that much of the data available to date have been from smaller, non-representative studies and convenience samples. Where data have been collected, they have mostly focused on same-sex couples using data systems that collect information on relationship status.4 In addition, where data are available for individuals, there is more information about lesbian, gay, and bisexual persons than transgender individuals (sometimes due to design and other times due to sample limitations). There has been growing recognition of the need for research focused on the LGBT community, and the ACA instituted new federal data collection requirements on disparities, which include sexual orientation and gender identity (described below). The National Health Interview Survey (NHIS), a nationally representative survey and the principal source of information on the health of the U.S. population, began including a question on sexual orientation in its 2013 survey and the first round of findings were released in July 2014.

The latest data available on the size and characteristics of the LGBT population are as follows: 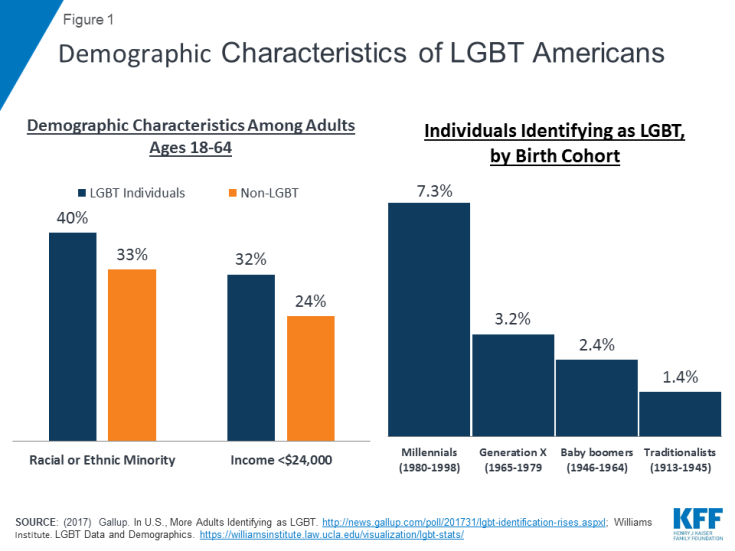