A continually growing body of research consistently shows people of color are bearing a disproportionate burden of COVID-19 cases, deaths, and hospitalizations and that they may face barriers to testing. For example, KFF analysis of state reported data shows that Black individuals account for more cases and deaths relative to their share of the population in most states reporting data. Other analysis of state-reported data finds higher mortality rates among Black and American Indian and Alaska Native (AIAN) people, disparities for Asian and Native Hawaiian and Pacific Islander (NHOPI) individuals in certain areas, and a recent rise in mortality rates for NHOPI and Hispanic people. Data also show that Black, Hispanic, and AIAN people are at increased risk of hospitalization due to COVID-19. Information on testing by race and ethnicity has been limited but suggests people of color may face increased barriers to testing.

This analysis builds on this body of research by examining COVID-19 testing, infection, hospitalization, and death as of July 2020 by race and ethnicity among active patients in the Epic health record system, which includes 53 health systems representing 399 hospitals across 21 states (see Methods for more details). It contributes to the research in this area by providing insight into the experiences of a large patient population across a range of states and health systems, examining variation in the acuity of patients by race and ethnicity at the time they test positive for COVID-19, and assessing whether racial disparities in hospitalization and death persist after controlling for sociodemographic characteristics and underlying health conditions.

Overview of the Epic Patient Population

The analysis is based on Epic Health Research Network (EHRN) and KFF analysis of data for roughly 50 million patients in the Epic health record system who have interacted with the health system in the past two years and have known race and ethnicity. Findings are presented for Black, Hispanic, Asian, and White patients. Due to data limitations, we do not present findings for smaller population groups, including AIAN and NHOPI patients, or people who report multiple races. As availability of data for smaller population groups increases over time, it may allow for future analyses focused on the experiences of these populations.

We examined overall rates of testing, infection, hospitalization and death associated with COVID-19 among the total active population by race and ethnicity. In addition, we assessed the share of positive cases among individuals tested and the level of care individuals required at the time they tested positive by race/ethnicity.

Testing, Positivity Rates, and Level of Care at Time Tested 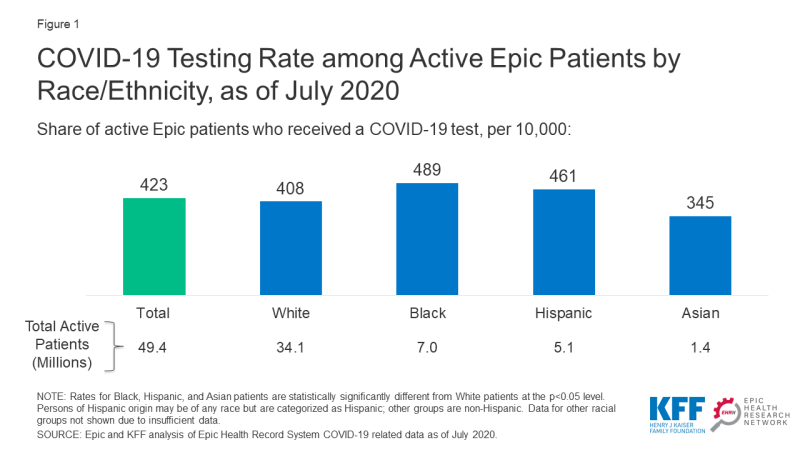 Figure 1: COVID-19 Testing Rate among Active Epic Patients by Race/Ethnicity, as of July 2020 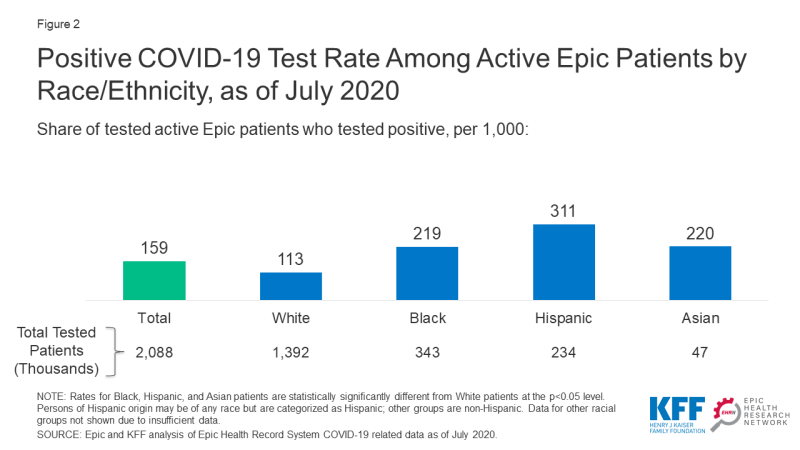 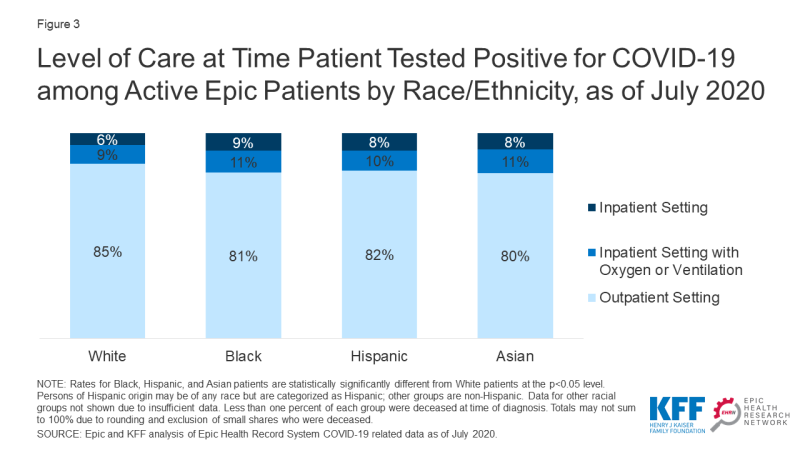 Figure 3: Level of Care at Time Patient Tested Positive for COVID-19 among Active Epic Patients by Race/Ethnicity, as of July 2020 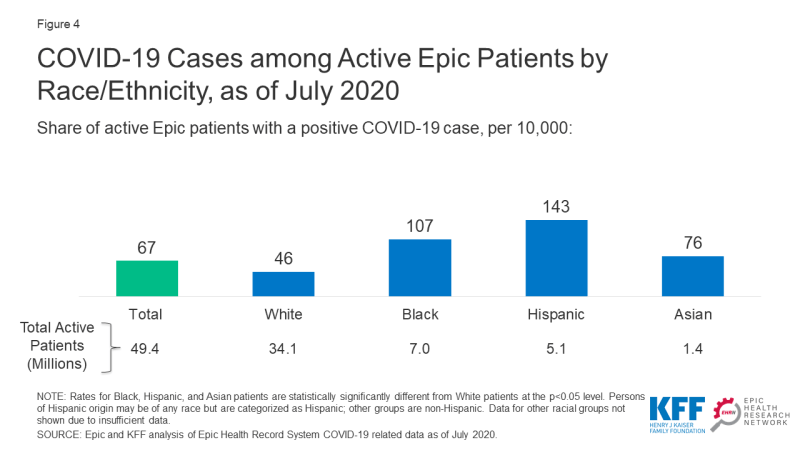 Figure 4: COVID-19 Cases among Active Epic Patients by Race/Ethnicity, as of July 2020 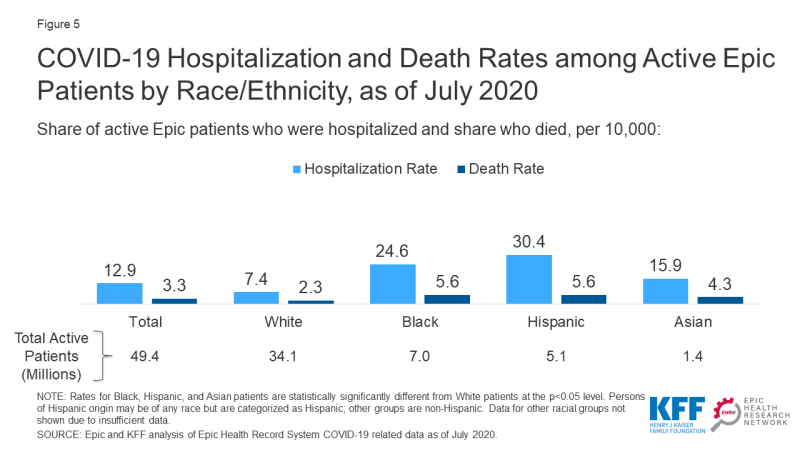 Figure 5: COVID-19 Hospitalization and Death Rates among Active Epic Patients by Race/Ethnicity, as of July 2020

Risk of Hospitalization and Death by Race/Ethnicity

In this analysis, we controlled for age, sex, and health conditions that a previous EHRN analysis had identified as being significantly associated with higher risk of hospitalization and death (including, hypertension, diabetes, heart failure, chronic obstructive pulmonary disease (COPD), cerebrovascular disease or stroke, and obesity). We also controlled for social vulnerability based on where each person lives, using the CDC’s Social Vulnerability Index. The CDC’s Social Vulnerability Index identifies the level of social vulnerability associated with a census area based on 15 social factors, including poverty, income, employment, education, age, household composition, housing, transportation, and racial/ethnic distribution. It was developed to help public health officials and emergency response planners identify and map the communities that will most likely need support before, during, and after a hazardous event.

Among patients who tested positive for COVID-19, people of color remained at increased risk for hospitalization and death after controlling for sociodemographic factors and underlying health conditions. Asian patients were at the highest risk relative to White patients, followed by Hispanic and Black patients. Specifically, Asian patients were 57% more likely to be hospitalized and 49% more likely to die than White patients with the same age, sex, social vulnerability, and comorbidities (Figure 6). Similarly, Hispanic patients were 53% and 30% more likely to be hospitalized and die compared to White patients with similar characteristics and underlying health conditions, and Black patients were 33% and 19% more likely to be hospitalized and die after controlling for these factors. These findings show that differences in these underlying sociodemographic factors and health conditions do not fully explain the higher rates of hospitalization and death experienced by people of color. They suggest that other factors, including racism and discrimination, are negatively affecting COVID-19 health outcomes through additional avenues that are not captured by these measures, as discussed further below. 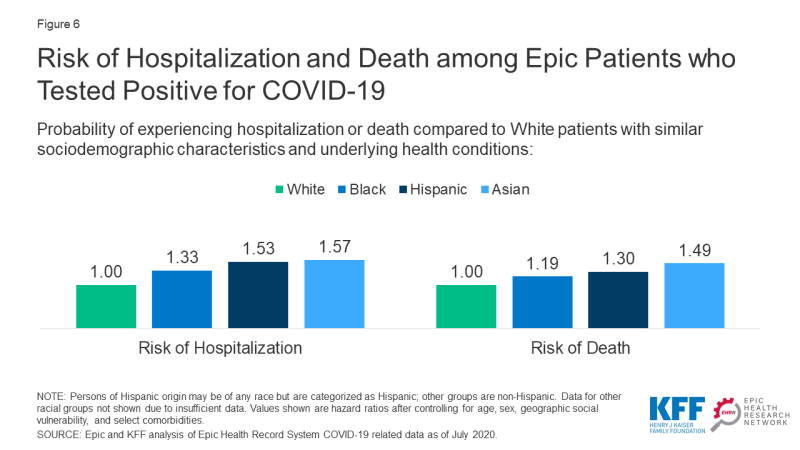 Figure 6: Risk of Hospitalization and Death among Epic Patients who Tested Positive for COVID-19

Consistent with other research, these findings show that, among patients across a range of health systems and states, people of color were at significantly increased risk for infection from coronavirus compared to their White counterparts. As previously documented, people of color face increased risk of exposure to coronavirus due to their living, working, and transportation situations. They are more likely to be working in low-income jobs that cannot be done from home, to be living in larger households in densely populated areas, and to utilize public or shared modes of transportation.

Despite being at increased risk of exposure to the virus, people of color did not have markedly higher testing rates compared to White patients and were more likely to be positive when tested and to require a higher level of care at the time they tested positive for COVID-19. These findings suggest that people of color may face increased barriers to testing that contribute to delays in them obtaining testing until they are in more serious condition compared to White patients. Other research suggests that people of color may face longer wait and travel times to access testing and have more limited access to testing within their neighborhood. Moreover, people of color are more likely to be uninsured and to face other barriers to health care, which may contribute to delays in obtaining testing or treatment. The findings from this analysis may understate barriers to testing as they represent active patients who are already connected to a health care system. Individuals who are not connected to a health system or provider may face further barriers to testing and care.

The findings build on previous studies that show people of color are at significantly increased risk for hospitalization and death due to COVID-19 and that these disparities persist after controlling for sociodemographic characteristics and underlying health conditions. These findings, in part, reflect their higher infection rates and higher rates of underlying health conditions that increase their risk of experiencing serious illness if they are infected with the virus. They also may reflect increased barriers to care, which can result in them delaying care and ultimately experiencing more serious conditions. However, this analysis further shows that racial disparities persist among patients who tested positive for COVID-19 after controlling for age, sex, social vulnerability, and comorbidities. Given that a wide body of research has demonstrated that racial health disparities are not driven by biologic differences, this finding suggests that there are other ways racism and discrimination may be negatively affecting COVID-19 health outcomes that are not captured by these measures. For example, research shows that people of color receive poorer quality of care. It also shows that the health care system’s historic mistreatment and abuse of communities of color and ongoing bias and discrimination among providers contribute to negative patient experiences and mistrust of the health care system. Research further suggests that chronic exposure to racism and discrimination create physiological or hormonal responses that negatively affect health (i.e., weathering).

In sum, consistent with a growing body of research, these findings show that people of color are bearing a disproportionate burden of negative health outcomes related to the COVID-19 pandemic at every stage – rates of infection, access to testing, and severity of illness and death. Other analysis also shows that the pandemic is taking a larger economic toll on people of color. While these disparities, in part, reflect social and economic inequities and underlying differences in health, the findings also show that they are not fully explained by these differences. Together, the findings point to the importance of considering health equity in COVID-19 response and relief efforts and health care more broadly, and, in particular, improving access to testing before individuals develop severe illness in order to slow the spread of infections. They also illustrate the importance of efforts to address disparities considering a wide array of factors both within and beyond the health care system and addressing structural and systemic racism and discrimination as root causes. These efforts will be key for narrowing the disparate effects of COVID-19, ensuring equitable distribution of treatments and a vaccine as they are developed, and preventing widening disparities in health care more broadly looking forward.