Data on COVID-19 by Race/Ethnicity

At the outset of the COVID-19 pandemic, limited data were available on cases, hospitalization, deaths, and testing disaggregated by race/ethnicity, constraining the ability to understand its effects across communities and to target response and relief efforts. Availability of this data has increased over time and, along with it, there has been a growing body of analyses examining race-associated differences in the impacts of the virus. As of August 2020, nearly all states were reporting COVID-19 related cases and/or deaths by race and/or ethnicity. Following early state reporting of these data, the Centers for Disease Control and Prevention (CDC) began reporting hospitalizations, cases, and deaths by race/ethnicity, and the Centers for Medicare and Medicaid Services (CMS) and Health Resources and Services Administration (HRSA) began reporting limited data. (See Appendix A for a list of federal sources of COVID-19 data by race/ethnicity). Beyond these state and federal data sources, health systems and health insurers may also collect data, but these data typically are not publicly accessible.

While data have improved over time, they continue to have significant gaps and limitations. For example, some states only report either cases or deaths, states use different race/ethnicity categories, states vary in which racial/ethnic groups for which they report data, and some states have high shares of cases with unknown race/ethnicity. The federally reported data provide more standardized race/ethnicity categorizations but still have limitations, including high shares of cases with unknown race/ethnicity as well as lack of state-level data for some measures and inconsistencies that limit comparability of data across states. The federal data on hospitalizations represent a subset of 250 acute care hospitals in 14 states that are part of the Coronavirus Disease 2019-Associated Hospitalization Surveillance Network (COVID-NET). As of early August, data on testing by race/ethnicity remain very limited, with only six states reporting testing by race/ethnicity. In addition, because people of color may be at greater risk for exposure due to their jobs or living circumstances, data on testing rates alone cannot necessarily identify disparities. Data are available for tests conducted at community health centers, which primarily serve low-income patients and communities of color, though the data are not representative of a state’s population and are based on rapid response surveys.

Key Findings on COVID-19 by Race/Ethnicity

Below is a summary of key findings from data and analyses that examine reported COVID-19 cases, deaths, hospitalizations, and testing by race and ethnicity available as of early August 2020.1 (See Appendix B for a list of analysis referenced in this brief.) To collect relevant analyses, we conducted keyword searches of websites for government, research, and policy organizations that publish health-related research; media; and PubMed. While we tried to be comprehensive in our inclusion of studies and findings on this topic, it is possible that we omitted some relevant studies or findings. Moreover, because work in this area is continually developing and growing, research that is more recent may be available that this summary does not reflect.

Multiple analyses of available federal, state, and local data show that people of color are experiencing a disproportionate burden of COVID-19 cases and deaths. They show particularly large disparities in cases and deaths for Black and AIAN people and widespread disparities in cases among Hispanic people compared to their White counterparts. Data also reveal disparities for Asian and NHOPI individuals in certain areas and show a sharp recent rise in mortality rates for NHOPI and Hispanic people. There is limited data and research to understand of impacts for subgroups, such as immigrants, who may be at increased risk. 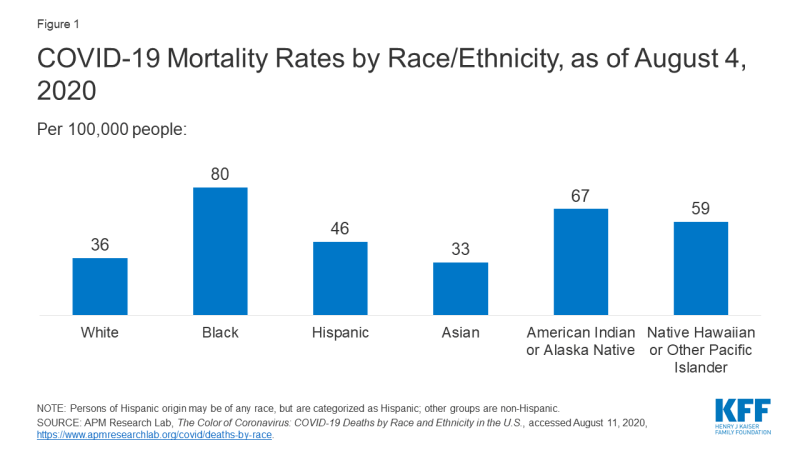 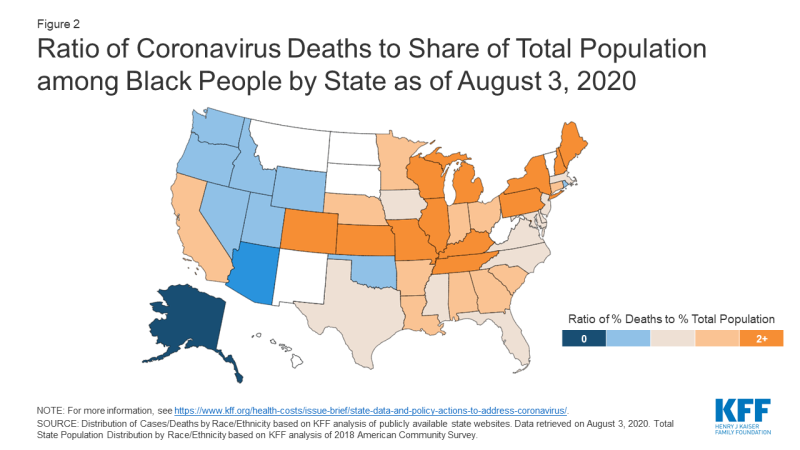 Figure 2: Ratio of Coronavirus Deaths to Share of Total Population among Black People by State as of August 3, 2020

Disparities in COVID-19 deaths for people of color persist across age groups, and people of color experience more deaths among younger people relative to White individuals. Researchers examining federally reported data find increased risk of death due to COVID-19 among Black, Hispanic, AIAN, and Asian and Pacific Islander people as compared to their White counterparts across age groups, with particularly large disparities among younger adults age 25-54. The study also found that Black and Hispanic populations lost more years of total potential life due to COVID-19 compared to the White population, even though the White population is three to four times larger. Other analysis finds that disparities in deaths widen for all groups of color after adjusting for age. CDC analysis of data for roughly 11,000 COVID-19 deaths in 16 public health jurisdictions found that over one in three (35%) deaths among Hispanic people and 30% of deaths among people of color were among those under age 65, compared to 13% of deaths among White people. Additionally, the median age of individuals dying from COVID-19 was 9 to 10 years younger among people of color.

Black and Hispanic people have higher hospitalization rates compared to their White counterparts. Data from COVID-NET show that, from March 1 through July 18, age-adjusted hospitalization rates due to COVID-19 for Black, Hispanic, and AIAN people were each roughly 5 times higher than that of White people (Figure 3). Another analysis of patients at a large hospital system in Boston who tested positive for COVID-19 found that a higher proportion of Hispanic patients were hospitalized compared to Black or White patients, particularly among those under age 60. In contrast, a study of patients tested at a health system in the Baltimore-Washington DC found a higher positivity rate among Latino patients but a lower hospital admission rate among Latino patients who tested positive. Latino patients who were hospitalized were younger, more likely to be male, and had fewer comorbidities compared to White or Black patients. Studies using data from an academic health system in Atlanta, Georgia, a large health system in California, and a health system in Chicago all find that Black patients are at higher risk for hospitalization. Reflecting these higher rates, several studies also found that people of color make up a disproportionate share of COVID-19 hospitalizations relative to their share of the population or total hospital visits. For example, earlier data from COVID-NET based on 580 hospitalizations as of March 2020 show that Black people accounted for more hospitalized COVID-19 patients compared to their share of the population in the area studied (33% vs. 18%). A study using data from a large health system in Louisiana found that Black people accounted for over three-quarters of patients who were hospitalized with COVID-19 (77%) and over 71% of in-hospital deaths, compared to just 31% of the total patient population. 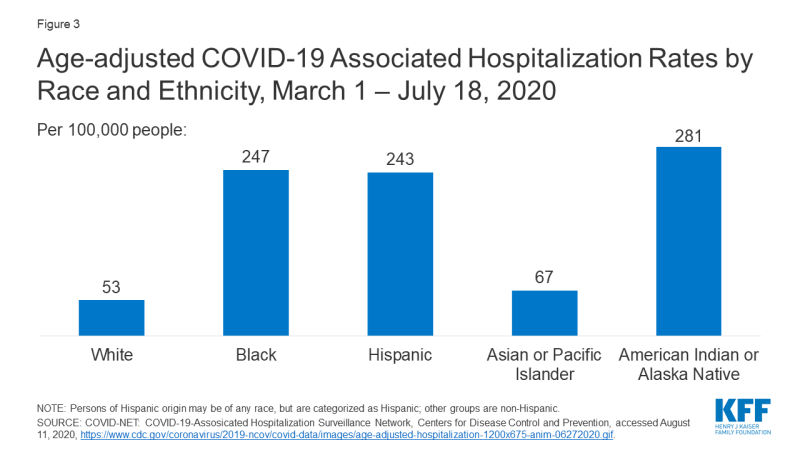 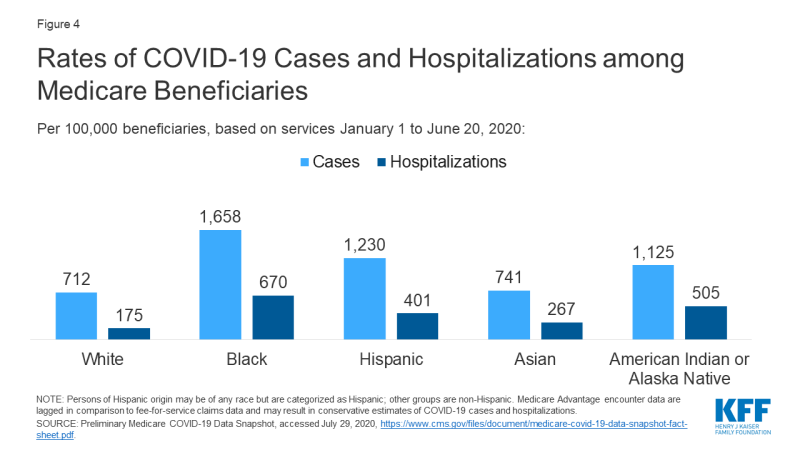 Figure 4: Rates of COVID-19 Cases and Hospitalizations among Medicare Beneficiaries

Data to understand variation in testing by race/ethnicity remains very limited. Very few states (5 as of July 2020) report testing data by race/ethnicity. Data on testing within community health centers show that people of color represented more than half of all people tested (57%) and confirmed cases (56%) at health centers, and that Hispanic patients made up a higher share of positive tests compared to their share of total tested patients. Reporting on testing site locations suggests that testing sites in and near predominantly Black and Hispanic neighborhoods are likely to face greater demand than those near predominantly White areas, which could contribute to longer wait times. Other research finds that the share of people of color in an area is associated with an increase in travel time to a testing site. Similarly, analysis of data from New York City found that more tests were performed in neighborhoods with higher shares of White residents, but that the highest proportion of positive tests were in neighborhoods with more people of color and lower socioeconomic measures. Reporting on testing site locations in Texas found that in four of the six largest cities testing sites are disproportionately located in census tracts where the share of White residents is greater than the city median.

Together, these data show that people of color are bearing a disproportionate burden of COVID-19 cases, deaths, and hospitalizations and that they may face increased barriers to access testing. Other analyses also suggest that the COVID-19 pandemic is taking a larger economic toll on people of color. These disparities in COVID-19 reflect and compound longstanding underlying social, economic, and health inequities that stem from structural and systemic barriers across sectors, including racism and discrimination. Researchers across the studies suggest that these underlying disparities put people of color at increased risk for exposure to the virus, experiencing serious illness if they are infected, and facing barriers to accessing testing and treatment. For example, their living and employment situations make it more difficult to social distance, as they are more likely to work in jobs that cannot be done at home, more likely to use public transportation, and more likely to live in larger households. Variation in access to testing, delays in seeking care due to lack of insurance and other access barriers, as well as higher rates of underlying health conditions may contribute to more serious illness among individuals if they are infected and individuals being in more serious condition when they do seek care, which could contribute to higher rates of hospitalization and death.

While these data and analysis provide important insights into the disparate impacts of COVID-19, there remain significant data gaps and limitations that point to the importance of continued efforts to increase the availability of COVID-19 data by race and ethnicity. Data on testing may grow as, under the CARES Act and guidance from HHS, all laboratories or other facilities performing COVID-19 testing must report data to HHS and “make every reasonable effort” to collect and report demographic data, including race/ethnicity, starting August 1. However, continued efforts will be required to provide for timely, complete, and comparable data that allow for better understanding of COVID-19 impacts overall and particularly for smaller population groups, such as AIAN and NHOPI individuals as well as among ethnic groups. These data are key for understanding impacts across communities, guiding response and relief efforts, and providing for equitable access to treatments and vaccines as they are developed.

The health and economic impacts of COVID-19 could further widen racial/ethnic disparities at a time when there is a growing focus on and call for racial justice and health equity. Overall, the findings highlight the importance of considering how COVID-19 relief and response efforts will address inequities, including in decisions related to distribution of treatments and vaccines once they become available. Prioritizing equity will be key for addressing the current gaps in COVID-19 and health care more broadly and preventing widening of disparities in the future.