Medicaid covers one in five Americans, accounts for one in six dollars spent on health care in the United States, and makes up more than half of all spending on long-term services and supports.1 Medicaid is a state budget driver as well as the largest source of federal revenue to states. The program is constantly evolving in response to federal policy changes, the economy, and state budget and policy priorities. As states began state fiscal year (FY) 2020, the economy in most states was strong. With fewer budget pressures, many states reported expansions or enhancements to provider rates and benefits. As several states implemented, adopted, or continued to debate the ACA Medicaid expansion, a number of states also continued to pursue work requirements and other policies promoted by the Trump administration that could restrict eligibility. Other key areas of focus highlighted in the report include Medicaid initiatives to address social determinants of health, control prescription drug spending, improve birth outcomes and reduce infant mortality, and address the opioid epidemic.

This report provides an in-depth examination of the changes taking place in Medicaid programs across the country. The findings are drawn from the 19th annual budget survey of Medicaid officials in all 50 states and the District of Columbia conducted by the Kaiser Family Foundation (KFF) and Health Management Associates (HMA), in collaboration with the National Association of Medicaid Directors (NAMD). This report highlights certain policies in place in state Medicaid programs in FY 2019 and policy changes implemented or planned for FY 2020. The District of Columbia is counted as a state for the purposes of this report. Given differences in the financing structure of their programs, the U.S. territories were not included in this analysis. Key findings from the report are pulled from five sections: eligibility, delivery systems, benefits, long-term services and supports, and provider rates and taxes. Each section highlights key issues to watch for future policy development (ES Figure 1). 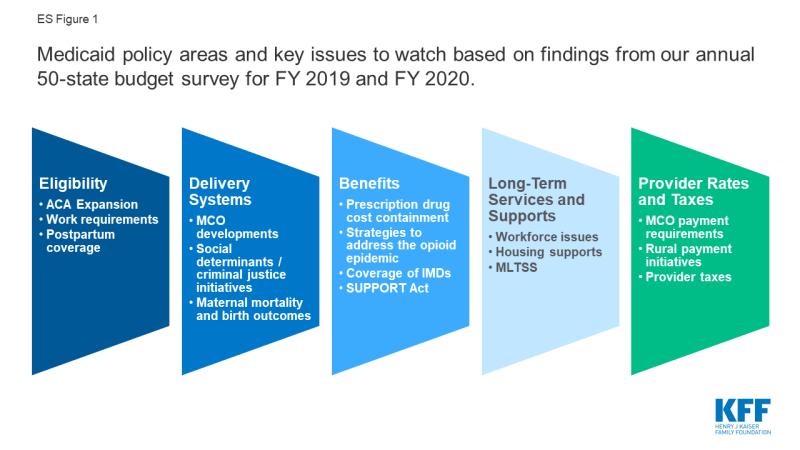 ES Figure 1: Medicaid policy areas and key issues to watch based on findings from our annual 50-state budget survey for FY 2019 and FY 2020.

As of July 1, 2019, among the 40 states with comprehensive risk-based managed care organizations (MCOs), 33 states reported that 75% or more of their Medicaid beneficiaries were enrolled in MCOs. States continue to carve-in behavioral health services to MCO contracts and nearly all states have in place managed care quality initiatives like pay for performance or capitation withholds. Medicaid programs have been expanding their use of other service delivery and payment reform models to achieve better outcomes and lower costs. Forty-four states had one or more delivery system or payment reform initiatives in place in FY 2019 (most often patient centered medical homes or ACA Health Homes) with 14 states adding or expanding such reforms in FY 2020.

The number of states reporting benefit expansions (23 in FY 2019 and 28 in FY 2020) continues to significantly outpace the number of states reporting benefit restrictions (4 in FY 2019 and 2 in FY 2020). The most common benefit enhancements reported were for mental health/substance use disorder (SUD) services, but other service expansions include dental services, pregnancy and postpartum benefits, and diabetes prevention and care. Eleven states reported policies to eliminate or reduce a cost-sharing requirement for FY 2019 or FY 2020, compared to five states that reported new or increased cost-sharing requirements.

Nearly all states in FY 2019 (48 states) and in FY 2020 (47 states) are employing one or more strategies to expand the number of people served in home and community-based settings. Of these states, the vast majority report using home and community-based services (HCBS) waivers and/or state plan options (i.e., 1915(c), Section 1115, 1915(i), and 1915(k)) to serve more individuals in the community. As of July 1, 2019, 25 states covered LTSS through one or more capitated managed care arrangements, and another two states operated managed fee-for-service LTSS models.

A strong economy and state revenue growth allowed most states to implement and plan more fee-for-service (FFS) provider rate increases for FY 2019 (50 states) and FY 2020 (45 states). This holds true across all major provider types. As more states increasingly rely on capitated managed care, however, FFS rate changes are a less meaningful measure of provider payment unless the state establishes MCO payment requirements. Nearly half of MCO states reported doing so: 19 states reported mandating minimum provider reimbursement rates in their MCO contracts for inpatient hospital, outpatient hospital, or primary care physicians and 17 states reported requiring MCOs to change provider payment rates in accordance with FFS payment rate changes for one or more of these provider types. As in prior years, all states except Alaska rely on provider taxes and fees to fund a portion of the non-federal share of the costs of Medicaid. Six states indicate plans for new provider taxes in FY 2020.

While national attention on health care is focused on broader debates involving prescription drug pricing and the presidential candidates’ health plans, states continue to administer and make changes to Medicaid programs, adapting to state budget and policy priorities as well as new federal Medicaid options. When asked about key priorities for state Medicaid programs, over half of states reported that delivery system and payment reforms are a key priority. A number of states also pointed to developing and implementing demonstration waivers as well as controlling Medicaid costs as key areas of focus. States are also pursuing a broad range of policies to help address increased Medicaid demands associated with an aging population.

When asked about potential for Medicaid block grant waivers, only a limited number of states expressed interest in such an option, particularly since CMS guidance on such policies has not been released. When asked about potential challenges or opportunities related to federal or state-level coverage expansions such as Medicare-for-All, few states had assessed the implications for state Medicaid programs of these broader health reforms. At the time of the survey, litigation challenging the ACA was pending before the U.S. Court of Appeals for the 5th Circuit that could have complex and far-reaching consequences for Medicaid and the entire health care system if the ACA is overturned. Looking ahead, the trajectory of the economy, the direction of federal policies around Section 1115 Medicaid waivers, and the focus of the debate and attention to health care issues in the lead up to the November 2020 elections will also be factors that continue to shape Medicaid in FY 2020 and beyond.

Pulling together this report is a substantial effort, and the final product represents contributions from many people. The combined analytic team from the Kaiser Family Foundation and Health Management Associates (HMA) would like to thank the Medicaid directors and Medicaid staff in all 50 states and the District of Columbia. In a time of limited resources and challenging workloads, we truly appreciate the time and effort provided by these dedicated public servants to complete the survey, to participate in structured interviews, and to respond to our follow-up questions. Their work made this report possible. We also thank the leadership and staff at the National Association of Medicaid Directors (NAMD) for their collaboration on this survey. We offer special thanks to Jim McEvoy at HMA who developed and managed the survey database and whose work is invaluable to us.