Who are the Remaining Uninsured?

Although many previously uninsured Californians gained coverage since the health care law went into effect, 27 percent report that they do not currently have health insurance. Many of these remaining uninsured had little interaction with the health insurance system in the years prior to the ACA implementation. Nearly four in ten of the remaining uninsured reported in the baseline survey that they had been without health insurance for two or more years (39 percent), and an additional 41 percent said they have never had insurance. Seventeen percent of the remaining uninsured are between the ages of 19 and 26 and therefore may be eligible to be covered through a parent or guardian’s health plan — if their parents have health insurance. However, the largest share are individuals between the ages of 30 and 39 (33 percent), followed by those between the ages of 40 and 49 (22 percent). Hispanics make up two-thirds of the remaining uninsured. Though half of them (33 percent of all remaining uninsured) are likely undocumented immigrants who are not eligible for Medi-Cal or assistance through Covered California. Many report a family income that makes them likely eligible for Medi-Cal (27 percent) or for financial assistance through Covered California (30 percent), while 41 percent are likely undocumented and therefore are ineligible.1 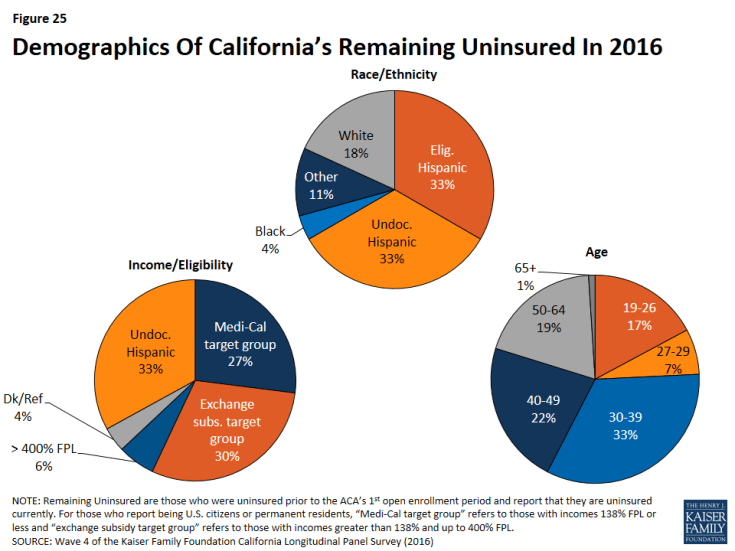 Why Don’t They Have Insurance?

When asked to say in their own words the main reason why they do not currently have health insurance, 47 percent of California’s remaining uninsured say it is because health insurance is too expensive or they can’t afford it. Affordability is by far the most common reason named for lacking health insurance, followed by eligibility reasons (19 percent), such as immigration concerns (10 percent) or the fact that they believe they are ineligible for Medi-Cal or government help (4 percent). One in ten say they haven’t tried to get insurance, they don’t need insurance, or they just haven’t gotten around to it, and about one in ten (9 percent) name application-process-related issues as the main reason. Small shares say other reasons such as unavailability (2 percent) — including that their employer doesn’t offer coverage (1 percent), unemployment (2 percent), and opposition to the health care law (2 percent). 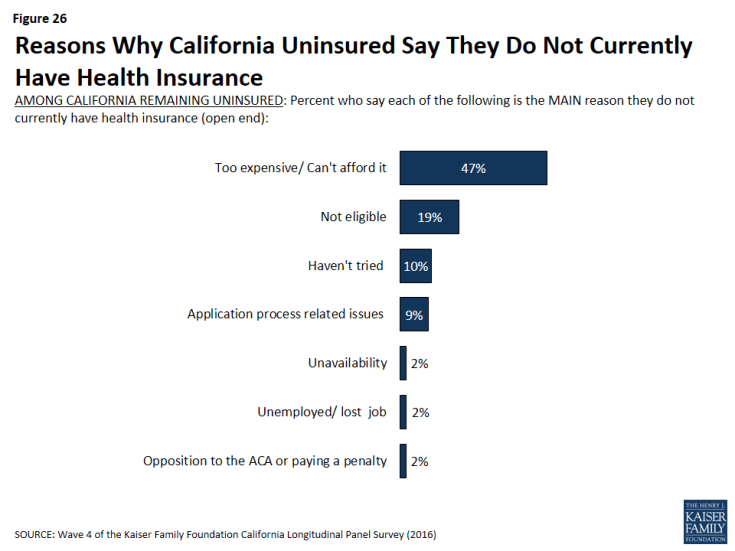 Figure 26: Reasons Why California Uninsured Say They Do Not Currently Have Health Insurance

Did They Try To Get Insurance?

Slightly more than one-third (36 percent) of California’s remaining uninsured say they tried to get health insurance in the past 6 months.  Those who tried but did not gain health insurance point to cost as a main reason they were unsuccessful. About a quarter (27 percent) of California’s remaining uninsured say they tried but didn’t get insurance because it was too expensive, including 19 percent who say they shopped for health insurance and 7 percent who say they didn’t bother shopping because they didn’t think they could afford it. Another 15 percent say they weren’t eligible for coverage, and less than one in ten (7 percent) say they were not able to complete the application process. 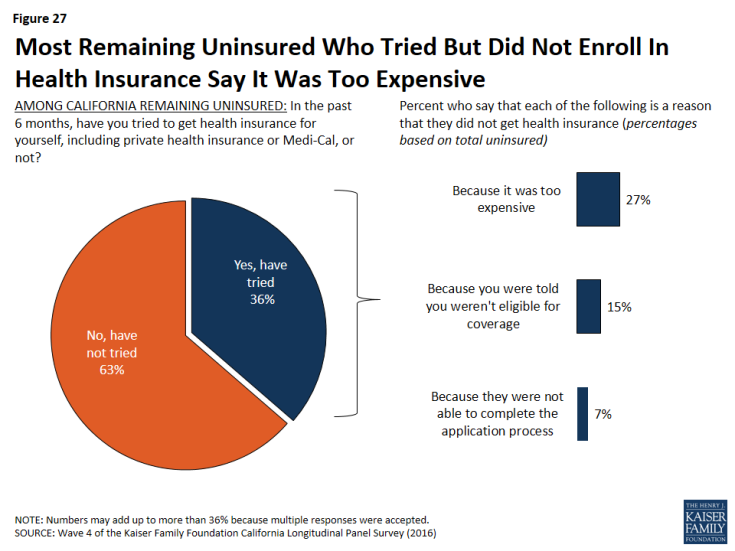 Figure 27: Most Remaining Uninsured Who Tried But Did Not Enroll In Health Insurance Say It Was Too Expensive 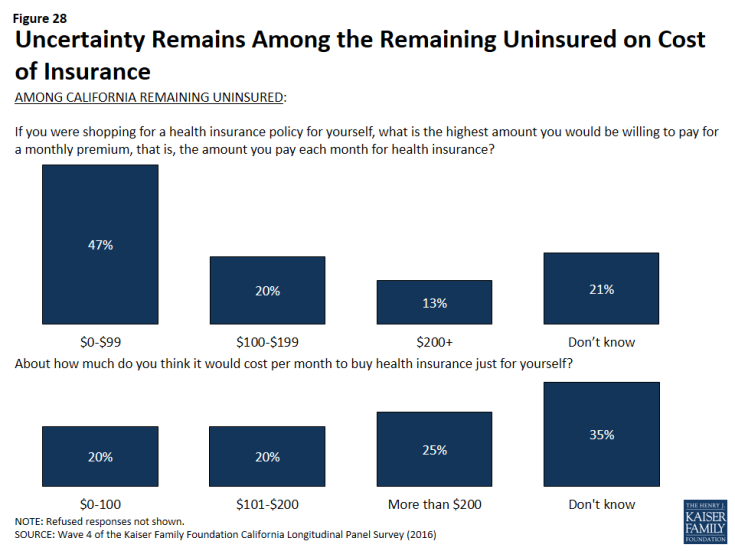 Figure 28: Uncertainty Remains Among the Remaining Uninsured on Cost of Insurance 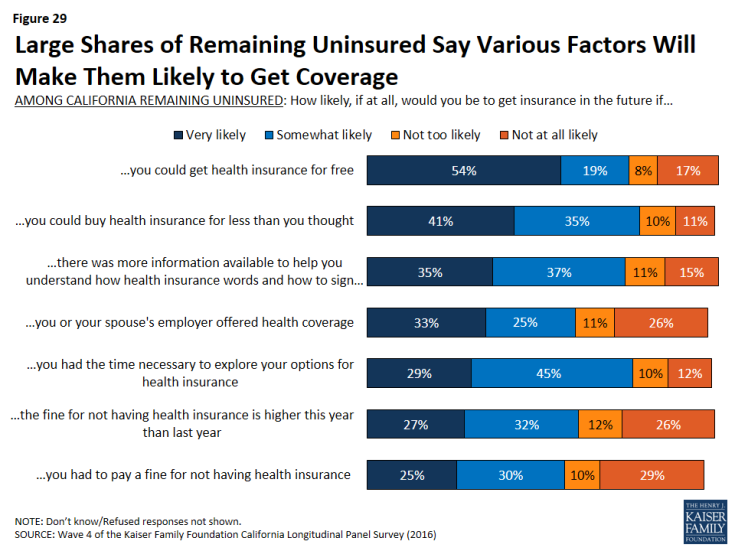 Figure 29: Large Shares of Remaining Uninsured Say Various Factors Will Make Them Likely to Get Coverage

A large share (83 percent) of the remaining uninsured in California are aware of the health care law’s requirement that most Americans have health insurance or pay a fine, and most (54 percent) think that the requirement applies to them but more than one-third (37 percent) say the requirement does not apply to them.

Smaller shares of the remaining uninsured are aware of provisions of the health care law, beyond the requirement to have coverage, intended to expand coverage to the uninsured and those with lower incomes. Just over half know that the law allowed for the expansion of the Medi-Cal program to cover more low-income Californians (54 percent), and half (49 percent) know that the law provides financial help to low- and moderate-income people to help them purchase health insurance coverage. 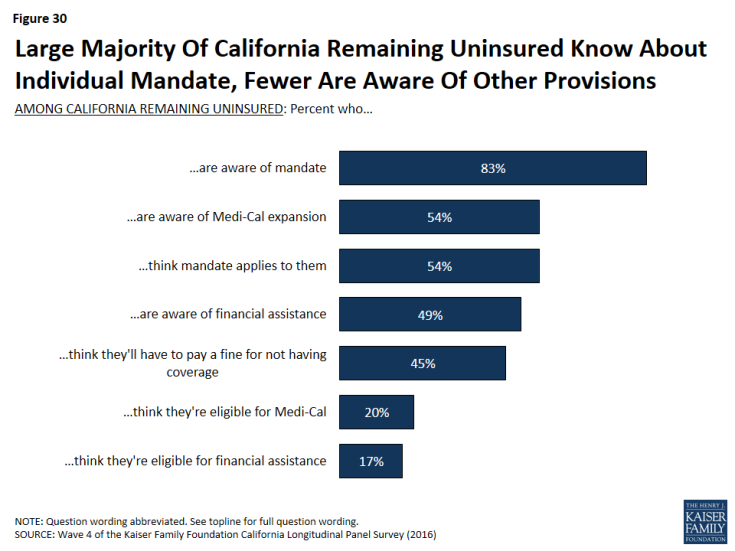 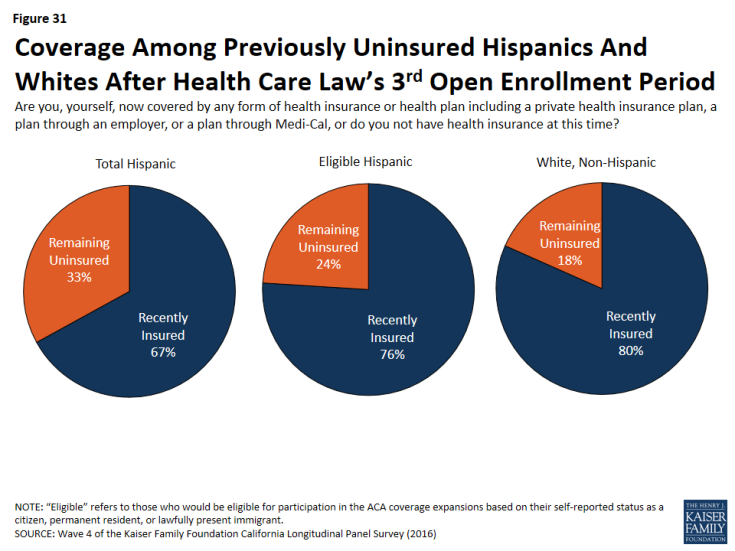 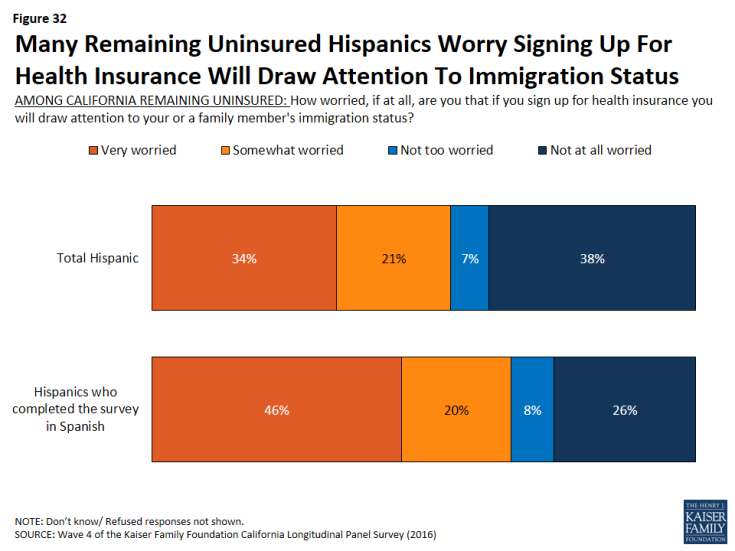 In fact, concerns about immigration status exist for all California’s remaining uninsured who were born in another country —  both Hispanics and non-Hispanics. One-fourth (27 percent) of California’s remaining uninsured worry that they or a family member could be deported if they sign up for health insurance. In addition, 50 percent of all uninsured who were born in another country worry that signing up for health insurance could hurt their ability to become a U.S. citizen. 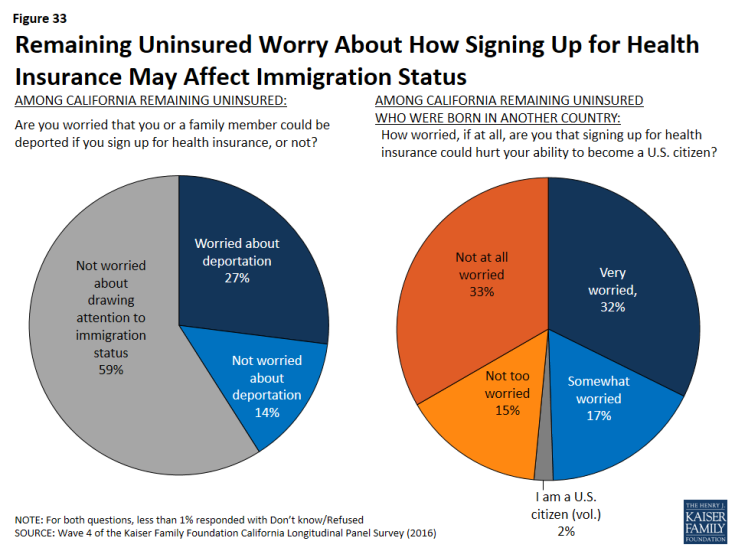 Figure 33: Remaining Uninsured Worry About How Signing Up for Health Insurance May Affect Immigration Status

Navigating health insurance options and health care jargon can be confusing, and adding language differences to the equation has the potential to be an even bigger barrier to enrollment. However, Californians currently without health insurance who prefer to communicate in Spanish give largely positive feedback when asked how much information is available in Spanish and whether there are people in their community trained to help them sign up for insurance in Spanish. Most (65 percent) remaining uninsured Spanish speakers say that, in their experience, there is at least some information about signing up for insurance available in Spanish – about four in ten (39 percent) say there is a lot of information available and another 26 percent say there is some information available. There is still room for improvement though, as a third of Spanish-speaking remaining uninsured Californians report that there is only a little information available in Spanish (24 percent) or say that there is none available at all (7 percent). Six in ten Spanish-speaking uninsured report there are people in their community trained to help them sign up (compared to 72 percent in 2015), while one-third (35 percent) say that there are not people in their community trained to help and 6 percent say they do not know. 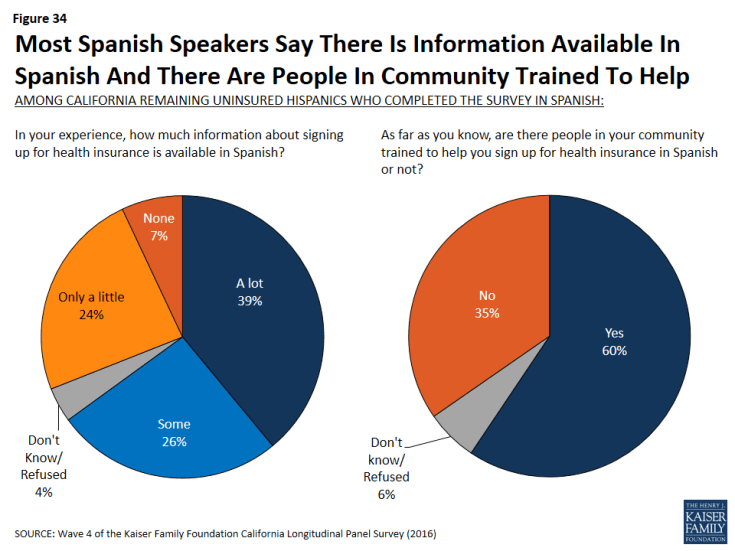 Figure 34: Most Spanish Speakers Say There Is Information Available In Spanish And There Are People In Community Trained To Help