Prior to the pandemic, 7.3 million uninsured people were eligible for Medicaid. Nearly two-thirds of these people are children (27%, or 2.0 million) or adults (38%, or 2.8 million) living in the 36 states in which the ACA Marketplace is federally-operated (FFM) or state-operated but the state uses the federal Healthcare.gov platform (SBM-FP) and will reopen for enrollment under the executive order (Figure 1). During 2020, all but one of the State-based Marketplace (SBM) states reopened Marketplace enrollment due to the pandemic. In response to the reopening of the federal Marketplace, 11 of the 15 SBM states have announced similar enrollment periods. 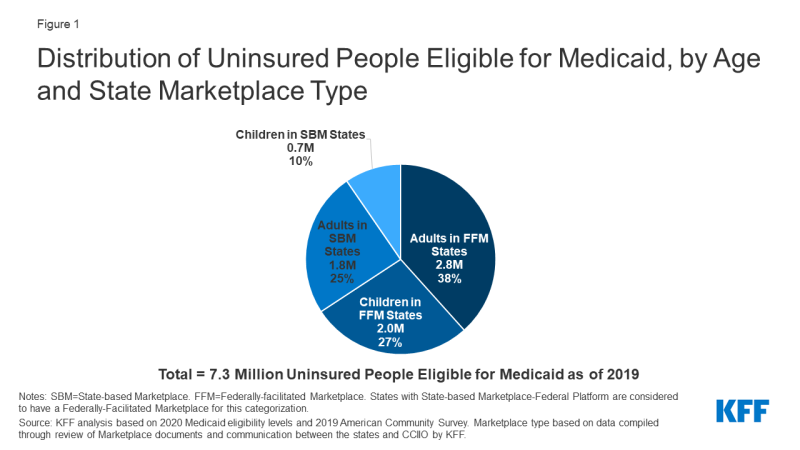 Under enrollment simplification processes established by the ACA, states must provide a single application for Medicaid, CHIP, and Marketplace coverage, thereby establishing a “no wrong door” application process for ACA coverage. This process means that the Marketplaces will screen or assess individuals’ eligibility for all health coverage programs, including Medicaid and CHIP, and individuals will be enrolled in or referred to the program for which they are eligible regardless of how they apply. Most states utilizing the FFM do not authorize the FFM to make final Medicaid eligibility determinations for most groups, but instead conduct full eligibility determinations for individuals after the FFM assesses them as eligible for Medicaid. The states that operate SBMs typically have a single integrated system through which individuals can apply for and renew Medicaid, CHIP and Marketplace coverage.

Investments in outreach and advertising as well as enhanced funding for in-person assistance to support the new Marketplace enrollment period can also raise awareness of Medicaid and promote Medicaid enrollment. Findings from a consumer survey reveal most people are unaware of ACA-related coverage options, including whether their state has expanded Medicaid, and lack basic information on how to apply. And, many who do apply for Marketplace or Medicaid coverage face challenges with the application process. Expansive advertising campaigns coupled with targeted outreach strategies during the new enrollment period can educate consumers on the availability of both Marketplace and Medicaid coverage. In addition, supplemental funding for federal navigators would enable them to respond more quickly to provide in-person help to both Marketplace and Medicaid enrollees.

While much attention has been paid to the importance of expanding eligibility to the over 2 million people in the Medicaid coverage gap, who currently have no affordable coverage option, it may be possible to make gains in Medicaid coverage by reaching those who are eligible but not enrolled. Ongoing efforts to expand ACA Marketplace coverage may reach some of these individuals.