For the second year, the survey included health insurance brokers who were certified by the Marketplace to help consumers apply for non-group coverage.  Most, though not all state Marketplaces provided contact information for at least some of their certified brokers.  As a result, survey findings may not reflect experiences generalizable to the nation as a whole.

Virtually all (92%) of brokers who sold non-group coverage in the Marketplace this year had done so last year and 84% were registered with the Marketplace during the first Open Enrollment period. 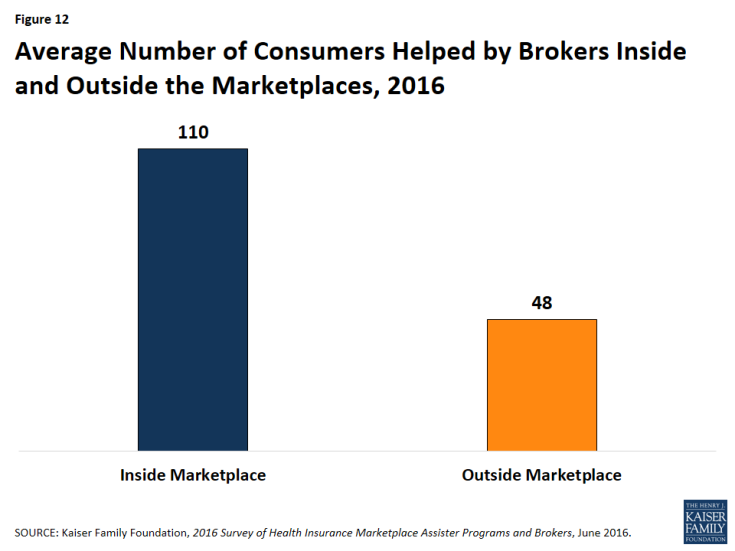 Figure 12: Average Number of Consumers Helped by Brokers Inside and Outside the Marketplaces, 2016

Some brokers were busier than others.  Most (56%) said they helped up to 50 Marketplace consumers during this Open Enrollment period, while 26% of brokers said they helped more than 100.  In Medicaid expansion states, brokers helped an average of 94 people enroll in Marketplace plans during Open Enrollment; in non-expansion states, the average was 138.  These findings are similar to what brokers reported last year.

Though we cannot make estimates of the number of consumers helped by brokers nationally due to methodological limitations, brokers clearly play a significant role in helping consumers to enroll in Marketplace coverage.  For example, the California Marketplace reported last year that 43% of new enrollees in 2015 were broker-assisted.1 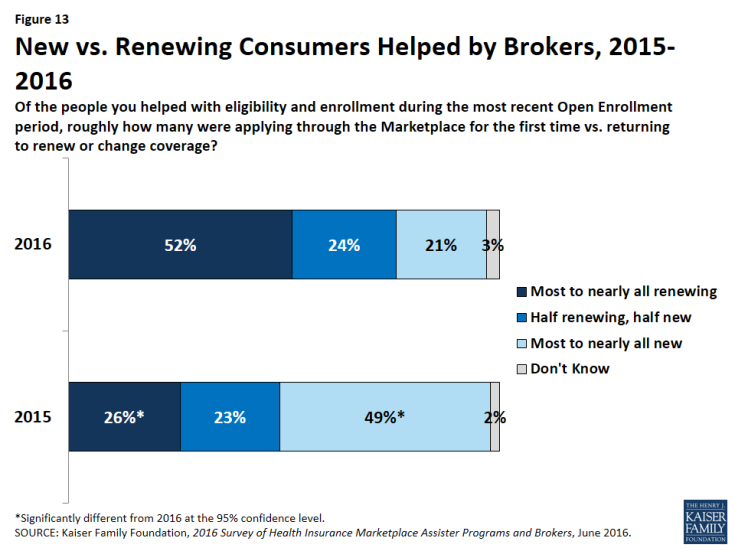 In addition, this year, brokers say fewer consumers were uninsured at the time they sought help.  Thirty percent of brokers this year said most or nearly all consumers they helped were uninsured, compared to 50% last year (Figure 14). 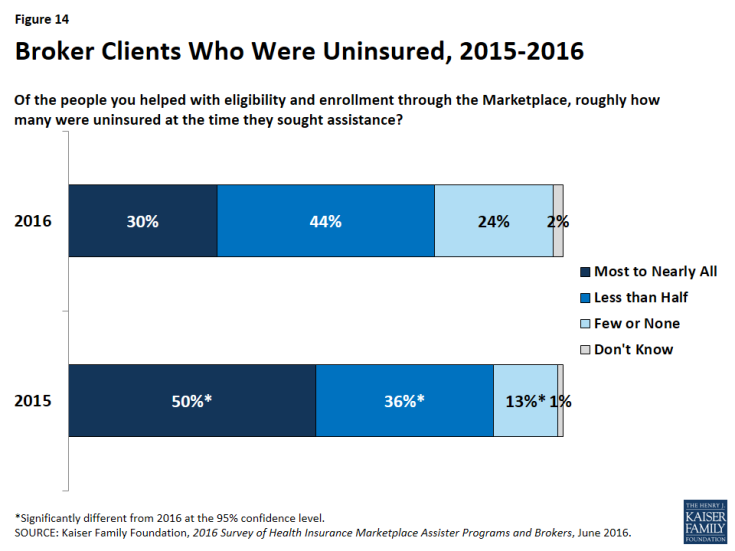 Enrollment assistance was also time intensive for brokers.  Like Assister Programs, brokers reported it took, on average, 1 to 2 hours to help a new Marketplace consumer enroll in coverage, and just over an hour to help a returning consumer.  On average, brokers encountered 8 clients with identity proofing problems during Open Enrollment. Similar to Assister Programs, brokers in SBM states were twice as likely to report these problems could be resolved quickly during the initial visit (28%) compared to brokers in FFM states (14%).  Also, brokers reported 12 clients, on average, encountered DMI problems related to immigration and 21 clients, on average, encountered DMI problems related to income.  Even more often than Assister Programs, brokers said that Marketplace DMI notices were unclear; 54% said immigration DMI notices were unclear most or nearly all of the time, 60% said this about DMI income notices.

Similar to Assister Programs, 27% of brokers said that for OE3 overall, they were unable to help all who asked for it and had to turn at least some consumers away.  Brokers were much more likely to say that demand exceeded their capacity in early December, just prior to the deadline for selecting or renewing coverage for January 1. Thirty-one percent of brokers found it hard to serve all consumers during this surge period, compared to 17% who said demand for help exceeded their capacity during the final two weeks of Open Enrollment.

Like last year, brokers generally engaged in similar consumer assistance activities as Assister Programs, but with emphasis on different services.  For example, the vast majority of both brokers and Assister Programs said they help consumers compare and select QHPs, apply for premium tax credits, and resolve post-enrollment problems.  But as was also the case last year, compared to Assister Programs, brokers were less likely to engage in outreach and public education activities (40% vs 76%) and less likely to help consumers apply for exemptions from the individual mandate (24% vs 50%).  Compared to Assister Programs brokers were more likely to help small businesses select coverage (29% vs 4%).

Compared to Assister Programs, when clients received a notice of data match inconsistency from the Marketplace, brokers were somewhat less likely to help the consumer; 76% said they will help consumers resolve immigration-related DMI, compared to 89% of Assister Programs.  Brokers were also less likely, compared to Assister Programs, to help individuals eligible for Medicaid and CHIP (47% vs 89%).  Brokers who said they helped consumers with Medicaid applications were more likely to be from SBM states, where Marketplace eligibility systems are better integrated with Medicaid.

Also similar to Assister Programs, most brokers said they would like to receive additional training on a range of topics, including tax related issues, Marketplace appeals and renewal procedures, Medicare, and Medicaid.

Similar to Assister Programs, brokers overwhelmingly said consumers they helped had limited understanding of the ACA and limited health insurance literacy.  In other respects, though, broker clients differed somewhat from consumers served by Assister Programs.  For example,

Brokers also were more likely than Assister Programs (64% vs 40%) to say most of the consumers they helped this year were people whom they had also helped during the previous Open Enrollment period.

Use of Alternative Enrollment Channels

This year we asked brokers about their use of Marketplace websites vs. alternative enrollment channels when helping clients apply for Marketplace health plans.  Federal regulations permit direct enrollment by individuals through insurance company websites into the Marketplace health plans they offer, and also through private web broker sites which are required to display all qualified health plans offered in the Marketplace.  Permitting direct enrollment into QHPs through these alternative channels was adopted with intent of maximizing public awareness and enrollment opportunities and to encourage technological innovations such as plan compare tools and apps for mobile devices.  State Marketplaces can decide whether to allow enrollment into QHPs through insurance company or web broker sites; the FFM allows use of these alternative enrollment channels.

Alternative enrollment channels must meet federal standards for accuracy and completeness of health plan information.  Alternative enrollment channels may also market other products that are not QHPs (for example, supplemental policies, accident-only policies, dread-disease policies); those that do must clearly distinguish non-QHP products from QHPs and indicate that federal premium and cost sharing subsidies only apply to QHPs.  In addition, alternative enrollment channels in the federal Marketplace must follow other standards.  All insurance companies that sell plans on the FFM have the capability of enrolling consumers directly on their own website.  According to CMS staff, fewer than two dozen web broker sites have been certified and are actively used in FFM states currently.2  To be certified, sponsors of these sites must complete training similar to that required of brokers and attest to CMS that their site meets all other standards.

In FFM states, consumers (or their brokers) who enroll through alternative channels enter information about themselves, their dependents, income.  Then they are re-directed to healthcare.gov which determines eligibility to participate in the Marketplace and for subsidies.  Finally, consumers are re-directed back to the alternative enrollment site where they can view the resulting net cost of health plan options, select a plan, and enroll. 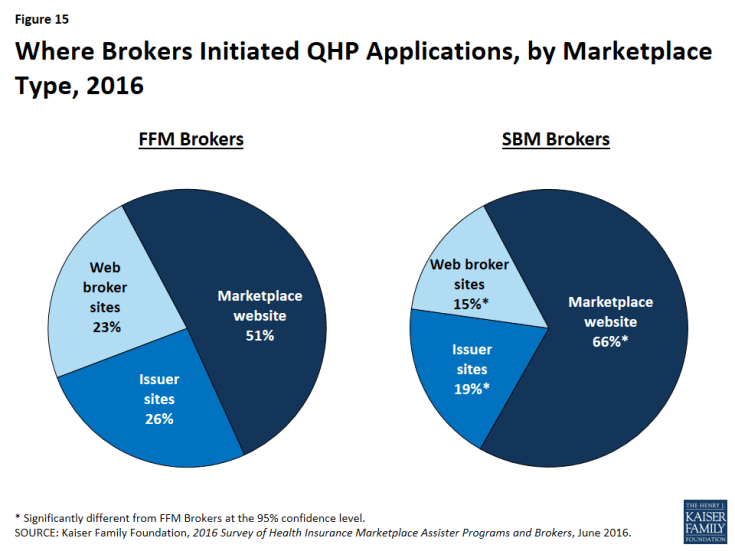 Some survey participants volunteered additional information about the pros and cons of using alternative enrollment channels.  Some noted technical and functionality advantages of alternative enrollment channels they used.  For example, some web broker sites provide a dashboard to track client accounts.  Ease of data entry was also mentioned as an advantage in some alternative enrollment channels; for example, some alternative channels provide a single screen to enter data on all family members, compared to healthcare.gov which requires data entry on separate screens for each household member.  Some alternative channels permit consumers to apply even if they do not have an email address. By contrast, healthcare.gov requires consumers to provide an email address to open an account, and this is burdensome for some consumers who do not have internet at home.  Brokers also said they sometimes started applications on other channels when the FFM site was functioning slowly, or vice versa.

Several mentioned one disadvantage of using alternative enrollment channels, namely that when an application is started off healthcare.gov, the consumer does not have an account created on the FFM site. Without an account, consumers can’t access the healthcare.gov Message Center, for example, where important updates about requests for additional documentation and other information are posted and easily accessible. Another broker observed that, without a healthcare.gov account, consumers who need to report mid-year changes can only submit them by phone to the call center.

Finally, some brokers noted that some alternative channels also sell non-QHP products and can provide quotes for these products along with the QHP.  A few said that they sell a significant volume of accident-only policies, cancer policies, short term policies, and other excepted benefit products to consumers who feel they need added protection from high cost sharing under QHPs.   Excepted benefit policies are not required to follow ACA market rules, such as the prohibition on pre-existing condition exclusions.  Currently, CMS does not require alternative channels to report data on non-QHP products sold to QHP enrollees.  Staff say they are working on improved ways to monitor the sale of QHP products through alternative enrollment channels.3

More often, brokers reported insurers were terminating or reducing commissions for policies sold to people eligible for SEP.  Insurers report that SEP enrollees have higher health claims on average than people who sign up during Open Enrollment, and therefore want to discourage use of SEPs.6  Sixty percent of brokers said at least some insurers have stopped paying commissions on Marketplace policies sold outside of Open Enrollment.  One-third reported most or all insurers have stopped paying SEP commissions for Marketplace policies (Table 8).

Changes in SEP commissions appear to be taking place more often in FFM states than in SBM states.  Nearly half of brokers in FFM states (46%) reported most or all insurers they regularly do business with have ended commissions on SEP policies, compared to 10% of brokers in SBM states.  Twenty-nine percent of FFM brokers reported no insurers have ended SEP commissions on Marketplace policies, compared to 61% of SBM brokers. So far, authorities in several SBM states have prohibited such broker commission reductions.  The Connecticut Insurance Department ruled against United’s action for 2016 on grounds that broker commissions had been incorporated into health plan rate filings the state had already approved.7  Colorado’s regulator ruled that elimination of broker commissions on certain policies, including SEP policies, would constitute discrimination and an unfair marketing practice.8 The Kentucky Department of Insurance issued an advisory opinion that failure to pay agent commissions in accordance with filed rates would be a violation of the Insurance Code.9  The California Marketplace is considering new requirements for participating insurers to pay the same commission rates for all their policies year round.10

In other states, including those directly regulated by CMS, which have not blocked commission modifications, the effect on access to coverage remains to be seen.  Some agents who volunteered information after the survey said they would continue to help SEP-eligible consumers enroll in major medical health plans, even if they aren’t paid a commission, because it’s the right thing to do and because they hope consumers will ask for help renewing coverage at the next Open Enrollment, when commissions would apply.  Others said they would consider selling short-term non-renewable policies to SEP-eligible consumers instead.