Section 4: Approaches to Aid and Reasons for U.S. to Spend

Perhaps related to the sense that the U.S. is already bearing more than its fair share of the burden, Americans continue to prefer multilateral approaches to global health aid. More than six in ten (63 percent) say that when giving aid to improve health in developing countries, “it is best for the U.S. to participate in international efforts, so that other countries will do their fair share and these efforts will be better coordinated,” while half as many (30 percent) say it is best for the U.S. “to do so on its own, so that the U.S. has more control over how money is spent and will get more credit and influence in the country receiving aid.” 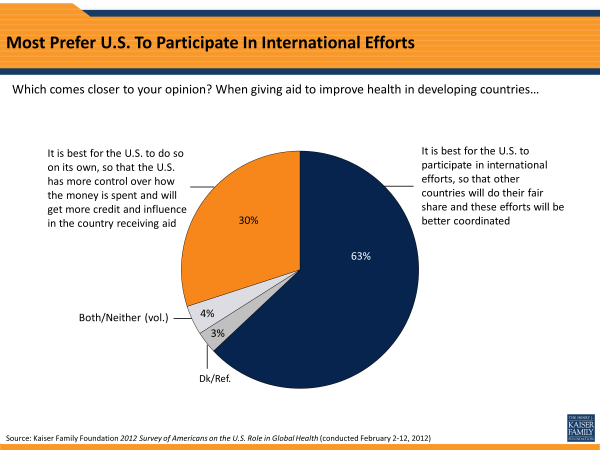 In another show of support for coordinated, multilateral efforts, large shares say that the U.S. should give money to international organizations. Support is high regardless of whether the specific organizations mentioned in the question are the Global Fund to Fight AIDS, Tuberculosis and Malaria (73 percent say we should give money) or the United Nations and the World Health Organization (71 percent). Two-thirds (67 percent) also think the U.S. should give directly to U.S.-based non-profits operating programs in developing countries. The public is somewhat more divided on whether the U.S. should give money directly to local non-profits that are based in developing countries and not in the U.S. (42 percent say we should, 47 percent say we shouldn’t). And about half (51 percent) would prefer the U.S. not give directly to religious or faith-based organizations, while just over a third (38 percent) say we should. Perhaps not surprisingly, Evangelical Christians (50 percent) and those who place a strong personal importance on religion (53 percent) are more likely than others to favor giving to faith-based organizations. The public comes down clearly against giving money directly to governments in developing countries, with 67 percent saying we should not. 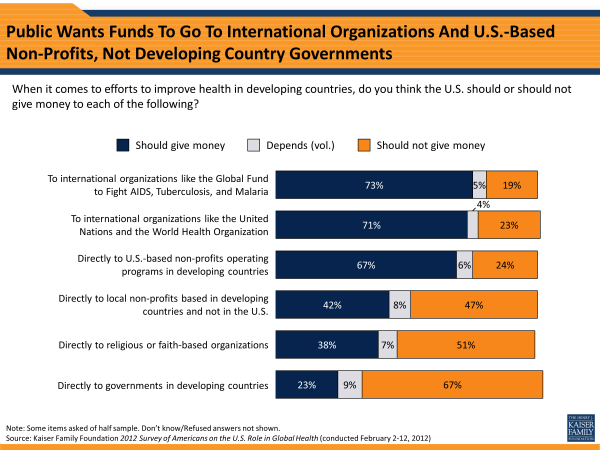 While majorities across political party affiliation support multilateral approaches to aid, there are some measurable partisan differences in attitudes in this area. Though it is a minority view across all parties, a larger share of Republicans (37 percent) compared with Democrats (24 percent) say it is better for the U.S. to give aid on its own, in order to retain control over how money is spent and receive more credit in the countries receiving aid. Republicans (55 percent) are also more likely than Democrats (38 percent) to feel that the U.S. is already contributing more than its fair share to global health efforts compared to other donor countries. And while still a majority, smaller shares of Republicans than Democrats say that when giving money to improve health in developing countries, the U.S. should give money to international organizations like the United Nations, the World Health Organization, and the Global Fund.

Americans See Benefits At Home, But Most Think U.S. Should Give Because It’s The Right Thing To Do

Americans see several clear benefits to the U.S. from engaging in global health efforts. Seven in ten believe that spending money on health in developing countries helps protect the health of Americans at home by preventing the spread of diseases like SARS, bird flu, and swine flu, and nearly six in ten (58 percent) say such spending helps improve the U.S. image around the world. 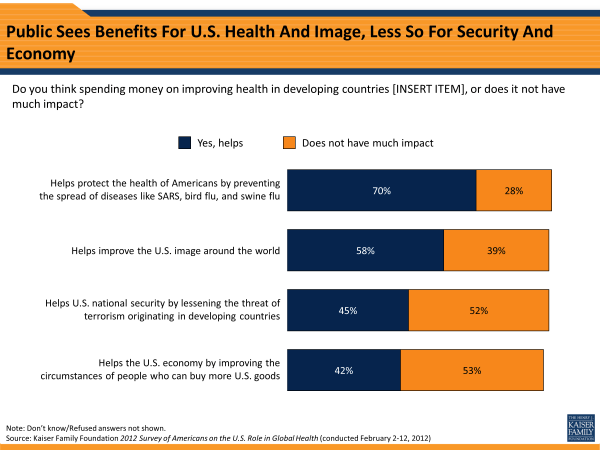 Despite recognizing some potential benefits to the U.S., the moral argument continues to trump such “self-interest” arguments when it comes to reasons for the U.S. to give. Half (51 percent) say the most important reason for the U.S. to spend money on health in developing countries is “because it’s the right thing to do,” while much smaller shares see the top reason as helping the U.S. economy (12 percent), ensuring U.S. national security (12 percent), improving diplomatic relationships (11 percent) or improving the U.S. image in the world (8 percent). 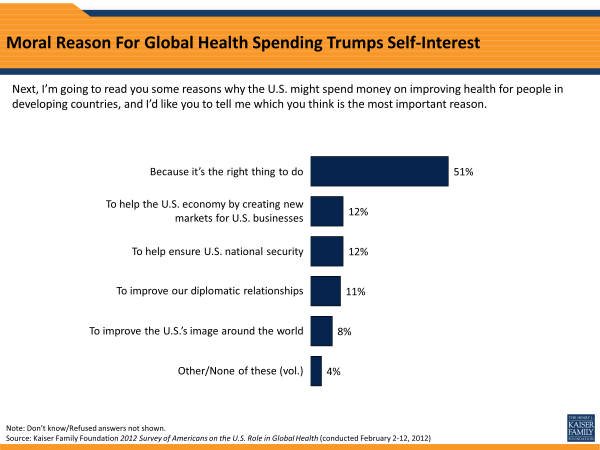