One challenge for those looking to increase the public’s level of support for U.S. spending on global health is that there are some indications that visibility of the issue may have declined somewhat since the summer of 2010. This decline may not be surprising given that 2012 is an election year, and one in which the news has continued to be dominated by the economic problems facing the country. While a majority of the public reports paying at least “some” attention to issues related to health in developing countries, fewer than one in five (18 percent) say they pay “a lot” of attention to these issues. The share saying they pay at least “some” attention is down somewhat, from 75 percent in August 2010 to 68 percent in 2012. 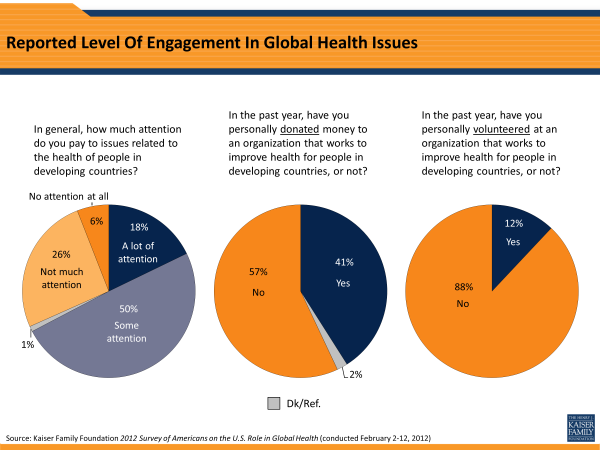 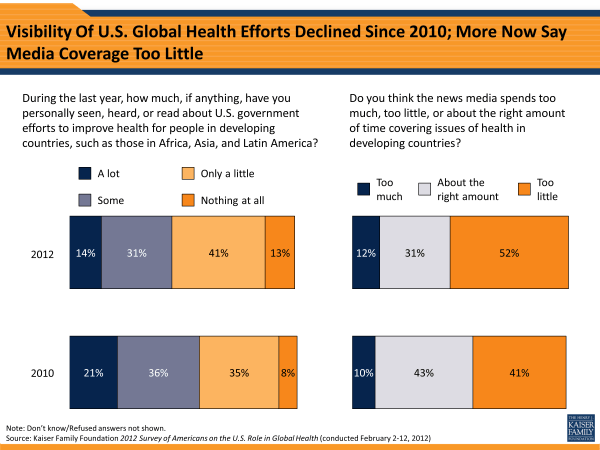 In light of this decline in visibility, the public has become somewhat more likely to say the news media is not devoting enough time to covering issues of health in developing countries. Currently, roughly half (52 percent) say the news media spends too little time on the topic, up from 41 percent in 2010. At the same time, the share who say the media spends about the right amount of time on the issue declined from 43 percent to 31 percent, while about one in ten continue to believe the media devotes too much time to the issue.

While there is a lot of agreement across various demographic groups on questions of U.S. global health policy, some distinct age trends emerge in this survey. Compared with their older counterparts, younger adults are more likely to support increasing U.S. spending on health in developing countries, more optimistic that spending will lead to progress and will bring various benefits to the U.S., and less skeptical about the amount of U.S. global health spending lost through corruption.

At the same time, younger adults are less likely than older Americans to report paying close attention to the issue of health in developing countries, and less likely to report hearing news about U.S. global health efforts in the past year. Just a third (33 percent) of those ages 18-29 say they’ve heard “a lot” or “some” in the past year about U.S. government efforts to improve health in developing countries, compared with six in ten of those ages 65 and older.

Perhaps surprisingly given this low level of visibility, three in ten Americans are able to name a person they think of as a leader in efforts to improve health for people in developing countries. At the top of the list are President Barack Obama (named by 5 percent) and entrepreneur and philanthropist Bill Gates (named by 5 percent, which includes mentions of the Bill and Melinda Gates Foundation), followed by former President Bill Clinton (4 percent). Various other individuals were mentioned by about 1 percent of the public each, including former presidents Jimmy Carter and George Bush, Secretary of State Hillary Clinton, and celebrities such as Oprah Winfrey, Bono, Angelina Jolie, Sean Penn, and George Clooney. 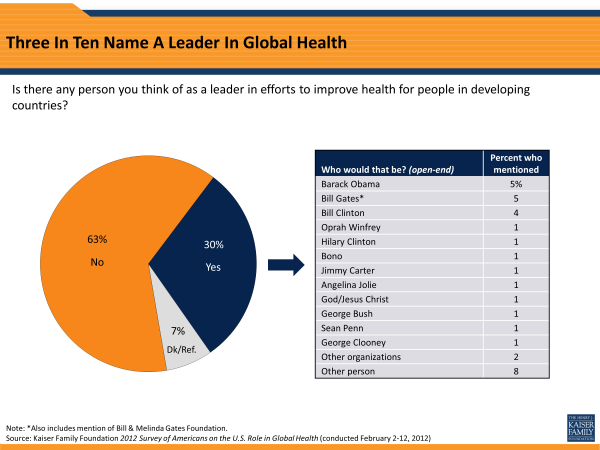 Section 4: Approaches to Aid and Reasons for U.S. to Spend Section 6: Conclusion