Health Among A List Of Priorities The Public Sees For U.S. In World Affairs

When it comes to different ways in which the U.S. might engage in world affairs, issues of safety and security, such as limiting the spread of nuclear weapons (53 percent) and fighting global terrorism (48 percent), top the public’s priority list, closely followed by disaster relief (44 percent). Following this is a cluster of issues seen as top priorities by more than a third of the public, including improving health in developing countries (37 percent), improving education (36 percent), promoting opportunities for women and girls (34 percent), and fighting climate change (34 percent). Almost three in ten place a top priority on reducing poverty in developing countries (29 percent) and promoting global financial stability (27 percent), while fewer prioritize promoting democracy (17 percent) and providing military assistance to developing countries (9 percent). 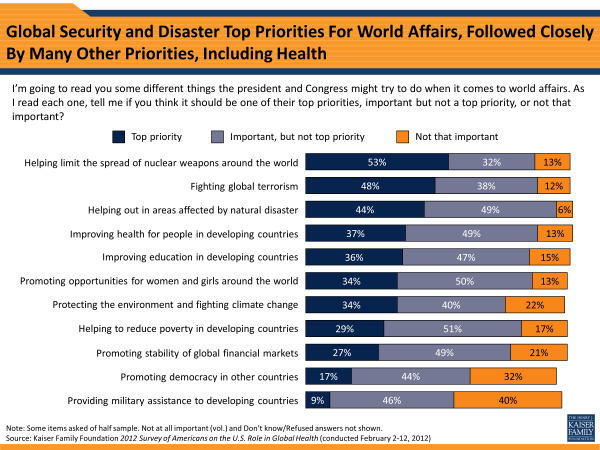 When asked about a variety of different priorities for U.S. efforts to improve health in developing countries, large majorities believe each area is important, and between a quarter and two-thirds say each should be “one of the top” priorities. 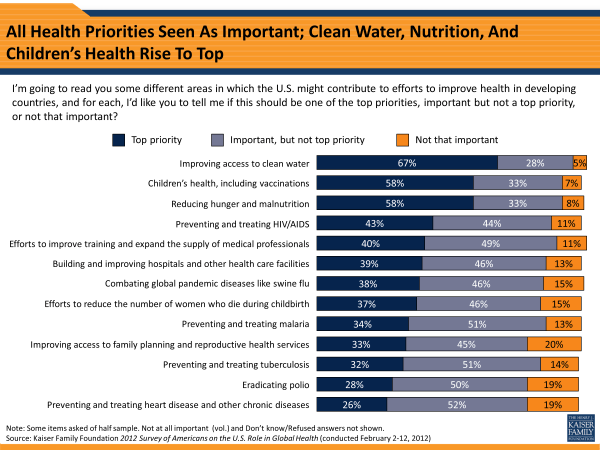 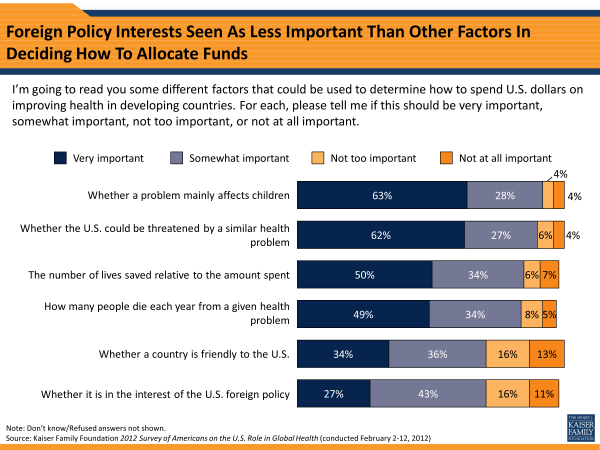 In terms of which criteria should be used to determine allocation of U.S. spending on health in developing countries, the public ranks two factors at the top of the list: whether a problem mainly affects children, and whether the U.S. could be threatened by a similar health problem (six in ten say each of these should be “very important” in determining how U.S. dollars are spent). Roughly half also say “the number of lives saved relative to the amount spent” and (50 percent) “how many people die each year from a given health problem” (49 percent) should be very important criteria. U.S. foreign policy concerns rank lower on the list, with about a third (34 percent) placing great importance on whether a country is friendly to the U.S., and just over a quarter (27 percent) saying the same about whether it is in the interest of U.S. foreign policy.

When it comes to the problems Americans perceive to be facing developing countries, hunger and lack of food top the list in an open-ended question (28 percent), followed by health and disease (15 percent), economic problems (12 percent), government corruption (12 percent), and poverty (11 percent). Hunger is also top-of-mind for many people when it comes to health specifically. When asked to name the most urgent health problems facing developing countries, HIV/AIDS (28 percent) and hunger/malnutrition (26 percent) are at the top of the list, followed by access to health care (14 percent), clean drinking water (12 percent), and obesity/lack of good nutrition (12 percent). 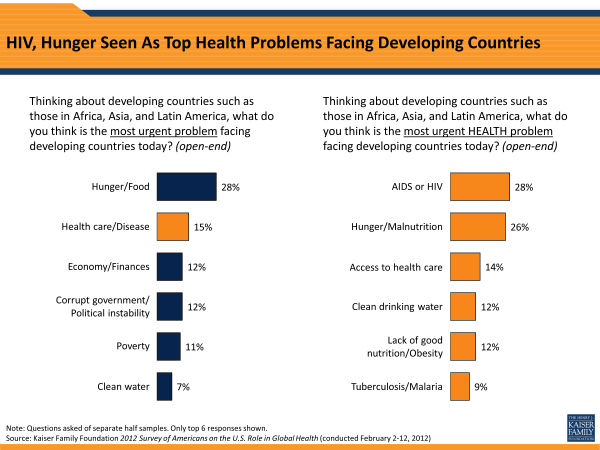 While HIV/AIDS continues to be at the top of the list of health problems perceived as most urgent for developing countries, the share mentioning HIV fell from 44 percent in 2010 to 28 percent in 2012. When asked more specifically how they view the HIV/AIDS epidemic in developing countries and the U.S. response, six in ten Americans (62 percent) say HIV/AIDS is “just one of many problems around the world that the U.S. and other wealthier countries must consider when deciding how to allocate resources,” while about half as many—32 percent—view it as “a global emergency requiring a special funding effort by the U.S. and other wealthier countries, regardless of other problems that exist.” 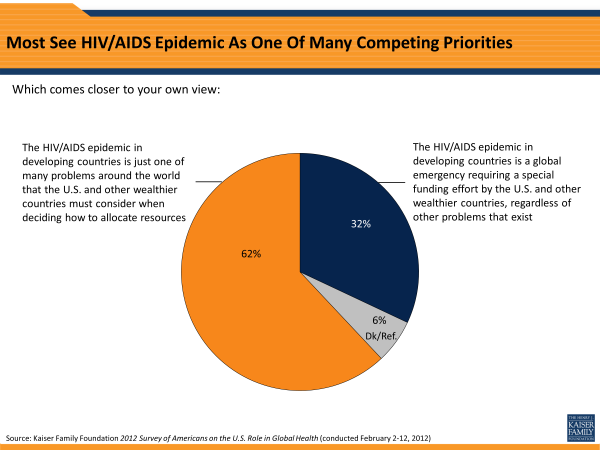