Section 1: Foreign Aid and the U.S. Role in the World

Most See A Strong Role For The U.S. In The World, But Confusion About Foreign Aid Spending Persists

A solid majority of the public (60 percent) want the U.S. to play at least a “major” role in world affairs, but just 17 percent want the U.S. to play the “leading” role. Fewer than four in ten would prefer to see our country play only a minor role (26 percent) or no role at all (11 percent) in solving international problems. 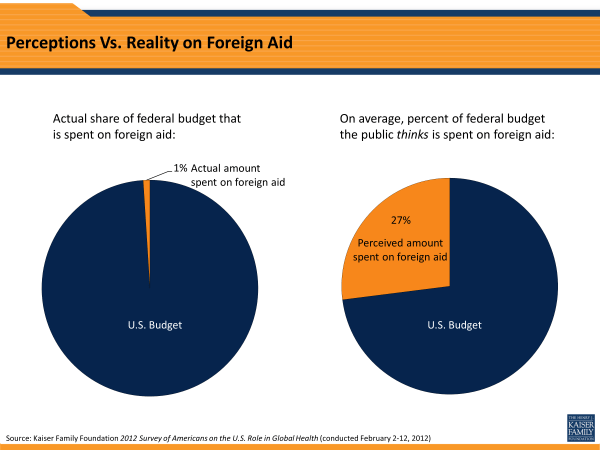 At the same time as they overestimate the amount of foreign aid spending, a majority of the public (54 percent) thinks the U.S. is now spending too much on foreign aid, and just 17 percent say we are spending too little, a finding that is consistent with previous Kaiser surveys. However, in this survey we took the additional step of giving respondents accurate information by telling them that about one percent of the federal budget is spent on foreign aid, and we found that this information has the potential to shift opinion dramatically. After hearing this information, the share saying the U.S. spends too little on foreign aid more than doubles, from 17 percent to 36 percent, while the share saying we spend too much drops in half, from 54 percent to 24 percent. Another three in ten think that one percent is about the right amount for the U.S. to be spending on foreign aid.3 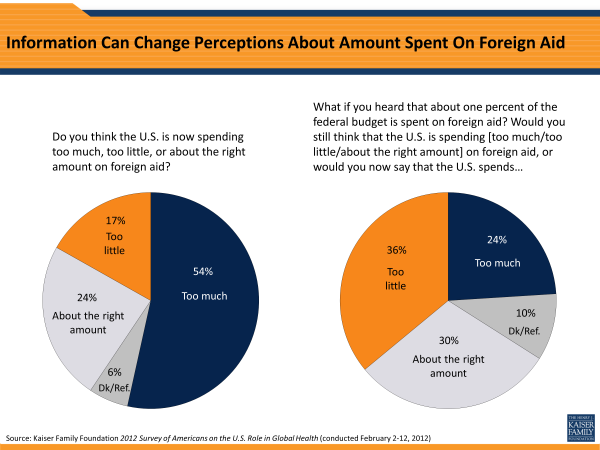 Framing Matters In Public Perception Of Aid Spending, With More Support for Spending On “Improving Health” Versus “Foreign Aid”

Perceptions—and misperceptions—about the amount of foreign aid spending may also be related to the public’s beliefs about what this money is spent on. When asked to name in their own words the types of things U.S. foreign aid pays for, military support is near the top of the list, tied with health care at 21 percent, and just behind food (31 percent). Other common responses include diplomacy, basic needs such as clothing and shelter, disaster relief, and education. When the question is framed around U.S. spending “to help developing countries” rather than “foreign aid,” food remains at the top, but responses related to health care and education move further up the list, while fewer people mention military aid (10 percent). 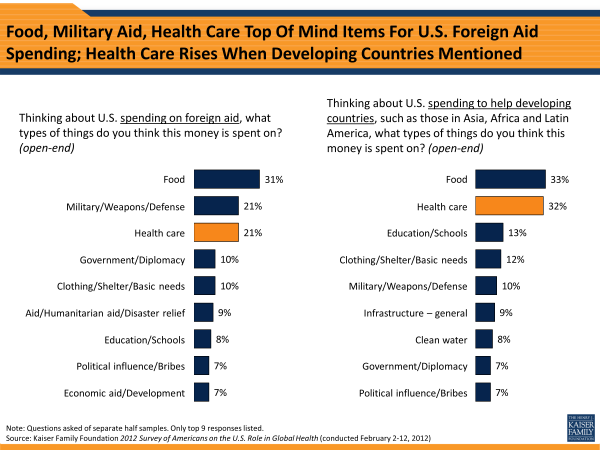 There is some evidence that these top-of-mind perceptions of how aid is spent are tied to people’s level of support for foreign aid spending. For example, those who think the U.S. spends too much on foreign aid are less likely to mention things like food and health care, and more likely to mention diplomacy and bribes/using money to gain political influence.

Framing also matters when it comes to how the spending question is asked. Kaiser surveys have consistently found that Americans are more likely to support U.S. spending for global health specifically than they are when asked about foreign aid in general. While most don’t possess accurate knowledge about the actual amount of U.S. spending, when asked their own perceptions, a majority of the public says the U.S. is now spending too little (32 percent) or about the right amount (34 percent) on efforts to improve health for people in developing countries, while about one in five (21 percent) say we are spending too much. 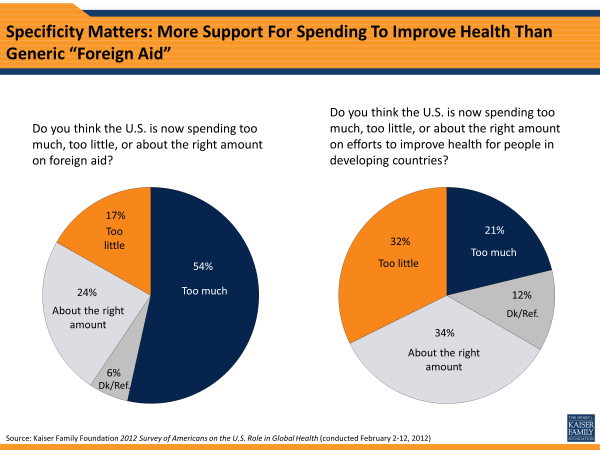 Who Is Most Likely To Support Increasing The Current Amount Of U.S. Spending On Global Health?

To address the question of which groups are most likely to support increased U.S. spending on improving health in developing countries, we analyzed which factors are associated with saying the U.S. currently spends “too little” on efforts to improve health in developing countries (32 percent of the public overall). We used multivariate logistic regression to look at the impact of demographic factors (gender, age, race/ethnicity, income, education, party identification, and ideology), as well as knowledge about foreign aid spending as a share of the federal budget, level of attention paid to global health issues, experience traveling to a developing country, and the belief that more spending will lead to meaningful progress.

This analysis reinforces another finding from this survey—that correcting misconceptions about foreign aid spending has the potential to change opinions. It also suggests that increasing the visibility of global health issues among the public, and convincing people of the effectiveness of such spending could be potentially successful strategies for those looking to gain broader support for U.S. global health efforts. 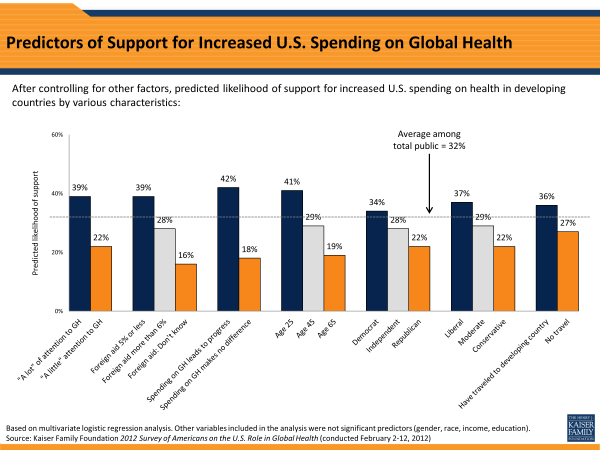