Small and large firms vary substantially on health insurance offer rates and costs. Small firms are less likely to offer coverage, and there are important differences in the health benefits that they do offer. Workers at small firms are responsible for paying both a larger share of family premiums as well as higher cost sharing than workers in large firms. Small and large firms also face different regulatory requirements; for instance, small firms face different rules about ratings and benefits than larger firms, while firms with 50 or more full-time equivalents (FTEs) must offer affordable coverage or face a penalty. This brief expands on information presented in the 2015 Kaiser/HRET Survey of Employer-Sponsored Health Benefits to look exclusively at differences in offer rates, plan costs, and cost sharing between small firms and large firms.

We define “small firms” as employers with 3 to 199 workers and “large firms” as employers with 200 or more workers. While the vast majority of businesses in the United States are small businesses, the majority of workers are employed at large firms. Of the over three million firms with 3 or more workers, 98% have between 3 and 199 employees.1  Small firms employ 38% of all workers and 30% of workers who receive health insurance through their own job. Information on the survey’s methodology can be found in the 2015 Kaiser/HRET Employer Health Benefits Survey full report.2 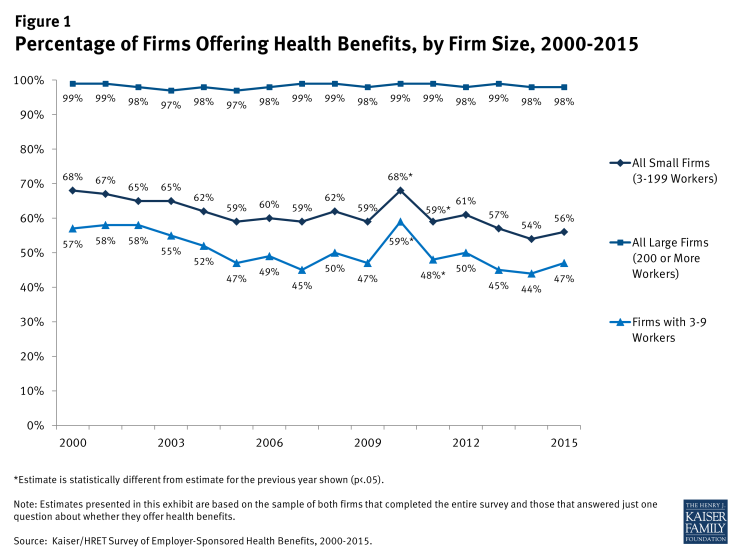 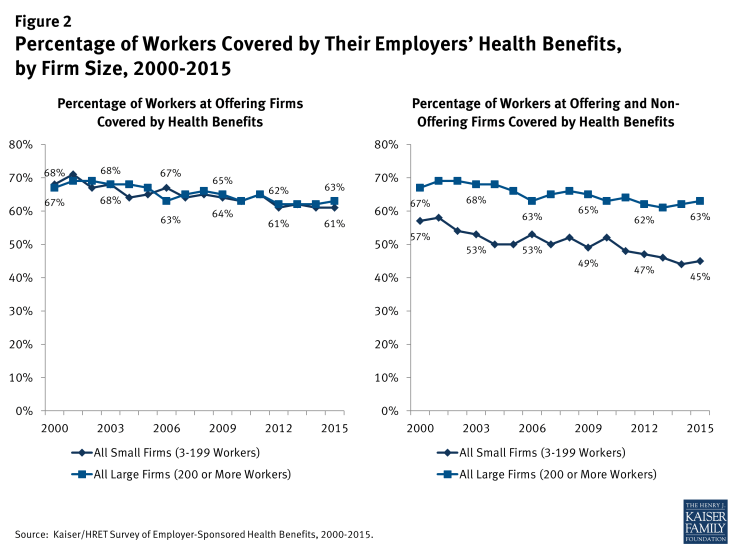 Figure 2: Percentage of Workers Covered by Their Employers’ Health Benefits, by Firm Size, 2000-2015

In addition to lower offer rates, small firms are also less likely to offer health benefits to part-time workers than are large firms (18% vs. 35%).5 A similar pattern exists for temporary workers (3% in small firms vs. 11% in large firms).6 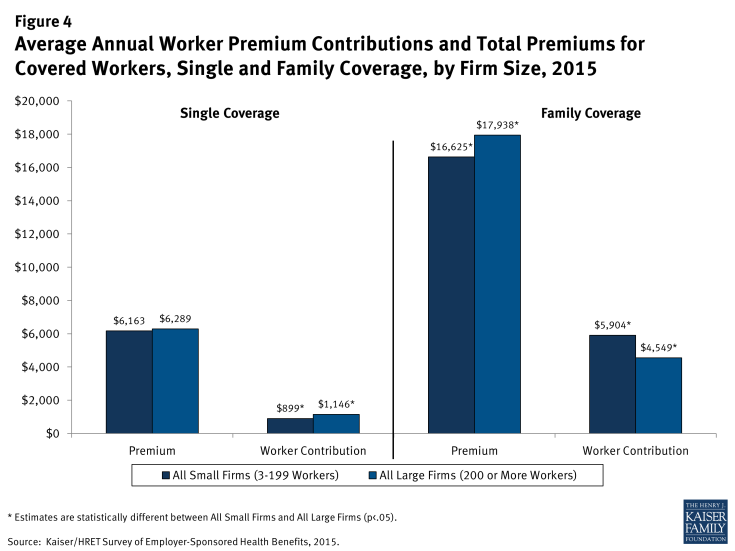 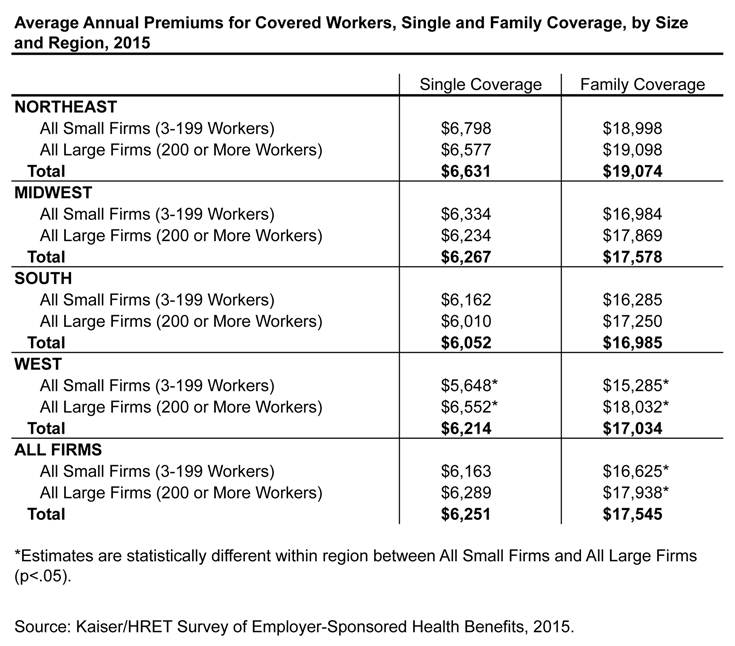 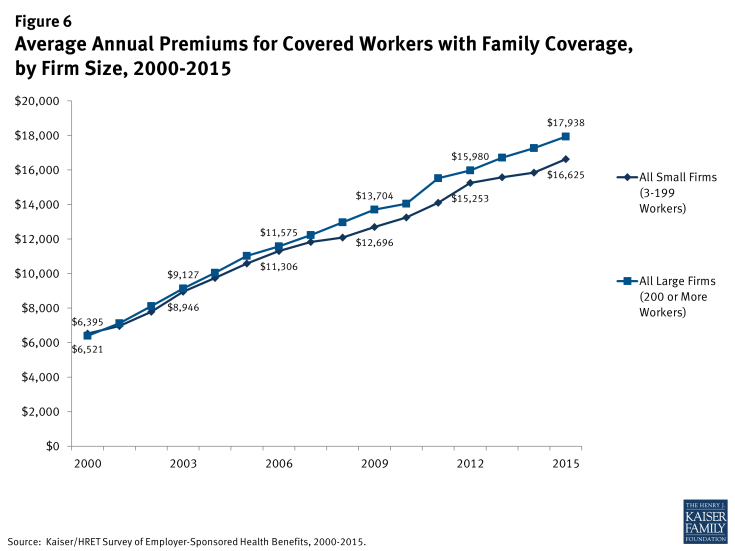 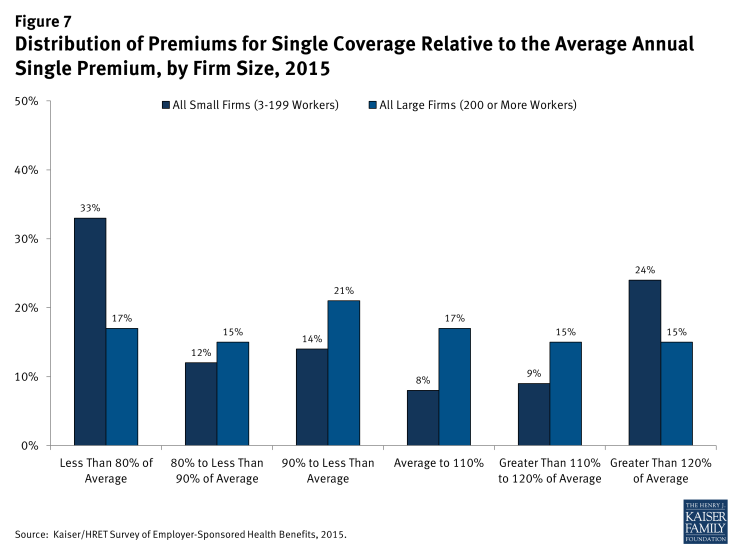 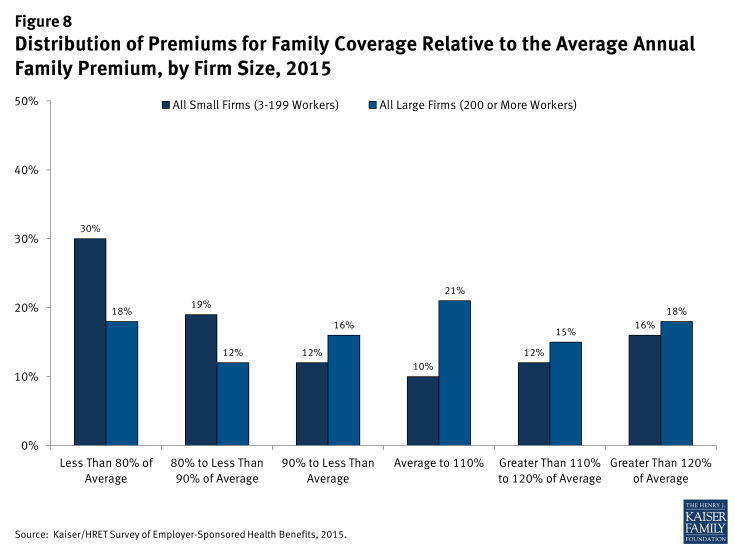 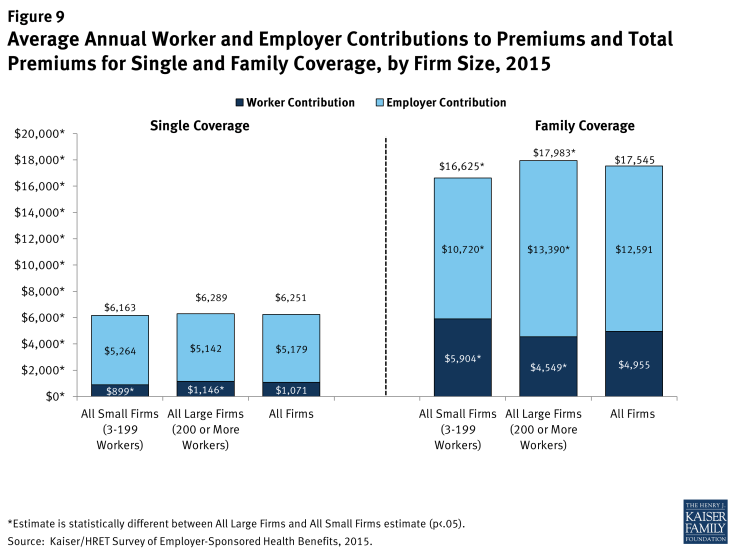 Figure 9: Average Annual Worker and Employer Contributions to Premiums and Total Premiums for Single and Family Coverage, by Firm Size, 2015 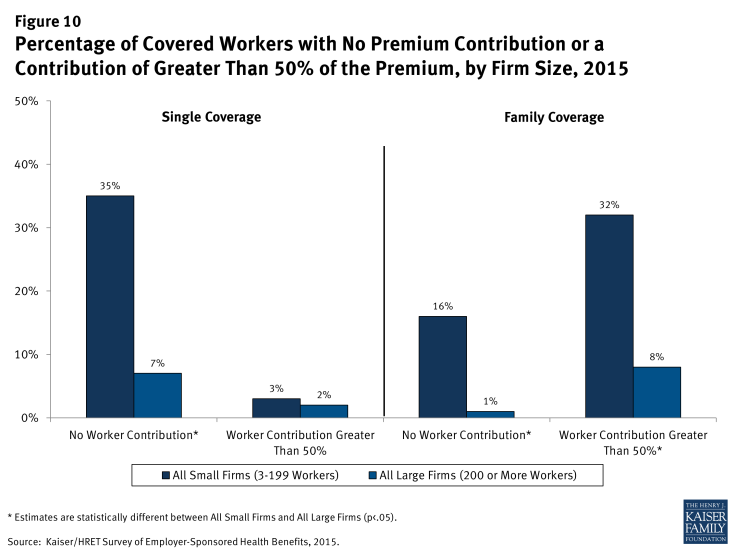 Figure 10: Percentage of Covered Workers with No Premium Contribution or a Contribution of Greater Than 50% of the Premium, by Firm Size, 2015

Firms’ approaches to family premium contributions vary depending on firm size (Figure 11). For instance, among small firms offering health benefits, 45% indicate that they contribute the same dollar amount for single coverage as family coverage, compared to only 17% of large firms who use that approach. Thirty-four percent of small firms report that they contribute a higher dollar amount for workers enrolled in family coverage than in single coverage; lower than the 67% of large firms who use that approach. 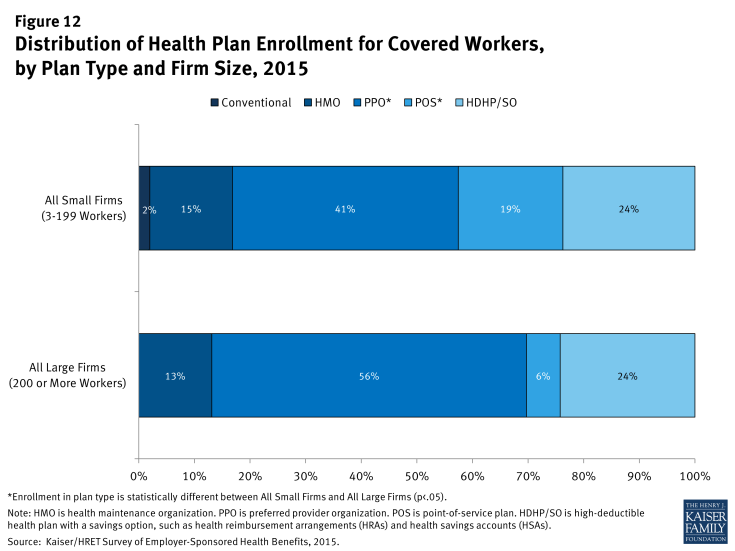 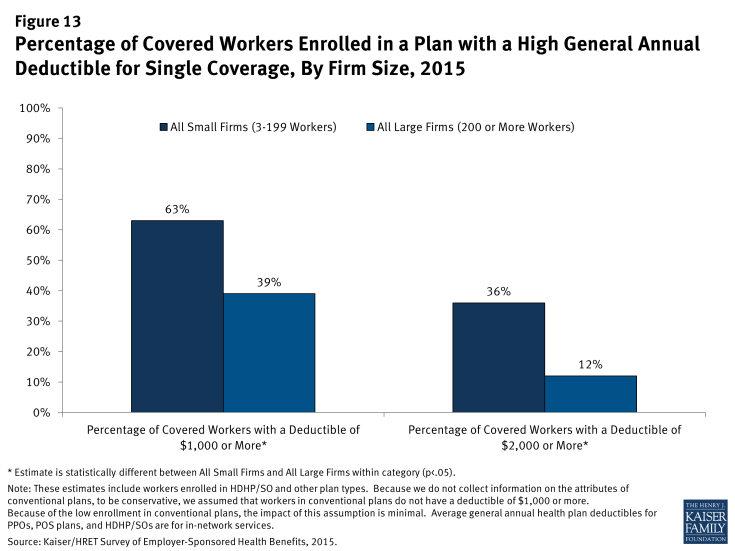 Figure 13: Percentage of Covered Workers Enrolled in a Plan with a High General Annual Deductible for Single Coverage, By Firm Size, 2015

Differences in deductible amounts vary by plan type (Figure 14). Across all plan types, workers with single coverage at small firms have annual deductibles averaging over $700 more than those in plans sponsored by large firms. For those with family coverage, the average difference between small and large firms is more than $1,400. 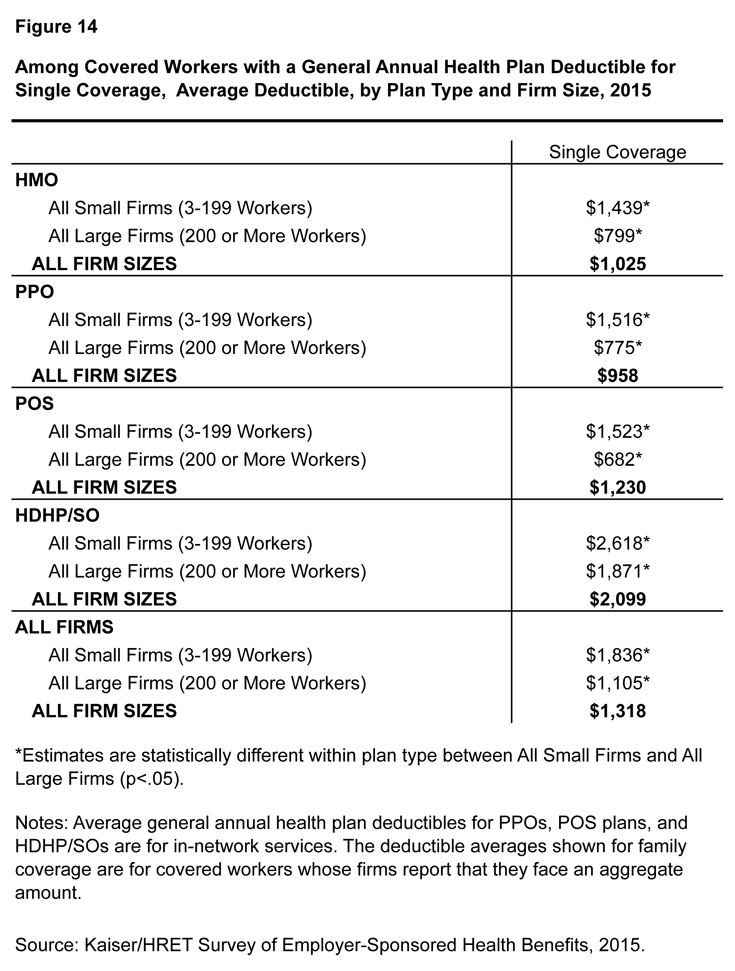 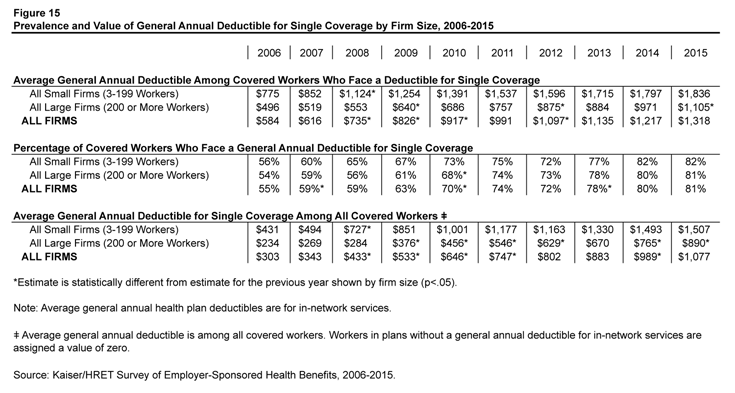 Employers of different sizes often have different resources when purchasing health coverage. Many small firms outsource more of the administrative functions of their health programs than large firms. Some firms provide health benefits by entering into a co-employment relationship with a Professional Employer Organization (PEO).  Under this arrangement, the firm manages the day-to-day responsibilities of employees but the PEO hires the employees and acts as the employer for insurance, benefits, and other administrative purposes. 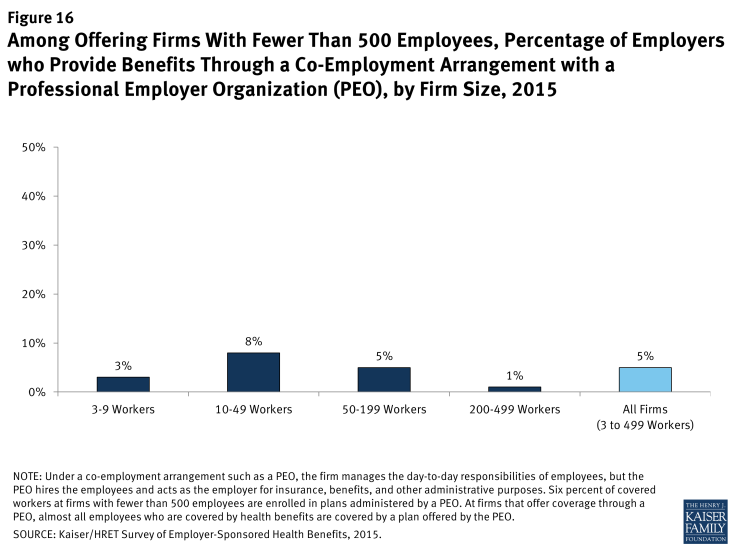 Figure 16: Among Offering Firms With Fewer Than 500 Employees, Percentage of Employers who Provide Benefits Through a Co-Employment Arrangement with a Professional Employer Organization (PEO), by Firm Size, 2015 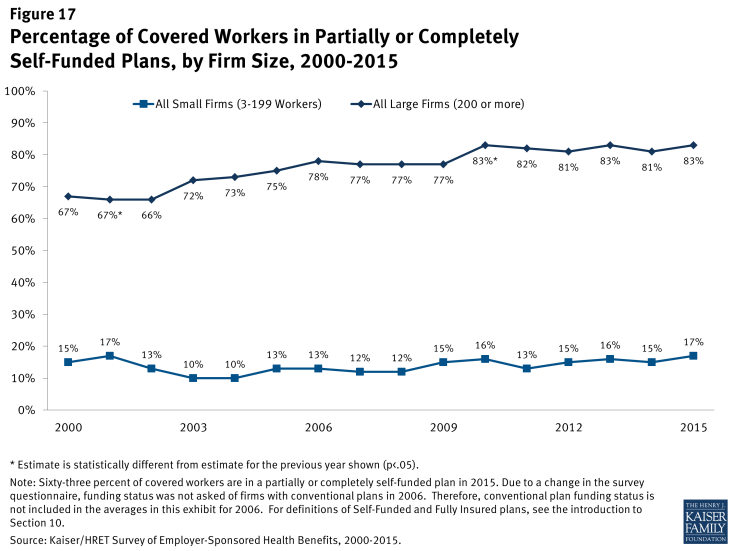 Accessibility, affordability, and coverage of employer-sponsored health insurance vary greatly for small and large firms. The smallest firms are less than half as likely to offer coverage to their employees as are large firms. While family premiums are less expensive at small firms, covered workers face higher premium contributions and higher cost sharing in the form of higher deductibles. The lower offer rates combined with greater cost-sharing responsibilities for workers in small firms may limit the ability of small firms to attract and retain employees.

The continuing implementation of the ACA has brought about a number of changes for employer-based coverage, impacting both large and small employers.10 Under the ACA, employers purchasing insurance in the small group market must ensure that their plans meet essential health benefits standards established by their respective state. While there is no requirement that small businesses provide health insurance to their employees, beginning in 2016, applicable large employers (those with at least 50 FTEs) may be subject to a penalty if they do not offer affordable coverage. To help offset the cost of providing health insurance, small businesses with fewer than 25 FTE employees may be eligible to receive tax credits when purchasing insurance through the Small Business Health Options Program (SHOP). While the ACA has and will continue to meaningfully impact the availability and scope of insurance coverage, many of the contributing factors to the differences in cost sharing and premiums between small and large employer health benefits are likely to remain.