On February 15, 2021, HealthCare.gov, the federal health insurance marketplace serving 36 states, reopened for enrollment for 12 weeks. Though styled as a “special” enrollment period, it will operate more like an open enrollment period; no qualifying life event is required to apply.  People who are currently uninsured can enroll, and people already enrolled in marketplace plans can change to different policies. Nearly all state-run marketplaces also have re-opened enrollment to their residents. At the outset, this COVID enrollment period may not seem all that different from the open enrollment period that just ended, though other changes (planned or under discussion) could make it easier for people to sign up this time.

An estimated 8.9 million uninsured Americans are eligible for marketplace subsidies today but not enrolled.  Racial and ethnic minorities are disproportionately represented in this population. (Figure 1)

Another 6 million uninsured are eligible to buy unsubsidized coverage through the marketplace today.  This includes 3.4 million whose income is too high (over 400% FPL) to qualify for subsidies. In addition, people who already enrolled in marketplace coverage through HealthCare.gov (8.3 million) will have an opportunity to change plans during the COVID enrollment period.  In some state-based marketplaces, already-enrolled consumers also can change plans during this period; consumers should check with their state-based marketplace for more details.

Premium subsidies for marketplace plans are available for people with income between 100% and 400% of the federal poverty level. Subsidies are set to cover the cost of a benchmark (second-lowest cost) silver plan, minus a required individual contribution tied to income on a sliding scale. Even with income at the poverty level ($12,760 in 2021), a person is required to pay $22/month, or 2.07% of household income, for the benchmark silver plan.  Subsidies decline steeply as income rises. At twice poverty, a person must contribute $139/month (6.52% of income), and at 3 times poverty $314/month, or 9.83% of income. Above 4 times poverty, marketplace subsidies end, leaving people to pay a substantial share of income for coverage. With age-rating, premiums can top 20% of income for older individuals. (Figure 2) 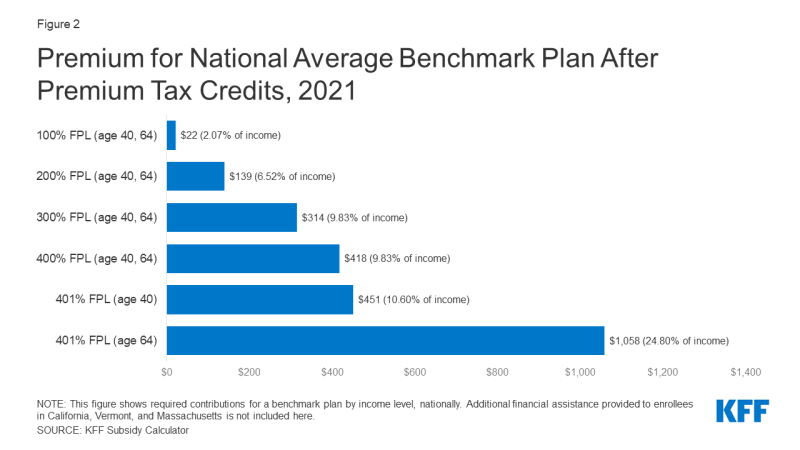 Premium tax credits can be applied to any metal level marketplace plan, and will cover a greater share of total premium for plans that cost less than the benchmark plan; in some cases the subsidy can cover the full cost of a bronze level plan. An estimated 4 million uninsured people are eligible for a zero-cost bronze plan this year.  However, because cost sharing subsidies are only available through silver plans, electing a “free” bronze plan involves serious tradeoffs. Deductibles in bronze plans typically approach $7,000 per year, while silver plan deductibles with CSR can be as low as $200. A KFF survey finds 75% of uninsured individuals are not interested in free bronze plans with such high deductibles. Affordability concerns are cited by two-thirds of the uninsured as the main reason they lack coverage.

Congress is considering new COVID relief legislation that would, among other things, increase marketplace subsidy amounts and eligibility. A House bill would extend premium tax credits to individuals with income above 400% FPL and substantially increase tax credits for people with lower income. Millions of currently subsidized marketplace enrollees would be eligible for more affordable coverage. The greatest impact would be felt by approximately 3.4 million current enrollees with income up to 150% FPL (as well as subsidy-eligible uninsured people at that income level) who would be able to buy a zero-premium silver plan with generous cost sharing subsidies.  Additionally, uninsured individuals with income above 400% FPL would be newly eligible for tax credits, with the greatest amount of relief available to older adults who face age-rated premiums.

The Biden Administration will invest in a national outreach campaign to inform people about the new marketplace enrollment opportunity. Previously, the Trump Administration had cut spending for marketing by 90%. The KFF tracking poll for December 2020 found that, during the last open enrollment, fewer than 1 in 5 consumers knew the deadline for signing up, even as it approached.

The Trump Administration had also drastically cut spending for navigator enrollment assistance to $10 million per year, compared to $63 million in 2016. Navigator entities tended to front-load their federal awards to maximize help they could offer during open enrollment; leaving many programs with limited resources to help consumers during the COVID enrollment period. At this writing, the Biden Administration has not announced whether or how much additional navigator funding might be released during the COVID enrollment period for HealthCare.gov states. More than $1.3 billion in unspent federal marketplace user fee revenue accumulated during the Trump Administration, leaving money available to invest in consumer assistance, which could have a material impact on signups.

A recent KFF survey found that that consumer assistance matters – 60% of marketplace enrollees faced difficulty applying for coverage in 2020, and 40% of those who got help signing up said they could not have enrolled without it. The survey also found nearly 5 million consumers looked for help in 2020 but could not find it.

The Biden Administration said it will periodically release data on signups during the COVID enrollment period.  With a goal of expanding health coverage to as many people as possible during the pandemic, success may well depend on the impact of enhanced premium subsidies (if enacted), as well as the effectiveness of outreach efforts.