The final months of 2020 were the deadliest months of the pandemic for many long-term care facilities (LTCFs) across the country, with over 26,000 COVID-19 deaths in LTCFs reported between Thanksgiving weekend and December 31, 2020. The end of 2020 also saw the approval of the first coronavirus vaccines and the launch of vaccine administrations in LTCFs through the Pharmacy Partnership for Long-Term Care on December 21st, 2020 (Pfizer-BioNTech) and December 28th, 2020 (Moderna). As of February 22, 2021, about 4.5 million residents and staff have received one or more dose through the Partnership; over 2 million residents and staff have received both doses. In addition, some states and some LTCFs have vaccinated residents or staff outside the Partnership. Vaccinations have increased outside of LTCFs as well, though at a significantly lower rate. 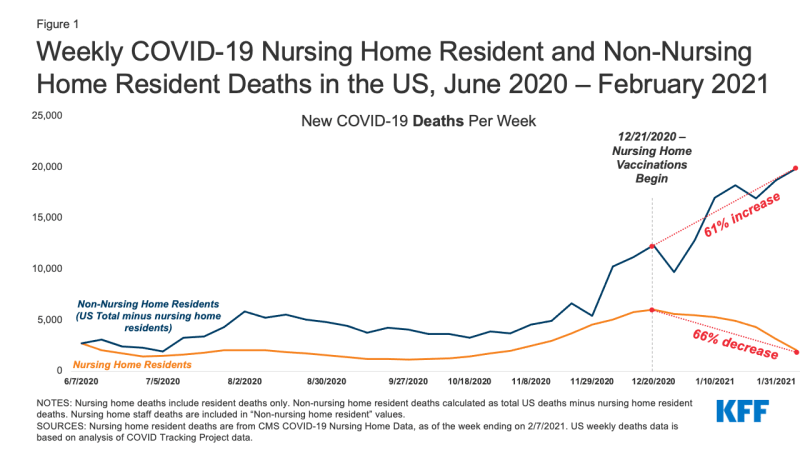 While timing of vaccine initiation in LTCFs and declines in cases and deaths coincide and suggest a link between the two, it is still unclear how much of the decline in cases and deaths can be attributed directly to the vaccine. In particular, cases and deaths started declining upon rollout of the Partnership, but first vaccine clinics did not happen immediately in all locations. According to the CDC, there has been strong evidence that the vaccines prevent severe illness and death, and the sharp divergence in deaths inside and outside of LTCFs is consistent with that evidence. In addition, given the emerging research around the vaccines’ ability to prevent transmission of the virus, there is reason to believe that the vaccine may be playing a part in reducing virus transmission within nursing homes, contributing to the more rapid decline in new cases in nursing facility residents than in the overall population.