President Biden has endorsed adding a hard cap on out-of-pocket Medicare Part D prescription drug spending, and this proposed change has also been included in legislation sponsored by policymakers on both sides of the aisle, including H.R. 3, which passed the U.S. House of Representatives in December 2019 and was recently reintroduced in the 117th Congress; H.R. 19, the House GOP prescription bill (a similar version was introduced in the Senate); bipartisan legislation that passed out of the Senate Finance Committee in the 116th Congress (S. 2543); and other legislation. Under H.R. 3, out-of-pocket drug spending under Part D would be capped at $2,000 (beginning in 2024), while under the GOP drug price legislation and the 2019 Senate Finance bill, the cap would be set at $3,100 (beginning in 2022); under each of these proposals, the out-of-pocket cap excludes the value of the manufacturer price discount. A lower cap would help more beneficiaries and provide more out-of-pocket savings than a higher cap, but could mean higher costs for the federal government, plans, and drug manufacturers, depending on the specific features included in these Part D benefit redesign proposals.

To inform discussions about the potential impact of this proposal, in a previous KFF analysis, we analyzed how many Part D enrollees without low-income subsidies exceeded the catastrophic coverage threshold annually and over multiple years, taking into account both beneficiary out-of-pocket spending and the value of the manufacturer discount, and we found that 1.5 million enrollees did so in 2019, and close to 3 million did so between 2015 and 2019. In this analysis, we focus on the potential impact of different out-of-pocket spending caps in terms of how many beneficiaries would be affected and how much they could save. We analyze how many beneficiaries paid more than $2,000 or $3,100 out of their own pockets for their medications in 2019 (excluding the value of manufacturer discounts they may have received), and the magnitude of potential savings for beneficiaries had these caps been in place in 2019. We also analyze the individual drugs for which Part D enrollees incurred average annual out-of-pocket costs in 2019 above the amount of proposed caps. The analysis is based on 2019 Part D claims data (the most current year available) for Part D enrollees without low-income subsidies (LIS) from the Centers for Medicare & Medicaid Services Chronic Conditions Data Warehouse (see Methods for details).

What is the magnitude of potential savings for Part D enrollees with out-of-pocket costs above $2,000 or $3,100 based on proposed spending caps? 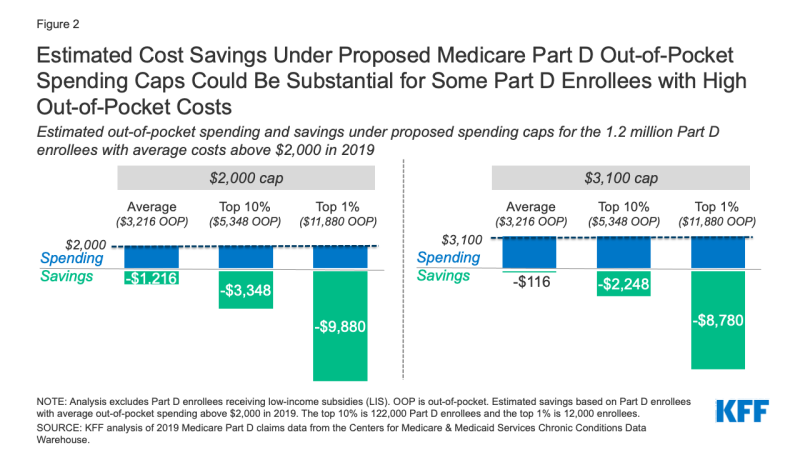 How many and which drugs had average out-of-pocket costs in 2019 above proposed spending caps?

Our analysis shows that close to 1 million more Medicare Part D enrollees would have had their out-of-pocket costs capped in 2019 under a $2,000 out-of-pocket drug spending limit (as under H.R. 3) than a $3,100 limit (as under the GOP bill and the 2019 Senate Finance Committee bill). Under either cap, however, savings could be considerable for Part D enrollees who take high-cost medications for conditions such as cancer and MS. Deciding on the level of the cap involves tradeoffs, with more enrollees benefitting and higher out-of-pocket cost savings from a lower cap, but with the potential for higher spending by the federal government, plans, and drug manufacturers, depending on the specific features included in the Part D benefit redesign proposal.

While proposed legislation to cap out-of-pocket costs under Medicare Part D would help beneficiaries who take several costly medications or even just one high-priced drug, these proposals would not cap drug spending for expensive physician-administered injectable and infused medications that are covered under Medicare Part B. These drugs are subject to a 20% coinsurance, with no cap on out-of-pocket costs. While many Medicare beneficiaries have supplemental coverage, such as employer-sponsored retiree benefits or Medigap, to help pay their share of costs, nearly 6 million beneficiaries lack supplemental coverage and another 26 million are enrolled in Medicare Advantage plans and typically face 20% coinsurance for Part B drugs up to their plan’s out-of-pocket maximum.

For example, a Medicare beneficiary who takes aducanumab, the new Alzheimer’s drug priced at $56,000 annually, would face cost-sharing liability of more than $11,000 in a year, according to KFF analysis, unless they have supplemental insurance. Medicare Advantage enrollees would have a portion of their out-of-pocket costs for this drug covered but would need to pay out of pocket up to their plan’s limit for Medicare Part A and B benefits ($7,550 in 2021 for in-network and $11,300 for in-network and out-of-network combined).

The number of Medicare Part D enrollees who have annual out-of-pocket costs greater than $2,000 or $3,100 in a future year, when a proposed cap could be implemented, is likely to exceed our estimates that are based on actual claims data for 2019, considering enrollment growth, rising drug prices for existing drugs, and the availability of new, higher-priced medications covered by Part D. These estimates also do not reflect the interactive effects of other provisions being considered in current prescription drug legislation, such as allowing the federal government to negotiate drug prices or Part B and Part D drug price inflation caps, which would also affect out-of-pocket drug spending.

Adding an out-of-pocket cap to Part D would protect Part D enrollees with high drug costs, which may affect only a small share of enrollees in any given year but a larger share over time, including those who have persistently high drug costs over multiple years and others who have high costs in one year but not over time. The outcome of current discussions in Congress about prescription drug legislation has implications for the affordability of prescription drugs among Medicare beneficiaries.

Juliette Cubanski and Tricia Neuman are with KFF. Anthony Damico is an independent consultant.