Premiums paid by Medicare Advantage enrollees have declined slowly since 2015

Average Medicare Advantage Prescription Drug (MA-PD) premiums declined by $4 per month between 2020 and 2021, much of which was due to the relatively sharp decline in premiums for local PPOs, which fell by $7 per month. Since 2016, enrollment in local PPOs has increased rapidly as a share of all Medicare Advantage enrollment, corresponding to broader availability of these plans. Average premiums for HMOs declined $2 per month, while premiums for regional PPOs increased $1 per month between 2020 and 2021.

Average MA-PD premiums vary by plan type, ranging from $18 per month for HMOs to $25 per month for local PPOs and $48 per month for regional PPOs. For all MA-PDs, the monthly premium is $21 per month for both Part A and Part B benefits and Part D prescription drug coverage (and averages $12 for just the Part D portion of covered benefits). Nearly two-thirds (60%) of Medicare Advantage enrollees are in HMOs, 35% are in local PPOs, and 4% are in regional PPOs in 2021.

However, Medicare Advantage plans may reduce cost sharing as a mandatory supplemental benefit, and may use rebate dollars to do so. According to the Medicare Payment Advisory Commission (MedPAC), in 2021, about 46 percent of rebate dollars were used to lower cost sharing for Medicare services.

This analysis does not take into account the fact that a majority of people in traditional Medicare would not pay the deductible if hospitalized because they have supplemental coverage, although those with Medigap or retiree health would have the additional cost of a monthly premium. However, 5.6 million beneficiaries in traditional Medicare have no supplemental coverage and would be liable for the full Part A deductible if admitted to the hospital. 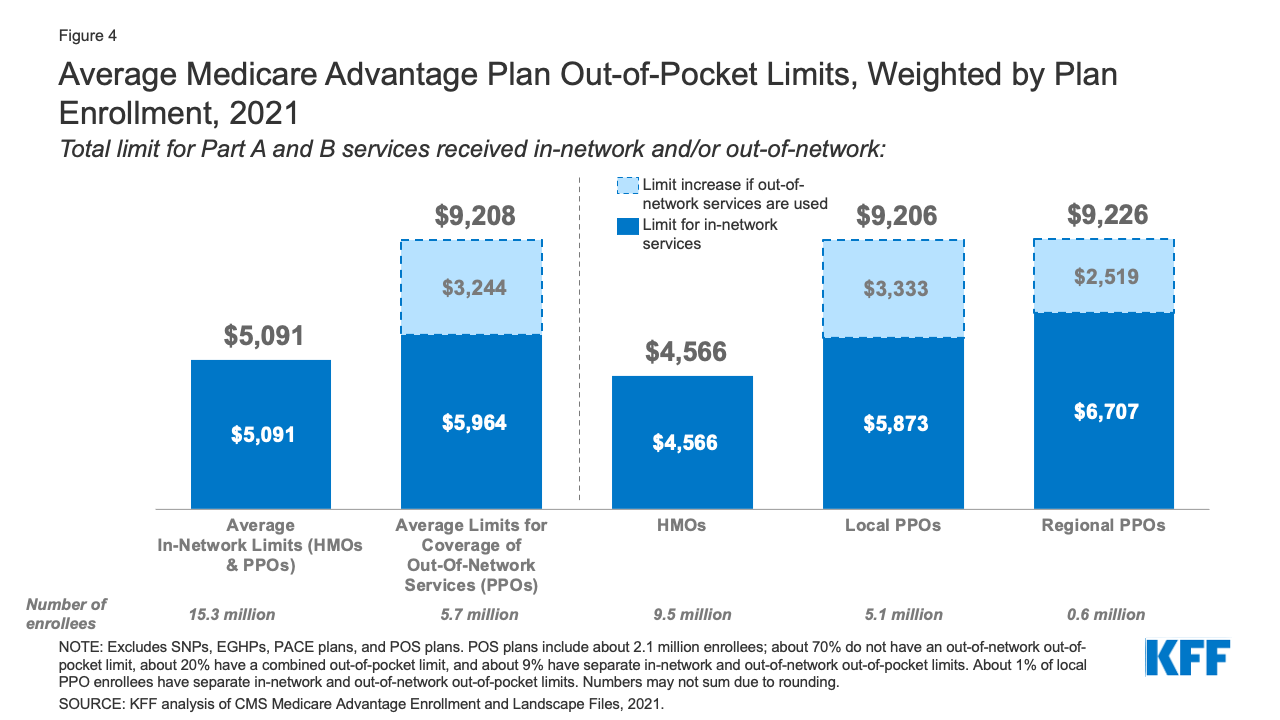 Most enrollees in individual Medicare Advantage plans (those generally available to Medicare beneficiaries) are in plans that provide access to eye exams and/or glasses (99%), hearing exams/and or aids (97%), telehealth services (94%), dental care (94%), and a fitness benefit (93%). Similarly, most enrollees in SNPs are in plans that provide access to these benefits. This analysis excludes employer-group health plans because employer plans do not submit bids, and data on supplemental benefits may not be reflective of what employer plans actually offer.

Though these benefits are widely available, the scope of specific services varies. For example, a dental benefit may include preventive services only, such as cleanings or x-rays, or more comprehensive coverage, such as crowns or dentures. Plans also vary in terms of cost sharing for various services and limits on the number of services covered per year and many impose an annual dollar cap on the amount the plan will pay toward covered services. Enrollees in SNPs have more access to certain benefits compared to enrollees in individual plans, such as over the counter drug benefits (97% vs 79%); transportation (88% vs 37%); a meal benefit (73% vs 55%) and in-home support services (14% vs 7%). However, there is no publicly available data on how frequently supplemental benefits are utilized by enrollees or the amounts they pay out-of-pocket for these services.

As of 2020, Medicare Advantage plans have been allowed to include telehealth benefits as part of the basic benefit package – beyond what was allowed under traditional Medicare prior to the public health emergency. These benefits are considered “telehealth” in the figure above, even though their cost may not be covered by either rebates or supplemental premiums. Additionally, Medicare Advantage plans may also offer supplemental telehealth benefits via remote access technologies and/or telemonitoring services, which can be used for those services that do not meet the requirements for coverage under traditional Medicare or the requirements for additional telehealth benefits (such as the requirement of being covered by Medicare Part B when provided in-person). The majority of enrollees in both individual plans and SNPs have access to remote access technologies (70% and 79%, respectively), but just 5% of enrollees in individual plans and 6% of enrollees in SNPs have access to telemonitoring services.

While data on Medicare Advantage plan availability and enrollment and plan offerings is robust, the same cannot be said about service utilization and out-of-pocket spending patterns, which is essential for assessing how well the program is meeting its goals in terms of value and quality and to help Medicare beneficiaries compare coverage options. As enrollment in Medicare Advantage and federal payments to private plans continues to grow, this information will become increasingly important.