“What is CMMI?” and 11 other FAQs about the CMS Innovation Center

Q1: What is CMMI – the Center for Medicare and Medicaid Innovation?

The Center for Medicare and Medicaid Innovation (CMMI), also known as the “Innovation Center,” was authorized under the Affordable Care Act (ACA) and tasked with designing, implementing, and testing new health care payment models to address growing concerns about rising costs, quality of care, and inefficient spending. Congress specifically directed CMMI to focus on models that could potentially lower health care spending for Medicare, Medicaid, and the Children’s Health Insurance Program (CHIP) while maintaining or enhancing the quality of care furnished under these programs. CMMI is part of the U.S. Department of Health and Human Services and is managed by the Centers for Medicare and Medicaid Services (CMS).

What is the Center for #Medicare and #Medicaid Innovation (CMMI), also known as the “Innovation Center”? See these FAQs from @KaiserFamFound to find out.

Q2: How many new payment models has CMMI launched? How many patients and providers have been involved in CMMI models?

CMMI has launched over 40 new payment models, involving more than 18 million patients and 200,000 health care providers.1 Many of these models are in Medicare, including accountable care organizations (ACOs), bundled payment models, and medical homes models. Combined, these three types of models in Medicare are located in all 50 states and the District of Columbia (Figure 1). CMMI is also testing payment models in Medicaid and CHIP.2 Separately, CMMI awards grants to state agencies, researchers, and other organizations for projects to design and implement new payment models with the same goals of improving care and lowering costs. While the focus of CMMI is on Medicare, Medicaid, and CHIP programs, CMMI interventions also include multi-payer alignment models that affect patients with commercial insurance. 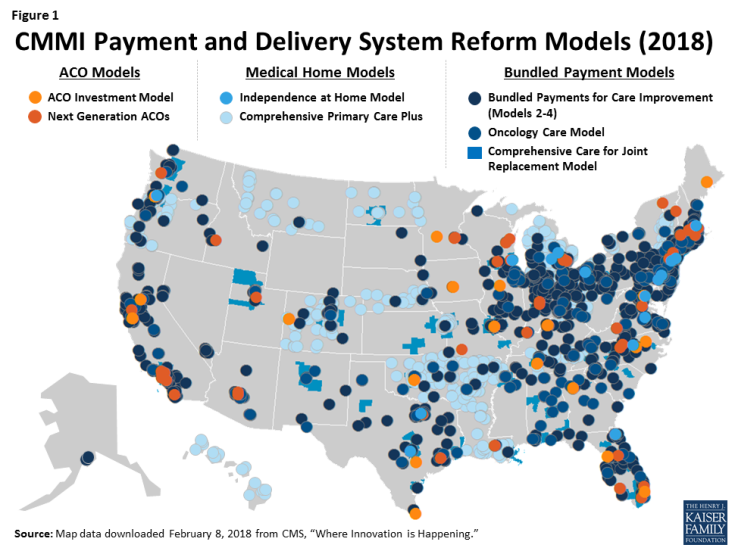 Q3: Is this type of work new for CMS?

No and yes. CMS has always had the authority to test payment models through demonstration programs. Through CMMI, however, the ACA granted the Secretary more tools and funding to design, adapt, and test models that could produce savings. Moreover, the Secretary now has broader authority to expand CMMI programs into Medicare, Medicaid, and CHIP if they meet savings and quality criteria, and terminate the models that fail. In prior years, Congressional action was necessary to expand successful demonstration programs into the full Medicare program, which often delayed or blocked their implementation. Additionally, CMS was often prevented from modifying or ending demonstration models based on early results (positive or negative), because the models were specified in law.

The ACA funded CMMI $10 billion for the years 2011 through 2019, and allocated another $10 billion for CMMI each decade thereafter. These funds are not subject to annual appropriations. They are designated for the operation of CMMI and to test and evaluate health care payment models that have the specific goals of lowering program expenditures under Medicare, Medicaid, and CHIP while maintaining or enhancing the quality of care furnished under these programs.

Q5: Does CMMI cost or save federal dollars?

Both. The Congressional Budget Office (CBO) estimates that in its initial years, CMMI had net spending due to start-up costs for launching new payment models, but in later years, CMMI will save the federal government an estimated $34 billion, on net, from 2017-2026. This savings projection takes into account about $12 billion in costs to implement the models and $45 billion in savings. CBO attributes a large part of CMMI savings to the Secretary’s ability to end payment models that fail to produce savings and expand CMMI models that do produce savings.

Q6: What is the evidence on Medicare savings and quality among CMMI models and other delivery system reforms?

To date, the evidence on Medicare payment and delivery system reforms is mixed. While some CMMI models are meeting and improving upon quality goals, overall net savings to Medicare has been relatively modest, with large variations in results between the major models as well as among the individual programs within each of them. Below are the latest available results for selected models. 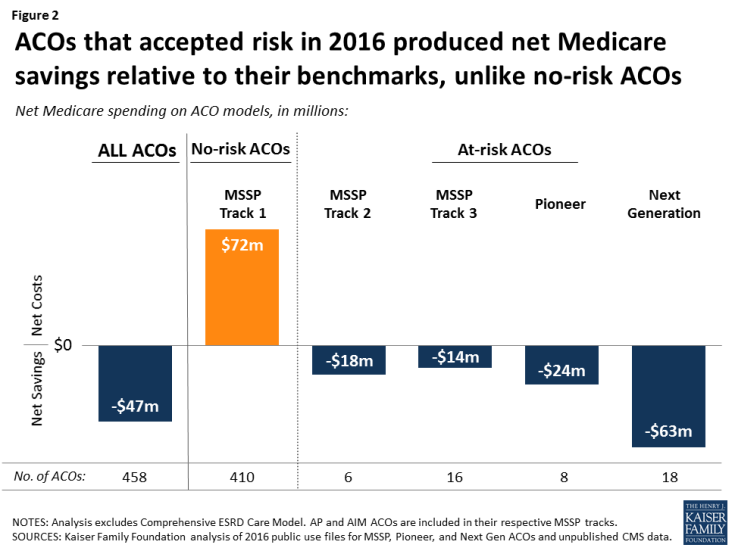 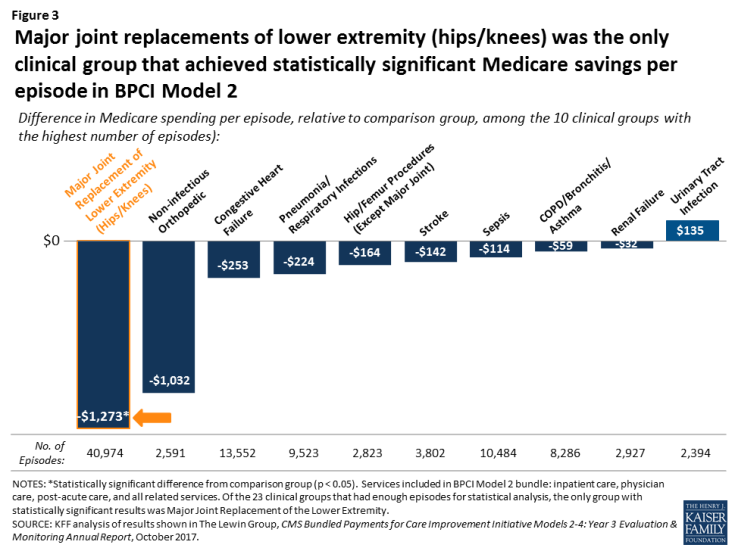 For further details on these results, see the Kaiser Family Foundation Evidence Link—an online resource with interactive tools for comparing each model based on key features and available evidence on savings and quality.

Q7: Have any CMMI models been successful enough to be eligible to become a full part of Medicare?

Yes. Two CMMI models have met the statutory criteria to be eligible for expansion by reducing program spending while preserving or enhancing quality. These two models are the Diabetes Prevention Program (DPP) model and the Pioneer ACO model. The DPP was implemented in partnership with the YMCA with a focus on Medicare beneficiaries at high risk of developing type 2 diabetes. The model concentrated on patient engagement activities for losing weight and making positive dietary choices. Based on the DPP’s savings of $2,650 per person and its demonstration of quality improvements, the Secretary expanded this program to become a full preventive benefit in Medicare Part B (the “Medicare Diabetes Prevention Program”), effective April 2018.

Q8: Do people in Medicare know they are in a CMMI model? Can they opt-out or opt-in?

Sometimes, depending on the model. For most of the CMMI models, doctors and other providers are required to inform their Medicare patients if they are participating in a CMMI payment model, but it is not clear if their patients are typically aware of their attribution to one, or the implications for their care.

In contrast, if beneficiaries want to be part of a specific ACO, they may submit information to CMS to indicate their preference, based on who they identify as their main doctor. CMMI is currently implementing this “voluntary alignment” method across ACOs, and Congress established it as a requirement in the recently passed Bipartisan Budget Act of 2018. This law also allows risk-bearing ACOs to pay their Medicare patients $20 per primary care service as an incentive for obtaining primary care in their ACO. This incentive could have the indirect effect of increasing Medicare beneficiaries’ awareness of their alignment with a particular ACO.

Q9: Do CMMI models include enrollees in Medicare Advantage plans?

While most of CMMI’s Medicare models apply only to traditional Medicare, the Value-Based Insurance Design (VBID) model was created specifically for beneficiaries in Medicare Advantage plans with certain chronic conditions. The VBID model allows Medicare Advantage plans to offer lower cost sharing and/or additional benefits to encourage their use of “high value” services and providers. CMMI is currently testing the model in 10 states, and plans to expand to 25 states in 2019. In the recently passed Bipartisan Budget Act of 2018, Congress further expanded the CMMI VBID model to allow participation among Medicare Advantage plans in all states by 2020.

In addition to the VBID model, CMS noted in its recent Request for Information (RFI) that the agency is considering new CMMI models that would include Medicare Advantage plan participation. Additionally, starting in 2019, physicians may count their affiliation with qualifying Medicare Advantage plans towards their eligibility for 5-percent bonuses under the Medicare Access and CHIP Reauthorization Act (MACRA), described further in Question #11.

Q10: Are Medicare Advantage plans the same as ACOs?

Q11: Will CMMI play a role in the new way that Medicare will be paying doctors?

Yes. Based on a law passed in 2015—the Medicare Access and CHIP Reauthorization Act (MACRA)—physicians who participate in certain CMMI models will be eligible for automatic 5-percent bonuses on their Medicare payments, starting in 2019. The CMMI models that qualify physicians for these bonuses are called “advanced alternative payment models” (advanced APMs). They include certain types of ACOs, certain bundled payment modes, and the Comprehensive Primary Care Plus (CPC+) medical home model.10 CMS estimated that for 2017, between 70,000 and 120,000 providers (under 10% of all Medicare clinicians billing Part B) will be affiliated with advanced APMs, but more are anticipated in future years as the number of advanced APMs continues to increase.

Q12: What changes has CMMI instituted since the start of the Trump Administration?

In general, CMMI’s organizational structure, funding, and many of CMMI’s models have continued along the same lines as under the previous Administration. In some cases, however, CMMI has changed or canceled certain models—particularly ones that specify mandatory participation among hospital providers—and has announced the start of a new bundled payment model in the fall of 2018, and the official start of the Medicare Diabetes Prevention Program in Part B.

Finally, in September of 2017, CMS released a Request for Information (RFI) in which the agency sought stakeholder input and feedback on the future direction of CMMI. It included a statement of its guiding principles and focus areas, which include ways to increase flexibility and competition in Medicare Advantage plans, programs affecting Medicare’s payment for Part B drugs (such as chemotherapy), increasing physician participation in “advanced alternative payment models” (advanced APMs), and other “direct” physician payment options. The comment period ended November 20, 2017, and CMS reports that it is continuing to read through the large number of comments that the agency received.