ACOs are groups of doctors, hospitals, and other health care providers who voluntarily form partnerships to collaborate and share accountability for the quality and cost of care delivered to their patients. In Medicare, CMS generally attributes beneficiaries to ACOs based on their primary care provider’s affiliation with a Medicare ACO, but beneficiaries are free to seek services from any Medicare provider inside or outside of the ACO. CMS payments to ACOs incorporate financial incentives for lowering spending and meeting specified quality goals for their beneficiary population. These financial incentives—which can include shared savings or losses (bonuses or penalties)—are paid to or collected from the ACO, rather than the individual providers or facilities that may have treated each of the ACO’s beneficiaries.

CMS offers a range of ACO models in Medicare that vary by key design features, including levels of financial risk, up-front payments for infrastructure costs, and beneficiary involvement. To learn more about each model and compare key features, see our Medicare ACO Side-by-Side comparison tool.

Q2: What are the different types of Medicare ACO models?

The MSSP is a permanent ACO program in traditional Medicare that provides financial incentives for meeting or exceeding savings targets and quality goals. The MSSP program has multiple tracks that allow ACOs to choose between sharing in both savings and losses, or just savings. These are: Track 1, Track 1+, Track 2, and Track 3.

The Advance Payment ACO model, which ended in 2015, was a subset of the MSSP. It provided up-front payments to ACOs to support infrastructure development and operations, particularly among smaller and/or rural providers. Advance Payment ACOs also received monthly, population-based payments and could share in savings after CMS recouped the advance payments. Some former Advance Payment ACOs remain in the MSSP program.

The ACO Investment model is a subset of the MSSP. It provides several options for upfront and monthly pre-payments to assess whether or not early investments increase participation in the MSSP among smaller and/or rural providers. These ACOs are eligible for shared Medicare savings, and are encouraged to transition to models that take on financial risk.

Q3: What is the evidence on savings for Medicare ACO models?

Across ACOs (namely, MSSP, Pioneer, and Next Generation ACOs), net savings to Medicare totaled $47 million in 2016 relative to target (“benchmark”) levels, after accounting for shared savings and losses. While all of the models generated lower gross spending on Medicare services, only the models that required ACOs to be at risk for shared losses achieved net Medicare savings. In contrast, no-risk (“bonus only”) models generated net Medicare costs.

Among MSSP ACOs—the most prevalent ACO model—over half (56%) had spending that was lower than their benchmark in 2016. Although these ACOs generated $652 million in gross Medicare savings, the total amount that CMS paid to ACOs in shared savings bonuses ($701 million) exceeded gross savings (Table 1). Even after CMS recouped about $9 million in shared losses from the 5 percent of MSSP ACOs that accepted risk, the overall net cost to Medicare for MSSP ACOs was $39 million relative to their overall benchmark. In 2015, these net costs were higher (over $200 million), suggesting improvement in 2016.

In contrast, the Pioneer ACO program, which required all ACOs to take on financial risk, achieved overall net savings each year. In 2016, the last year of the Pioneer ACO program, net Medicare savings totaled $24 million relative to benchmark levels. An independent evaluation also calculated Medicare savings (approximately 1-2%) for Pioneer ACOs relative to a comparison group for 2013. Nevertheless, by the end of the Pioneer program, 24 of 32 ACOs withdrew (some of which transferred to other types of ACOs).

In its first year (2016), the Next Generation ACO program, designed to follow the Pioneer ACO program, also achieved net Medicare savings ($63 million) relative to benchmark levels. These net savings incorporate “discounts” that CMS makes to each ACO’s benchmark. (Discounts are based on regional and national spending trends and quality scores.) Of the 18 initial Next Generation ACOs, 11 had spending under their benchmarks and received shared savings payments. For specific results and more details about all the ACO models, see the Medicare ACO Side-by-Side comparison tool.

Q4: What is the evidence on quality for Medicare ACO models?

Overall, CMS reports that ACO models have scored as well or better than providers in traditional Medicare on comparable quality measures, including ones for diabetes care, preventive services, and hospital readmissions. Additionally, ACOs showed improvement in performance on quality across years. In most of the ACO payment models, ACOs that do not meet specified performance levels on quality measures are either ineligible for shared saving bonuses or have reduced sharing rates. Less than 1 percent of MSSP ACOs did not meet these specified quality performance standards. For further details on quality results by model, see the Medicare ACO Side-by-Side comparison tool.

Q5: Are doctors in ACOs eligible for automatic bonuses under MACRA?

Congress enacted the Medicare Access and CHIP Reauthorization Act (MACRA), which changed the Medicare payment system for physician services. Under MACRA, physicians who are affiliated with “advanced alternative payment models” (APMs) are eligible for automatic 5-percent bonuses on their Medicare payments. Several ACO models—namely, MSSP Track 2 ACOs, Next Generation ACOs, and future MSSP Track 1+ ACOs—qualify as advanced APMs. Therefore, physicians, nurse practitioners, and other health professionals who were affiliated with these ACOs in 2017 will qualify for the 5-percent bonus on their Medicare billing starting in 2019. CMS estimated that for 2017, between 70,000 and 120,000 providers will be affiliated with these ACOs or with other qualifying APMs, including certain types of medical homes.

Q6: Where are Medicare ACOs located?

For 2018, over 550 Medicare ACOs are in operation either through the Medicare program or through specific models managed by the Center for Medicare and Medicaid Innovation (CMMI). ACOs are located in almost all states and the District of Columbia. In general, ACOs are clustered in urban and suburban areas, but some ACOs—particularly AIM ACOs—are in more rural areas. 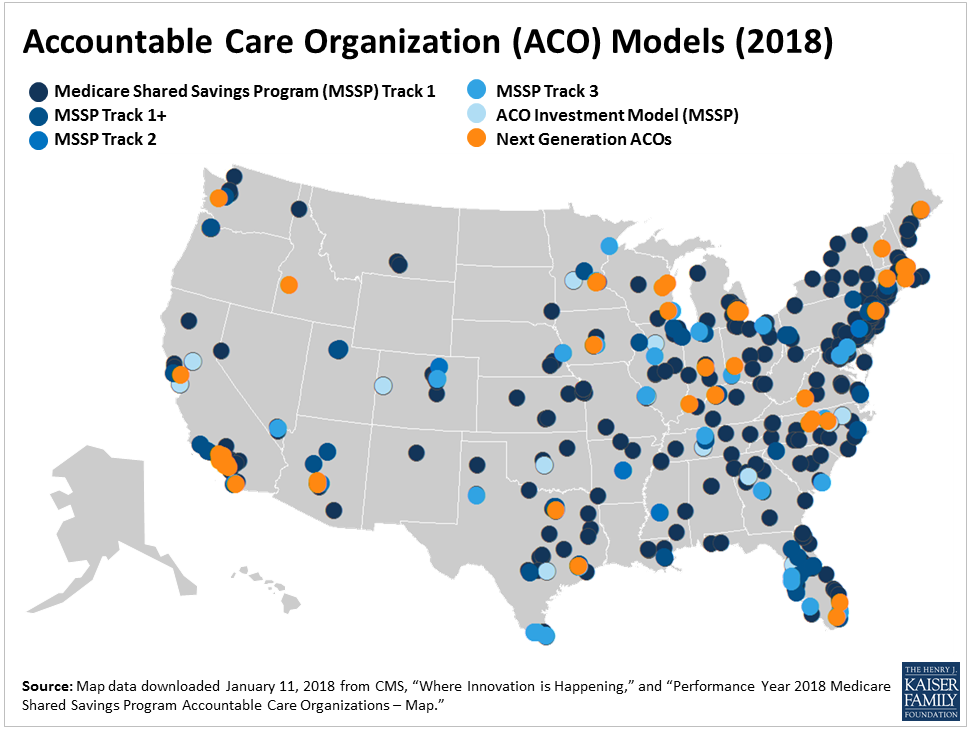 Q7: How many Medicare beneficiaries are in ACOs?

Q8: When are the start and end dates for the Medicare ACO models?

The MSSP program is a permanent program in Medicare and does not have an end date. The other models are (or were) managed by CMMI and have distinct start and end dates. Several of the more recent models were built on the framework of models that have discontinued, with adaptations based on the experiences of the earlier model.