Q1: What are bundled payment models?

In bundled payment models, Medicare establishes a total budget for all services provided to a beneficiary throughout a given episode of care. If the episode’s spending on services is below budget, then the providers may share in Medicare savings; alternatively, if providers’ costs exceed the budget, then the providers may incur losses. In some cases, bundled payment models can span across multiple health care settings. Some of Medicare’s bundled payment models are voluntary and others are mandatory for hospitals in selected areas of the country. Recently, CMS reduced the number of mandatory models that were originally scheduled to begin in 2018.

CMS is running a range of bundled payments models in Medicare that vary by key design features, including levels of financial risk, up-front payments for infrastructure costs, and beneficiary involvement. To learn more about each bundled payment model and compare key features, see our Bundled Payment Side-by-Side comparison tool.

Q2: What are the different types of bundled payment models in Medicare?

BPCI offers four different voluntary Medicare bundled payment models, numbered 1-4 (Table 1). Each model includes a different set of services for an episode of care. All episodes in BPCI models are triggered by a hospitalization. In models 1-3, CMS reconciles participants’ spending against the “target price” after the episode of care, and in Model 4, CMS makes a prospective payment based on the “target price.” Starting October 1, 2018, CMMI will be offering “BPCI Advanced,” which will include additional outpatient clinical episodes, as well as other refinements (Table 1). BPCI Advanced episodes are triggered either by an (inpatient) hospitalization or an outpatient hospital procedure.

The CJR model effectively bundles payment for lower extremity joint (hip and/or knee) replacement episodes across all inpatient hospital services, physician services, post-acute care services, and any readmissions or other related services through 90 days after the initial hospital discharge. Participants gain financially if actual expenditures for an episode (determined retrospectively) are below the “target price.” Originally, the CJR model was mandatory for hospitals in 67 geographic areas, but CMS recently reduced the number of mandatory areas to 34, allowing voluntary participation among hospitals in the remaining 33 areas, as well as for small and/or rural hospitals in all 67 areas.

The OCM is a voluntary model in which oncology practices receive monthly care management fees and are eligible for bonus payments if they lower overall Medicare spending and meet quality goals for episodes of chemotherapy and related care. CMS offers multiple risk/reward options to participating practices. Commercial insurers are also participating.

CMS recently canceled all three EPMs, originally scheduled to start in 2018. These three mandatory bundled payment models were the acute myocardial infarction (AMI) model, the coronary artery bypass graft (CABG) model, and the surgical hip and femur fracture treatment (SHFFT) model. The bundled payments for each of these models included all inpatient hospital services, physician services, post-acute care services, and other related services through 90 days after the initial hospital discharge.

CMS recently canceled the CR Incentive Payment model, originally scheduled to start in 2018. This model was a mandatory, bonus-only bundled payment model for hospitals in 90 geographic areas. It was designed for CMS to make added payments to hospitals based on the number of cardiac rehabilitation sessions that applicable Medicare patients receive after discharge.

Q3: What is the evidence on savings for Medicare bundled payment models?

BPCI Model 1, which focused on Medicare hospital admissions in its bundle, achieved modest net savings ($10 million across two years), attributable mostly to discounted Medicare payments to hospitals. Notably, Medicare spending on care following hospitalizations was higher for the test episodes than the comparison group. Most hospital participants ultimately withdrew and the model has ended.

Further analysis of the hip/knee replacement episodes shows that BPCI participants had lower Medicare spending for facility-based post-acute care, such as skilled nursing facility (SNF) care, but not for home health care, which is typically less expensive.

For the newer model, the CJR model, which was mandatory for 800 hospitals and focused on hip and knee replacements, Medicare spending results are limited. Analysis of CMS data shows that in the first year of the program, about half of the hospitals received “reconciliation payments” indicating that they received added payments from Medicare because their spending was below their target benchmark in 2016. Reconciliation payments totaled $37.6 million, averaging $1,134 per episode. No spending information is available for hospitals that did not receive reconciliation payments.

Notably, episode-based spending results, including those reported for the CJR model and BPCI, do not account for changes in the number of episodes per participating provider. Therefore, any changes in the overall volume of episodes could have additional spending effects on Medicare. For specific results and more details about each model, see the Bundled Payment Side-by-Side comparison tool.

Q4: What is the evidence on quality for Medicare bundled payment models?

Quality results varied by clinical episode and model, but generally did not reveal major differences between the BPCI models and comparison groups. However, in BPCI Model 3, evaluation results showed increased rates of unplanned readmissions, emergency department use, and mortality (though greater patient complexity may have biased mortality results somewhat) for SNF-based BPCI participants relative to comparison groups. In contrast, for other measures, including functional improvement and patient-reported experience, these BPCI participants showed either greater improvement or no statistical differences.

For the CJR model, quality results are limited. CMS data show that in the first year of the program, among the hospitals that received any reconciliation payments for lower episode spending, 39 percent were classified as “excellent”; 53 percent as “good”; 8 percent as “acceptable”; and none as “below acceptable.” In general, these classifications were based on CMS analysis of medical complications and patient-reported assessments for each hospital. No quality information is available for hospitals that did not receive reconciliation payments.

In 2015, Congress enacted the Medicare Access and CHIP Reauthorization Act (MACRA), which changed the Medicare payment system for physician services. In this law, physicians and other health professionals who are affiliated with “advanced alternative payment models” (APMs) are eligible for automatic 5-percent bonuses on their Medicare payments, starting in 2019. Two bundled payment models—namely, the Comprehensive Care for Joint Replacement (CJR) model and the Oncology Care Model (OCM)—qualify as advanced APMs, either in full or in part. Several other models (specifically, the AMI model, CABG model, and SHFFT model) would have qualified as advanced APMs in 2018, but CMS canceled them before they began. CMS recently announced that “BPCI Advanced,” which starts in October 2018, is expected to meet the qualifications required by MACRA to be an Advanced APM.

For 2017, CMS reports that 987 hospitals/practices and another 1,019 “episode initiator” organizations are participating in Medicare bundled payment models. Models are active in nearly all states and the District of Columbia. Bundled payment models are more prevalent in the eastern half of the country, but are also concentrated along the west coast, with others located in Alaska and throughout the Midwest. 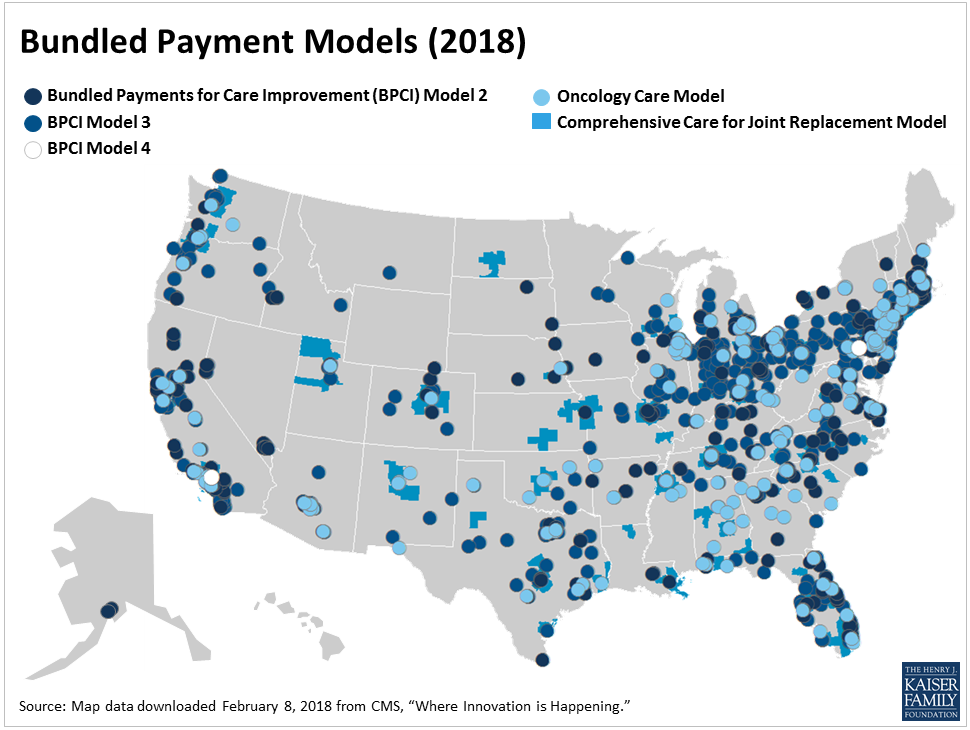 Q7: How many Medicare beneficiaries have received care in bundled payment models?

BPCI Model 1 accounted for over 240,000 beneficiary episodes among participating hospitals during its first two years. Models 2-4, for which only first year results are available, accounted for about 61,000 episodes, with the majority (74%) initiated under Model 2. Although beneficiary episodes are not an exact match to the number of beneficiaries receiving care in bundled payment models, it is likely a close estimate. To learn more about the number of beneficiaries in other models and how bundled payment models compare, see the Bundled Payment Side-by-Side comparison tool. 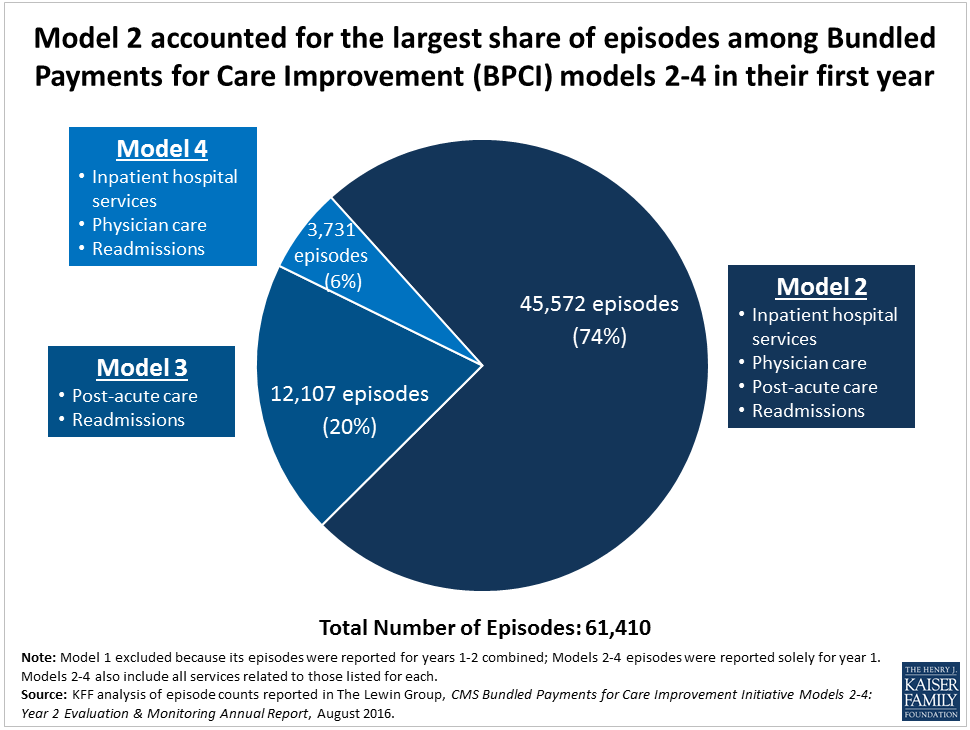 Q8: When did each Medicare bundled payment model start and end?

BPCI started in 2013. Model 1 concluded in December 2016, but the other three BPCI models were extended into 2018. The other ongoing models—the CJR model and the OCM—will be active at least through 2020. The Episode Payment Models (AMI, CABG, and SHFFT models) and the Cardiac Rehabilitation Incentive Payment model were slated to begin in 2018, but CMS recently canceled them before they started. CMS recently announced the second iteration of BPCI – “BPCI Advanced” – which will start October 1, 2018 and run through 2023.