This was published as a Wall Street Journal Think Tank column on November 4, 2015. 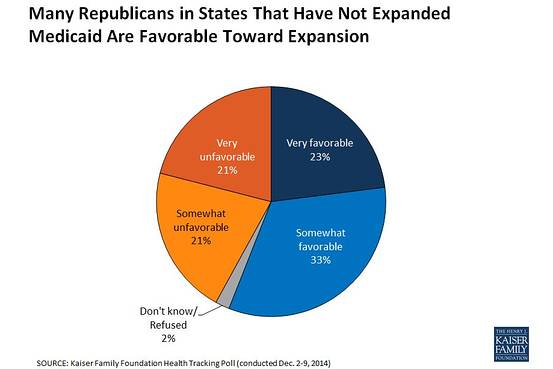 Kaiser Family Foundation polling in December 2014 found that many Republicans in states that have not expanded Medicaid have favorable views of expansion.

We don’t know yet whether Republican Matt Bevin, who was elected governor of Kentucky on Tuesday, will try to abolish the Medicaid expansion put in place by outgoing Gov. Steve Beshear (D.), attempt to cap enrollment, or do nothing at all. But his election sets up new discussion of Republican attitudes toward Medicaid expansion.

Thirty states have expanded Medicaid under the Affordable Care Act since the Supreme Court made it a state option in 2012. Ten of them have Republican governors, two of whom are presidential candidates, John Kasich and Chris Christie. If, however, you follow campaign commentary on cable TV you would think expanding Medicaid is a political black mark in the eyes of all Republicans. To be sure, the most activated elements of the GOP base–conservative campaign contributors, super PACs, and conservative legislators–oppose Medicaid expansion, primarily because they see it more as embracing Obamacare than providing federal funding to states to help them expand coverage for low-income residents. But the limited polling the Kaiser Family Foundation has done on the issue has found that most Republicans do not oppose Medicaid expansion. In fact, they favor it.

In a December 2014 poll, 52% of Republicans said they had a favorable view of Medicaid expansion, 44% had an unfavorable view, and 3% did not voice an opinion. In the same poll, as the chart above shows, 56% of Republicans in states that had not expanded Medicaid had a very favorable (23%) or somewhat favorable (33%) view of expansion. This survey was conducted too far in advance of the 2016 primary elections to poll likely Republican voters. Views were also different in two strongly anti-expansion states in polling Kaiser did with the New York Times in 2014. A majority of Republicans in Louisiana (66%) and North Carolina (53%) preferred that their state keep Medicaid as is.

That even a slim majority of Republicans favor expansion is notable given the tone of debate on this issue on the campaign trail, where expansion has become like a third rail for GOP candidates. This is not to suggest that Republican candidates or governors who oppose Medicaid expansion in conservative states will be anxious to flip any time soon. But Medicaid may not be as unpopular with Republicans overall as the conventional wisdom suggests, and other issues may be more salient for Republican voters in primary and general elections across the country than opposition to Medicaid expansion.