Covering the Remaining Uninsured: Not Just a Red-State Issue

This was published as a Wall Street Journal Think Tank column on October 14, 2015. 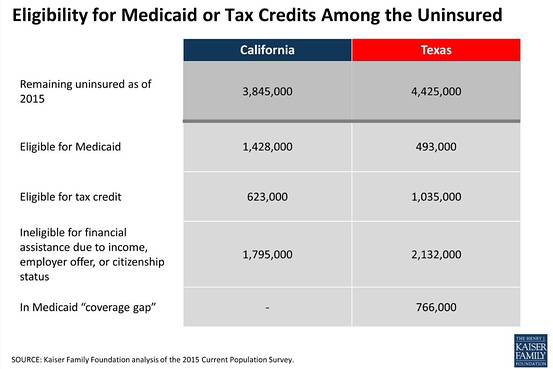 Kaiser Family Foundation analysis of 2015 Current Population Survey data on eligibility for Medicaid or tax credits among the uninsured in California and Texas.

About 32 million people in the U.S. remained uninsured as of early 2015, a Kaiser Family Foundation analysis of federal survey data has found, with about half of them eligible for Medicaid or subsidies under the Affordable Care Act. With the high-profile resistance in some states to Medicaid expansion and the ACA generally, you may think those places are the main obstacle to covering more of the uninsured. But the uninsured remain a problem in both red and blue states.

About half of the remaining uninsured, 16 million people, are in mostly blue states that have expanded Medicaid. The other 16 million are in states that have not expanded Medicaid and where there is strong anti-ACA sentiment. Consider the examples of California and Texas, the states with the largest populations of remaining uninsured, to understand the different challenges.

There were 3,845,000 uninsured in California, a famously blue state, in early 2015. The largest share of those, about 1,428,000, were eligible for Medicaid but not enrolled; 623,000 were eligible for federal tax credits to help purchase coverage in the Covered California marketplace; and 1,795,000 were ineligible because of their immigration status, or an offer of insurance through work, or because their incomes were too high to qualify for assistance. There is no “Medicaid gap” in California. The state has expanded its Medicaid program, called Medi-Cal, under the ACA. The 1.4 million residents eligible for Medi-Cal but not enrolled represent the largest opportunity to extend coverage to a low-income population. But California is already struggling to pay for unexpected and unbudgeted Medicaid enrollment. Proposals in the legislature would make undocumented residents eligible for Medicaid at state expense, but the legislation’s prospects are unclear. Next year California will begin extending Medi-Cal coverage to about 170,000 undocumented immigrant youths up to age 19.

Now consider Texas, where there were 4,425,000 uninsured in 2015, the largest uninsured population in any state. Of those, 495,000 were eligible for Medicaid and more than twice that many–1,035,000 people–were eligible for tax credits. About 2,132,000 of the uninsured in Texas were ineligible for ACA assistance, and 766,000 were in the “coverage gap.” Texas is an anti-ACA state that has resisted expanding Medicaid. Aggressive outreach by community organizations and insurers to provide federally funded tax credits to the 1 million eligible Texans to help them purchase coverage on the federally operated marketplace would seem to be the best opportunity to expand coverage in that state, unless political changes create a more favorable environment for Medicaid expansion.

Some elements of the remaining uninsured problem are uniquely a red state issue. The most prominent of these are 3.1 million people—or one in 10 of the uninsured—who fall in the “coverage gap” in 20 red states that have chosen not to expand Medicaid coverage.  But as the examples of Texas and California demonstrate, progress on covering the remaining 32 million uninsured will depend on action in both red and blue states.