At the end of March 2021, the Biden Administration announced the American Jobs Plan, which includes $400 billion to expand access to Medicaid home and community-based services (HCBS) for seniors and people with disabilities and strengthen the direct care workforce. The Better Care Better Jobs Act, recently introduced by Democratic lawmakers, outlines three provisions to implement President Biden’s American Jobs Plan HCBS proposal. The major provision is a new “HCBS Infrastructure Improvement Program,” which offers permanent enhanced federal Medicaid matching funds for HCBS if states choose to participate and meet certain requirements. The other provisions would make both Money Follows the Person and the requirement for states to apply spousal impoverishment protections to HCBS permanent.

HCBS assist with self-care, such as eating and bathing, and household activities, such as preparing meals, for people who need help with these tasks due to health or functional needs. Most HCBS are provided through Medicaid and are not covered by other payers, including Medicare. States can offer Medicaid HCBS as state plan benefits, which must be provided to all enrollees who qualify, and waivers, which allow states to target services to specific populations, expand income and asset limits, and set enrollment caps. The new proposal responds to growing demands for HCBS stemming from the disproportionate number of COVID-19 cases and deaths among people in nursing homes and other congregate settings, the growing elderly population, and the unmet need for community-based care that preceded the pandemic.

The proposal also aims to expand and strengthen caregiving jobs supported by Medicaid HCBS. Like people who rely on HCBS, direct care workers who provide these services have been disproportionately affected by the pandemic. The workforce is predominantly female, low-wage, and people of color. Home care workers earned on average $11.52 per hour, or $16,200 per year, in 2018. Despite the ongoing unmet need for HCBS, which is expected to grow with the increasing senior population, states regularly cite workforce shortages as a barrier to expanding HCBS. This issue brief places the American Jobs Plan in the context of current Medicaid HCBS spending and considers how policymakers might allocate the new funding (Figure 1), drawing on the provisions of the recently introduced Better Care Better Jobs Act. 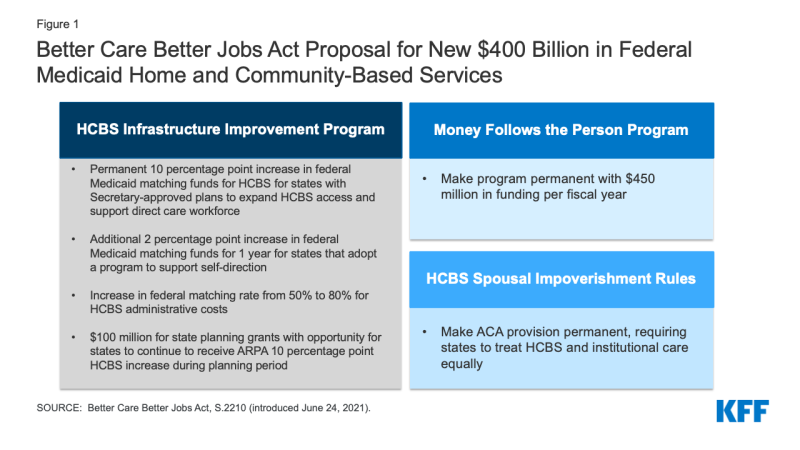 How much does Medicaid spend for HCBS?

Medicaid HCBS spending is estimated to be about $114 billion in FY 2021, before the increase from the American Rescue Plan Act (ARPA) (discussed below). Medicaid funds the majority (57%) of HCBS, with private insurance covering 12% and 7% paid out-of-pocket.1 State Medicaid programs must cover long-term services and supports (LTSS) in nursing homes, while most HCBS are optional, resulting in substantial variation across states. State HCBS programs face a number of challenges, including waiting lists for waiver services, direct care workforce shortages (which predated and have been exacerbated by the pandemic), and a lack of affordable, accessible community-based housing. Nationally, more than half of Medicaid LTSS spending is for community-based care. Like other Medicaid services, costs are shared between the states and the federal government.

The ARPA provides an additional 10 percentage point increase in federal matching funds for state spending on HCBS from April 2021 through March 2022, an estimated $11.4 billion increase in federal spending nationally. Under the ARPA, states must maintain their current spending levels and use the increased funds “to enhance, expand, or strengthen” HCBS. Due to the 1-year time limit on ARPA funds, states may be more likely to adopt policies to directly address the pandemic, such as providing hazard or overtime pay to direct care workers or offering targeted services such as home-delivered meals or assistive technology, as opposed to dedicating funds to serving more HCBS enrollees over the longer-term.

The new $400 billion in federal funds from the American Jobs Plan proposal could increase annual spending for HCBS in Medicaid by at least 33% annually, and by even more if state spending also increases. If the new funding were evenly spent over the next 10 years and allocated entirely through the Medicaid program, that would equate to new federal HCBS spending of $40 billion per year on top of the $114 billion baseline plus the $11.4 billion from the ARPA.

How could new HCBS funds be used?

The Better Care Better Jobs Act, recently introduced by Democratic lawmakers, outlines three provisions to expand and strengthen Medicaid HCBS and the direct care workforce, as proposed in President Biden’s American Jobs Plan (Figure 1). The major provision, which would account for most of the funding, is a new “HCBS Infrastructure Improvement Program,” which offers permanent enhanced federal Medicaid matching funds for HCBS if states choose to participate and meet certain requirements. The other provisions would make both Money Follows the Person and the requirement for states to apply spousal impoverishment protections to HCBS permanent.

The HCBS Infrastructure Improvement Program proposed in the Better Care Better Jobs Act includes a permanent 10 percentage point increase in federal Medicaid matching funds for HCBS for states with Secretary-approved plans to expand and strengthen HCBS.2 Like the temporary ARPA increase, the new increase would stack on top of other increases and be capped at 95%. The new program is designed so that states could continue to access an additional 10 percentage point increase in federal funding for HCBS after the ARPA provision expires (Figure 2). 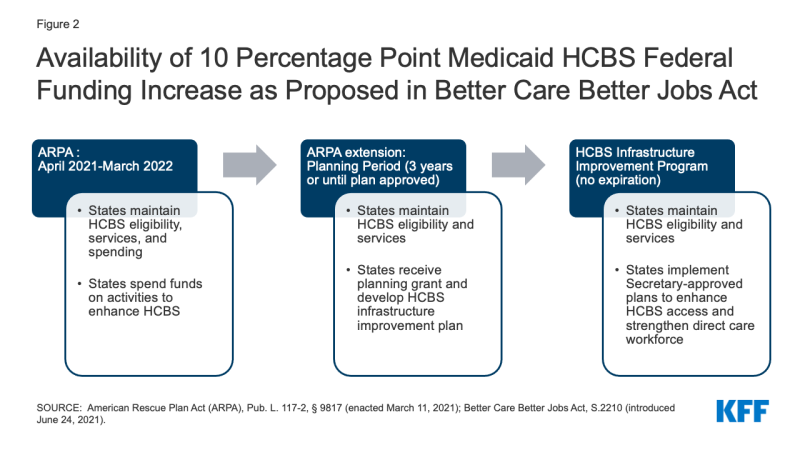 The bill allows states to continue to receive a 10 percentage point increase in federal Medicaid matching funds for HCBS after the ARPA provision expires, while states are developing their HCBS Infrastructure Improvement Program plans. States must continue to maintain existing HCBS eligibility and benefits while receiving the enhanced federal funds. The bill includes $100 million for state planning grants to be awarded within one year of enactment. States would have two years to submit their plans, and the Secretary is directed to approve plans as long as they are complete and contain assurances that states will meet the program requirements. State plans must describe their current Medicaid HCBS program, how the state will meet annual measures and benchmarks, and the state’s goals for improving HCBS. Plans must consider people currently on Medicaid HCBS waiver waiting lists as well as those who would be eligible but are not currently on a waiting list and any HCBS that are provided in other states but not in the planning grant state.

States with Secretary-approved HCBS Infrastructure Improvement Plans could continue to receive the 10 percentage point increase in federal matching funds for HCBS as they implement their plans. Specifically, states would have to continue to maintain existing HCBS eligibility and benefits as well as engage in activities to expand HCBS access,3 strengthen the direct care workforce,4 and monitor HCBS quality (Figure 3). States also would have to provide an annual report on their HCBS program to the Secretary beginning in the 5th fiscal year of their program participation. Additionally, states would have to report on the following four benchmarks to continue receiving the enhanced federal funds after seven years of program participation: 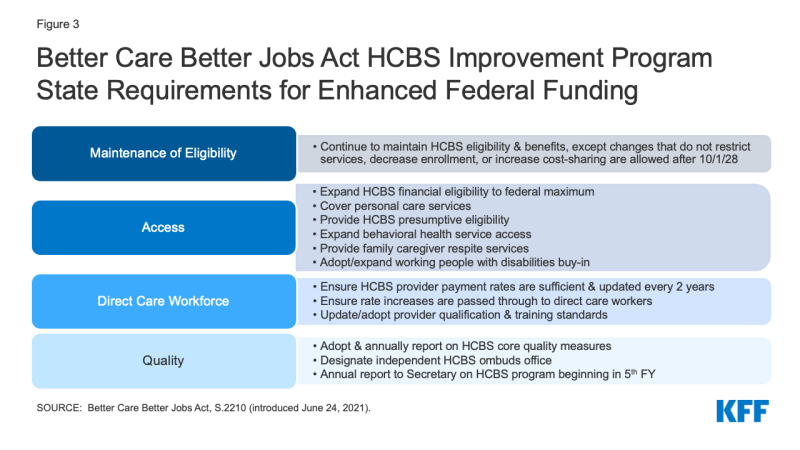 States with Secretary-approved plans also could receive additional enhanced federal matching funds to support self-direction and for HCBS administrative costs. States that adopt a program to support self-direction could receive an additional two percentage point increase in federal matching funds for one year, capped at 95%. Self-direction program activities include offering a worker registry and independent provider recruitment and training, engaging in quality oversight, coordinating with other state agencies and providers, establishing an “agency with choice” model, supporting family caregivers (if the state allows them to be paid providers), and ensuring that state policies allow for cooperation with or are neutral toward organized labor. Separately, all states with Secretary-approved plans could receive enhanced federal funds for administrative costs, increased from 50% to 80%. Administrative costs could include data and technology infrastructure, modifications to rate setting processes, quality measures, worker training, and worker registries.

Extending Medicaid’s Money Follows the Person (MFP) program is the one specific policy proposal in the American Jobs Plan, and the Better Care Better Jobs Act would make MFP permanent. MFP provides enhanced federal matching funds that, from 2008 through 2019, have helped over 101,000 seniors and people with disabilities across 44 states and DC moving from nursing homes to the community. States can fund services, such as first month’s rent and household set-up costs, and staff to help enrollees locate community housing. Program evaluations have found improved enrollee quality of life and cost savings after moves from institutions to the community, though repeated short-term extensions have created uncertainty for states. Affordable and accessible housing for low-income seniors and people with disabilities remains in short supply and presents a barrier to deinstitutionalization. While Medicaid does not pay for housing, many states have used MFP funds to hire housing coordinators to collaborate with affordable housing agencies and assist enrollees with locating community-based housing. A federal evaluation of MFP showed about 5,000 new participants in each six month period from December 2013 through December 2016, indicating a continuing need for the program. The aging of the population will also increase demand for the program. MFP currently expires in September 2023, with federal funding since 2007 totaling just under $6 billion over the entire period5 (a relatively small amount compared to the proposed $400 billion). The Better Care Better Jobs Act includes $450 million in federal funding for MFP for each fiscal year after FY 2021.

A KFF survey found that, as of 2018, some states may stop applying the spousal impoverishment rules to HCBS if Congress allowed the ACA provision to expire. At that time, 14 states expected that allowing the ACA provision to expire would affect Medicaid HCBS enrollees, for example by making fewer individuals eligible for waiver services. Additionally, eight states reported that the repeated temporary extensions resulted in confusion among enrollees and/or increased workload or administrative burdens for states.

If enacted, the American Jobs Plan HCBS proposal, as outlined in the Better Care Better Jobs Act, could build on the ARPA by adding further federal support for state efforts to increase access to Medicaid HCBS. With additional federal dollars available over a longer timespan, compared to the 1-year ARPA, states could be incentivized to expand HCBS eligibility by adopting new optional pathways, raising existing income or asset limits, or increasing waiver enrollment caps to serve more people and reduce waiting lists. States also could offer new optional HCBS, increase the scope of currently covered services, expand opportunities for enrollees to self-direct services, or offer supports to family caregivers such as respite care. Such initiatives could address Medicaid’s historical institutional bias by working to equalize access to HCBS. Expanding Medicaid HCBS also can help people with disabilities participate in the workforce, by offering services such as attendant care or supported employment, and help family members remain in the workforce instead of leaving paid employment to care for a child with disabilities or an aging relative. This proposal would mean an unprecedented $400 billion increase in federal spending on home and community-based services, and will likely face competition with other priorities as Congress considers a sweeping budget measure this year.

The new proposal could be an incremental step toward a larger goal of eliminating Medicaid’s historical institutional bias and making HCBS mandatory. In the near term, states, providers, health plans, and seniors and people with disabilities who need HCBS will be watching to see how the American Jobs Plan and the Better Care Better Jobs Act proposals continue to take shape in Congress. The new proposal includes a number of activities and benchmarks for states to meet, but also provides access to significant new funding through a permanent increase in federal Medicaid matching funds for HCBS, which could incentivize states to participate.