The unmet need for HCBS for seniors and people with disabilities pre-dates the COVID-19 pandemic, with Medicaid serving as the primary source of coverage for HCBS. These services are unaffordable out-of-pocket for many people and unavailable through private insurance or Medicare. The pandemic’s disproportionate impact on seniors and people with disabilities, particularly those living in congregate settings such as nursing homes, has brought heightened focus on the need for additional HCBS, and the growing elderly population in the coming years will further intensify the need for these services. Over the last several decades, states have focused on shifting the Medicaid program’s historical bias toward institutional services by devoting an increasing share of their total long-term services and supports (LTSS) spending to HCBS. Spending on HCBS surpassed spending on institutional care for the first time in FY 2013 and comprised 56% of total Medicaid LTSS spending in FY 2018, with substantial variation among states.

The American Rescue Plan, the COVID relief package recently signed into law by President Biden, includes a provision to increase the federal matching rate (FMAP) for spending on Medicaid HCBS by 10 percentage points from April 1, 2021 through March 31, 2022 provided states maintain state spending levels as of April 1, 2021. To access the new funds, recent guidance requires states to submit for CMS approval an initial HCBS spending plan projection and narrative by June 12, 2021, though CMS recently announced that states could request a 30-day extension for their initial submission due date. This brief discusses the new provision and provides state by state estimates of the potential effects of the policy change.

What does the American Rescue Plan do for HCBS?

The HCBS provision in the American Rescue Plan increases the federal matching rate (FMAP) for Medicaid HCBS spending by 10 percentage points from April 1, 2021 through March 31, 2022. The law specifies that states must use the enhanced funds to “implement, or supplement the implementation of, one or more activities to enhance, expand, or strengthen” Medicaid HCBS. CMS guidance released on May 13, 2021 confirms that the enhanced funds must be used for activities “beyond what is available under the [state’s] Medicaid program as of April 1, 2021.” While the final version of the law did not detail specific activities, the CMS guidance provides a non-exhaustive list of initiatives that states might fund, including activities to meet HCBS needs created by COVID-19 and activities to build state HCBS capacity and advance LTSS rebalancing reforms. For example, in response to COVID-19, states might use the enhanced funds to expand covered services to reduce the risk of institutionalization, facilitate COVID-19 vaccine access for HCBS enrollees, or support the direct care workforce. To build HCBS capacity and advance LTSS rebalancing, states might streamline eligibility and enrollment processes, increase covered services, expand the direct care workforce, or serve additional HCBS enrollees. (Figure 1). States have until March 31, 2024 to spend the enhanced funds. The Appendix Table contains a detailed summary of the activities included in the CMS guidance. 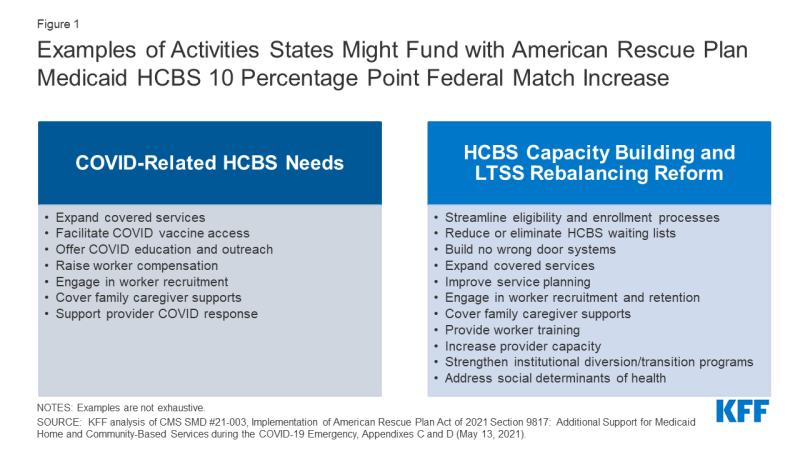 The law increases the total dollars available for Medicaid HCBS, as states are required to maintain their current HCBS spending to qualify for the enhanced federal funds. Specifically, states must maintain their level of HCBS spending as of April 1, 2021. CMS guidance confirms that states “cannot use state funds equivalent to the amount of federal funds made available by the increased FMAP to pay for HCBS that [are] available under the[ir] Medicaid program as of April 1, 2021.” The Appendix provides more detail about the conditions states must meet to satisfy this requirement according to CMS guidance. The proposed 10 percentage point increase for HCBS will be added to the state’s regular Medicaid matching rate (which ranges from 50% to 78% in FY 2022), as well as to other FMAP increases available to states, including the 6 percentage point increase for Community First Choice attendant care services, the 6.2 percentage point increase provided to address the COVID-19 public health emergency (PHE) under the Families First Coronavirus Response Act, any disaster recovery FMAP (available to states with a federally declared disaster and a certain amount of FMAP decline), and the 90% federal matching rate for Medicaid expansion adults under the ACA, as well as the new 5 percentage point increase in the regular matching rate for states newly adopting the ACA expansion provided in a separate section of the law. The cumulative enhanced matching rate for Medicaid HCBS under the law is capped at 95%.

What is the estimated effect of the American Rescue Plan HCBS funding for states?

We estimate that nationally, federal spending for HCBS could increase by about $11.4 billion (Table 1). This estimate is similar to that put out by the Congressional Budget Office, which estimated increased federal costs of approximately $12.7 billion. In the time period that the FMAP increase would be in effect (the final two quarters of FY 2021 and the first two quarters of FY 2022), we estimate that total federal and state Medicaid HCBS spending will be approximately $114 billion (Table 1). Estimated total Medicaid HCBS spending varies widely by state, ranging from $198 million dollars in Wyoming to nearly $22 billion in California. The additional $11.4 billion federal dollars from this FMAP increase would be distributed proportional to the size of state HCBS programs, with California receiving nearly $2.2 billion additional federal dollars and Wyoming receiving about $19.8 million additional federal dollars. This wide state variation reflects both state size and various state policy choices on HCBS programs, nearly all of which are offered at state option.

These estimates are made with a degree of uncertainly. Our estimates reflect HCBS spending in FY 2021 and FY 2022 based on inflation rates from CBO’s projected spending on Medicaid LTSS. However, these estimates do not account for states expanding underlying HCBS spending beyond current levels due to the additional federal incentive. Additionally, some spending in some states may not be eligible for the full increase, should the state hit the 95% federal match cap, after accounting for the 10 percentage point increase in the bill as well as other enhanced matching rates available to states, such as the enhanced match for the ACA Medicaid expansion group. These estimates assume that all states maintain their current spending levels, as required by the law.