Facebook Twitter LinkedIn Email Print
Medicare, the federal health insurance program for people age 65 and older and younger adults with permanent disabilities,1 is an important source of health coverage for people with HIV.2  As the size of U.S. HIV positive population has grown over time, due to an increased lifespan for people with HIV but also a steady number of new infections, so too has the number of Medicare beneficiaries with HIV. Both the Medicare Modernization Act of 2003 and the Affordable Care Act (ACA), signed into law in 2010, included a number of important provisions related to Medicare and its role for people with HIV. Key facts about Medicare and HIV include: 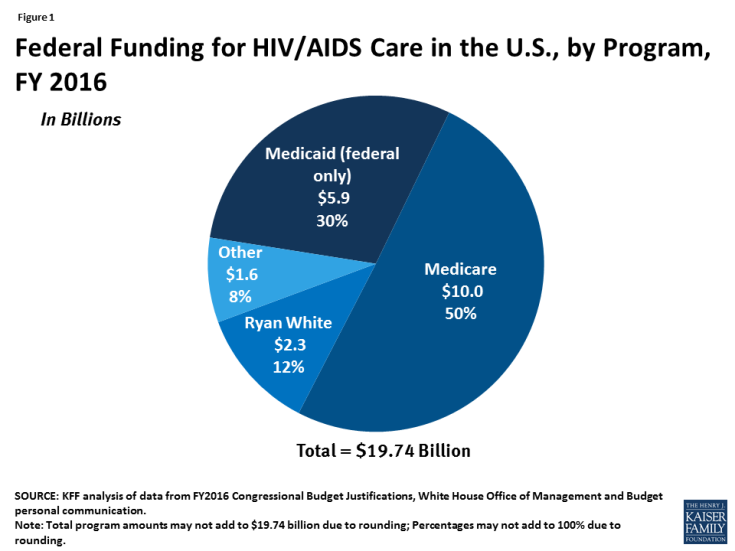 Medicare enrollees with HIV are increasing in number but make up only a small share (<1%) of the overall Medicare population. Of the 120,000 traditional (fee-for-service)6 Medicare beneficiaries estimated to be HIV positive, nearly eight in 10 (79%) are under age 65 and qualify for Medicare because they are disabled and receiving Social Security Disability Insurance (SSDI) payments, which entitle them to Medicare after a two-year waiting period.  By comparison, only 17% of Medicare beneficiaries overall qualify based on disability. The remaining 21% of beneficiaries with HIV are ages 65 and older, almost two thirds (63%) of whom first became eligible for the program based on age alone.

Medicare Eligibility for People with HIV

The three main pathways to Medicare eligibility are based on age, disability, and disease state and in most cases require an enrollee to have sufficient work credits based on their employment history (see Table 1). 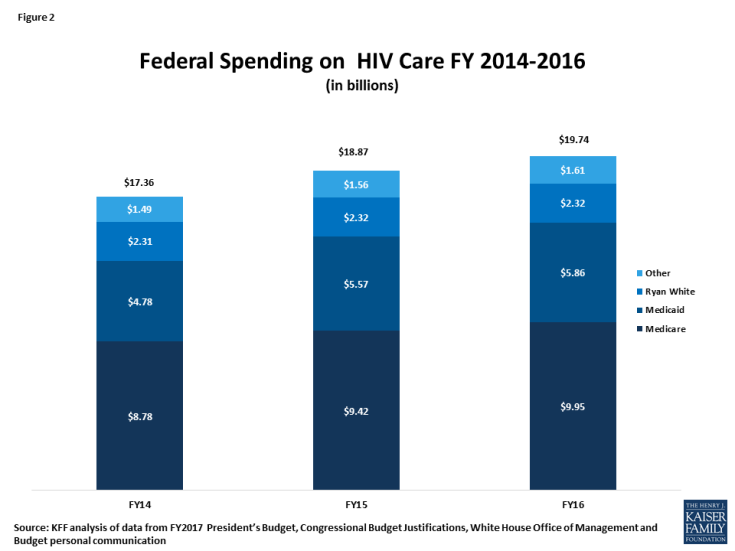 Medicare provides broad coverage of many basic health care services, including hospital care, physician services, and prescription drugs. Medicare benefits are organized and paid for in different ways and are separated into four parts (see Table 2)1

While Medicare provides coverage of important medical benefits, it has relatively high cost-sharing requirements, no cap on out-of-pocket spending under traditional Medicare for services covered under Parts A and B, and does not cover all services that may be important to people with HIV, such as long-term care and dental.  Because of this, many HIV positive beneficiaries need additional cost-sharing assistance. Part D offers premium and cost-sharing assistance for beneficiaries with low incomes and modest assets through the low income subsidy (LIS) program and in 2014, 77% of HIV positive Medicare beneficiaries qualified for this benefit. In addition, Medicaid provides supplemental coverage that helps to cover premiums and cost sharing for low-income dual beneficiaries. Finally, the Ryan White HIV/AIDS Program can also help eligible HIV-positive beneficiaries with health coverage expenses. Medicaid, the Ryan White Program, and other payers may also provide additional services, such as case management and transportation assistance, that Medicare does not provide.

Among services covered by Medicare that are important to people with HIV are:

Medicare, the largest source of federal spending on HIV care, will continue to play a growing role for people with HIV as the population ages and life expectancy increases. As such, it will be important to continue to monitor Medicare’s role for people with HIV, particularly the Part D prescription drug benefit as well as Medicare’s interaction with the Medicaid and Ryan White programs.  More generally, as policymakers consider numerous proposals to change Medicare—to address concerns about its future financial solvency amidst a growing aging population and increasing per capita costs—it will be important to assess how such changes could affect access for people with HIV. Of particular note, proposals to reduce drug costs could be especially significant for HIV positive beneficiaries who face high out-of-pocket costs.