Tuberculosis, an infectious disease caused by bacteria, is a leading cause of death worldwide, despite being preventable and often curable. Approximately a quarter of the world’s population has “latent” TB, meaning they have been infected by TB bacteria, but are not yet ill with the disease and cannot transmit it (see box below); about 10.0 million develop “active” TB each year, which can be spread to others. When a person with active TB coughs, sneezes, or spits, the bacteria spreads into the air where it may be inhaled by and infect others.1 According to the World Health Organization (WHO), people with active TB can infect up to 5-15 other people through close contact over the course of a year.2 TB is found all over the world, though the vast majority of TB cases are concentrated in developing countries.3

Tuberculosis (TB):4 A bacterial infection caused by Mycobacterium tuberculosis. Not all people who become infected with TB will develop symptoms. Those who do not become ill are referred to as having “latent TB” and cannot spread the infection to others, while those who become ill with “active TB disease” have symptoms like coughing (sometime with sputum or blood), chest pains, weakness, weight loss, fever, and night sweats. The disease usually affects the lungs, but in serious cases, it can affect other parts of the body and, if not treated properly, can be fatal.

In the 1990s and early 2000s, concern about rising incidence in some areas, new outbreaks, TB/HIV co-infection, and the emergence of TB drug resistance prompted key global health actors and governments, including the U.S. government, to make preserving and advancing the progress of global efforts against TB a priority.5 In 1993, WHO declared TB to be a global health emergency.6 Since then, global efforts to address TB have become more prominent, and global TB incidence and mortality rates have fallen.7 Still, significant challenges remain, and efforts focus on achieving new global TB goals, including ending the epidemic.

In 2018, there were 10.0 million new cases of people who developed active TB disease (see Table 1). Although active TB is treatable and curable in most cases,8 an estimated 1.45 million people died from TB in 2018, including an estimated 251,000 who were HIV-positive. Globally, between 2000 and 2018, TB incidence fell by approximately 1.6% per year. Between 2015-2018, global TB mortality fell by 11%.9 Still, detecting TB cases – and then linking diagnosed cases to treatment — remains a significant challenge.10

Nearly all cases (97%) occur in low- and middle-income countries, particularly in South-East Asia, Africa, and the Western Pacific, as do most deaths. Additionally, thirty countries that have been designated by WHO as having high numbers of TB cases, otherwise known as high burden countries (HBCs), collectively account for approximately 87% of new TB cases globally.

WHO reports that while people of all ages are at risk, TB mostly affects adults during “their most productive years,” posing significant challenges to the livelihoods of individuals as well as to developing economies.13 Additionally, people who suffer from other conditions that impair the immune system (e.g., HIV) are at a higher risk of developing active TB, as are people who use tobacco.14 People in resource-poor settings, especially those living in poverty or in crowded living conditions with poor ventilation (e.g., prisons or mines), are disproportionately affected.15

TB and HIV are frequently referred to as co-epidemics (or dual epidemics) due to their high rate of co-infection. TB is a leading cause of death among people with HIV, especially in developing countries.16 In 2018, an estimated 862,000 of the 10.0 million new active TB cases affected people who were also HIV-positive, and of the 1.45 million people who died from TB, an estimated 251,000 were HIV-positive.17

Drug-resistant TB has emerged as a major challenge to global TB control efforts. Cases that fail to respond to standard first-line drugs are known as multidrug-resistant TB (MDR-TB), while those that fail to respond to both first- and second-line drugs are known as extensively drug-resistant TB (XDR-TB).18 In 2018, an estimated 484,000 people developed resistance to rifampicin, the most effective first-line drug, and of these, 78% had MDR-TB.19 Among cases of MDR-TB in 2018, WHO estimates that 6.2% of these cases were XDR-TB.

The End TB Strategy, the internationally-recognized strategy for ending the TB epidemic, outlines interventions aimed at decreasing TB-related morbidity, death, and transmission. They include:

Other interventions include the development of policies and systems that support TB activities, such as improved standardized data collection, quality assurance and rational use of drugs, and monitoring and evaluation of outcomes; sustained political and financial commitment to TB efforts; health systems strengthening; and increased health workforce capacity to respond to TB.

Since the 1993 declaration of TB as a global health emergency by WHO,23 major global TB goals have most recently been set through:

Adopted in 2015, the Sustainable Development goals (SDGs) aim to end the TB epidemic by 2030 under SDG Goal 3, which is to “ensure healthy lives and promote well-being for all at all ages.”24 The SDGs are the successor to the Millennium Development Goals (MDGs), which included a tuberculosis target under MDG 6: to halt and begin to reverse the incidence of TB by 2015.25

Endorsed by governments at the 2014 World Health Assembly, the End TB Strategy set an overarching goal of ending the global TB epidemic as well as targets for achieving, by 2035, a 95% reduction in TB deaths and a 90% reduction in TB incidence (compared with 2015 levels).26 It builds on the earlier 2006 international Stop TB Strategy,27 in which WHO outlined the goal of eliminating TB as a public health problem by 2050.28 The Global Plan to End TB outlines the steps and resources needed to achieve the End TB Strategy’s goals and is periodically updated by the Stop TB Partnership (an international network of public and private entities working to eliminate TB).29

Most recently in 2018, the U.N. General Assembly held its first-ever high-level meeting on TB, where world leaders adopted a new Political Declaration that reaffirmed global TB commitments, including the global target to successfully treat 40 million people with TB and provide preventative therapy to 30 million people by 2022.30

U.S. involvement in global TB efforts was relatively limited until the late 1990s. Since that time, its efforts to address TB have grown, and now the U.S. is one of the largest donors to global TB control.31

In 1998, the U.S. Agency for International Development (USAID) began a global TB control program, and over the following decade, the U.S. assigned a heightened priority to and provided greater funding for bilateral and multilateral TB efforts.32

The passage of the legislation that launched the President’s Emergency Plan for AIDS Relief (PEPFAR) in 2003 placed a heightened priority on U.S. global TB efforts that continues to this day. The U.S. Leadership Against HIV/AIDS, Tuberculosis, and Malaria Act of 2003 (the legislation that created PEPFAR) included TB under its umbrella, authorizing five years of funding for bilateral TB efforts and the Global Fund to Fight AIDS, Tuberculosis and Malaria (an independent, international financing institution created in 2001 that provides grants to countries to address TB, HIV, and malaria). The Lantos-Hyde U.S. Global Leadership Against HIV/AIDS, Tuberculosis, and Malaria Reauthorization Act of 2008, which reauthorized PEPFAR, set targets for U.S. bilateral TB efforts and authorized another five years of funding.33 See the KFF fact sheet on PEPFAR, the KFF fact sheet on the Global Fund, and the KFF brief on PEPFAR reauthorization.

Most recently, the U.S. government has affirmed that its TB efforts are working toward achievement of the 2022 goal, established at the U.N. High-Level Meeting on TB, of treating 40 million people with TB and providing preventative therapy to 30 million people.35

The U.S. has also placed a heightened emphasis on addressing antimicrobial resistance (i.e., drug resistance). 36 In 2015, the U.S. released its National Action Plan for Combating Multidrug-Resistant Tuberculosis, which identifies interventions and articulates a strategy to respond to the domestic and global challenges of MDR-TB.37 Most recently, at the U.N. High-Level Meeting on TB in 2018, the National Institutes of Health (NIH) released the Strategic Plan for Tuberculosis Research, which aims to accelerate its TB research including MDR-TB research.38

The U.S. Agency for International Development (USAID) serves as the lead implementing agency for U.S. global TB efforts, with other agencies also carrying out TB activities. Collectively, these efforts reach more than 50 countries, including at least 20 of the 30 high burden countries (HBCs).39 All U.S. global TB efforts are coordinated under the international working group of the Federal Tuberculosis Task Force (a coalition of federal agencies involved in U.S. global and domestic TB efforts).40

USAID’s bilateral TB program aims to support specific country needs41 in 23 priority countries where it currently carries out TB efforts, which are mainly in sub-Saharan Africa, South Asia, and Southeast Asia, and to focus on key interventions, including:

The agency reports that in USAID-supported countries, TB incidence and TB-related mortality have decreased by 27% and 44%, respectively, since 2000.42

The U.S. also supports TB activities through several other agencies, including:

The U.S. partners with international institutions and supports global TB funding mechanisms. Key partners include WHO and the Stop TB Partnership. Additionally, the U.S. government is:

All TB funding is counted as part of PEPFAR, which also includes funding for U.S. global HIV/AIDS efforts and contributions to the Global Fund. 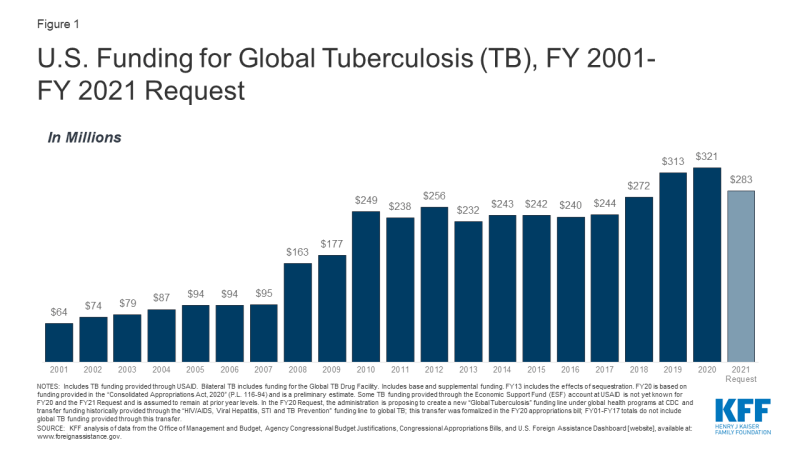 The U.S. is one of the largest donors to global TB control efforts and has highlighted TB as an important component of its global health investment. Looking ahead, there are several issues and challenges facing U.S. TB efforts, starting with questions about the extent to which the current Administration will continue to support ongoing efforts, particularly in light of its budget proposal to reduce TB funding. Additionally, as coronavirus continues to spread globally, there is growing concern over its impact on TB efforts, including the potential impact on TB services, as programs might be affected by coronavirus efforts, as well as the potential impact on people who have TB, as they may be more vulnerable to coronavirus. Other issues and challenges include: