Where Do We Stand in The Fight Against Ebola? A Conversation with CDC Director Tom Frieden 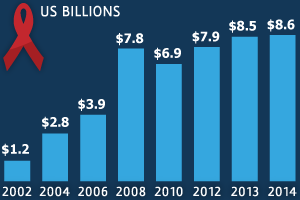 This annual report from the Kaiser Family Foundation and the Joint United Nations Programme on HIV/AIDS (UNAIDS) evaluates international efforts to finance the response to the AIDS epidemic. The analysis finds that although there was a slight increase in funding to respond to HIV in low- and middle-income countries in 2014, seven of 14 donor governments actually decreased funding, two remained flat and funding from five governments increased. Overall donor government funding for the AIDS response increased slightly, by less than 2 percent in 2014 to US$8.6 billion. After adjusting for inflation and exchange rates, the 2014 increase was 1%.