V. Poised at the Starting Line

Low- and Moderate-income Uninsured California Adults’ Readiness for the ACA

Low- and moderate-income adults in California are the main targets of the ACA expansions, but prior to the start of open enrollment, many remained unaware of their coverage options under the law. Further, while there were well-documented technical problems with initial enrollment efforts, some uninsured adults may face additional challenges in signing up for coverage, as they lack basic tools needed for this process such as internet access or bank accounts. Outreach and enrollment will be crucial to the ultimate success of the ACA in expanding coverage, yet many uninsured adults in California have limited connection to potential outreach avenues. Past experience demonstrates that both broad and targeted outreach efforts and direct one-on-one enrollment assistance will be key for successful enrollment.1

A majority of uninsured adults in California who are income eligible for coverage expansions reported knowing little or nothing about Medi-Cal and Covered California prior to the start of open enrollment.

Despite ongoing media attention to the ACA, most uninsured adults in California who are likely eligible for coverage under the law2 reported that they knew little about either Medi-Cal or Covered California prior to the start of open enrollment. More than three-quarters (76%) of uninsured adults in California with incomes in the Medi-Cal target range (≤138% of poverty) say they knew nothing at all or only a little about their state’s Medi-Cal program, and five out of six (84%) of uninsured California adults in the income range for Covered California subsidies (139-400% of poverty) reported that they knew nothing at all or only a little about Covered California (Appendix Table A6). While these shares are fairly constant across coverage categories, they point to the need for substantial outreach and education efforts among the target population for coverage expansions. Recent media attention to the challenges faced in initial enrollment efforts has likely increased awareness of coverage options; however, it is not clear to what extent media attention has translated to understanding of what is available and how to enroll, or discouraged attempts to enroll. More recent national polling data indicates that nearly half of the nonelderly uninsured of all incomes were not aware that the law provides help to low- and moderate-income Americans to help them purchase coverage, and two-thirds of nonelderly uninsured (all incomes) say they don’t have enough information to understand how the law will impact their families, a share that has been fairly consistent since Fall 2013.3

While most uninsured adults in California have the necessary tools for enrolling in coverage, some will experience additional logistical issues in signing up.

Under the ACA, online applications through the California Healthcare Eligibility, Enrollment and Retention System (CalHEERS) portal are the primary mode for signing up for coverage in Covered California; in addition, California is required to accept online applications for Medi-Cal (in addition to paper, phone, and in-person applications), and many people who are eligible for Medi-Cal may first apply for coverage through the Covered California web site. Thus, internet access is an important tool in accessing coverage under the law. While the majority of uninsured adults in California have access to the internet either at or outside the home (Figure 26), 27% of low-income (≤138% FPL) and 13% of moderate income (139-400% FPL) uninsured adults in California reported that they do not have internet access readily available. Further, some people who reported having internet access may be using their mobile devices for access, but currently Covered California is not configured to allow for application via mobile device. Californians without internet access may be able to enroll through other more traditional avenues, such as county offices or providers, but efforts may be needed to inform people about these other application routes, and some using them may experience a slower enrollment process than if they applied online. 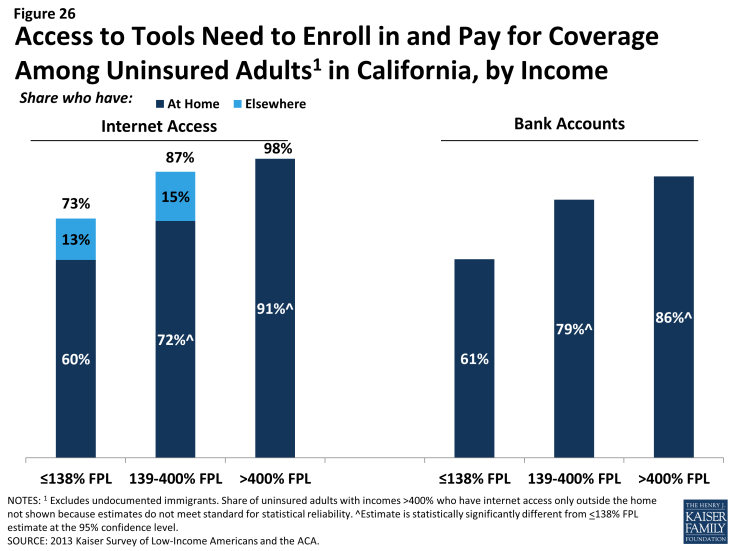 Figure 26: Access to Tools Need to Enroll in and Pay for Coverage Among Uninsured Adults in California, by Income

Many uninsured adults in California could be reached through targeted outreach avenues.

Across the state, a variety of outreach and enrollment efforts are underway to help connect eligible people to coverage, ranging from broad marketing and media campaigns to direct one-on-one assistance. Moreover, a wide array of groups and individuals are involved in outreach and enrollment, including community-based organizations, providers, health centers, and faith-based groups.5 As mentioned earlier, many groups will require targeted outreach to be informed of new coverage options under the ACA.

States are also utilizing new “fast track enrollment” opportunities to efficiently enroll large numbers of eligible individuals in their Medicaid programs.6 Specifically, CMS offered states the opportunity to facilitate enrollment of eligible people into Medicaid by using data already available to states through the Supplemental Nutritional Assistance Program (known in California as CalFresh) and children’s eligibility data for Medicaid (Medi-Cal) and the Children’s Health Insurance Program (in California, formerly Healthy Families, now Medi-Cal). Experiences in states that have already launched these strategies indicate they can be highly successful in connecting people to coverage, reaching a significant share of adults eligible for the Medicaid expansion while minimizing burdens for both individuals and eligibility staff.7

California recently received approval for these fast track enrollment strategies, which will allow the state to utilize data from CalFresh and its children’s eligibility data from Medi-Cal to facilitate enrollment of eligible individuals.8 Survey findings indicate these efforts are a promising avenue for outreach in the state. Among uninsured adults in California with incomes in the range for Medi-Cal eligibility (≤138% FPL), half reported that they or someone in their immediate family receives CalFresh, cash assistance, disability payments, or Medi-Cal, or Healthy Families (Figure 27). After Medi-Cal or Healthy Families (32%), CalFresh is the most common connection to social services programs among the low-income uninsured (25%). These programs already have much of the information needed to determine eligibility for Medi-Cal under the ACA, such as income, residence, and family structure, and could provide an efficient route to enrolling the uninsured in coverage. While lower shares of moderate-income uninsured adults in California reported a connection to a social service program, outreach to this group of uninsured adults could also reach many eligible for coverage. Successful outreach and “inreach” strategies involving service providers and advocacy groups during LIHP enrollment may be useful for reaching individuals for and Medi-Cal enrollment.9 However, prior barriers to Medi-Cal and LIHP enrollment efforts, including language and cultural barriers, immigration status, and misconceptions about the programs, may continue to be challenges during the current and future enrollment efforts. 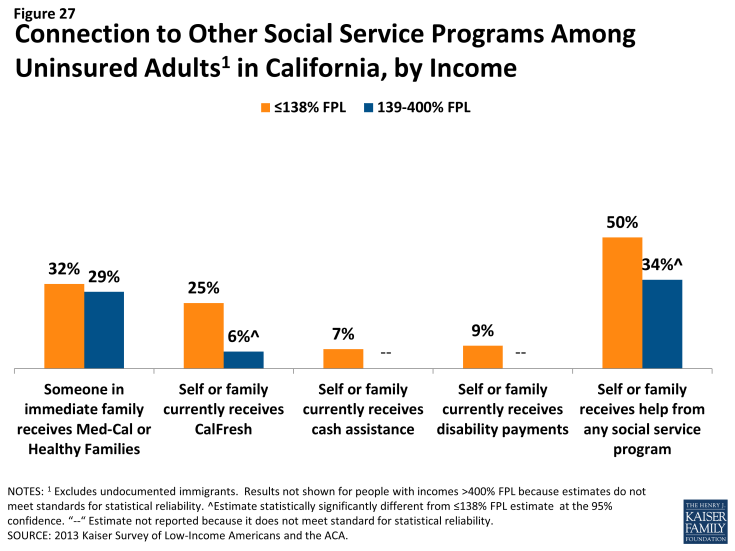 Figure 27: Connection to Other Social Service Programs Among Uninsured Adults in California, by Income

For those without a connection to social services agencies, outreach through providers may be an important approach. Many community health centers or hospitals and health systems are very involved with outreach and enrollment efforts, sometimes having enrollment workers in-house to help patients with ACA enrollment. California clinics are a promising outreach location, as one in four low- or moderate-income uninsured adults reported that they use a clinic or health center as their usual source of care (Figure 28). California health care centers are already acting on these opportunities: in May 2013, 125 health centers in California received $25 million in federal funding to help with ACA enrollment,10 and clinics and health centers are taking an active role in “inreach” to their patient populations.11 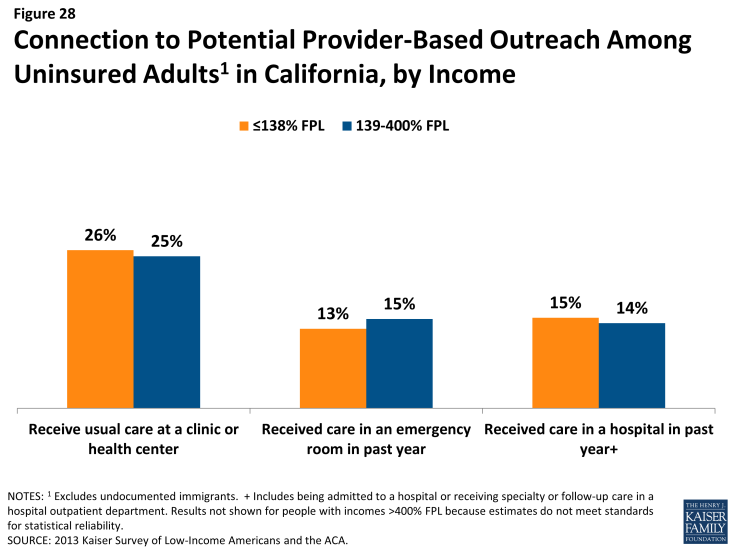 Figure 28: Connection to Potential Provider-Based Outreach Among Uninsured Adults in California, by Income

Hospitals are another effective place to reach uninsured individuals, since at least one in seven low- or moderate-income adults in California reported visiting a hospital in the past year for either emergency services or for inpatient or outpatient care. Under the ACA, hospitals are permitted to immediately enroll uninsured individuals (via a simplified online application) temporarily into Medicaid during their hospital stay, if they are presumed to be eligible for the program.12 California developed a Hospital Presumptive Eligibility program to reach out to people through emergency rooms, and the program went into effect on January 1, 2014.13 The Department of Health Care Services has made forms and resources for interested and participating providers available on their website,14 and the federal government has released additional information to assist with the implementation of presumptive eligibility.15 Patients who seek episodic care in emergency rooms or hospitals may be receptive to outreach efforts, as they have a demonstrated need for services and are likely to face high bills if they remain uninsured; however, outreach workers may be challenged to engage individuals in the application process at a time when they are seeking services for an urgent or acute problem.16 Additionally, undocumented immigrants, who also may seek episodic care in hospitals, are eligible for emergency, but not full scope Medi-Cal services, including pregnancy-related care.17 While outreach to undocumented individuals via hospital programs may cover the cost of their emergency visit, these individuals will still be left without an ongoing source of coverage.