Health insurance coverage is dynamic, and every year thousands of Californians gain, lose, or change their health coverage. However, for most uninsured adults in California, lack of coverage is a long-term issue that spans many years. Many uninsured adults in California reported trying to obtain coverage in the past but were unsuccessful due to barriers such as ineligibility for public coverage or high costs of private coverage. Under the ACA, millions of uninsured are projected to gain coverage as those barriers are removed, but some may continue to experience gaps or changes in coverage.

For most currently uninsured adults in California, lack of coverage is a long-term issue. 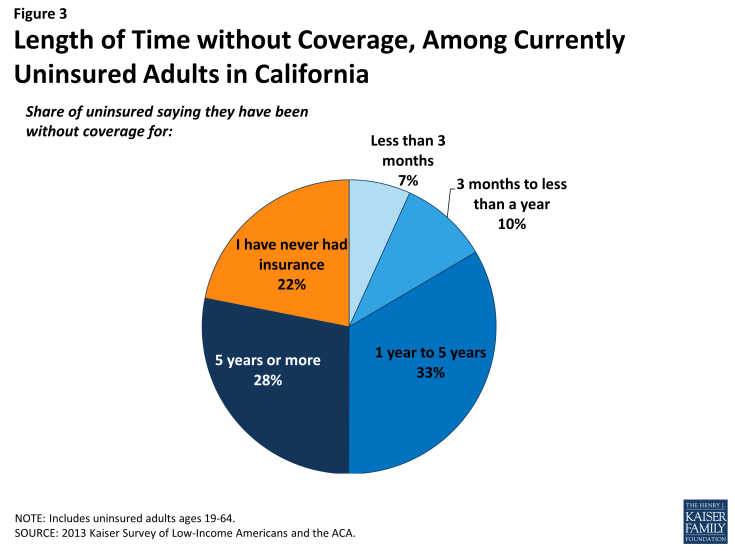 Figure 3: Length of Time without Coverage, Among Currently Uninsured Adults in California

It is important for policymakers in California implementing coverage expansions to be aware that people targeted by the ACA have varying levels of experience with the insurance system. While some previously had coverage, a large share of uninsured adults in California has been outside the insurance system for quite some time. The long-term uninsured may require targeted outreach and education efforts to link them to the health care system and help them navigate their new health insurance. As enrollment has lagged among the Hispanic population in California, it is particularly important to ensure that translation issues or lack of clarity on use of immigration information does not impede outreach and education efforts.1 Special efforts in the state to target the Hispanic population, as well as others who have been outside the health coverage system, are therefore particularly important.

Many uninsured adults in California report trying to obtain insurance coverage in the past, but most did not have access to affordable coverage.

Similarly, low-income adults had limited access to coverage through Medi-Cal prior to the ACA. While the state had expanded eligibility to children through Medi-Cal and Healthy Families (California’s former Children’s Health Insurance Program, which has now been consolidated into Medi-Cal), Medi-Cal eligibility for adults remained very limited (see Background for more detail). Prior to the state’s early expansion efforts through the LIHP, Medi-Cal eligibility for parents was limited to those with incomes below poverty, and non-disabled adults without dependent children were ineligible regardless of their income.2 While eligibility for low-income adults began to be expanded through the creation of the LIHP in 2010, county participation in the program was phased in and the income level at which individuals were covered varied across counties. In addition, some individuals who were eligible for Medi-Cal remained uninsured because they were not aware that they were eligible for coverage or they faced application or enrollment barriers. While California had already adopted many enrollment simplifications for children prior to the ACA, the enrollment processes for adults remained more burdensome than those for children.3

The previous gaps in Medi-Cal eligibility for adults and difficulties with the enrollment process posed barriers for many low-income adults seeking coverage. Nearly one quarter of uninsured adults in California (24%) reported trying to sign up for Medi-Cal in the past five years (Figure 4 and Appendix Table A2). The majority of adults in California who tried to sign up for Medi-Cal were unsuccessful, and among those, most (12% of the uninsured) were unable to sign up because they were told they were ineligible (Figure 4). Notably, results are similar when looking at just uninsured Californian adults in the income range for Medi-Cal expansion under the ACA (≤138% FPL). While some of the individuals who were told they were ineligible for Medi-Cal may have been eligible for other programs, such as LIHP, most likely remained ineligible for public coverage until the ACA expansion in January 2014, barring a change in their income.4

Prior to the ACA, there were also barriers to obtaining coverage on the nongroup, or individual, market. This type of coverage was not guaranteed in California, and insurance companies could charge higher premiums for sicker or older individuals, making coverage unaffordable for many uninsured adults.5 Uninsured Californians also report trying to obtain nongroup coverage. One in six uninsured adults in California (17%) reported trying to obtain nongroup coverage in the past five years. Most of these Californians (10% of the uninsured) did not purchase a plan because the policy they were offered was too expensive (Figure 4). 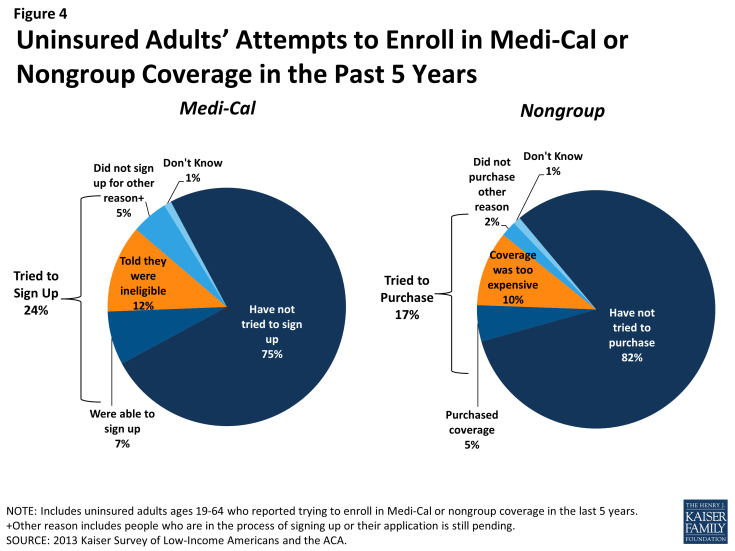 Figure 4: Uninsured Adults’ Attempts to Enroll in Medi-Cal or Nongroup Coverage in the Past 5 Years

Many of the barriers to coverage that the uninsured have reported facing in the past are addressed by the ACA. Large employers (>50 workers) face penalties if they do not offer affordable coverage to their workers,6 and in states that chose to expand Medicaid such as California, eligibility for Medicaid includes most adults with incomes at or below 138% FPL. Further, millions of uninsured families are now able to purchase coverage in the Marketplaces and receive premium tax credits to reduce the cost. Insurers are no longer able to deny coverage based on health status and are limited in what they charge people based on age, location, and tobacco use status. However, some uninsured adults may continue to face barriers to coverage. As was the case before the ACA, undocumented immigrants remain ineligible to enroll in Medicaid, and recent lawfully residing immigrants are subject to certain Medicaid eligibility restrictions. One in five uninsured adults in California is an undocumented immigrant7 and will not have access to coverage under the ACA.

For those who are eligible for assistance, education efforts regarding new coverage options are important. People who have attempted to obtain coverage in the past may be unaware that rules and costs have changed under the ACA. Outreach and education will be needed to inform people that eligibility rules have changed and that financial assistance is available to offset the cost of coverage.

Health coverage is not always stable.

Among California adults who were insured at the time of the survey, 5% reported being uninsured at some point in the past year (see Table 2), and those who had a gap in coverage were uninsured for nearly half the year (7.4 months) on average (data not shown). Further, some currently uninsured adults had coverage at some point within the past year. Among uninsured adults in California, nearly one in six (16%) reported having lost coverage within the last year. Among both those with a gap in coverage or who recently lost coverage, the majority reported that they most recently had employer coverage (data not shown).

In addition to those who lose or gain coverage over the course of a year, many adults in California who have coverage throughout the entire year have a change in their health insurance plan. Among adults with insurance coverage, 9% had coverage for the entire year but reported that they had a change in their coverage (Table 2). Coverage changes may be due to a number of different factors including changes in employment, changes in eligibility for public programs, or simply a change in plan or insurance carrier. The most common reasons for a change in coverage appear to be related to changes in employment or changes in plans during open enrollment, as most Californians with coverage change reported changing from an employer plan to another employer plan.

Last, a small number of insured adults in California reported challenges in either renewing or keeping their coverage, another indication of instability in coverage throughout the year. Reflecting eligibility rules, adults with Medi-Cal are the most likely to report a challenge (19%) compared to adults with other insurance types (Figure 5). Medi-Cal eligibility is closely tied to income, and adults’ income may fluctuate throughout the year; adults must report changes in income that may affect their eligibility throughout the year, and low-income people are very likely to have part-time or seasonal work that leads to income fluctuations over the course of a year. In addition, adults must renew their Medi-Cal coverage either in person or online at least annually. 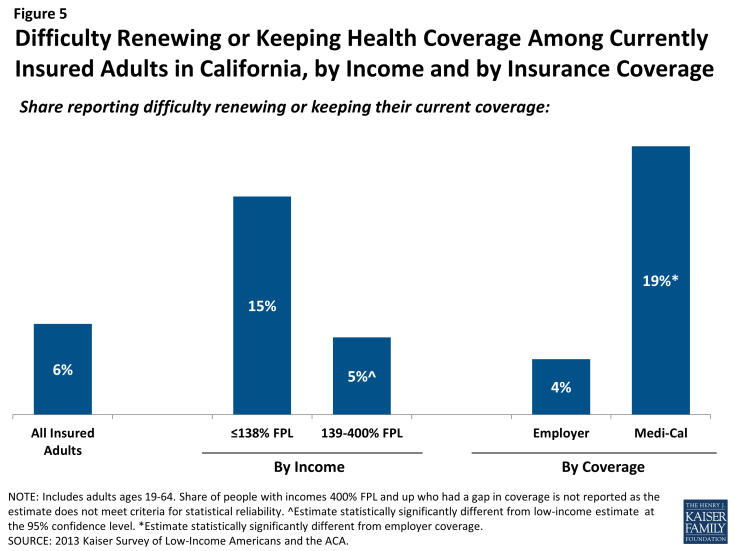 Figure 5: Difficulty Renewing or Keeping Health Coverage Among Currently Insured Adults in California, by Income and by Insurance Coverage

The survey findings on changes in insurance coverage during the year have implications for implementation of health reform in California. While there has been much focus on enrolling currently uninsured people into Medi-Cal or Covered California coverage, survey findings demonstrate that people will continue to move around within the insurance system throughout the year. Many people lose or gain employer coverage over the course of a year due to changing economic conditions and the delicate relationship between employment and health insurance. Further, there is some churning in insurance coverage resulting from Medi-Cal income eligibility limits: as adults’ income fluctuates, they may gain or lose Medi-Cal eligibility. Adults may also experience gaps in Medi-Cal coverage due to renewal requirements.

Gaps in coverage can cause people to postpone or forgo health care or accumulate medical bills,8 and changes in insurance plans may disrupt continuity of treatment. By providing for insurance options across the income spectrum and facilitating coverage outside the employment-based system, the ACA may help adults have coverage continuously throughout the year. Renewal simplifications for Medi-Cal coverage enacted as part of the ACA may also address issues in coverage disruptions: whereas previously all adults in California had to submit a paper form and documentation of income for Medi-Cal renewal, provisions under the ACA provide new options for them to renew on-line or by phone and use pre-populated forms when possible to reduce the need for paper documentation.9

However, even after implementation, adults are likely to experience coverage changes due to job changes or income fluctuation. To further help reduce churning on and off of Medicaid coverage, CMS has offered states the ability to adopt 12-month continuous eligibility for parents and other adults through Section 1115 Medicaid demonstration authority, and the federal government is finalizing policies regarding matching funds for this provision. Though many states use continuous eligibility for children in Medicaid, as of fall 2013, no state, including California, had adopted this strategy for adults. Other potential efforts to address churning in insurance coverage include plan coordination across Medi-Cal and Covered California—for example, requiring plans to provide for transition plans, engage in information sharing, or align provider networks—and having an ongoing presence of application assistants to help with coverage transitions.10 Because implementation is not a “one shot” effort that will be done once Californians are enrolled or transferred to Medi-Cal in the early part of 2014, it will be important to have ongoing efforts to enroll and keep people in coverage.

Background: The Challenge of Expanding Health Coverage in California II. What to Look for in Enrolling in New Coverage