The latest partnership survey from the Kaiser Family Foundation and The Washington Post examines the public’s views, awareness, and preferences related to climate change. Like surveys conducted by other organizations, our poll finds high levels of concern and support for policy solutions to address climate change. In this poll, we also probed the public’s willingness to accept the types of trade-offs that are inevitably associated with policy solutions, and find that there are limits to public support and engagement on this issue. The poll finds that eight in ten U.S. adults believe that human activity is causing changes to the world’s climate, and two-thirds think the U.S. government is doing too little to reduce greenhouse gas emissions. Yet while many see climate change as an urgent issue, most are not discussing it often with their family and friends, and most are not willing to make personal sacrifices such as paying higher taxes at the gas pump or on their electric bills. While majorities of Democrats, Republicans, and independents agree that human-caused climate change is happening, there are large divisions in how partisans view the urgency of the issue and potential solutions.

1 in 4 Americans donated money to charity or otherwise acted to express their climate change views. 1 in 4 teens took part in a climate-change protest, rally or school walkout, or otherwise engaged on the issue. More in new @KFF/@WashingtonPost poll

The survey also included a sample of U.S. teens ages 13-17, and finds that most teens view climate change as an important issue. However, rather than standing out as a singularly important issue for teens, it is one of many issues they view as important. About one quarter of teens report engaging politically on the issue of climate change (by participating in a protest or school walk-out, or contacting a government official), but teens are less likely than adults to say they regularly discuss the topic with friends.

This survey is the 34th in a series of surveys dating back to 1995 that have been conducted as a part of The Washington Post/Kaiser Family Foundation Survey Project.

Majorities of U.S. adults across parties believe human-caused climate change is happening, but Republicans are much more doubtful about the seriousness of the problem. Large majorities of Democrats (90%) and independents (82%) and a solid majority of Republicans (60%) agree that human activity is causing changes to the world’s climate, including an increase in average temperature. However, Democrats and independents are much more likely to be firm in their beliefs: 59% of Democrats and 43% of independents say they are very certain that human activity is causing climate change, compared to one in five Republicans. Moreover, a majority (56%) of Republicans say that when it comes to what is said in the news, the seriousness of global warming and climate change is generally exaggerated, while most Democrats say the seriousness of the problem is generally correct (48%) or generally underestimated (46%). 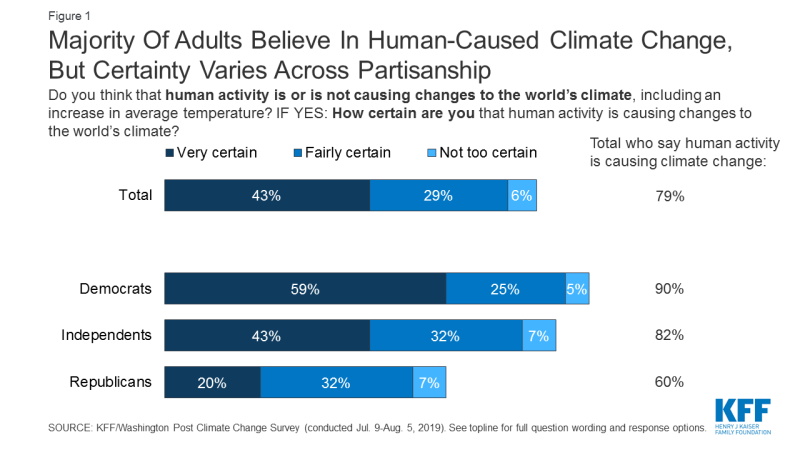 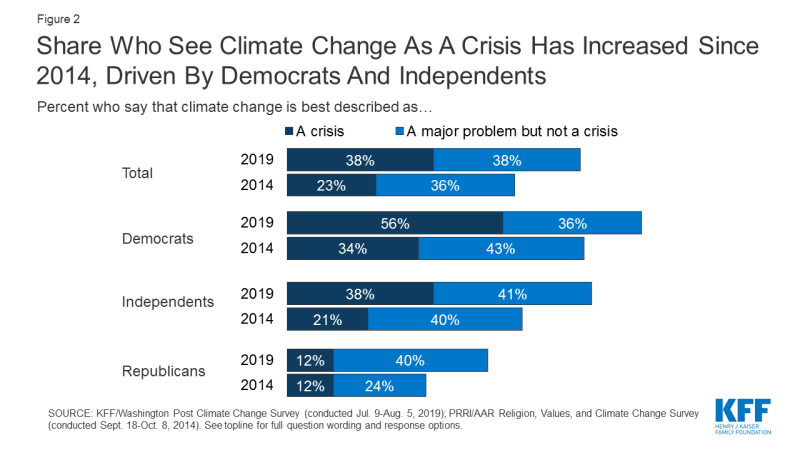 Figure 2: Share Who See Climate Change As A Crisis Has Increased Since 2014, Driven By Democrats And Independents 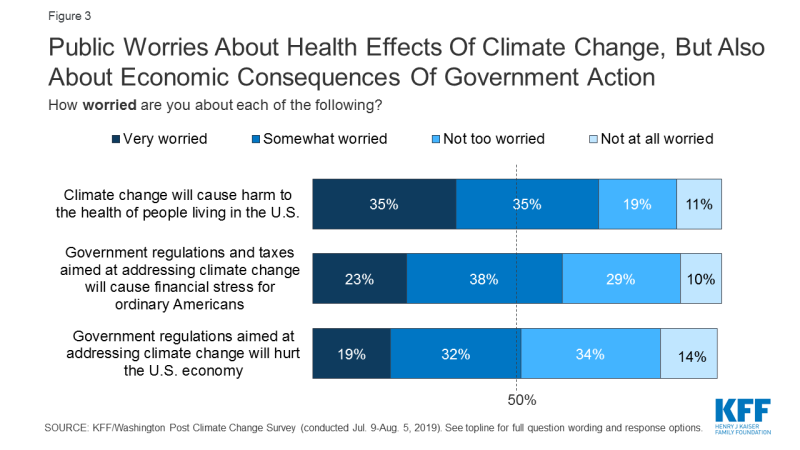 Climate change is not a frequent subject of dinner table conversations for most Americans, and few adults report any political engagement on the issue. About half of adults say they rarely or never discuss climate change with their family members (53%) or friends (54%), and just about one in ten say they often discuss the topic with either group (12% and 10%, respectively). Small shares say they have donated money to a charity working to address climate change (17%), contacted a government official (12%), or participated in a protest, rally, or other event (9%) to express their views on climate change. 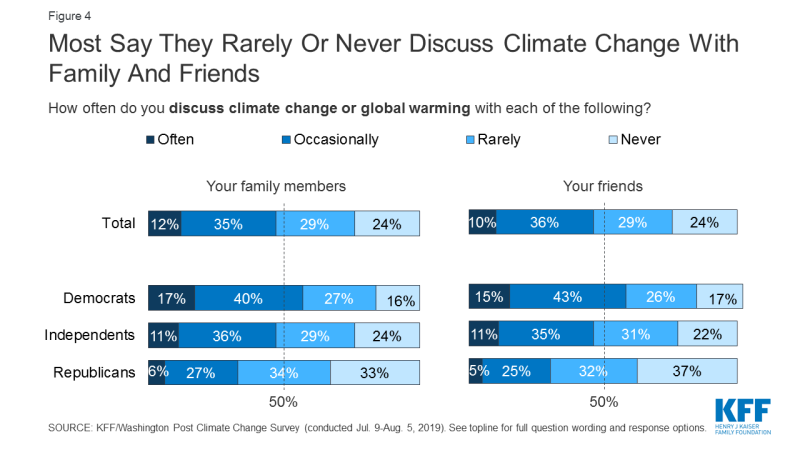 Figure 4: Most Say They Rarely Or Never Discuss Climate Change With Family And Friends

Few U.S. adults are willing to make personal sacrifices in the form of higher gas or electricity taxes in order to address climate change. Fewer than four in ten adults (37%) think that reducing the negative effects of global warming and climate change will require major sacrifices from ordinary Americans, while a plurality (48%) think it will require minor sacrifices and 14% say it won’t require much sacrifice at all. Majorities are willing to support raising taxes on wealthy households (68%) and on companies that burn fossil fuels, even if it may lead to increased electricity and transportation prices (60%), as ways to pay for policies aimed at reducing U.S. greenhouse gas emissions. But when it comes to taxes that are likely to hit consumers’ pocketbooks, support is much lower. About half (51%) oppose a $2 monthly tax on U.S. residential electric bills, and seven in ten (71%) are opposed to such a tax at the $10 a month level. Similarly, majorities oppose increasing the federal gasoline tax by 10 cents or 25 cents per gallon (64% and 74%, respectively). There are partisan divisions, but even majorities of Democrats oppose a $10 monthly electricity tax (60%) and a 25-cent per gallon gasoline tax (63%). 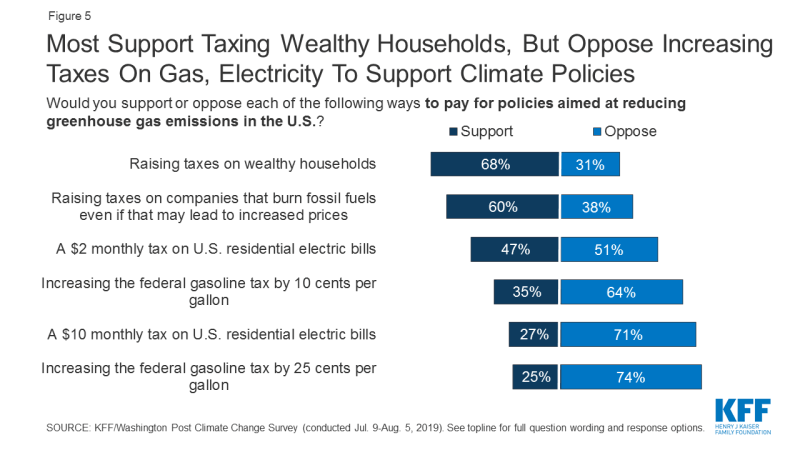 Democrats have an edge over Republicans when it comes to the issue of climate change, though majorities say both parties are doing too little. Democrats have a 21-percentage point advantage over Republicans in trust to handle climate change (38% vs. 17%), though a substantial 35% of the public say they trust neither party. Notably, majorities say that President Trump (66%), the Republican Party (69%), and the Democratic Party (56%) are doing too little to reduce greenhouse gas emissions. Two-thirds (67%) disapprove of President Trump’s handling of climate change (his lowest rating out of six issues tested), and a similar share (66%) disapprove of his plan to roll back fuel efficiency standards put in place by the Obama administration. 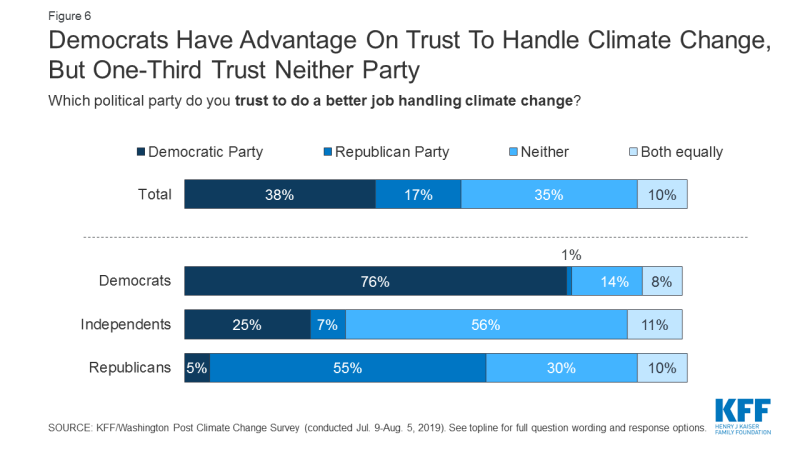 Figure 6: Democrats Have Advantage On Trust To Handle Climate Change, But One-Third Trust Neither Party

While most U.S. teens see climate change as an important issue, it does not stand out as a singular defining issue for their generation. Like adults, a large majority of teens (86%) believe that human-caused climate change is happening, though just under half (46%) are very certain. Six in ten teenagers (61%) say the issue of climate change is very or extremely important to them personally, making it one of many issues that teens view as important. Notably, about a third of teens (34%) say climate change is an extremely important issue, but rather than standing out as the top issue for teens, climate change ranks similarly to health care (38%), gun policy (35%), and the economy (32%). Teens (39%) and young adults ages 18-29 (43%) are about 10 percentage points more likely than adults ages 30 and older to say climate change will cause a great deal of harm to people in their generation. But like adults, teens are more likely to see climate change as a problem affecting future generations rather than their own (63% of teens and 60% of adults say future generations will be harmed a great deal). 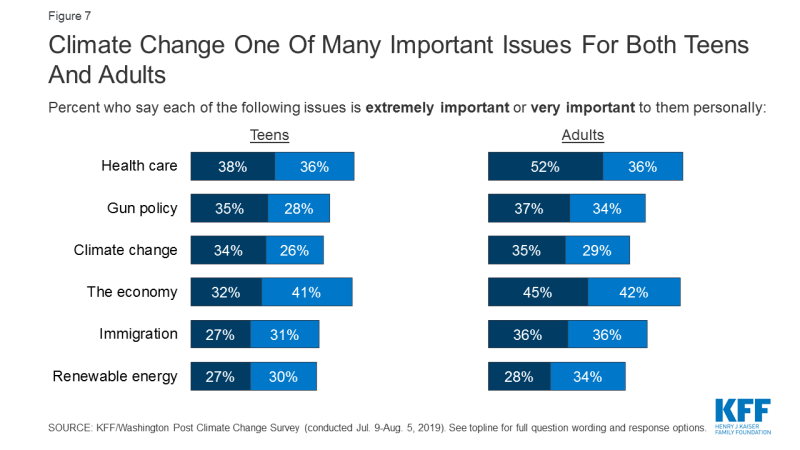 Figure 7: Climate Change One Of Many Important Issues For Both Teens And Adults

The issue of climate change evokes a variety of emotions for teens, though young adults are even more likely than teens to say they feel afraid, motivated, helpless, and guilty. Majorities of teens say the issue of climate change makes them feel “afraid” (57%), “motivated” (54%), and “angry” (52%). About four in ten (43%) say they feel “helpless” (vs. 53% of adults), while a smaller share (29%) say they feel “optimistic.” Young adults ages 18-29 are the age group most likely to express a variety of emotions when it comes to climate change, including “afraid” (68%), “motivated” (66%), “helpless” (66%), and “guilty” (54%). Like adults, most teens say they rarely or never discuss climate change with their family. Moreover, teens are 8 percentage points less likely than adults to say they at least occasionally discuss the issue with friends (38% vs. 46%). 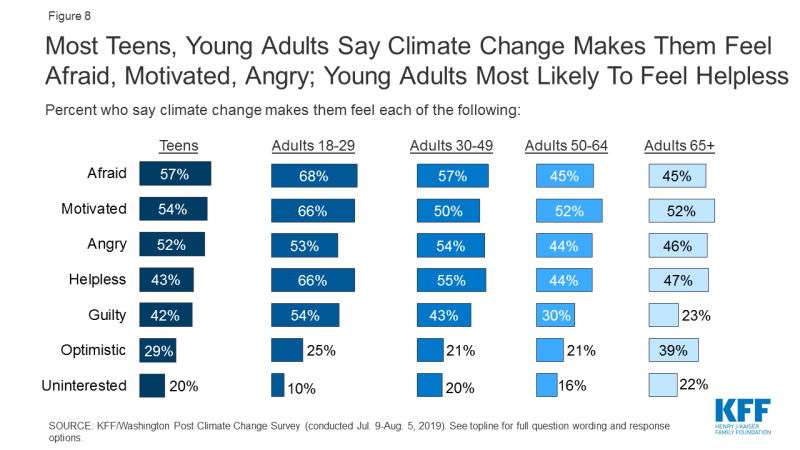 Most teens feel they can make a difference when it comes to climate change, and about a quarter report engaging politically on the issue. Almost two-thirds of teens who believe in human-caused climate change (55% of all teens) say they feel that there are things they can do personally to make a difference when it comes to reducing the effects of climate change. About four in ten teens (41%) say they have taken action to reduce their own carbon footprint. In addition, about one-quarter report engaging in some type of political action in the past 3 years to express their views on climate change; this includes 15% who say they’ve participated in a school walk-out, 13% who have participated in a protest or rally, and 12% who have contacted a government official. Some groups of teens are more likely than others to report engaging in political action around climate change, including those who are Black (33%) or Hispanic (30%), older teens ages 16-17 (31%), and those who identify as Democrats or lean Democratic (30%). 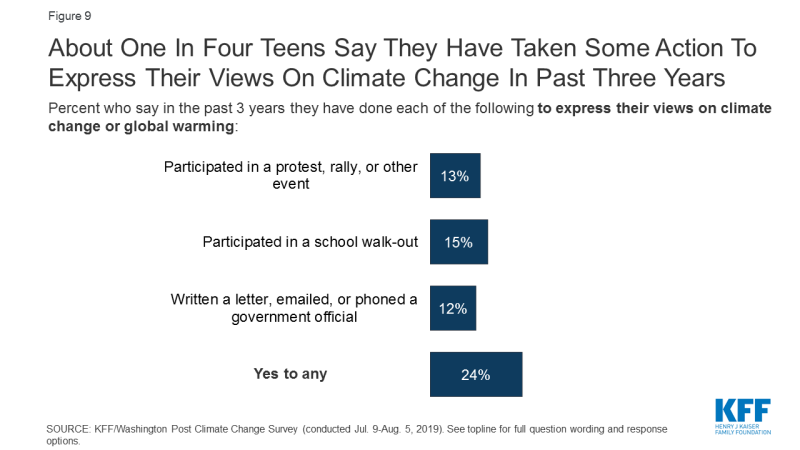 Figure 9: About One In Four Teens Say They Have Taken Some Action To Express Their Views On Climate Change In Past Three Years 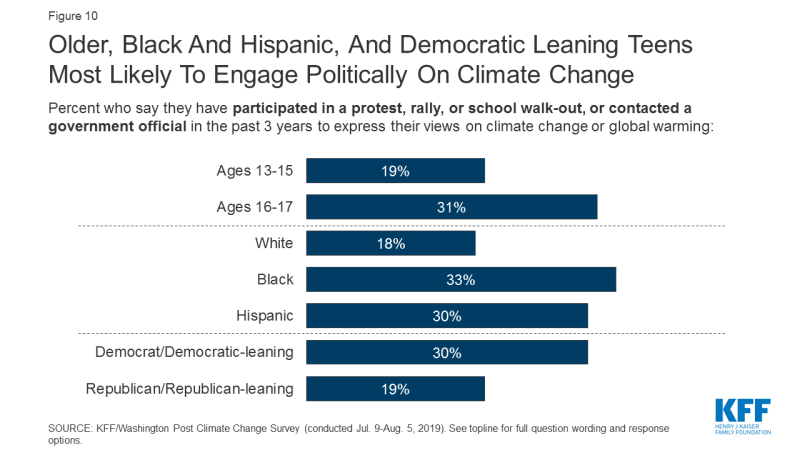 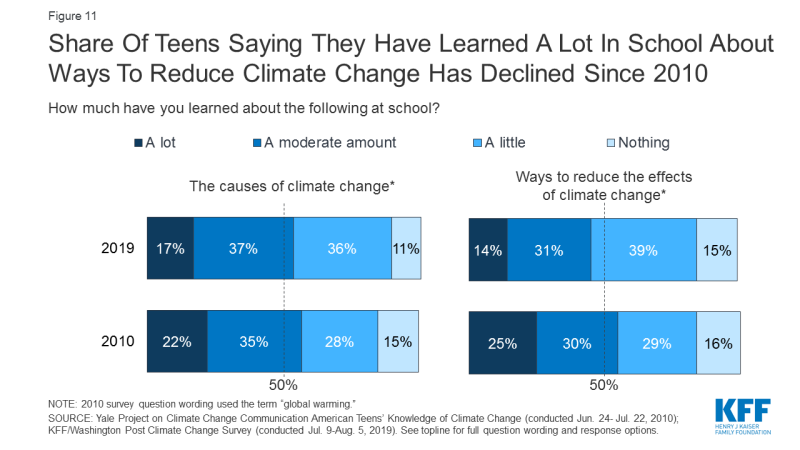 Figure 11: Share Of Teens Saying They Have Learned A Lot In School About Ways To Reduce Climate Change Has Declined Since 2010