Figures 7 shows examples of the tax reductions for self-employed households enrolled in the second lowest-cost plan in San Francisco. The scenarios are the same as those assumed under Figure 4, except that the families deduct the full amount of their health insurance premium.4 The reduction amounts shown are calculated by computing each family’s taxes with and without a deduction for health insurance. The example households below $100,000 benefit from both the premium tax credit and the self-employed health insurance deduction. Similar to the dynamics for individuals in the non-group market, the tax deduction is regressive as it rewards wealthier families more; and the premium tax credit is progressive as it provides a higher subsidy for lower income households. The example households at or above $100,000 earn more than 400% of the federal poverty line and therefore pay the full premium cost ($11,563). Self-employed households at all income levels receive a higher tax subsidy than households with wage income, reflecting the fact that those that are self-employed can deduct the full amount of health insurance premiums, while people taking the medical expense deduction can only deduct expenses exceeding 10% of their adjusted gross income. Another interesting component of the tax burden faced by self-employed households is that they are unable to deduct health insurance spending from their self-employed tax liability. Because workers who receive an employer sponsored plan are not assessed FICA taxes on the value of their plan, employed-workers pay a smaller tax burden than similarly situated self-employed workers. 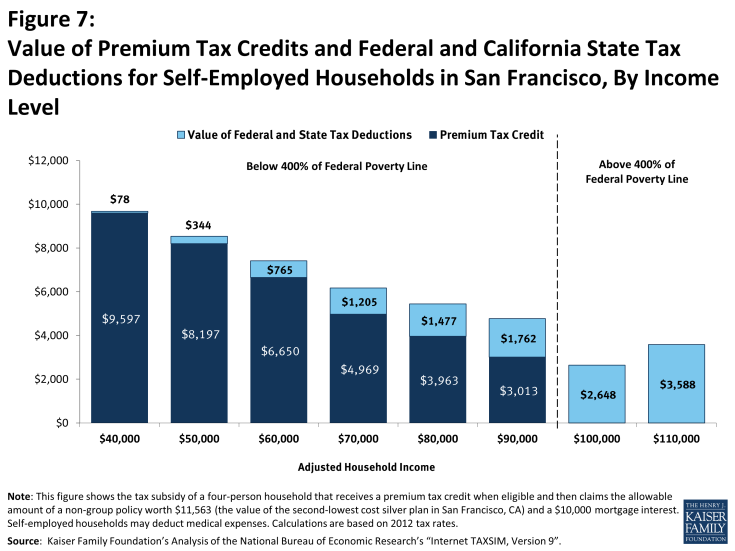