I. Federal and State Tax Exclusions for ESI

Federal and state tax laws do not include the value of employer contributions for health insurance (or health benefits when paid directly by employers) in the income of employees. Employees often also can make their contributions towards the premium for ESI with income before it is taxed. This lowers the amount employees owe in income taxes, and lowers payroll taxes paid for Medicare and Social Security (collectively known as FICA, or the Federal Insurance Contributions Act taxes).1 The exclusions of employer and employee contributions from income and payroll taxes are the largest tax subsidy for private health insurance. We follow with some examples to show how the exclusions work and show how it ranges in value for families in different circumstances.

This first example looks solely at employer contributions for health insurance. For simplicity, it looks only at federal income and payroll taxes and is illustrated in Table 1. Person A works at a job and is paid wages of $60,000. Person A’s employer does not provide health insurance. Person B works at a job and in addition to being paid $50,000 in wages, receives a $10,000 contribution to an employer-sponsored health plan. In this example, the value of Person B’s health insurance policy is $12,500. So, the employer pays $10,000 and Person B pays the remaining $2,500 from his/her wages.

Both Person A and Person B receive $60,000 total in compensation, but they owe different amounts in taxes. Since Person B receives $10,000 of his/her compensation as contributions towards a health insurance premium, which is excluded from a person’s taxable income, he/she pays $3,030 less in taxes. Person A would pay income tax and FICA based on a $60,000 salary (a total of $9,180 in FICA and $4,065 in income tax).2 In contrast, Person B would pay taxes on $50,000, meaning they would be responsible for $1,500 less in federal income tax and $1,530 less in employer and employee FICA assessments. The total reduction in tax burden ($3,030) is equal to about 30% of the employer premium contribution ($10,000). Note here that while the employer actually pays one-half of the FICA taxes, it is generally accepted that the incidence of the whole tax falls on the employee because it is a nondiscretionary cost that is tied directly to earnings. We therefore treat the extension as benefiting the employee rather than the employer.

In the example above, Person B paid for his/her share of the total health insurance premium from his/her take-home pay. Section 125 of the Internal Revenue Code permits employers to sponsor arrangements that allow employees to pay for their share of insurance premiums with funds deducted from their wages before they are taxed.3 Section 125 plans can be used by employees for a wide variety of benefits including medical expenses, as well as, ancillary benefits like life insurance or vision coverage. Since their inception in 1978, Section 125 plans have become quite common; in 2012, 41% of small firms (3 to 199 workers) and 91% of larger firms offered such an arrangement.4 Section 125 plans allow covered employees to further reduce their tax liability. Table 2 compares the tax liabilities of two employees receiving $10,000 in employer contributions towards a health insurance policy – one whose employer does not offer a Section 125 plan (Person B1) and one whose employer does (Person B2).

Since Person B2 is able to pay the $2,500 employee premium share through a Section 125 plan, Person B2’s taxable wages falls from $50,000 to $47,500. This translates to federal income tax liability falling by $375, and employer and employee federal payroll taxes each falling by $191, for a combined tax reduction in federal taxes of $758.5 This tax reduction is approximately 30% of the employee’s share of the premium contribution. A worker in a state with an income tax would see additional savings.6

Impact of Exclusion for Employer and Employee Premium Contributions by Income

The previous examples demonstrate that the exclusion of employer-sponsored health insurance premiums reduces tax liability. In this section, we illustrate the following two reasons why these tax reductions vary by household income, namely:

Under the federal income tax system, the percentage of income that is taxed increases for each portion of income that exceeds predefined thresholds. Table 3 shows the federal income tax rates for married families filing jointly in 2012. Under the schedule, a family with $75,000 of taxable income7 would pay a tax equal to 10% of the first $17,400 of income (or $1,740), 15% of their next $53,300 of income (or $7,995) and 25% of the last $4,300 of income (or $1,075), for a total tax payment of $10,810. What this means for the tax exclusion for premium payments is that the value of the exclusion grows as income increases. For example, a family with $75,000 of taxable income would save $0.25 in federal income tax for each dollar reduction in their taxable income, but a family with $50,000 in taxable income would save only $0.15 in federal taxes for each dollar reduction in taxable income. The percentage rate at which the last dollar of family income is taxed is referred to as the family’s marginal tax rate.   In addition to federal tax, many states have progressive income schedules.

The other major reason that the tax reduction varies by income is that there is an annual cap on the portion of federal payroll tax payments that support the Social Security program (which, in combination with tax payments to support Medicare, is known as the FICA tax). Under the Social Security portion of the payroll tax, both employees and employers pay 6.2% of wages (for a total of 12.4%) to support the program. However, the 12.4% employee-employer assessment to support Social Security is capped; the assessment is only collected on wages up to an annual per employee earnings limit. The limit in 2012 was $110,100 per worker.8 Therefore, an employer with wages of $150,000 in 2012 would pay 6.2% towards FICA only on $110,100 of the employees’ wages.9 The annual cap means that for workers with wages lower than the annual limit, the exclusion of employer and employee premium payments from the Social Security portion of FICA results in a tax reduction of $0.124 for each dollar excluded. Workers with wages above the annual limit, however, have already stopped paying the Social Security portion of FICA for wages earned beyond the annual limit, so additional income shielded by the tax exclusion would not be subject to the 12.4% anyways. It is important to note that FICA is assessed based upon a workers income and not on a households combined income.

Whereas the progressive tax rates mean that wealthier households receive a higher-valued reduction in their tax bill, the Social Security limit works the other way providing relief only to households with incomes less than the $110,100 limit.

The amount of tax reduced by the health insurance tax exclusion varies with family income. (See Appendix A for a description of how tax reduction is calculated.) For the following examples we assumed the characteristics below of a family, relating to their tax liability:

Figure 1 shows the difference in tax reductions for households whose compensation includes ESI versus households without ESI coverage. For this figure, we look at sample families with annual wages at $60,000, $80,000, $100,000, and $150,000.11 Each bar in the figure represents the difference in the tax burden of a household with an employer plan subtracted by the tax liability of a family without coverage. For example, a household with a wage income of $60,000 that receives employer healthcare coverage pays $4,054 less in total taxes than a household whose compensation does not include coverage. The income tax reductions and the total tax reduction grow steadily with income, reflecting the progressive income taxes at the federal and state level. The FICA reduction is the same in each case, reflecting how the tax is the same percentage for each of the example households, despite the variation in income levels. In these examples, while family income exceeded the threshold for Social Security taxes for the highest family income categories, since we assumed the family has two wage earners making equal amounts, no individual worker’s salary exceeded the annual cap. The total tax reduction varies from over $4,000 at the lower end of the income range presented to over $6,000 at the higher end, or between 32% and 50% of the total premium value. 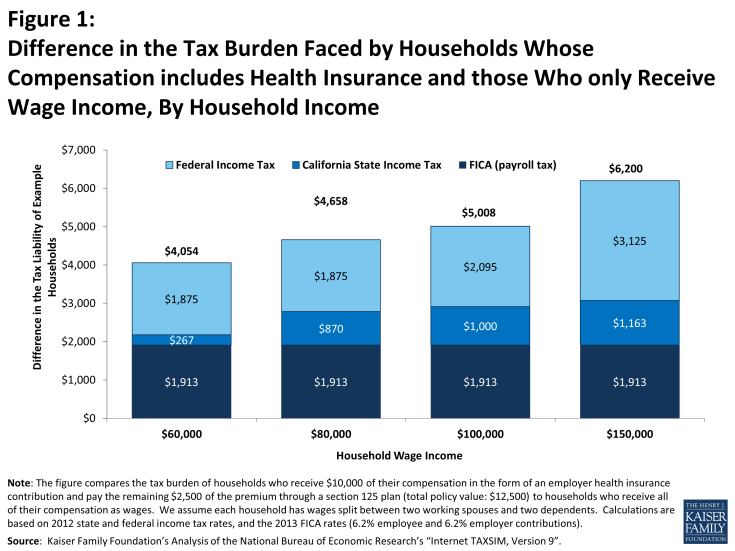 Figure 1: Difference in the Tax Burden Faced by Households Whose Compensation includes Health Insurance and those Who only Receive Wage Income, By Household Income

Figure 2 demonstrates the impact of the annual Social Security earnings limit for FICA tax liability. Two families both earning $150,000 in wages and receiving a $12,500 health insurance policy through an employer face different tax burdens. As in the previous example, the employer makes a $10,000 contribution and the employee contributes $2,500 through a Section 125 plan. The two workers family has two earners both under the annual Social Security earnings limit ($110,100 in 2012). On the other hand, the single worker family stops paying the Social Security portion of FICA once his or her wages reaches the limit,12 so the tax exclusion for health insurance does not reduce the FICA contribution that that worker makes for the Social Security portion of FICA. The worker in the two earner family is taxed for the full FICA assessment for each additional dollar of earnings. The tax exclusion for the one earner family is over $3,000 larger than the exclusion for two earner family because of the cap for the Social Security portion even though their total earnings ($150,000) exceeds the cap. 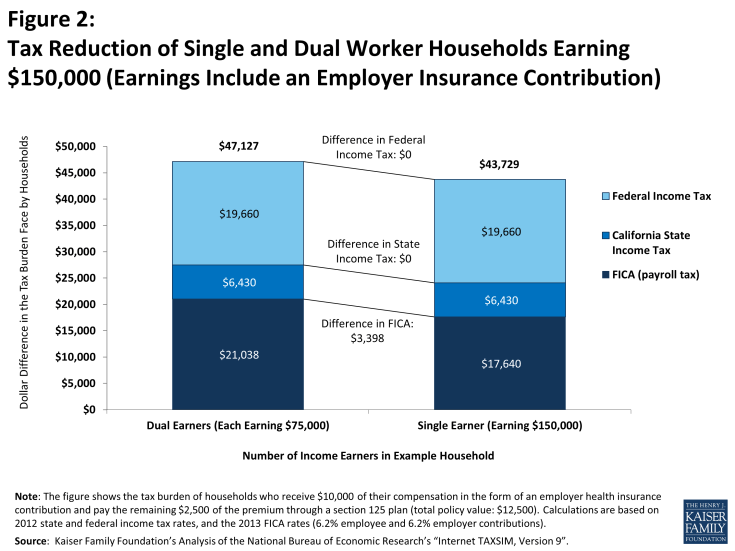 These examples show that the federal tax exclusion for employer-sponsored health insurance results in substantial levels of tax reduction for families at different earnings levels and that the total tax reduction increases with family earnings. The primary reason that the tax reduction increases with family earnings is due to progressive income tax rates – the marginal tax rate for each dollar of income tends to be higher as income grows (until family income reaches the top federal and state income tax rates).

Of course, actual families have much more complicated earnings and income situations than shown here. For example, some families will have itemized deductions which will lower their taxable income and may lower their marginal tax rate, effectively lowering the amount of tax reduced by the exclusion. Conversely, families may have other types of income, such as interest income, that would increase their total taxable income, potentially raising their marginal tax rate and the amount of tax reduced by the exclusion. The situation can be even more complex for lower-income families, because employer contributions for ESI are not considered as income when considering eligibility for programs such as the earned income tax credit (EITC) or the child care tax credit. While there are many potential scenarios that could be provided with differing family circumstances and differing tax reduction impacts, the important point is that, because health insurance is costly, the decision not to tax employer and employee premium payments often has a significant impact on family tax liability. Given that higher-income households are more likely to be offered coverage and more likely to receive a larger employer contribution, the effects of the tax subsidy are more dispersed by income when examining the country as a whole. The tax preference for employer coverage may in part explain why health insurance continues to be an important recruiting tool for employers, and some employees continue to expect coverage from their employer.