Racial discrimination and unfair treatment is a reality reported by considerable shares of Black and Hispanic Americans. A third of Blacks (35 percent) and about a quarter of Hispanics (26 percent) say they have experienced certain types of racial discrimination, such as being denied a job or housing, or being prevented from voting, compared to about 1 in 10 (11 percent) Whites. In addition, more than 4 in 10 Blacks (45 percent) say they have at some point been afraid their life was in danger because of their racial or ethnic background, compared to 27 percent of Whites and 20 percent of Hispanics. 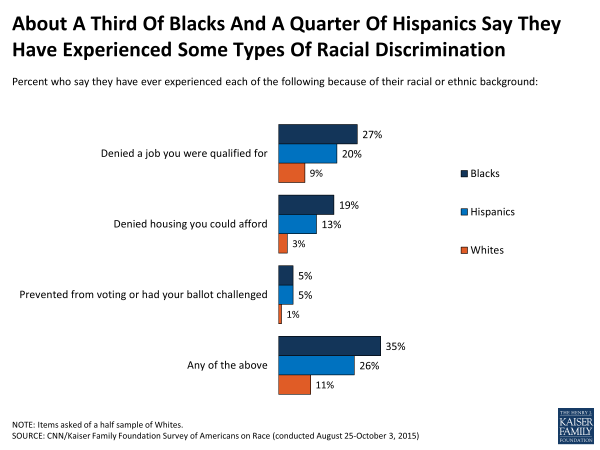 Not only do many Black and Hispanic people in America say they’ve faced discrimination at some point in their lives, many report experiencing bias and unfair treatment on a more regular basis. Strikingly, more than half of Blacks (53 percent) report that they have experienced unfair treatment in the past 30 days because of their race at places such as their work, in stores, at restaurants, while getting health care, or in dealings with police. Over a third of Hispanics (36 percent) report having these experiences recently, compared to 15 percent of Whites. Within each racial group, there are few differences by income, with the exception that lower income Hispanics (household earnings of less than $50,000 per year) are much more likely to say they have experienced unfair treatment recently than their higher income counterparts (42 percent versus 27 percent). 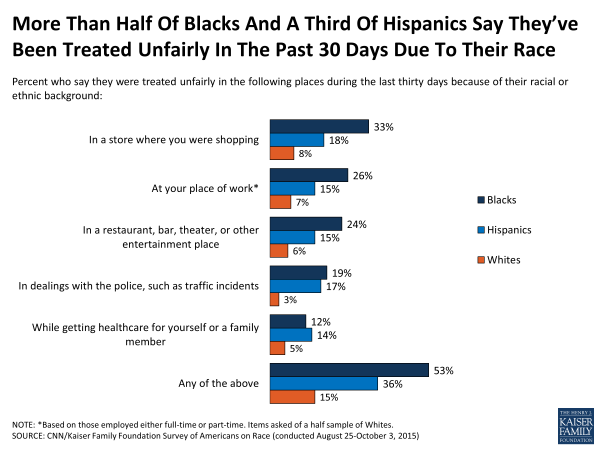 Among Blacks, there are some significant differences by age in reports of some types of discrimination or recent unfair treatment. Two-thirds of Blacks ages 18-34 (67 percent) and half of Blacks ages 35-64 (50 percent) say they have experienced any unfair treatment because of their race in the past 30 days, much higher than the quarter (26 percent) of Black seniors who say the same. In addition, roughly half of Blacks under 65 years old say they have felt their life was in danger because of their race, compared to about a quarter of those 65 or older. However, across generations, similar shares of Blacks report being discriminated against in terms of housing, employment, or at the ballot box.

In addition to the stark differences in personal experiences related to race, there is still segregation and lack of diversity among certain social and residential communities. Although in part a function of being a demographic majority, Whites are more isolated from people of other races, while Blacks and Hispanics are members of more diverse communities. Nearly four in 10 Whites (37 percent) say the people in their neighborhood or the people they socialize with are mostly of a different race; nearly half the share of Hispanics (72 percent) and Blacks (70 percent) who say they live near or socialize mostly with those of other races. Higher income Blacks and lower income Whites are more likely than their counterparts to say they are living in or socializing with more diverse communities. 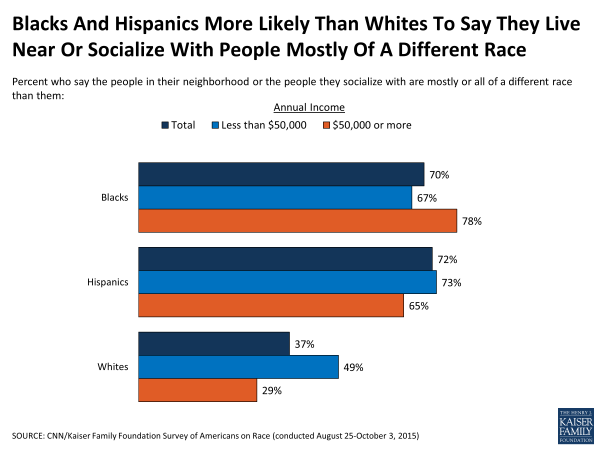 Although roughly 7 in 10 Blacks and Hispanics say both the news and entertainment media portrays people of their racial or ethnic background accurately at least some of the time, both groups are more likely than Whites to say they are rarely portrayed accurately. For example, about 3 in 10 (31 percent) of Blacks and a quarter of Hispanics (24 percent) say they are rarely or never portrayed in the news media accurately, compared to 14 percent of Whites. 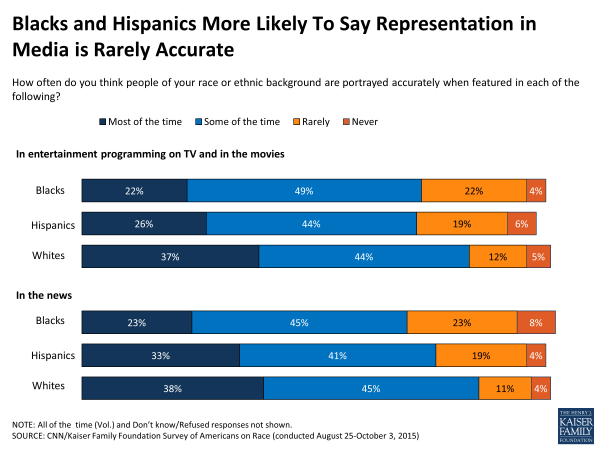 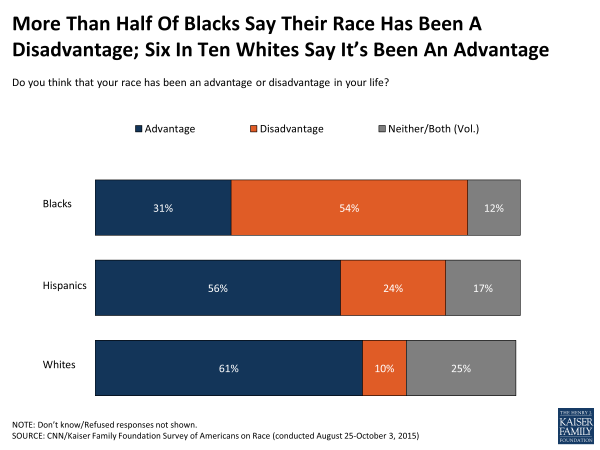 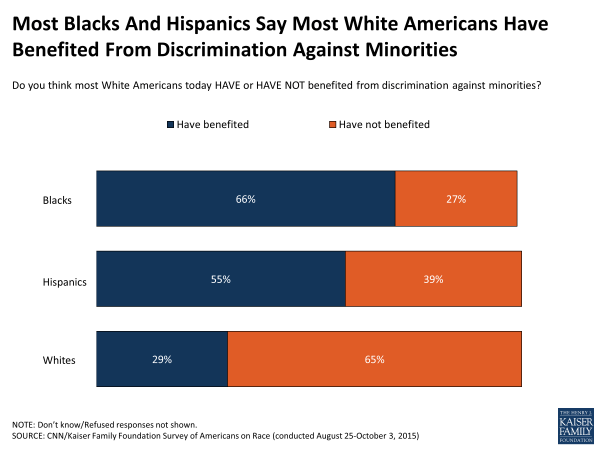