Section 3: Perceptions of the Problem

Across the country, Americans feel that racial tensions are increasing on a national level, but at a more local level, Americans feel tensions are remaining the same. More than half of Americans – Blacks, Hispanics, Whites, rural and urban alike – say racial tensions have increased in the country over the past decade, while roughly a quarter say that tensions have stayed about the same. Compared to a similar survey conducted in 1995 – a time when the nation had just witnessed the Million Man March as well as the Rodney King riots a few years prior in 1992 – Whites today are more likely to say that racial tensions in the country have increased over the past 10 years (67 percent versus 45 percent in 1995), while the shares of Blacks and Hispanics who say tensions have increased have largely held steady, after dipping in 2001, a time void of major, nation-wide race-related events.

In contrast to perceptions of racial tensions nationwide, when it comes to sensing racial tension within their own community, most people (57 percent) say it has stayed about the same over the past 10 years. While most of those in urban areas1 also say tensions have stayed the same over the past decade, they are slightly more likely to say tensions have increased than those in non-urban areas (28 percent versus 20 percent). In addition, Blacks and Hispanics are more likely than Whites to say they these tensions have increased within their own communities – about 3 in 10 Hispanics (31 percent) and Blacks (27 percent) feel that racial tensions within their community are picking up, compared to about 2 in 10 Whites (21 percent). 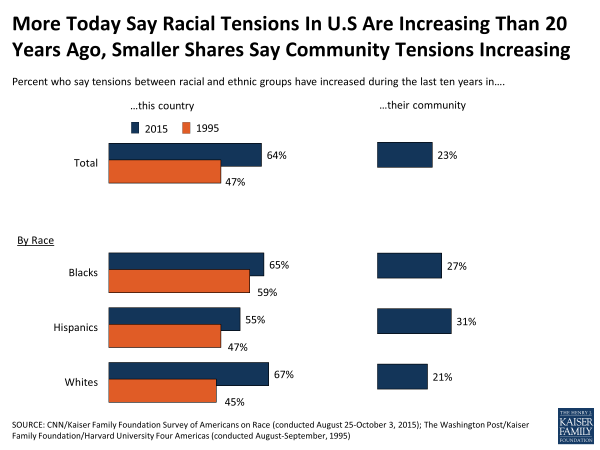 Although the share of Americans who say racism is a big problem has seen modest increases compared to 1995, there is a much larger increase when compared to 2011 when just 28 percent of the public held this view.   This seems to reflect the fact that when tensions are more visible and highlighted in the news, Americans are more likely to report increasing tensions in surveys. In 2011, Americans’ attention was likely on other domestic and international events, such as the Fukushima nuclear power plant crisis, protests and uprisings throughout many Middle Eastern and northern African countries, also known as the Arab Spring, and the Occupy Wall Street movement. 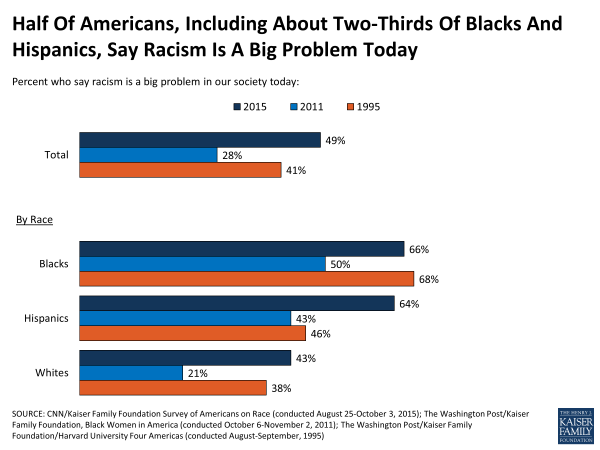 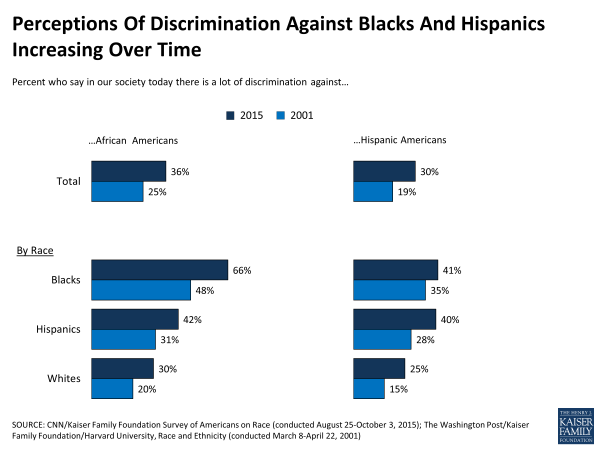 What’s Driving Discrimination and Who’s Responsible for Improving it 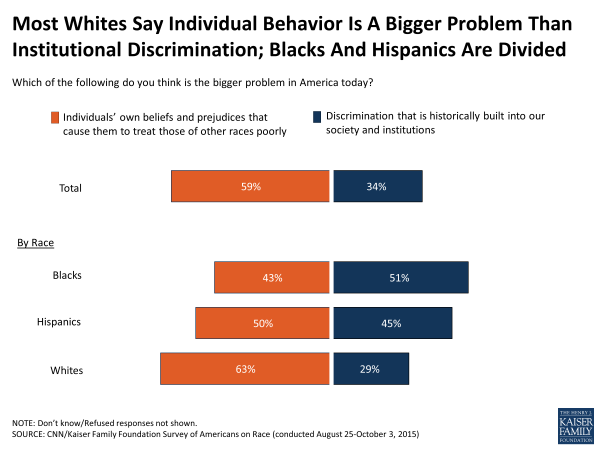 Echoing the majority view that the bigger problem is in individuals personal beliefs and prejudices, more than 8 in 10 (85 percent) Americans see individuals themselves playing a major role in improving race relations in the U.S., higher than the shares that say other groups should play a major role such as their local governments (54 percent), the federal government (50 percent), or the news media (50 percent). With the exception of individual responsibility, Whites are much less likely than Blacks and Hispanics to say that local government, federal government or the news media should play a major role in improving race relations, and are more likely to say that role should be minor or that they should play no role at all. 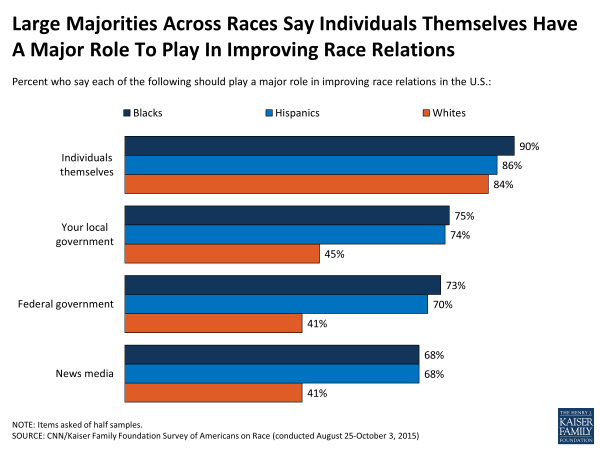 Moreover, while half of Americans say the federal government should play a major role in improving race relations, majorities say it is the government’s responsibility to make sure members of minority groups have schools of equal quality and equal treatment by the courts and police, including roughly 6 in 10 Whites and 8 in 10 Blacks and Hispanics. However, when it comes to whether or not the federal government is responsible for ensuring that minorities have equal incomes to Whites, the public is divided (47 percent say it is versus 49 percent who say it is not). There are distinct differences by race on this issue, as more than 6 in 10 Blacks (67 percent) and Hispanics (63 percent) say it is the responsibility of the federal government to ensure income equality, while nearly as many Whites say it is not (57 percent). 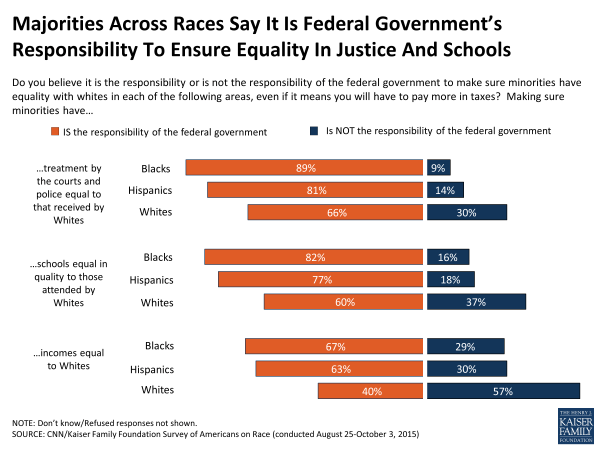 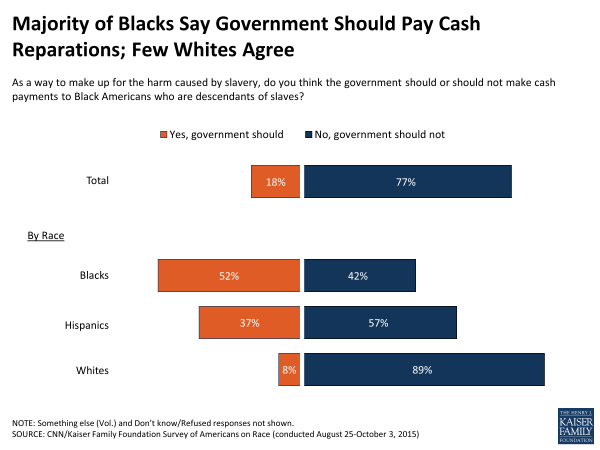 Looking forward to the 2016 presidential election and who will head the federal government moving forward, there is little consensus about whether the campaigns so far are dedicating too much or too little attention to issues of race. Black Americans are fairly divided across the board, with roughly a third saying the issue has gotten too much (35 percent), too little (34 percent), or the right amount of attention (28 percent). Nearly half of Hispanics (48 percent) say the issue has gotten too much attention in the presidential campaigns, while roughly four in ten Whites (43 percent) say the amount of attention is about right. 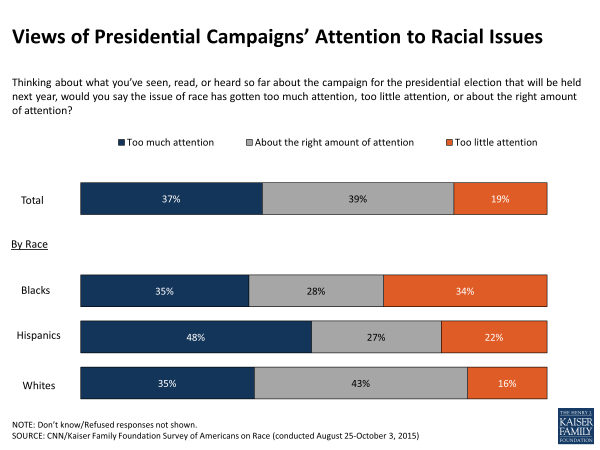 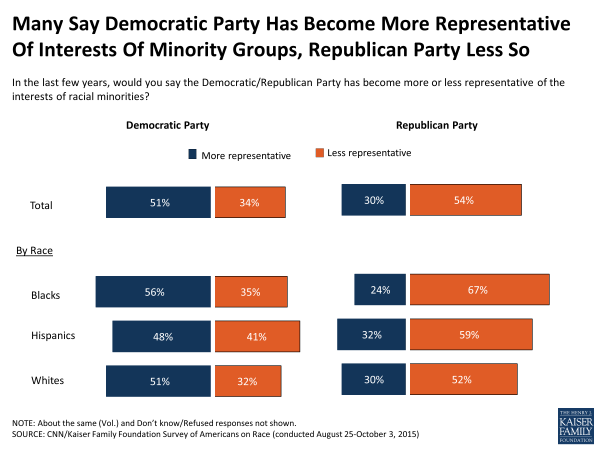