While most (65 percent) Americans say they are at least somewhat satisfied with their personal financial situation, about half of blacks (51 percent) say they are dissatisfied, compared to about 3 in 10 Whites and Hispanics (31 percent each). However, Black Americans are more likely to say that achieving the American Dream is easier for them than it was for their parents (55 percent say it is easier and 36 percent say it is harder), while Whites are more likely to say it’s harder (56 percent say harder and 35 percent say easier). Hispanics are divided with 52 percent saying it is easier now to achieve the American dream than it was for their parents and 42 percent saying it is harder. 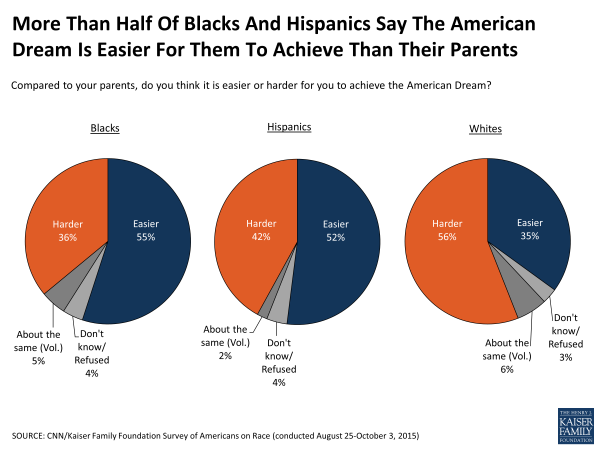 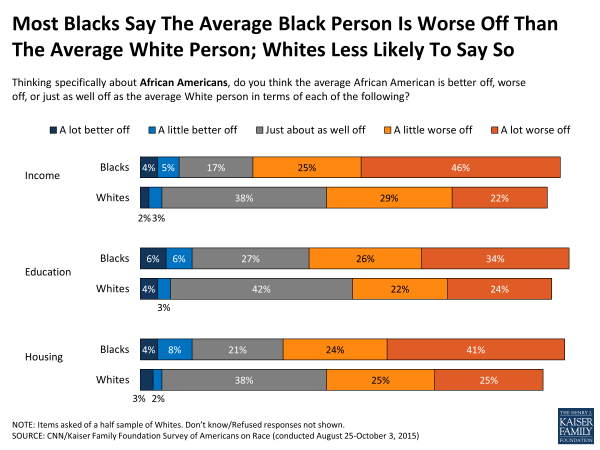 Interestingly, when it comes to how the average Hispanic person fares compared to the average White person, there are fewer differences in opinion by race.  Similar shares of Whites and Hispanics say that the average Hispanic is worse off in terms of income, education and housing. In addition, about equal shares say they are just as well off on all three measures. 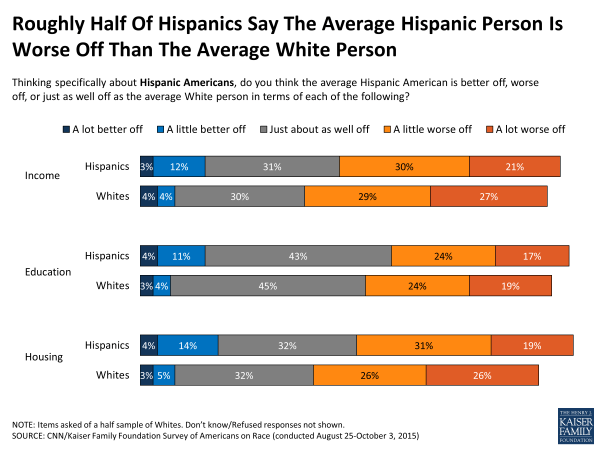 Views of Factors Holding Blacks and Hispanics Back

When asked whether certain factors were reasons for the economic and social problems facing African Americans today, roughly two-thirds of Black Americans say that past and present discrimination (69 percent) and lack of jobs (64 percent) are major reasons for these problems. About six in ten of Blacks say the breakup of the African American family (61 percent) and 55 percent of Blacks say lack of educational opportunities are major reasons. Fewer, but still a sizeable share (42 percent), say that lack of motivation and unwillingness to work hard is a major reason. While about half of White Americans (51 percent) agree with Blacks that the breakup of the African American family is a major reason for the problems facing the Black community, Whites are much less likely to say past and present discrimination, lack of jobs, and lack of educational opportunities are major factors. 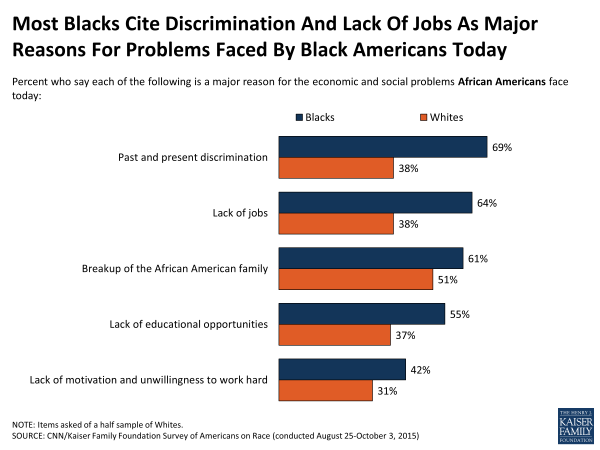 On reasons for the social and economic problems that the Hispanic community faces today, roughly six in ten Hispanic Americans say that lack of educational opportunities (62 percent), lack of jobs (61 percent), language problems (58 percent), past and present discrimination (57 percent), and the breakup of the Hispanic American family (56 percent) are major reasons. Like Hispanics, a majority of Whites say language problems are a major reason for problems facing the Hispanic community, whereas for the other factors, half as many Whites as Hispanics consider them major reasons. Over 4 in 10 Hispanics (43 percent) say that lack of motivation and unwillingness to work hard is a major reason for problems in their community, compared to only 13 percent of White Americans who share the same view. 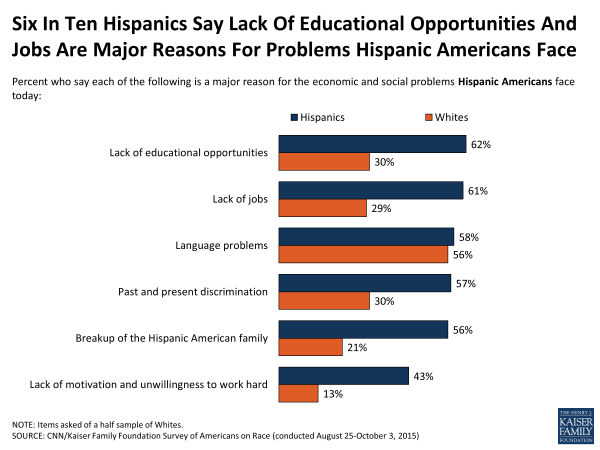 Some see affirmative action as a way to moderate some of the institutional barriers and discrimination facing members of minority groups. However, nearly 8 in 10 Americans (78 percent) say that hiring, promotion, and college admission should be based strictly on merit and qualifications other than race or ethnicity, while one in five (18 percent) say that because diversity benefits our country economically and socially, race and ethnicity should be a factor in such decisions. Whites (80 percent) are somewhat more likely to say advancement should be based on merit than Blacks (74 percent) and Hispanics (73 percent), but still large shares of Blacks and Hispanics say the same. There is more support for considering race in these decisions among Blacks and Whites with college degrees when compared to their less educated peers (Whites 27 percent versus 12 percent; Blacks 39 percent versus 15 percent). There are no significant differences by education level among Hispanics. 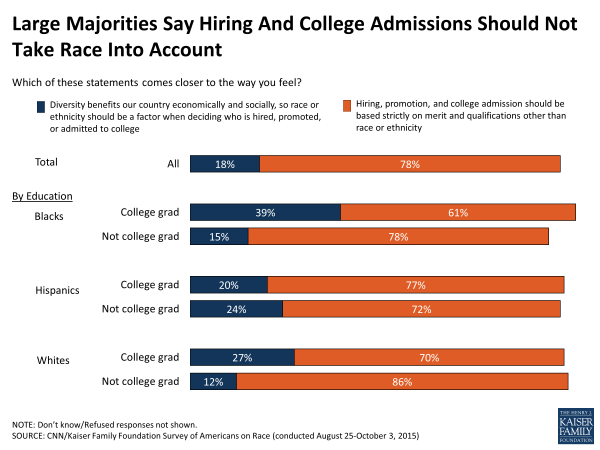 Section 3: Perceptions of the Problem Section 5: Changes Over Time