Section 2: Views on Priorities and Preparedness Among Residents Overall

When asked about their priorities for rebuilding and recovery in their area, Texas Gulf Coast residents – including those affected by the hurricane and those who were not – identify many areas where more resources are needed, with the largest focus being on preparedness for future storms and providing financial and housing help to those in need.

The highest-ranking priority for residents overall is development of flood prevention and control strategies; about two-thirds (68 percent) say more resources are necessary in this area. In another forward-looking priority, nearly as many (64 percent) say more resources are necessary for community preparedness for future disasters. Just below these priorities are two items related to basic needs for those recovering from Harvey: getting financial help to people who need it (63 percent) and rebuilding destroyed homes (62 percent). About half say more resources are needed in getting mental health services to those who need them (52 percent, an increase from 42 percent in the first post-Harvey survey), helping small businesses affected by the storm (51 percent), and repairing roads and highways (49 percent, up from 40 percent in the first survey). Four in ten say more resources are needed for repairing damaged schools (44 percent) and rebuilding community spaces like recreation centers and parks (42 percent). 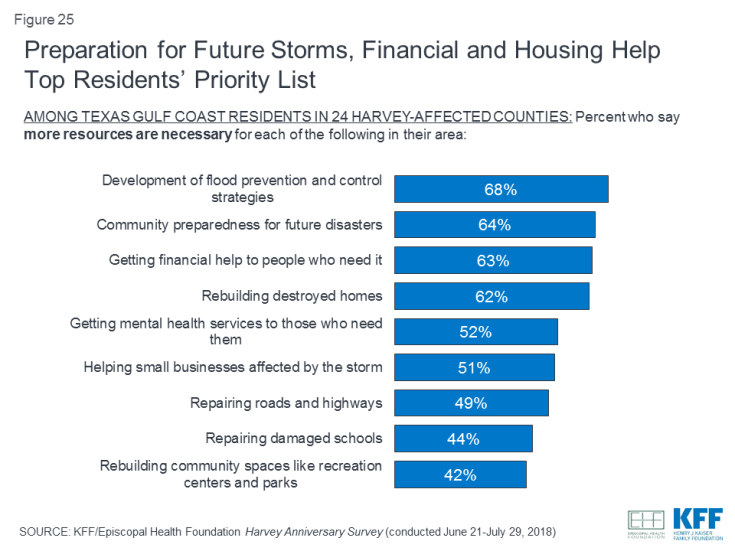 Overall, a slim majority (54 percent) of Texas Gulf Coast residents say they are “very” or “somewhat” confident that the money being spent on hurricane relief in Texas is benefiting the people who need it most. On the other hand, about four in ten (42 percent) say they are either “not too confident” or “not at all confident.”

Among those who personally felt more severe impacts from the storm, however, fewer say they are confident that relief money is benefiting those most in need. For example, while six in ten residents who were not affected by Harvey are confident that funds are going to those who need them most, those who personally experienced property damage or income loss are more evenly split (50 percent confident, 46 percent not confident). Among some of the most heavily impacted groups, including those who say their mental health has worsened as a result of Harvey, that their application for federal assistance was denied, or that someone in their household has a new or worsened health condition due to the storm, roughly two-thirds say they are not confident that the money being spent on hurricane relief in Texas is benefiting the people who need it most. 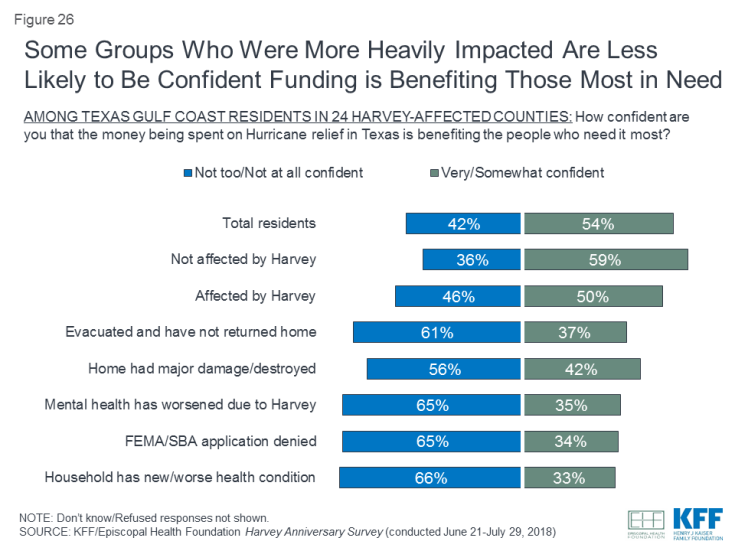 Figure 26: Some Groups Who Were More Heavily Impacted Are Less Likely to Be Confident Funding is Benefiting Those Most in Need

While Texans in the 24-county area recognize many different groups who have been helped by the relief efforts, some groups are perceived to have been helped more than others. About six in ten think efforts to rebuild the Texas gulf coast area after Hurricane Harvey have done either “a lot” or “some” to help wealthy and middle class people, but four in ten (42 percent) say efforts have done either “not too much” or “nothing at all” to help poor people. Along the same lines, residents are somewhat more likely to say relief efforts have helped people who are white (63 percent) than say the same about people who are African American (55 percent) or Hispanic (53 percent). About half of residents say efforts have done at least some to help people like them, whereas fewer (39 percent) say the same about immigrants. It’s worth noting that roughly one in five residents say they are not sure how much relief efforts have done to help some of these groups. 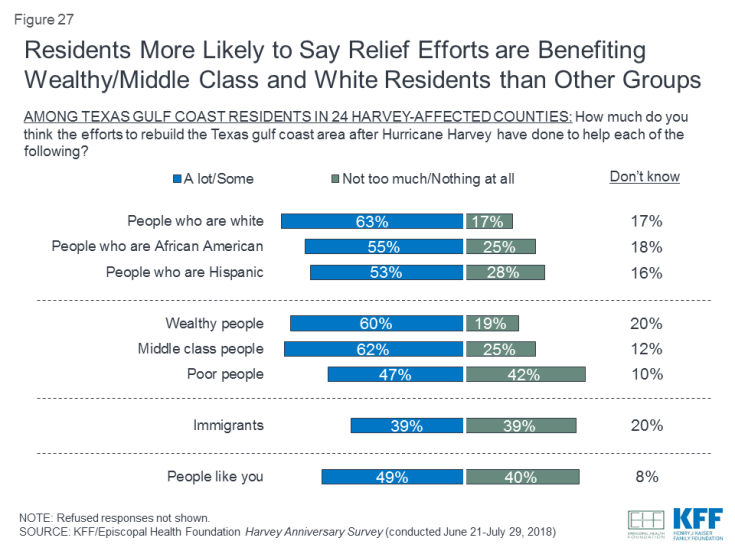 In June 2018, the federal government approved a $5 billion federal block grant plan for Hurricane Harvey relief in Texas.1 This plan will allow the public to provide input into how long-term federal funds are spent. One in five residents in the 24 Texas counties surveyed say they are aware that the federal government has provided funding to help Texas with long-term recovery and rebuilding, while 6 percent say it has not provided any funding, and a large majority (73 percent) do not know enough to say. Of the share who are aware of long-term federal funding, roughly half (9 percent of all Texans in the 24-county area) say there is a way for the public to provide input and about a third (7 percent of all residents) say there is no way for the public to provide input. 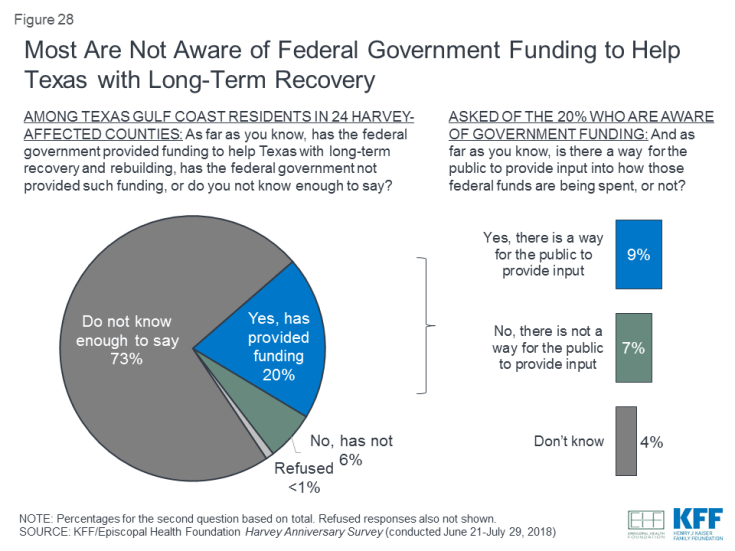 Figure 28: Most Are Not Aware of Federal Government Funding to Help Texas with Long-Term Recovery

Looking to The Future: Preparedness for Future Storms

With hurricane season once again underway, the survey examined residents’ views on their own preparedness and the preparedness of government officials to deal with future storms. Overall, majorities of residents see officials at each level of government as at least somewhat prepared to deal with future hurricanes. Three-quarters (75 percent) say that both Texas state officials and local officials in their city, town, or county are either “very prepared” or “somewhat prepared” to deal with hurricanes in the future, while about two-thirds (64 percent) say the same about federal government officials. 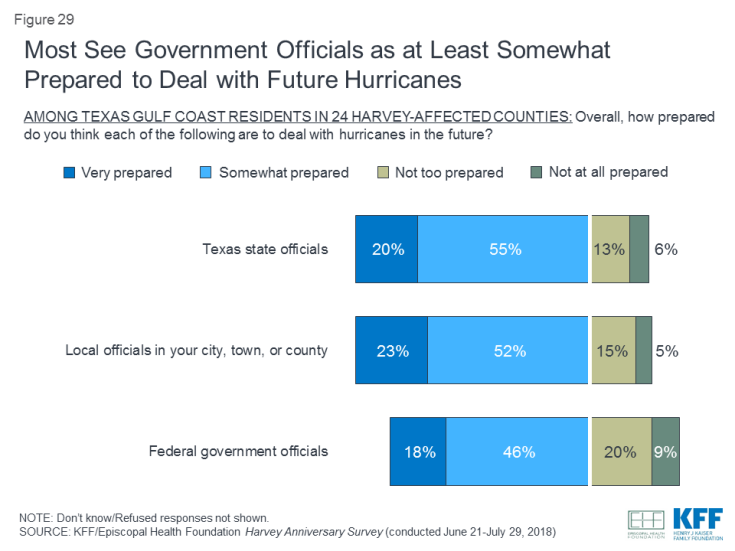 Figure 29: Most See Government Officials as at Least Somewhat Prepared to Deal with Future Hurricanes

While majorities of residents in each of the four regions surveyed say that local officials are at least somewhat prepared to deal with future hurricanes, those living in the Golden Triangle are somewhat more likely than those in other regions to say officials are “not too” or “not at all” prepared (30 percent versus between 18 and 21 percent in other areas). 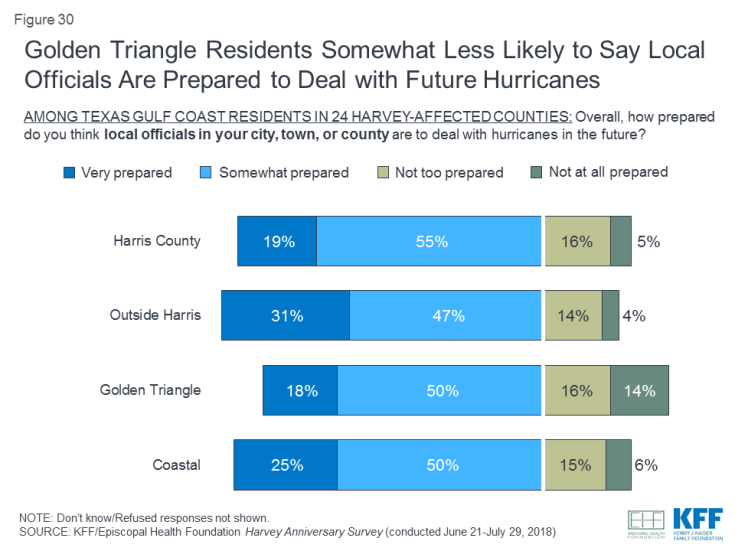 On a more personal level, roughly three-quarters of residents also say that they themselves are either “very prepared” (32 percent) or “somewhat prepared” (45 percent) to deal with future hurricanes. However, there are differences by self-reported income and race/ethnicity in how prepared people feel. Residents with lower household incomes below 200 percent of the Federal Poverty Level are almost three times as likely as those with higher incomes to say they are not prepared to deal with hurricanes in the future. Similarly, a larger share of Black and Hispanic residents say the same compared to their white counterparts.

Although a large majority of Texas Gulf Coast residents say they feel prepared to deal with future hurricanes, about half (52 percent) say they and their family have not actually taken any steps to do so since last year. The other half (47 percent) say they have taken steps to prepare for future hurricanes, including at least three in ten who say they have prepared a disaster supply kit with emergency supplies (36 percent) or disaster communications plan for their family (30 percent). Fewer say they have made physical changes to their home (16 percent) or purchased additional homeowners’ or renters’ insurance (9 percent). 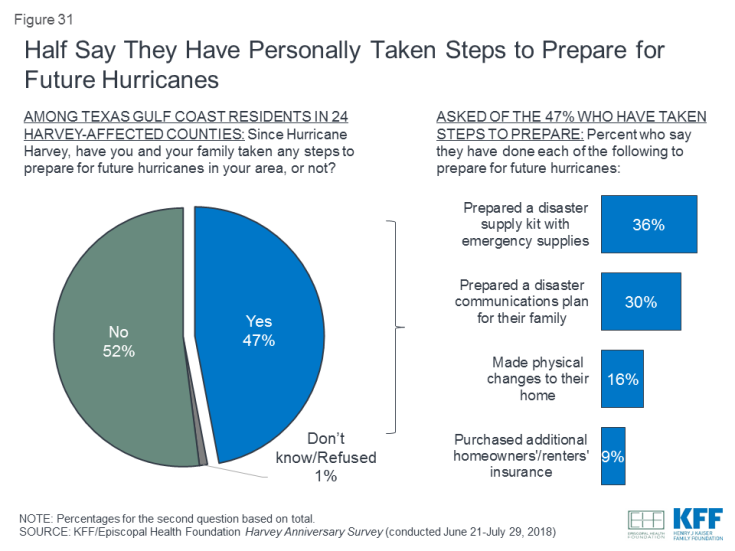 Figure 31: Half Say They Have Personally Taken Steps to Prepare for Future Hurricanes

The share who say they’ve taken steps to prepare for future hurricanes does not differ by race/ethnicity or income, but residents of the Golden Triangle are somewhat more likely than those in other regions to report taking such steps (see Table 6).