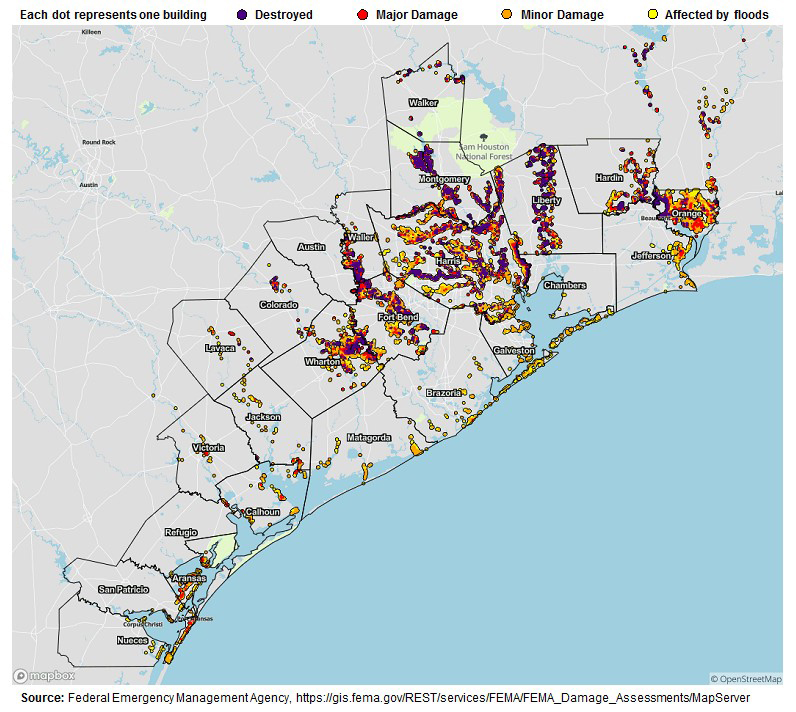 Appendix A – Figure 1. Counties included in survey sample based on FEMA damage assessments

Interviews were administered in English and Spanish, combining random samples of both cellular and landline telephones (note: persons without a telephone could not be included in the random selection process). Sampling, data collection, weighting and tabulation were managed by SSRS in close collaboration with Kaiser Family Foundation and Episcopal Health Foundation researchers. Episcopal Health Foundation paid for the costs of the survey fieldwork, and Kaiser Family Foundation contributed the time of its research staff. Both partners worked together to design the survey and analyze the results.

The sampling procedures were designed to reach set numbers of respondents in each of the four county-groups and to oversample particular vulnerable subpopulations who were likely to require assistance in the aftermath of the hurricane, namely: people who experienced property damage as a result of the hurricane, specifically those with household incomes near or under poverty level, Hispanic residents (in particular, non-native Hispanics), and Black residents. Some respondents were reached by oversampling cellular and landline numbers matching directory-listings in areas where data from the Federal Emergency Management Agency (FEMA) indicated large amounts of property damage due to Harvey. The sampling and screening procedures included an oversample component designed to increase the number of low-income respondents, specifically low-income Hispanic and Black respondents. This included 80 respondents who were reached by calling back respondents in the affected areas who had previously completed an interview on the SSRS Omnibus poll and indicated they fit one of the oversample criteria (based on income and race). In addition, cell phone numbers identified as pre-paid or pay-as-you go were oversampled to reach low-income, Spanish-speaking respondents in areas with a high-density of Hispanic populations.

The dual frame cellular and landline phone sample was generated by Survey Sampling International (SSI) using random digit dial (RDD) procedures. All respondents were screened to verify that they resided in one of the 24 counties covered by this study at the time Harvey hit Texas. For the landline sample, respondents were selected by asking for the youngest adult male or female currently at home based on a random rotation. If no one of that gender was available, interviewers asked to speak with the youngest adult of the opposite gender. For the cell phone sample, interviews were conducted with the adult who answered the phone.

A multi-stage weighting design was applied to ensure an accurate representation of the population of each county-group. The first stage of weighting involved corrections for sample design, including accounting for oversampling of the most-affected areas and the prepaid oversample, as well as non-response for the callback sample. In the second weighting stage, demographic adjustments were applied to account for systematic non-response along known population parameters, within each county-group. Population parameters included gender, age, race, Hispanicity (broken down by nativity), educational attainment, and phone status (cell phone only or reachable by landline). This stage excluded the oversample components. Based on this second stage of weighting, estimates were derived for the share of low-income respondents (Black, Hispanic and other) in the population. The third stage of weighting included all respondents in each county-group and included income-status (low or high) by race/ethnicity based on the previous stage’s outcomes. In the last stage each county-group was weighted to accurately represent its adult-population share within the Affected Area. Weighting parameters were provided by SSI based on recent estimates from the U.S. Census Bureau’s 2016 American Community Sample (ACS) for Harris County and 5-year (2011-2015) cumulative data from the ACS for other county groups. Phone status was derived from the first wave’s sample of respondents for each county-group on the SSRS Omnibus poll.

As part of this project, the Kaiser Family Foundation and the Episcopal Health Foundation conducted focus groups to gather qualitative data from vulnerable populations affected by Hurricane Harvey. Topics covered in the focus groups were similar to those covered in the survey. Two groups each were held in Houston (July 24 and July 25), Port Arthur (July 24), and Dickinson (July 25, 2018). In total, six two-hour groups were conducted with eight participants each.

To qualify for each group, individuals must have said: 1) that their home or the place they were living had major damage or was destroyed as a result of Hurricane Harvey, and 2) that their day-to-day life was still very or somewhat disrupted at the time of the focus group screening. An effort was made to mainly include participants with incomes below 200% of the federal poverty level. However in order to fill the Port Arthur and Dickinson groups, a few participants with somewhat higher incomes were included. Recruitment aimed to target a mix of men and women, and a mix of owners and renters.

The two Houston groups were conducted with Hispanics in Spanish – one of which consisted of participants who self-identified as undocumented immigrants and one with people born outside the U.S. who reported having legal resident status. Participants of all races/ethnicities were recruited for the Port Arthur and Dickinson groups and were interviewed in English. However, reflecting the demographics of Harvey-affected residents in the area, nearly all of the participants in Port Arthur were African American. Participants in Port Arthur and Dickinson were given an incentive of $100, and participants in Houston were given $125 since the groups were conducted in the morning, a more difficult time to recruit for.

ConneXion Research recruited and provided moderator services for each group. The Houston groups were held at ConneXion’s research facility, and the Port Arthur and Dickinson groups were held in meeting rooms at local churches. The screener questionnaire and discussion guide were developed by researchers at the Kaiser Family Foundation and the Episcopal Health Foundation, and translated into Spanish by ConneXion Research. Groups were audio and video recorded with participants’ permission. Focus group costs were paid for by the Episcopal Health Foundation.

Section 2: Views on Priorities and Preparedness Among Residents Overall Appendix B: Share of Residents Affected by Hurricane Harvey by Geography, Race/Ethnicity, and Income