As enacted, the ACA expanded Medicaid eligibility to adults with incomes at or below 138 percent of the federal poverty level (FPL) ($27,310 for a family of three in 2014), although this core provision was effectively made a state option by the Supreme Court’s 2012 ruling on the ACA. However, other eligibility changes in the law were unaffected by the Court’s decision, including establishing a new minimum coverage level of 138 percent of the FPL for children of all ages in Medicaid, helping to align Medicaid coverage across children. The ACA also changed the method for determining financial eligibility for Medicaid for children, pregnant women, parents, and adults and CHIP to a standard based on modified adjusted gross income (MAGI).1 This new approach is intended to prevent gaps in coverage between programs by largely adopting the rules for determining eligibility for subsidies to purchase Marketplace coverage. While these changes went into effect on January 1, 2014, some states continued to refine the conversion of their pre-ACA eligibility levels to MAGI-based standards. The findings below reflect eligibility levels for parents and other non-disabled adults, children, and pregnant women in Medicaid and CHIP as of January 1, 2015. They highlight Medicaid’s expanded role for low-income adults under the ACA and its continued role as a primary source of coverage for children and pregnant women. 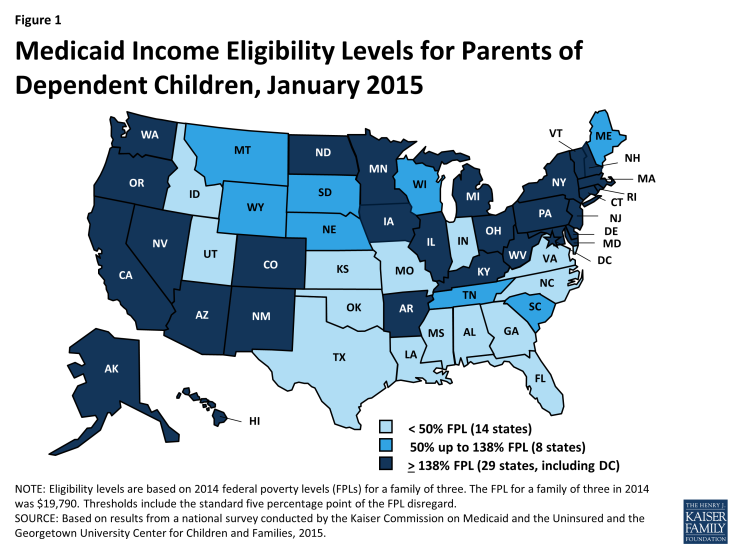 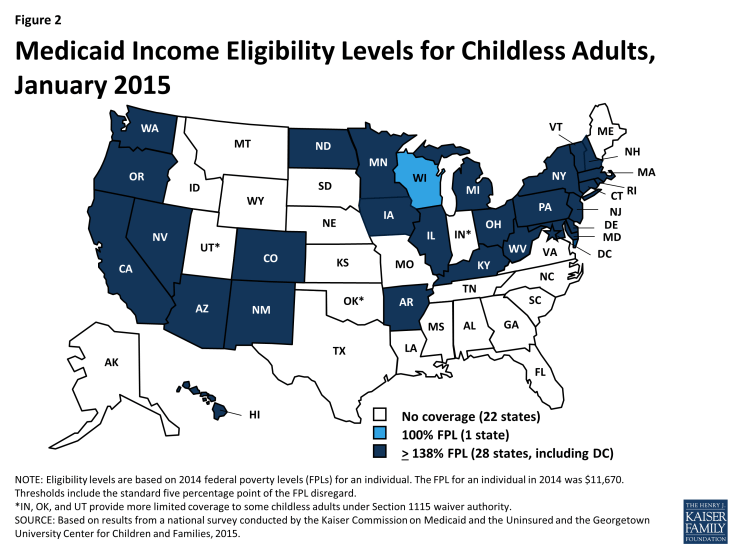 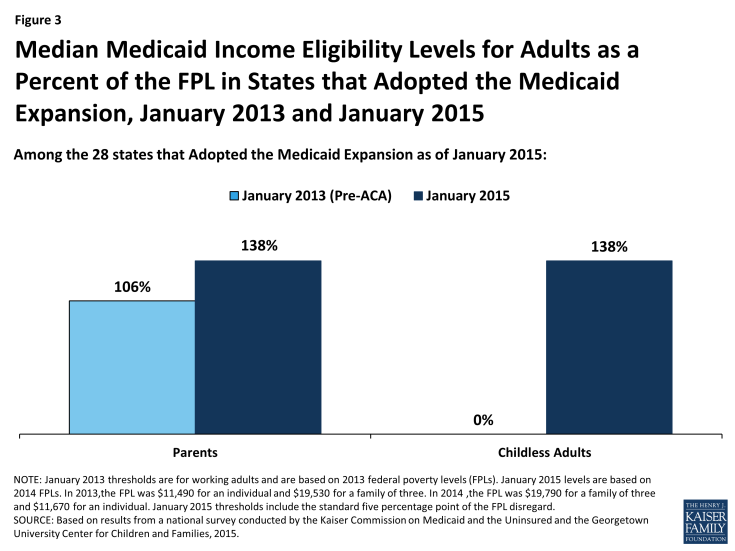 Figure 3: Median Medicaid Income Eligibility Levels for Adults as a Percent of the FPL in States that Adopted the Medicaid Expansion, January 2013 and January 2015 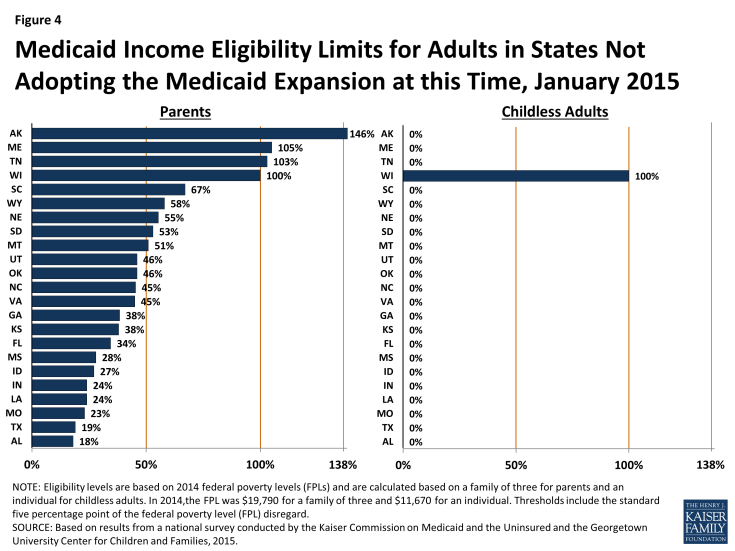 Figure 4: Medicaid Income Eligibility Limits for Adults in States Not Adopting the Medicaid Expansion at this Time, January 2015 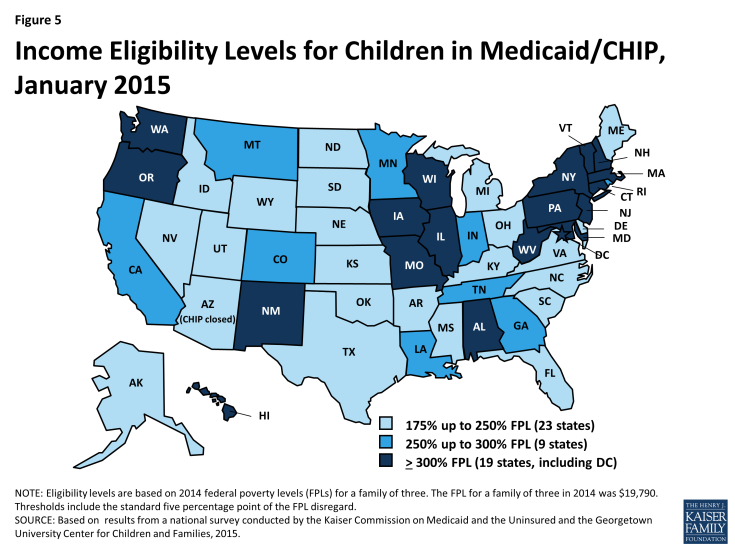 States have continued to take up options that expand children’s access to coverage. Consistent with the ACA’s vision of a seamless continuum of coverage options, 21 states eliminated waiting periods in CHIP, including California which transitioned its separate CHIP program into Medicaid, and seven states reduced their waiting periods to 90 days or less, consistent with new federal rules. Illinois expanded CHIP coverage in 2013, with the expansion group between 209% and 317% FPL subject to a three-month waiting period. Reflecting this state action, as of January 1, 2015, 33 states do not have a waiting period that requires that a child be without group coverage for a specified period of time before enrolling in CHIP (Figure 6). In addition, more than half of all states (28) have taken up the option, established in 2009, to eliminate the five-year waiting period for lawfully-residing immigrant children, with Kentucky, Ohio and, West Virginia recently adopting the option. Additionally, seven states provide fully state- or locally-funded coverage to some children regardless of their immigration status. Under the ACA, all states must provide Medicaid coverage to former foster youth up to age 26 if they were in foster care in the state and enrolled in Medicaid on their 18th birthday. Nearly a quarter of states (12) have chosen to extend this coverage to former foster youth from other states. Six states have maintained programs that allow families with incomes over the upper limit for children’s coverage to buy into Medicaid or CHIP for their children, although this number has declined from its peak of 15 in 2011, reflecting the fact that higher income families now have new coverage options through the Marketplaces. 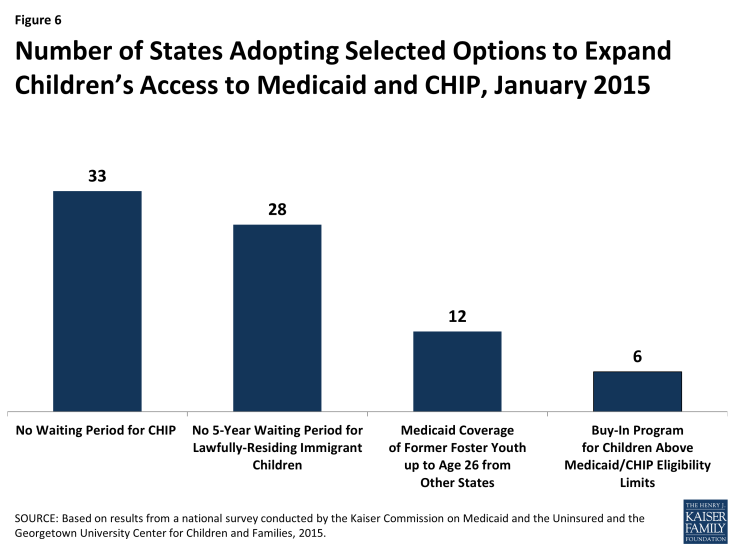 Nearly two-thirds of states (33) cover pregnant women with incomes at or above 200 percent of the FPL (Figure 7). This count reflects the reinstatement of CHIP coverage for pregnant women with incomes up to 205 percent of the FPL in Virginia during 2014. Ohio, West Virginia, and Wyoming also recently took up the option to eliminate the five-year waiting period for lawfully residing immigrant pregnant women, increasing the total number of states that have adopted this option since it was established in 2009 to 23. Further, 15 states cover income-eligible pregnant women regardless of immigration status through CHIP’s unborn child option, while four states provide fully state-funded coverage to some immigrant pregnant women. 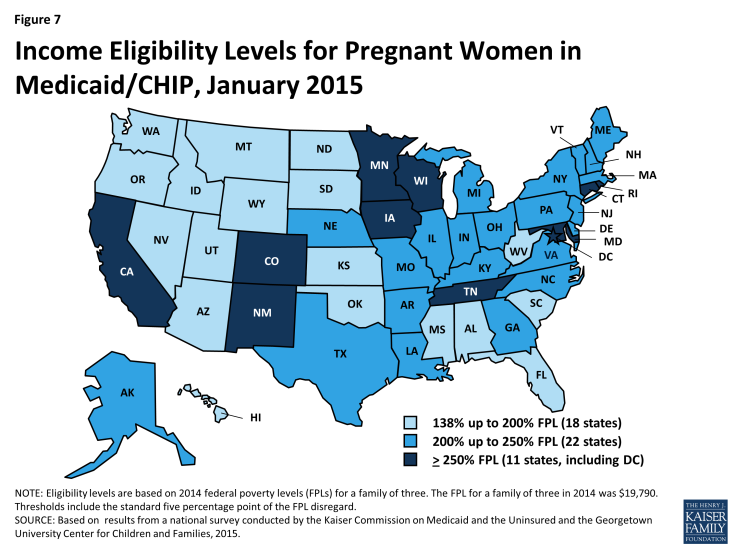 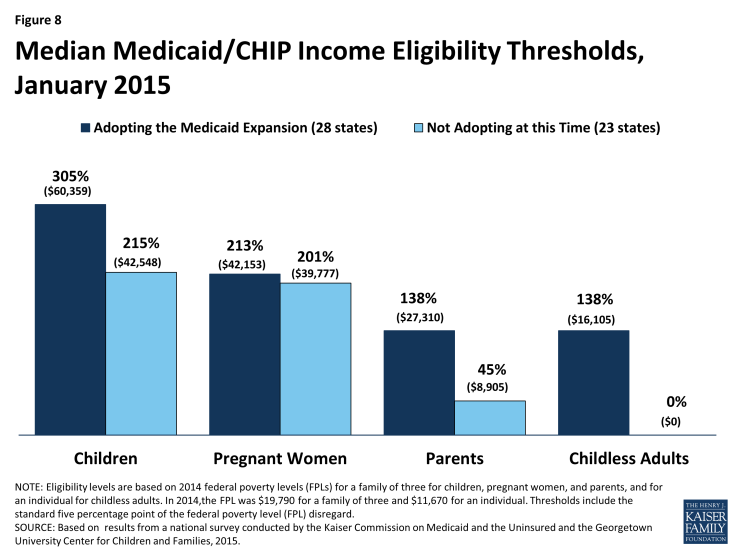