In order to implement the new modernized, data-driven enrollment and renewal processes outlined in the ACA, most states needed to make major improvements to or build new Medicaid and CHIP eligibility determination systems, often replacing decades-old legacy systems. Harnessing technology within Medicaid and CHIP can enhance the consumer experience and improve the reliability, timeliness and administrative efficiency of eligibility determinations and ongoing case management for enrollees. To support system upgrades and builds, the federal government provided 90 percent federal funding for system design and development. This increased funding was initially set to expire at the end of 2015, but, in October 2014, CMS announced plans to extend the higher federal match permanently.1 The ongoing availability of enhanced funding will give states more time to phase in additional functionality and help systems stay current as technology evolves in the future. States have made significant progress developing efficient, interconnected eligibility and enrollment systems, but ongoing efforts will be needed to refine and enhance systems to fulfill the vision of the ACA. 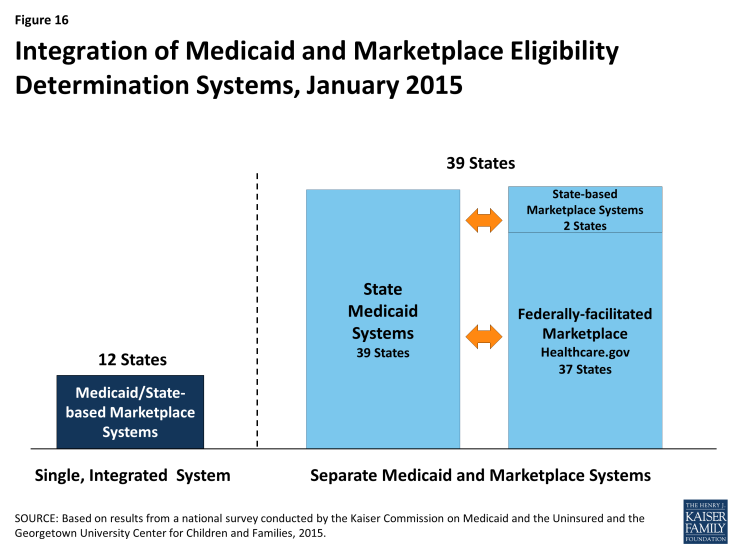 Many states delinked Medicaid eligibility determination systems from other benefit programs as they deployed new MAGI-based systems, but a number plan to reintegrate eligibility for other programs in the future. Prior to the ACA, the majority (45) of state Medicaid eligibility determination systems were integrated with other assistance programs, such as SNAP or TANF. As states implemented new ACA eligibility determination and enrollment processes for Medicaid and upgraded or built new eligibility systems, many delinked Medicaid from these other programs due to the large scale of the changes. As of January 1, 2015, 19 states maintain systems that administer eligibility for Medicaid and other benefit programs (Figure 17). However, this number will likely grow over time, as 12 states indicate that they plan to phase in other assistance programs in 2015 or beyond. These efforts are further supported by CMS’ intent to extend the opportunity for non-health programs to pay only the add-on costs associated with integrating into newly enhanced Medicaid systems through 2018.3 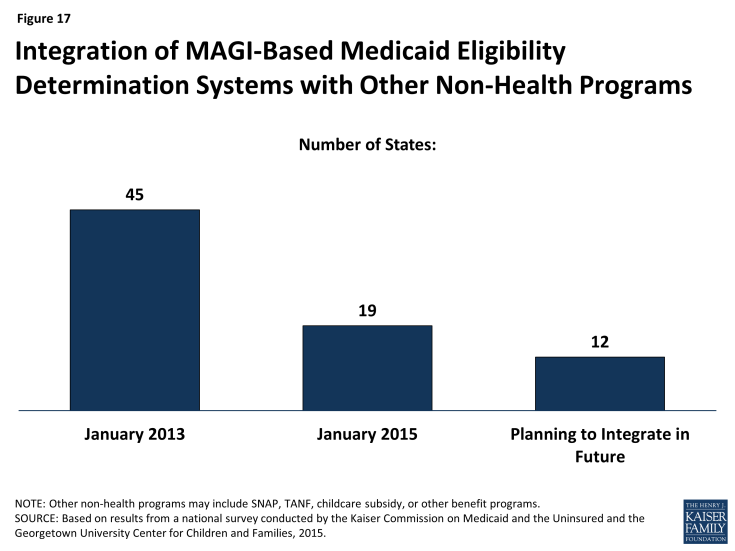