The ACA enacted sweeping changes to transform application, enrollment, and renewal processes in Medicaid and CHIP and coordinate with the new Marketplaces. Together these processes are intended to achieve the ACA’s vision to provide “no wrong door” access to all health coverage options, minimize the paperwork burden on consumers and state agencies, and enhance the consumer experience. Specifically, under the ACA, states must provide multiple options for individuals to apply for health coverage, including online, by phone, by mail, and in person, using a single streamlined application for Medicaid, CHIP, and Marketplace coverage. In addition, states must seek to rely on electronic data to verify eligibility criteria and renew coverage based on electronic data matches. Adoption of these procedures represents major modernization in many states that previously had relied on antiquated, paper-based enrollment processes for Medicaid and CHIP. States have achieved significant progress adopting many of these processes, but work continues in many areas.

As of January 1, 2015, individuals can apply online for Medicaid at the state level in all states, except Tennessee. Most states with a State-based Marketplace (SBM) (12 of 17) provide a single integrated online application portal for Medicaid and Marketplace coverage. All states relying on the Federally-facilitated Marketplace (FFM) for Marketplace eligibility and enrollment functions maintain their own online Medicaid application separate from Healthcare.gov, as required, except Tennessee, where individuals can only apply online for Medicaid through Healthcare.gov. In about half of all states (25), an online multi-benefit application is available that allows individuals to apply simultaneously for Medicaid and other benefits, such as SNAP or Temporary Assistance for Needy Families (TANF). The availability of an online Medicaid application in nearly all states represents substantial progress from just several years ago; an online option was available in only two-thirds of states (34) as of January 2012 and 37 states as of January 2013 (Figure 9). 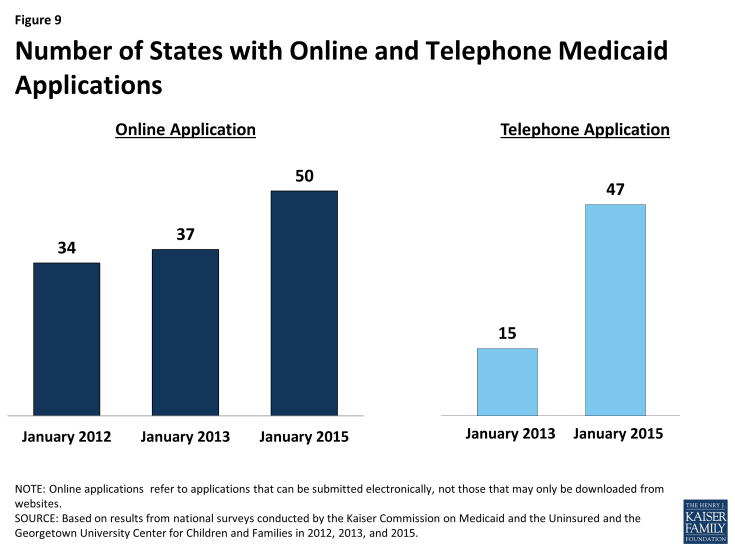 Figure 9: Number of States with Online and Telephone Medicaid Applications

There is variation across states in the functions of online applications and the availability and features of online Medicaid accounts. In most states (47), applicants can start, stop, and return to the online application, and, in just over half of states (27), the online application provides applicants the ability to upload electronic copies of documentation if it is required (Figure 10). More than two-thirds of states (36) also provide individuals the opportunity to create an online account for ongoing management of their Medicaid coverage, which may include the ability to review the status of their application (32 states), report changes (29 states), view notices (27 states), authorize third-party access (24 states), and upload documentation (23 states). Many of these states plan to add capabilities over time and additional states plan to add online accounts in 2015 or beyond. 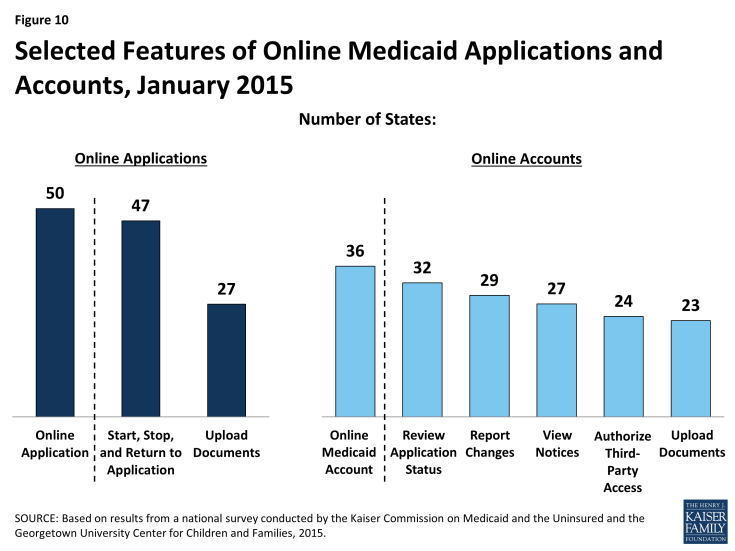 All states are developing their capacities to tap electronic data sources to verify incomes of Medicaid and CHIP applicants, as required by the ACA. States must verify income using electronic data sources to the extent possible. Forty states confirm applicants’ income prior to enrollment, while 11 states process eligibility based on an applicant’s attestation and verify after enrollment (Figure 11). To facilitate electronic verification, a federal data hub was established that allows states to access information from multiple federal agencies, including the Internal Revenue Service, the Social Security Administration, and the Department of Homeland Security. In addition, states can access other databases that collect state wage information, unemployment compensation, vital statistics, and eligibility for other public programs. Verifying eligibility elements is not only technically complicated, but also requires the establishment of data sharing agreements between agencies that protect the privacy and security of personally identifiable information. These challenges can slow state progress in accessing electronic data sources on a timely basis to verify eligibility. Looking ahead, states are continuing to enhance their data matching capabilities. 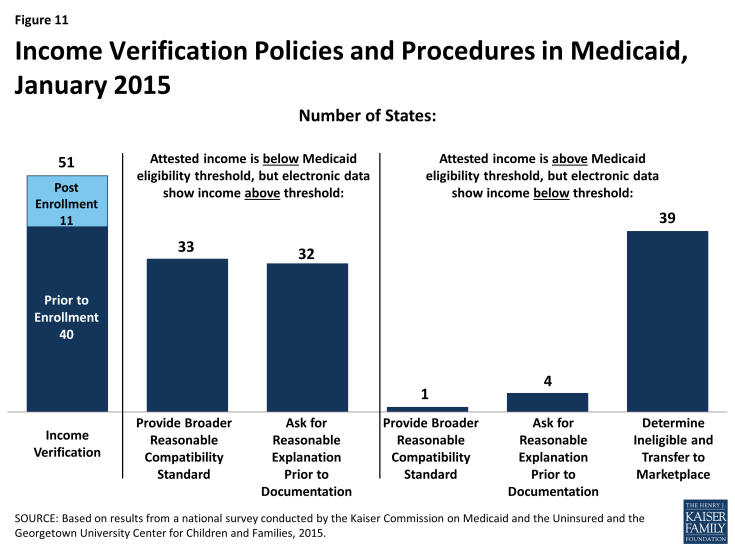 Many states minimize burdens for applicants and states by relying on self-attestation of non-financial eligibility criteria. As is the case with income, states must verify citizenship and immigration status for new applicants through electronic data sources. However, states have additional options to verify other non-financial eligibility criteria, including age/date of birth, state residency, and household composition. For these criteria, states can either verify pre- or post-enrollment or accept self-attestation. Many states accept self–attestation of age/date of birth (21), state residency (35), or household size (39), although verification is required if a state has any conflicting information on file (Figure 12). The remaining states confirm these eligibility criteria prior to enrollment or post enrollment, although most do not verify the information at renewal. Accepting self-attestation simplifies the enrollment process for states and applicants, and past experience shows that reducing paperwork burdens boosts enrollment and retention.1 Historically, some states have been reluctant to minimize documentation requirements due to concerns about penalties associated with inaccurate eligibility determinations. However, moving forward, audits of state eligibility determinations will focus on validating that states’ systems and processes are consistent with the verification plans they must submit to CMS that outline their policies for determining eligibility. 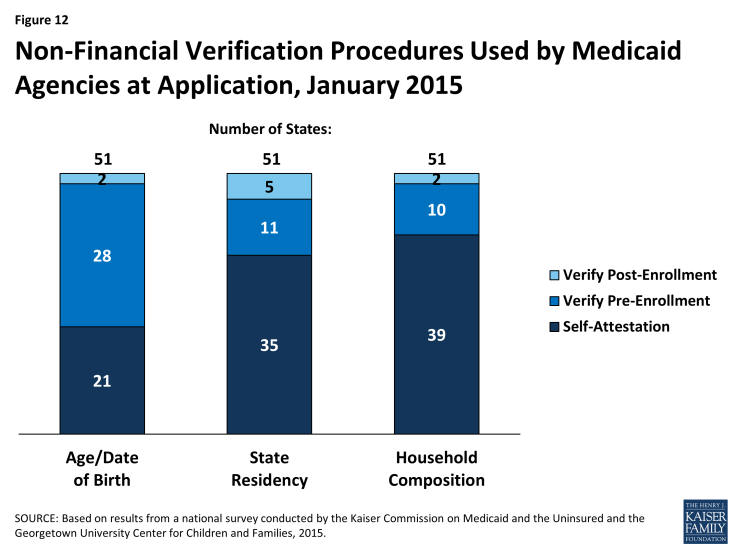 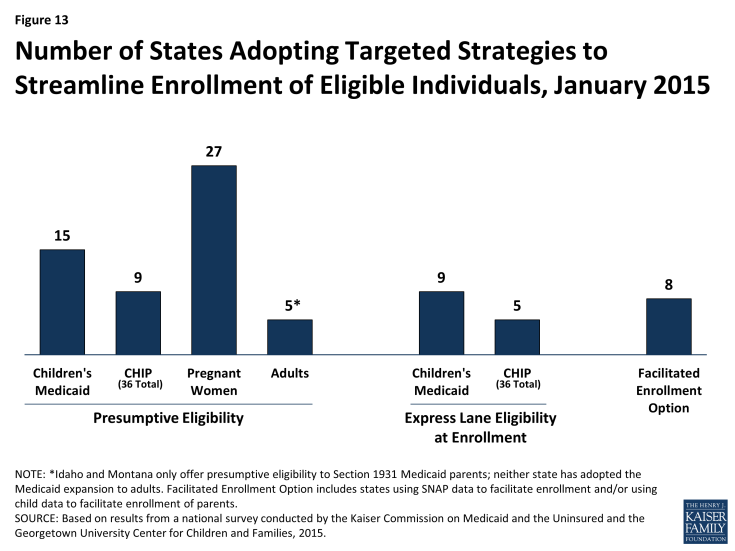 States are making progress adopting automated renewal processes, but transition work continues. Similar to enrollment processes, the ACA calls for new highly automated, paperless renewal processes for Medicaid and CHIP. When possible, states must use available data to renew coverage automatically (also called ex parte renewal). Many states are still implementing and transitioning to these new processes, given a range of challenges including developing system capacity to process automated renewals, transferring data for existing enrollees from old legacy systems to new systems, and creating notices for individuals. In the interim, a number of states are relying on mitigation strategies such as mailing forms to individuals to request the information needed to complete renewal. To ease the transition to new renewal procedures, CMS offered states the opportunity to temporarily delay renewals, an option which 34 states took up for Medicaid and 22 states took up in CHIP during 2014 (Figure 14). About half have completed all of their delayed renewals, although 17 states have extended some of these renewals into 2015. Continued work to address the challenges of adopting new automated renewal processes will be important for preventing coverage losses and gaps and supporting more stable coverage over time. 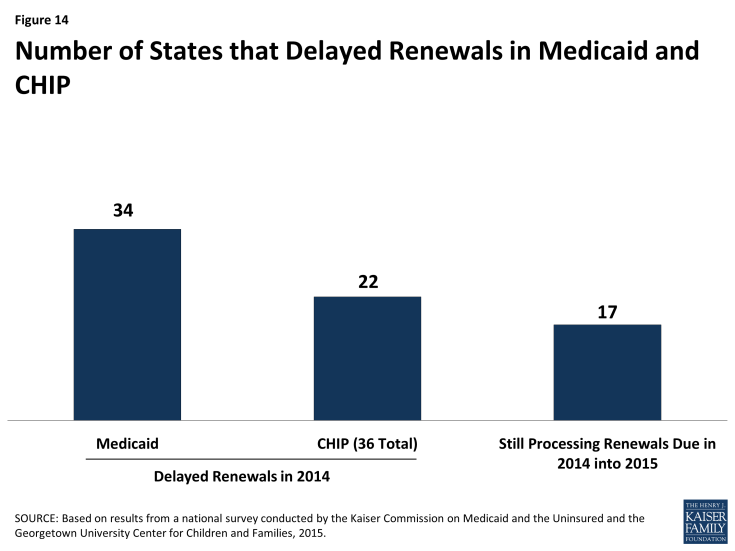 Figure 14: Number of States that Delayed Renewals in Medicaid and CHIP

In July 2014, CMS offered states additional flexible renewal strategies. CMS clarified that states can continue to conduct renewals based on available information without collecting the additional information necessary to coordinate with Marketplace coverage, which includes tax-filing status and access to employer coverage. However, states can only affirmatively renew coverage using this approach and cannot deny coverage without collecting all required information. Additionally, states can receive expedited waiver approval from CMS to renew coverage using information from SNAP, as well as to facilitate renewals for enrollees with no change in circumstances that affect eligibility.

Some states are utilizing other policy options to boost retention and support stable coverage over time. Under the ACA, all states must conduct renewals once every 12 months. States can further support stable coverage and reduce churn resulting from small fluctuations in income by opting to provide 12-month continuous eligibility, which allows individuals to remain enrolled for a full year regardless of changes in circumstances. As of January 1, 2015, 23 states provide 12-month continuous eligibility to children in Medicaid, and 26 have adopted it in their separate CHIP programs (Figure 15). States also can extend 12-month continuous eligibility to parents and other adults under Section 1115 waiver authority, which New York has done for parents to provide consistent procedures for all enrolled family members. Another option available to states to streamline renewal is ELE, which eight states use to renew children’s Medicaid coverage and two states utilize for CHIP renewals. Massachusetts is also using ELE to renew parents in Medicaid under Section 1115 waiver authority. 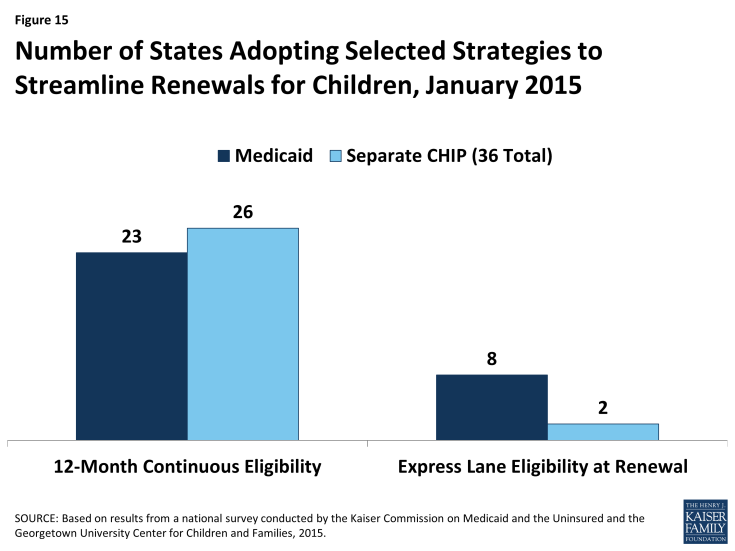