In 2018, beneficiaries across the country continue to have a substantial number of Part D plan choices. 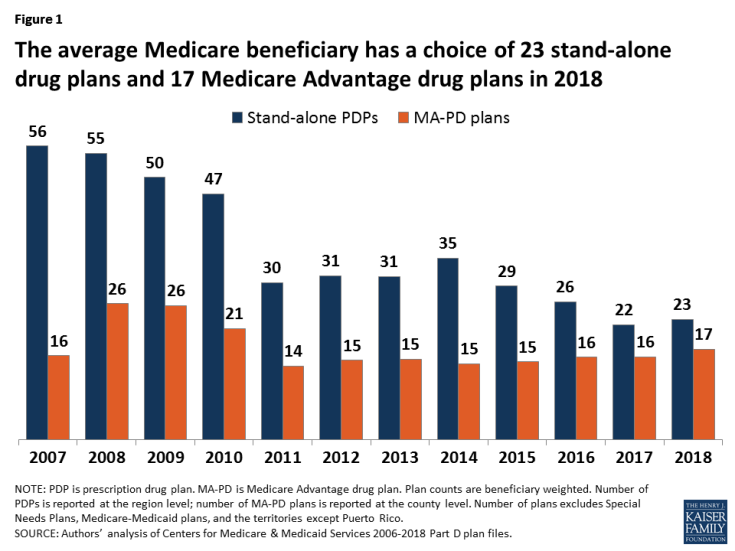 Figure 1: The average Medicare beneficiary has a choice of 23 stand-alone drug plans and 17 Medicare Advantage drug plans in 2018 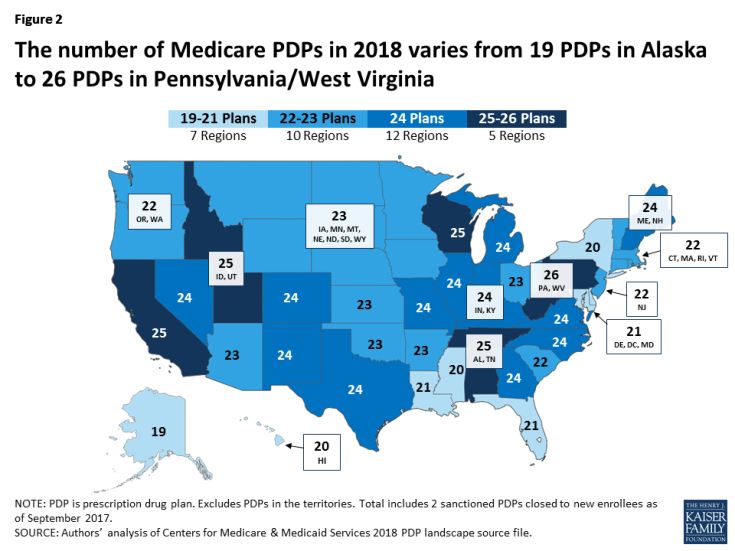 Figure 2: The number of Medicare PDPs in 2018 varies from 19 PDPs in Alaska to 26 PDPs in Pennsylvania/West Virginia 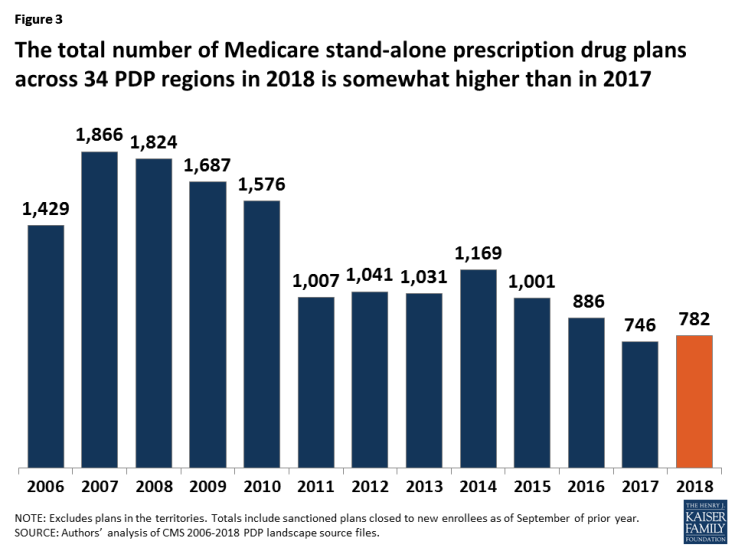 Figure 3: The total number of Medicare stand-alone prescription drug plans across 34 PDP regions in 2018 is somewhat higher than in 2017

The national average monthly PDP premium is expected to increase for the third year in a row—by 9 percent for 2018—based on current enrollment and assuming enrollees do not change plans. Even if a number of beneficiaries switch or are reassigned to lower-premium plans for 2018, the average premium is likely to be higher in 2018 than in 2017, and the three-year increase over the 2015 average premium will mark a significant shift upward. 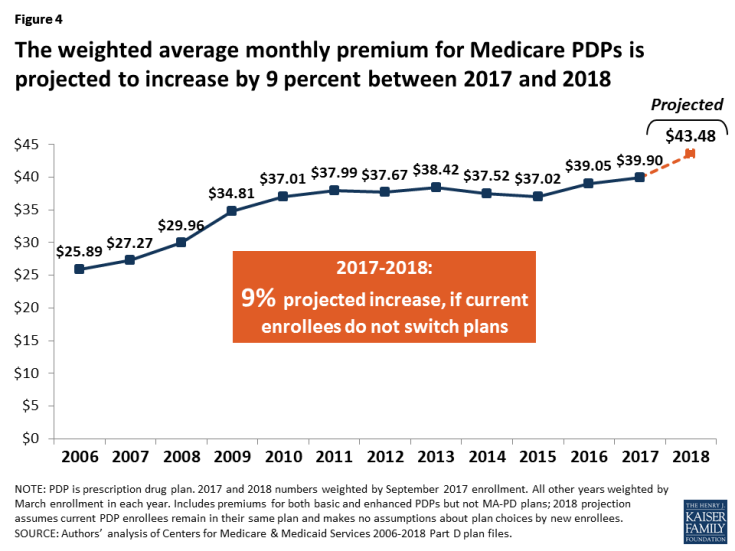 Figure 4: The weighted average monthly premium for Medicare PDPs is projected to increase by 9 percent between 2017 and 2018 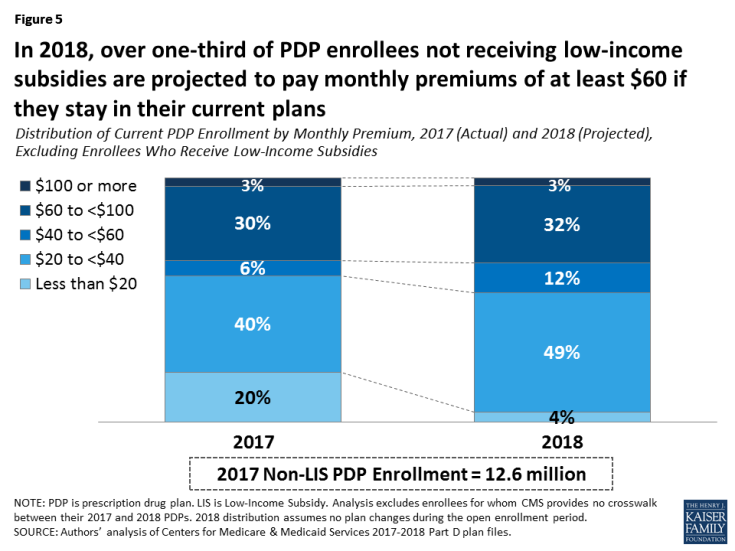 Figure 5: In 2018, over one-third of PDP enrollees not receiving low-income subsidies are projected to pay monthly premiums of at least $60 if they stay in their current plans

PDP premiums will continue to vary widely by plan in 2018, as in previous years. 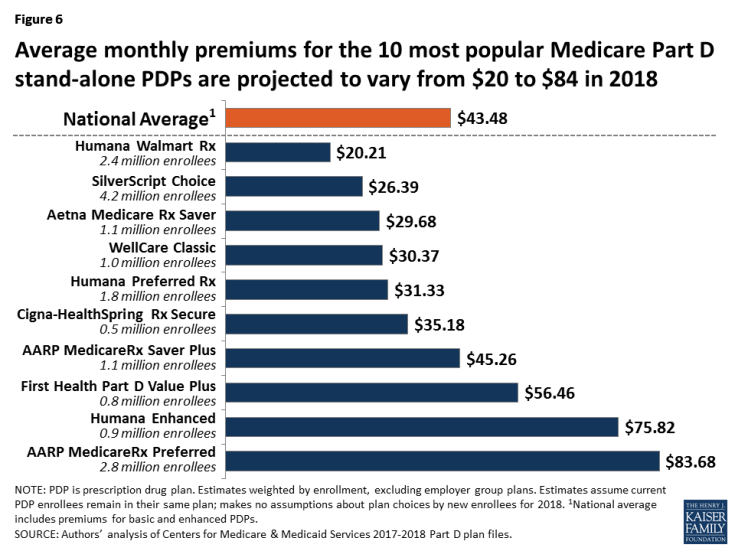 Figure 6: Average monthly premiums for the 10 most popular Medicare Part D stand-alone PDPs are projected to vary from $20 to $84 in 2018

Changes to premiums from 2017 to 2018, averaged across regions and weighted by 2017 enrollment, also vary widely across some of the most popular PDPs, as do the absolute amounts of monthly premiums for 2018  (Table 1). 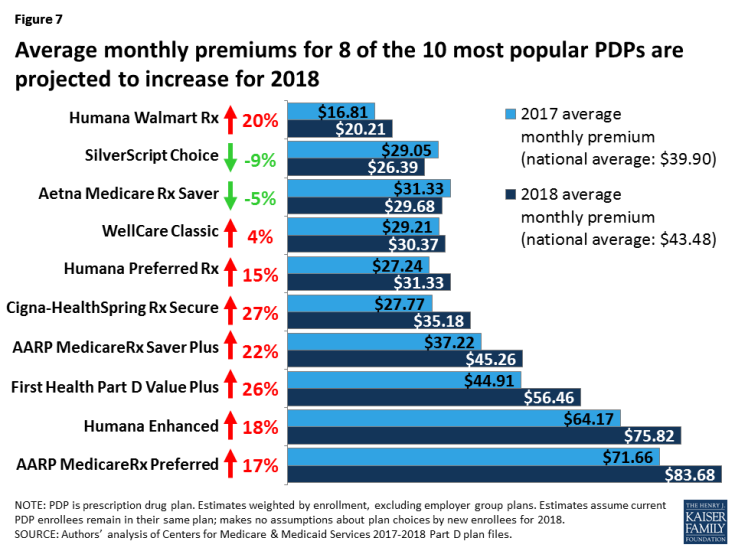 Figure 7: Average monthly premiums for 8 of the 10 most popular PDPs are projected to increase for 2018

Monthly premiums for the three most popular PDPs available since the start of the Part D program in 2006 have changed in substantially different ways. Whereas one of the oldest PDPs is projected to have a lower premium in 2018 than in 2006, the other two PDPs have raised premiums repeatedly.

Average PDP monthly premiums, weighted by 2017 enrollment, will vary in 2018 across regions, along with the change in premiums from 2017 to 2018. 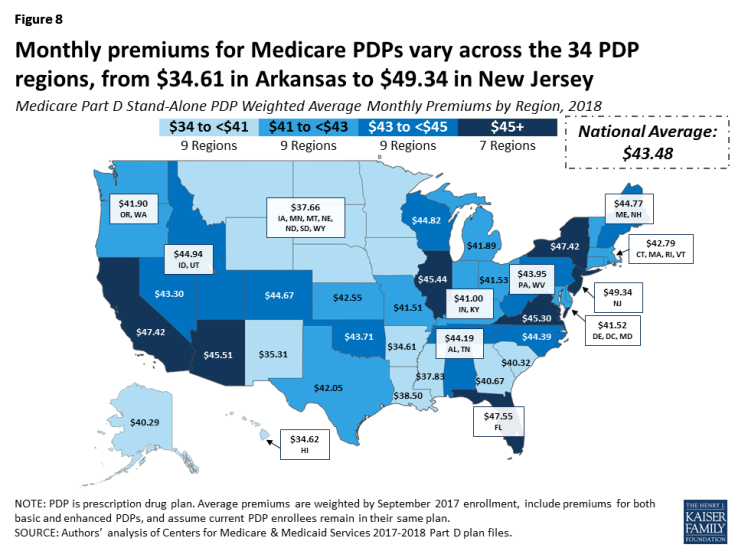 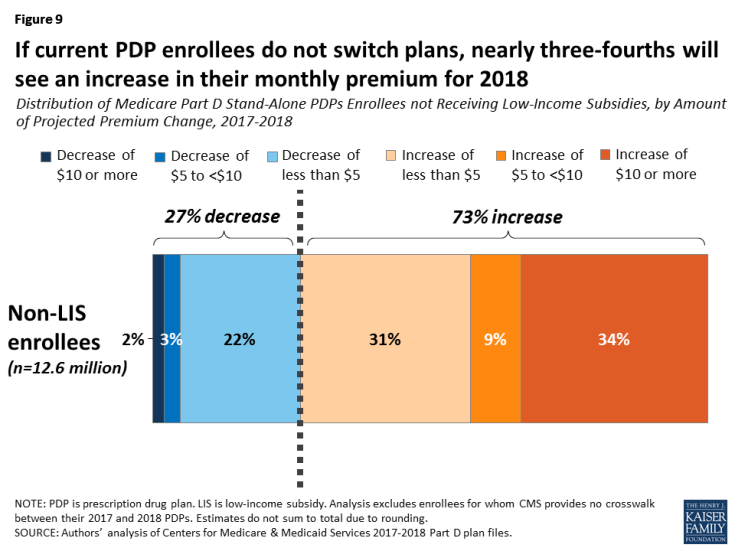 Figure 9: If current PDP enrollees do not switch plans, nearly three-fourths will see an increase in their monthly premium for 2018

In 2018, for the third year in a row, all Part D PDPs will offer an alternative benefit design to the defined standard benefit, which has a $405 deductible in 2018 and 25 percent coinsurance for all covered drugs. Some plans modify or eliminate the deductible, and virtually all PDPs will have a benefit design with five tiers for covered generic and brand-name drugs.

Part D plans must offer either the defined standard benefit or an alternative equal in value (“actuarially equivalent”), which is the basic Part D benefit, and can also provide enhanced benefits. 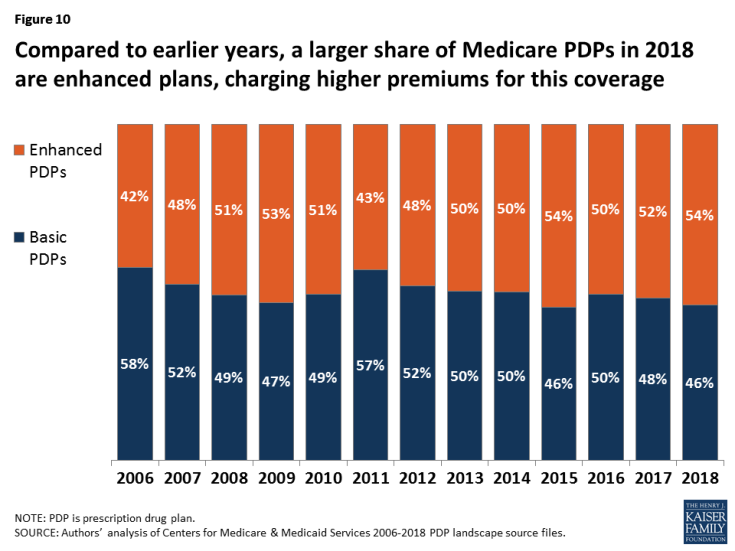 Figure 10: Compared to earlier years, a larger share of Medicare PDPs in 2018 are enhanced plans, charging higher premiums for this coverage

The standard (maximum) Part D deductible is increasing by a modest $5 in 2018 from $400 to $405, compared to a $40 increase between 2016 and 2017 (from $360 to $400). The increase results from a statutory formula that adjusts the amount each year based on the annual percentage increase in average per capita aggregate expenditures for covered Part D drugs, and prior year revisions. For 2018, the annual percentage increase was 1.22 percent. Other amounts for the standard benefit design parameters are increasing by this percentage as well (Appendix 2). 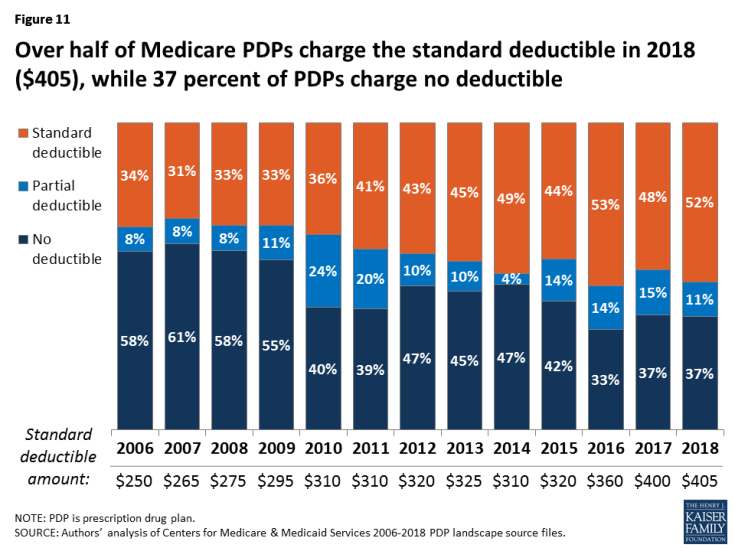 Figure 11: Over half of Medicare PDPs charge the standard deductible in 2018 ($405), while 37 percent of PDPs charge no deductible 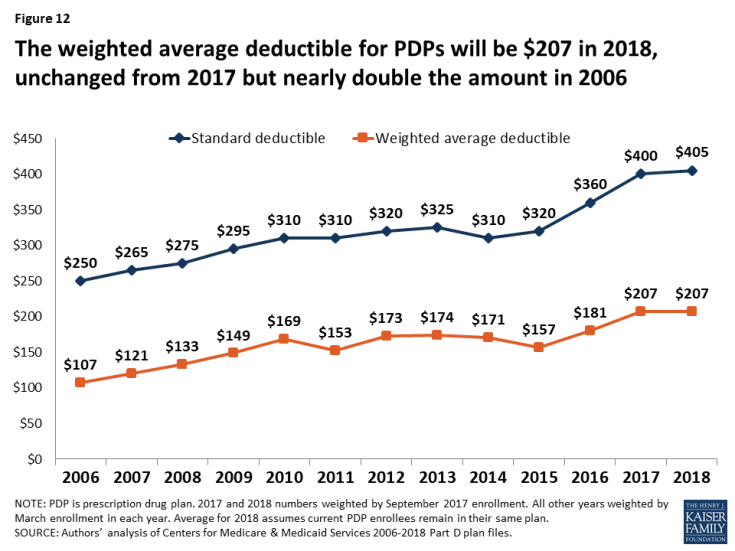 Tiered Cost Sharing in PDPs with the Most Enrollees

In 2018, most Part D plans will offer no gap coverage beyond what is required under the basic benefit; because of the Affordable Care Act provision to gradually close the gap by 2020, all enrollees will have substantial coverage in the gap regardless of which plan they are enrolled in. Under the basic benefit, in 2018, manufacturer prices for brand-name drugs purchased in the gap phase of the benefit will be discounted by 50 percent, with plans paying an additional 15 percent of the cost and enrollees responsible for 35 percent. Plans will pay 56 percent of the cost for generic drugs in the gap phase, with enrollees paying 44 percent. 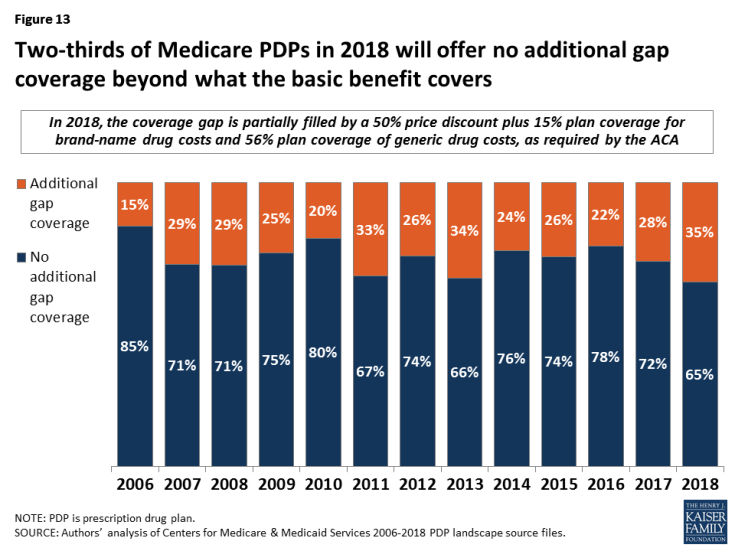 Figure 13: Two-thirds of Medicare PDPs in 2018 will offer no additional gap coverage beyond what the basic benefit covers

In 2018, the total number of premium-free benchmark plans—that is, PDPs available for no monthly premium to Low-Income Subsidy (LIS) enrollees—will be lower than in 2017 and the lowest level since the program started in 2006 (Figure 14; Appendix 1, Table A3). 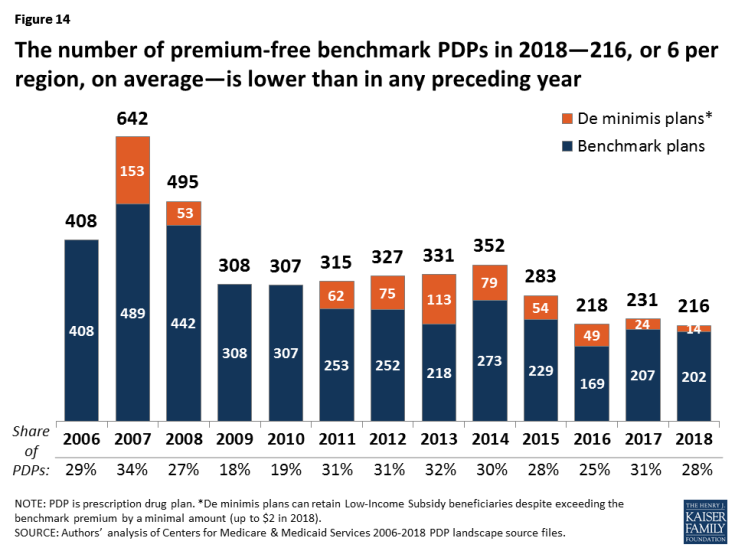 Figure 14: The number of premium-free benchmark PDPs in 2018—216, or 6 per region, on average—is lower than in any preceding year 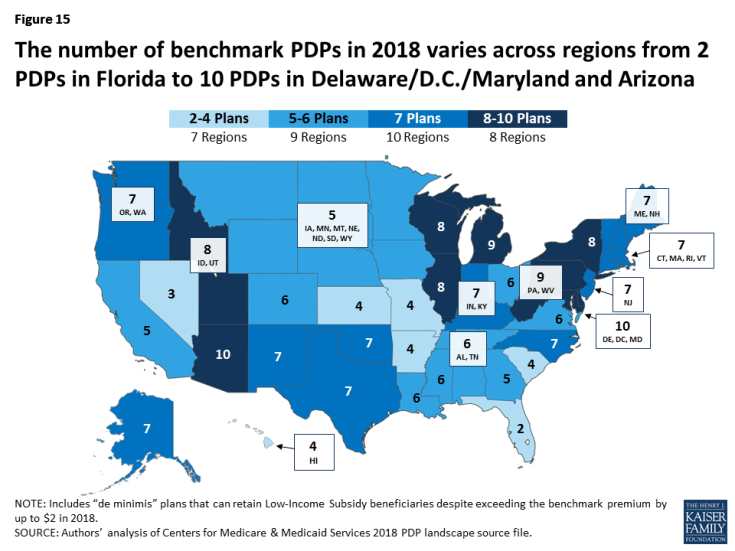 Figure 15: The number of benchmark PDPs in 2018 varies across regions from 2 PDPs in Florida to 10 PDPs in Delaware/D.C./Maryland and Arizona

The number of premium-free plans for LIS enrollees offered by the three largest Part D sponsors (based on total enrollment)—CVS Health/SilverScript, Humana, and UnitedHealth—has fluctuated substantially over the years (Figure 16). 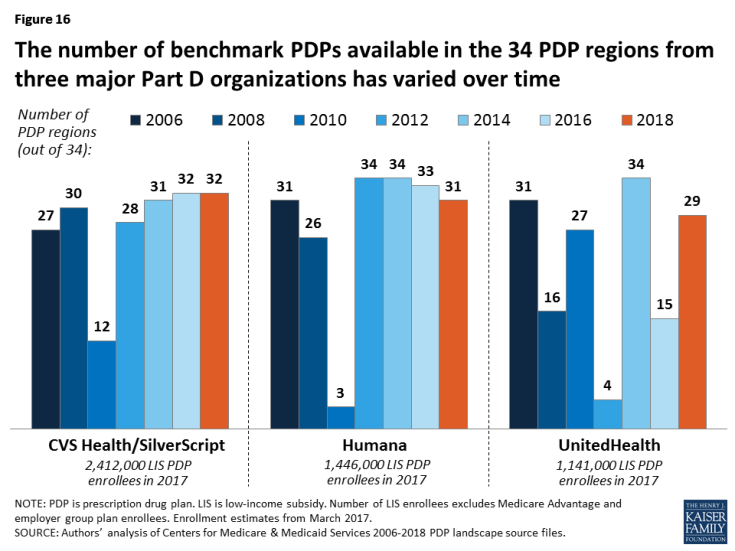 Figure 16: The number of benchmark PDPs available in the 34 PDP regions from three major Part D organizations has varied over time 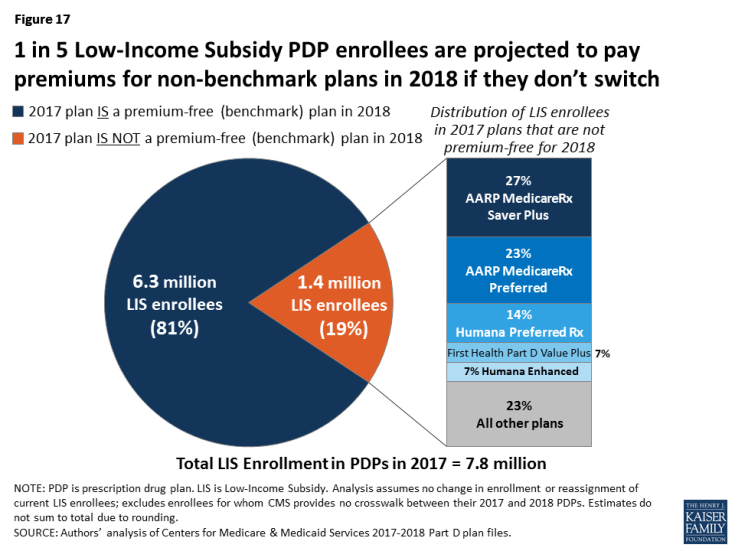 Figure 17: 1 in 5 Low-Income Subsidy PDP enrollees are projected to pay premiums for non-benchmark plans in 2018 if they don’t switch

This analysis of the Medicare Part D PDP landscape for 2018 shows a modest increase in plan availability for 2018, along with wide variation in premiums across plans. Premium variation for plans similar in design could be due to a number of factors related to differences in plan costs and different market strategies across plan sponsors. For example, plan costs are influenced by the generosity in formulary coverage, tier placement and rebates, deductibles and cost-sharing amounts, use of preferred pharmacy networks, the health risk of enrollees, and geographic area. There is some evidence that some of the most popular PDPs that charge lower premiums have relatively narrow formulary coverage compared to PDPs charging higher premiums. Part D sponsors may also launch new PDPs with premiums well below the average, at least initially, in order to attract new or current enrollees to gain market share.

Part D plans vary in numerous ways that can have a significant effect on an enrollee’s out-of-pocket spending, including premiums, cost-sharing requirements, tier placement, the list of covered drugs, and preferred pharmacies. Although beneficiaries may focus on plan premiums as the primary measure of plan cost, an individual’s costs are also affected by the plan’s deductible, cost-sharing amounts, whether their current drugs are on formulary, and which pharmacy they use. A single drug on or off formulary may have a far larger effect on an enrollee’s total costs than the premiums or other plan design features. Some of these plan features are beyond the scope of this analysis, but they are critical for Medicare beneficiaries to consider when evaluating their Part D plan options.

Beneficiaries have the opportunity to compare Part D plans each year during the open enrollment period, and in 2018 will have nearly two dozen plans from which to choose. The open enrollment period presents both opportunities and challenges for Medicare beneficiaries to compare and choose a plan that best meets their individual needs, though prior research shows a relatively small share do so. Finding ways to get more Part D enrollees engaged in comparing and reviewing plans and making changes that could save them money remains an ongoing challenge for CMS and policymakers. In 2018, some Part D enrollees who retain their current plans may see lower premiums and lower overall costs. But more enrollees will face higher premiums and deductibles if they remain in their current plans, and could also see changes in their plan’s formulary coverage and cost-sharing amounts for their drugs, which could also affect their total out-of-pocket costs. As in prior years, Part D enrollees are likely to benefit from the opportunity to shop during open enrollment.