As of January 2018, 49 states cover children with incomes up to at least 200% FPL ($41,560 per year for a family of three in 2018) through Medicaid and CHIP, including 19 states that cover children with incomes at or above 300% FPL ($62,340 per year for a family of three in 2018) (Figure 6). Only two states (Idaho and North Dakota) limit children’s Medicaid and CHIP eligibility to lower incomes. The median income eligibility limit for children is 255% FPL ($52,989 per year for a family of three in 2018). Across states, the upper Medicaid/CHIP eligibility limit for children ranges from 175% FPL in North Dakota to 405% FPL in New York. Children’s eligibility levels remained stable under the ACA, reflecting its maintenance of effort (MOE) provision that requires states to maintain eligibility levels for children that are at least as high as those in place when the ACA was enacted in 2010. The recent ten-year extension of CHIP continues the MOE. Beginning after October 1, 2019, the MOE will only apply to children in families with incomes at or below 300% FPL (305% FPL after the five percentage point of income disregard), although states can maintain current eligibility above that level and receive federal CHIP matching funds. 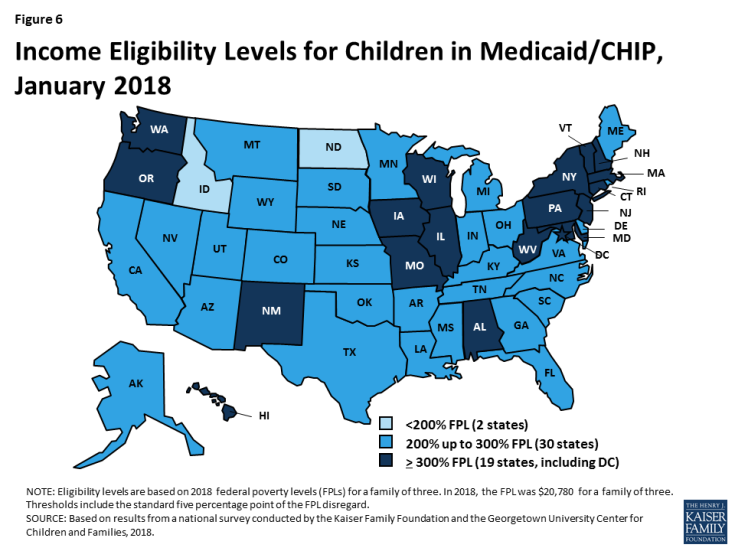 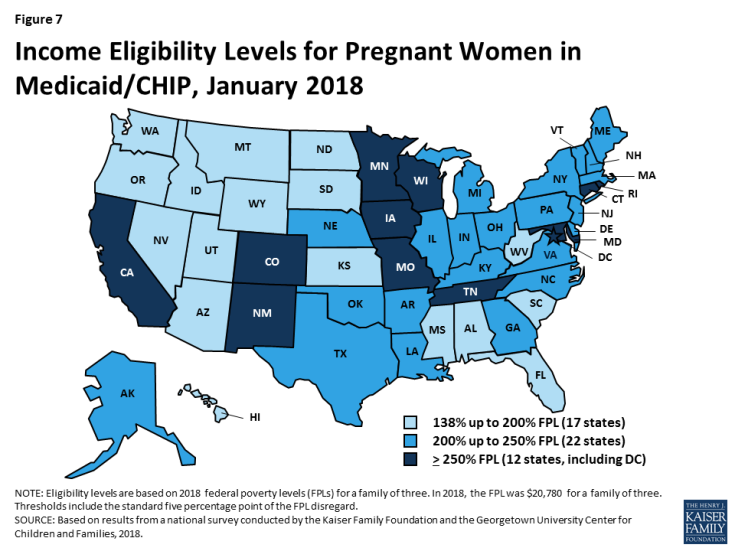 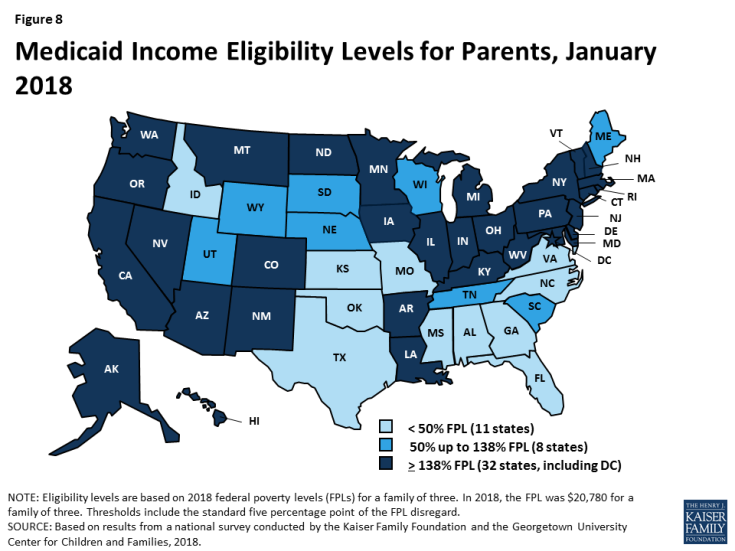 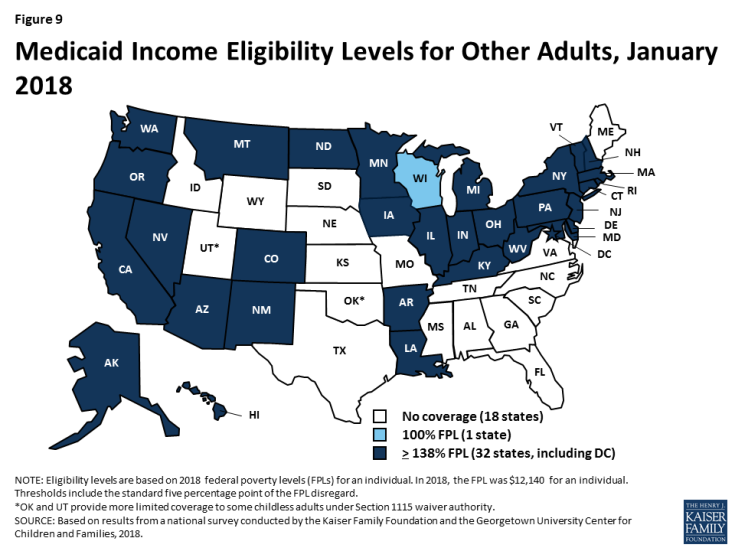 In the 19 states that have not expanded Medicaid, parent eligibility is limited to those with very low incomes and other adults generally remain ineligible, leaving many in a coverage gap. Among non-expansion states, the median eligibility level for parents is 43% FPL ($8,935 per year for a family of three in 2018), and other adults remain ineligible for Medicaid regardless of income, except in Wisconsin. Only Maine and Wisconsin cover parents at or above 100% FPL ($20,780 per year for a family of three in 2018), while 11 states limit parent eligibility to less than half the poverty level (Figure 10). Alabama and Texas have the lowest parent eligibility levels at 18% FPL or $3,740 per year for a family of three in 2018. Given these limited eligibility levels, 2.4 million poor adults fall into a coverage gap in non-expansion states.1 These adults earn too much to qualify for Medicaid but not enough to qualify for subsidies for Marketplace coverage, which become available at 100% FPL. 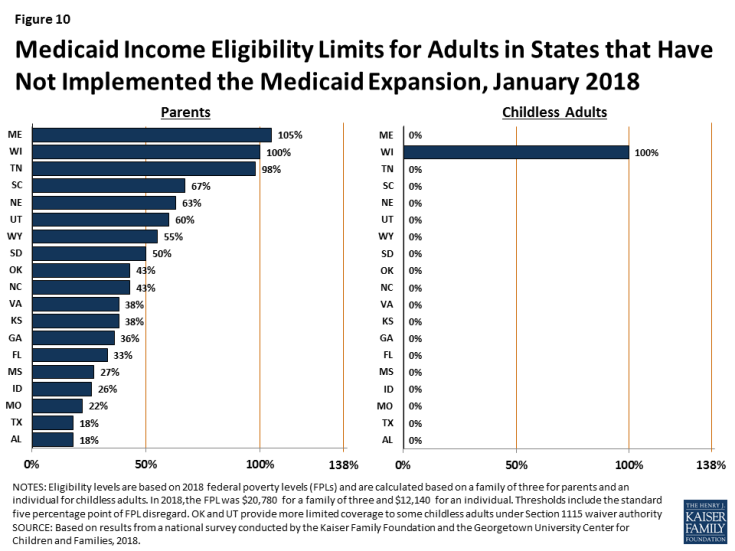 Figure 10: Medicaid Income Eligibility Limits for Adults in States that Have Not Implemented the Medicaid Expansion, January 2018 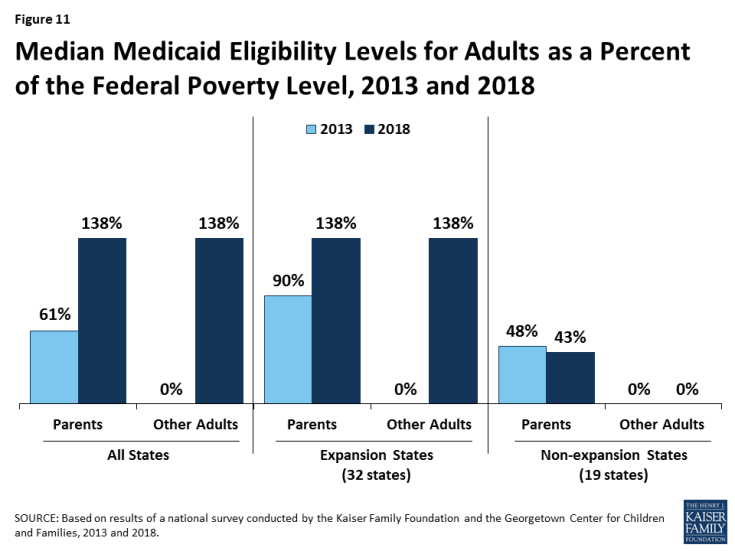 Figure 11: Median Medicaid Eligibility Levels for Adults as a Percent of the Federal Poverty Level, 2013 and 2018

Eligibility levels remained largely stable during 2017. During 2017, Maine adopted the Medicaid expansion through a ballot initiative, but it has not yet been implemented. . In addition, Utah increased parent eligibility from 45% FPL to 60% FPL and obtained a waiver that expanded coverage to a limited number of adults without dependent children with incomes below 5% FPL who have behavioral health needs.2 In contrast, at the direction of the state legislature, Connecticut reduced parent eligibility from 150% FPL to the Medicaid expansion limit of 138% FPL. Outside of these changes, eligibility levels for parents, adults, children, and pregnant women remained stable. 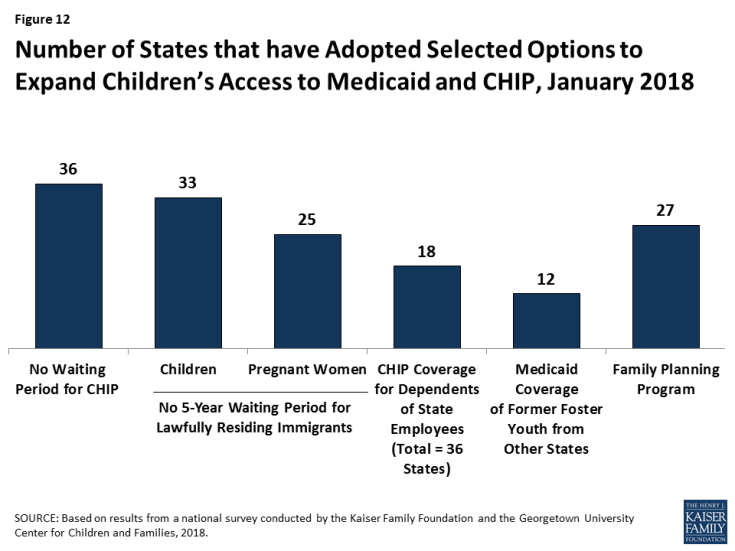 Figure 12: Number of States that have Adopted Selected Options to Expand Children’s Access to Medicaid and CHIP, January 2018

During 2017, a few states continued to adopt targeted options to expand coverage while others discontinued use of certain coverage options. For example, Arkansas and South Carolina took up the option to eliminate the five-year waiting period for lawfully residing immigrant children and pregnant women, Maine began covering dependents of state employees in CHIP, Delaware added coverage for former foster children from other states, and Georgia increased eligibility for its family planning program from 205% FPL to 216% FPL. In contrast, several states phased out coverage of former foster youth from other states (Louisiana, Montana, and New York). Iowa ended its Medicaid family planning program, but is now covering family planning services with state-only funds.