In addition to expanding Medicaid to reach many previously ineligible low-income adults, the ACA established streamlined, modernized enrollment and renewal processes for low-income children and adults across all states (Box 1). The policies and practices standardized by the ACA drew on previous innovations some states pursued that proved effective and efficient for enrolling and retaining eligible children in coverage. Many states needed to make major upgrades to or replace antiquated eligibility systems to implement these new processes. The federal government supported the development of these systems by providing 90% federal match for their development and by only requiring non-health programs to pay the incremental add-on costs to be integrated into the updated Medicaid eligibility systems.

Since the ACA was enacted, states have invested significant time and resources to upgrade or build new eligibility systems and re-engineer their business processes. As outlined in the findings below, with these efforts, the Medicaid enrollment and renewal experience has moved from a paper-based, manual process that could take days and weeks in some states to a modernized, technology-driven approach that can happen in real-time through electronic data matches to verify eligibility criteria. States use these same methods to automate the renewals without requiring enrollees to complete forms or submit paperwork when they can verify information through electronic data matches. Five years into implementation, leading states are now using automated processes to verify and renew eligibility for a majority of applicants and enrollees.

In 2017, states continued to advance enrollment and renewal processes but also focused attention and resources on other priorities. Some states continued to implement simplifications and enhancements to their processes and systems. Several additional states implemented real-time determinations or automated renewals and a few states reintegrated eligibility determinations for seniors and people with disabilities and non-health programs into their upgraded systems. Many other changes were incremental, such as expanding features of online applications and accounts and increasing the share of applications that receive real-time determinations. This leveling off of continued advancement in part reflects that states have largely achieved improved processes now that they are five years into implementation. However, other policy proposals over the past year, including proposals to repeal the ACA, change the financing and structure of Medicaid, and an extended gap in federal funding for CHIP, may have shifted attention away from the focus on improvements to enrollment and renewal processes.

Individuals can apply for Medicaid online and by phone in nearly all states as of January 2018. To facilitate access to coverage, under the ACA, states must provide multiple application methods for individuals, including online, by phone, by mail, and in person. Prior to the ACA, some states had made progress offering online applications for Medicaid, but only 36 states had online applications that could be completed using an electronic signature, and less than a third of states (17) allowed applicants to apply over the phone (Figure 13). As of January 2018, Tennessee is the only state without an electronic application and telephone applications are available in 49 states. 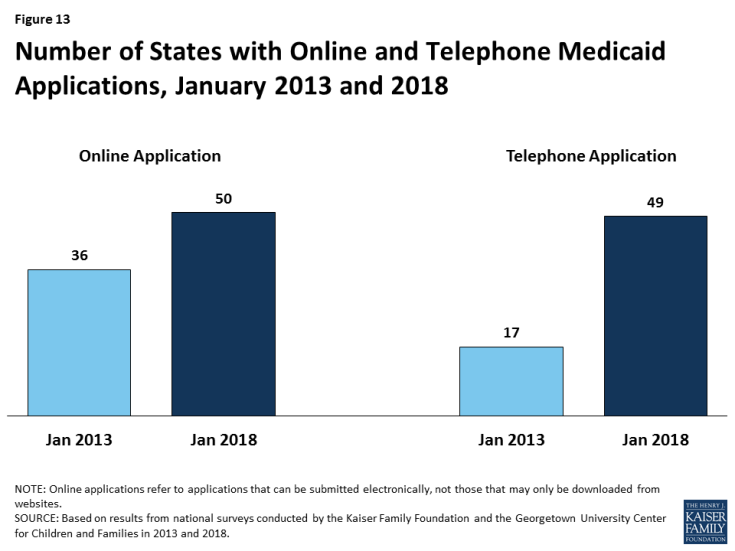 Figure 13: Number of States with Online and Telephone Medicaid Applications, January 2013 and 2018

States have expanded consumer friendly features of online applications over time. In all 50 states with an online application, applicants can start, stop, and return to finish the application at a later time (Figure 14). In addition, states have increasingly added the ability for individuals to upload electronic copies of documentation with their application if needed. Between 2013 and 2018, the number of states with this functionality grew from 15 to 34, including Utah, which added this option in 2017. 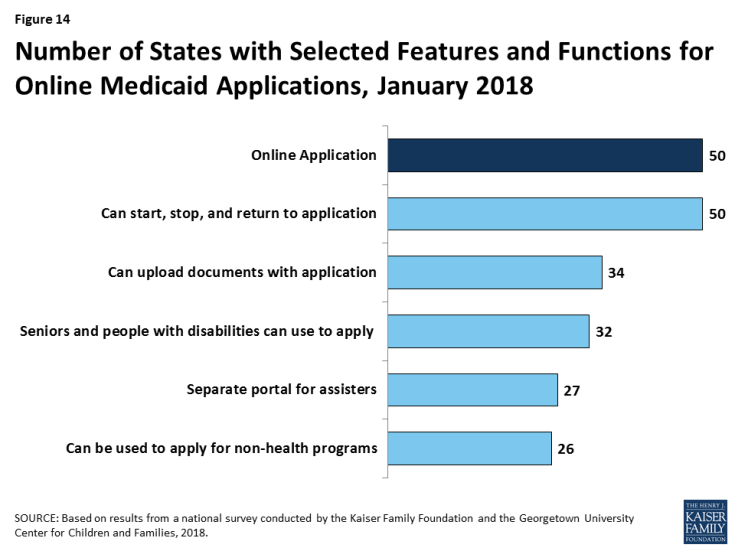 Just over half of the states (27) have a web portal or secure login that enables consumer assisters to submit applications on behalf of consumers they help. In 2017, Utah added a portal for consumer assisters. This functionality helps states track, monitor, and report the work of assisters. In some states, these portals have additional functions or features that support the work of assisters, such as the ability to check a renewal date. Providing assisters with more tools may help reduce workloads on state administrative staff, for example, if assisters are able to update addresses and other information. 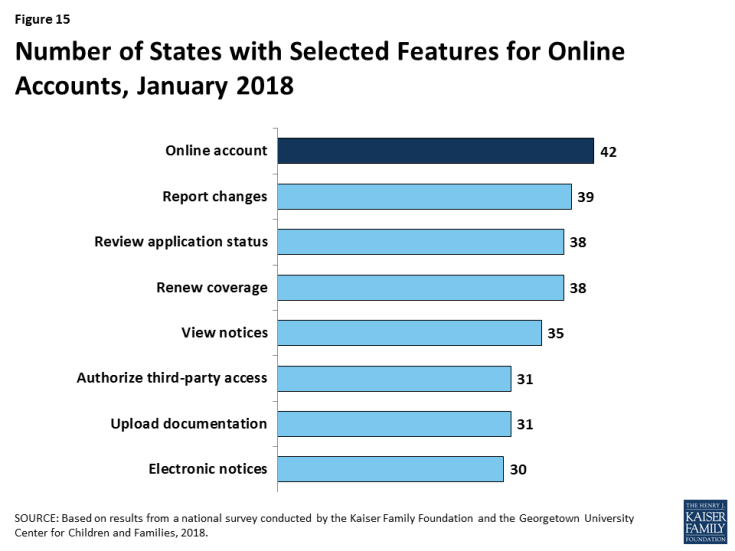 As of January 2018, 40 states are able to make real-time Medicaid eligibility determinations (defined as within 24 hours). This count reflects the addition of Georgia, which began determining eligibility in real-time in 2017. Prior to the ACA, states could verify some information electronically, like Social Security information or dates of birth, but for other aspects of eligibility, particularly income, eligibility workers often had to review paper documents like pay stubs or manually look up information in other data sources. This process often resulted in backlogs of applications, follow-up requests for information, and delays associated with matching up applications with verification documents. Today’s upgraded eligibility systems are able to check against other electronic data sources in real-time or overnight, providing timely eligibility decisions and reducing burdens for both individuals and staff. As state systems and processes have matured, they are able to process an increasing share of applications in real time. As of January 2018, at least 50% of applications receive a real-time determination in 17 of the 38 states that complete real-time determinations and were able to report this data (Figure 16), up from 15 in 2017. This count includes 11 states that report over 75% of applications receive a real-time decision, up from nine states in 2017. 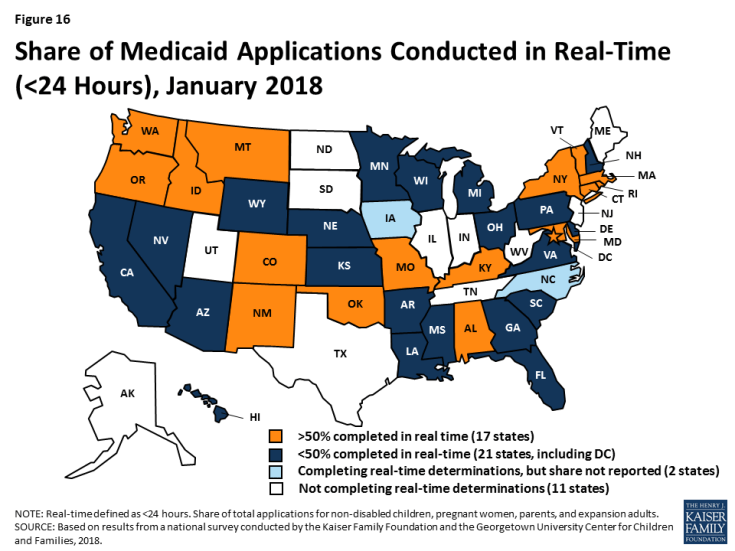 When making Medicaid and CHIP eligibility determinations, all states verify citizenship or qualified immigration status of applicants, as well as income. States must verify citizenship or qualified immigration status for individuals prior to enrollment, although individuals who attest to a qualified status must be given a reasonable amount of time to provide documentation if eligibility cannot be confirmed electronically. States also must verify income. Nearly all states (44 states) verify income prior to enrollment, while seven states complete the verification after enrollment. Verification policies for other eligibility criteria, such as age/date of birth, state residency, and household size, vary across states, reflecting state options to confirm this information before or after enrollment or to accept self-attestation of information. If a state has any data that conflicts with the self-attestation, it must validate the information.

Reflecting ACA provisions for states to coordinate coverage across insurance affordability programs, all states have their Medicaid eligibility system integrated with or connected to CHIP and Marketplace systems. Prior to the ACA, half of states with separate CHIP programs (16 of 38) had separate eligibility systems for Medicaid and CHIP. As of January 2018, nearly all (34 of the 36) states with a separate CHIP program use a single system for Medicaid and CHIP. States’ integration and coordination with Marketplace systems varies reflecting differences in Marketplace structure (Figure 17). Most states with State-based Marketplaces (SBMs) (12 of 17) use the same system for Medicaid and Marketplace coverage. The other five SBM states rely on the Federally-Facilitated Marketplace’s (FFM’s) technology platform (Healthcare.gov) for Marketplace coverage, as do the remaining 34 FFM states. States using Healthcare.gov must electronically transfer data with the FFM to coordinate Medicaid and Marketplace coverage. Nine of these states have authorized the FFM to make final Medicaid eligibility determinations and enroll individuals in Medicaid immediately after receiving data from the FFM. In the other 30 states, the FFM preliminarily assesses Medicaid or CHIP eligibility and then the state may check state data sources or request additional documentation before completing the eligibility determination. When the ACA was first implemented, there were significant problems with account transfers that contributed to delays in Medicaid or CHIP enrollment. As of January 2018, only two states report ongoing, regular delays or difficulties with transfers. 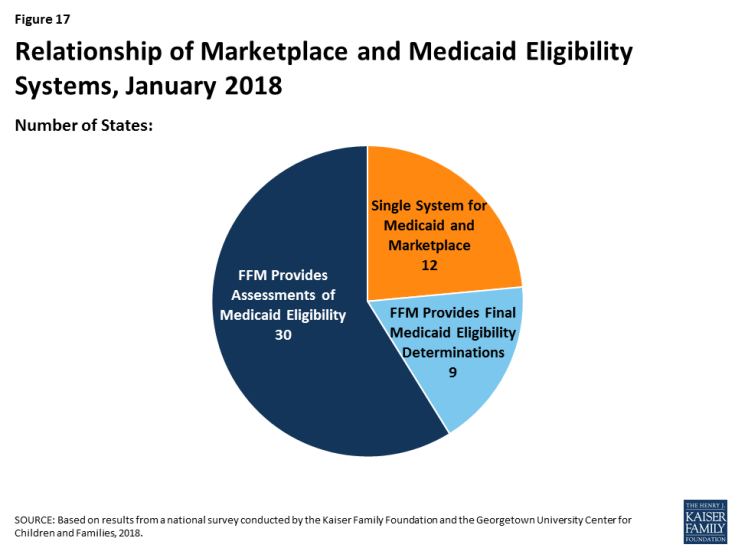 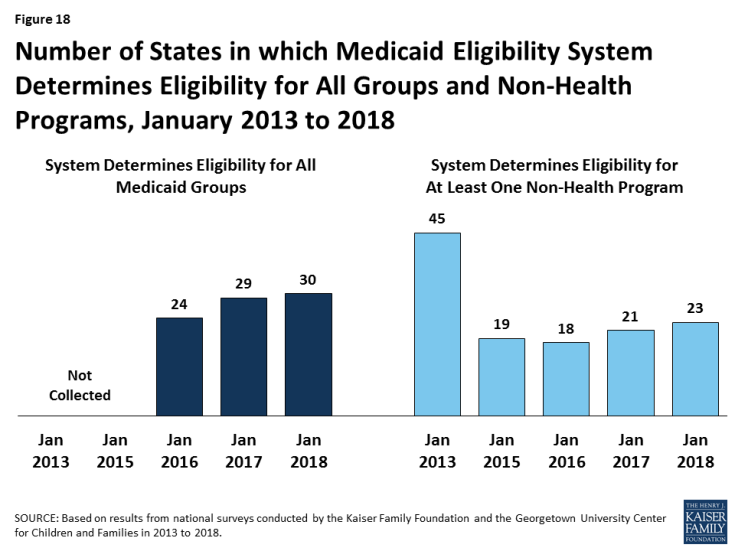 Figure 18: Number of States in which Medicaid Eligibility System Determines Eligibility for All Groups and Non-Health Programs, January 2013 to 2018

As of January 2018, 46 states use electronic data matches to automatically renew coverage in Medicaid and CHIP without requiring enrollees to submit paperwork. This reflects the implementation of automated renewals in four states (Illinois, Iowa, Oregon, and Wisconsin) during 2017. Similar to data-driven enrollment under the ACA, states are using electronic data matches to renew coverage when possible without requiring an individual to fill out a renewal form or provide documentation. This approach minimizes paperwork for individuals and reduces workloads for states. As of January 2018, among the 42 states completing automated renewals and able to report the share of renewals completed through automatic processes, 21 states reported that more than 50% of renewals are completed automatically, up from 19 in 2017 (Figure 19). This includes seven states that complete more than 75% of renewals automatically. Continued state progress in conducting automated renewals has enabled states to largely resolve backlogs or delays in renewals. 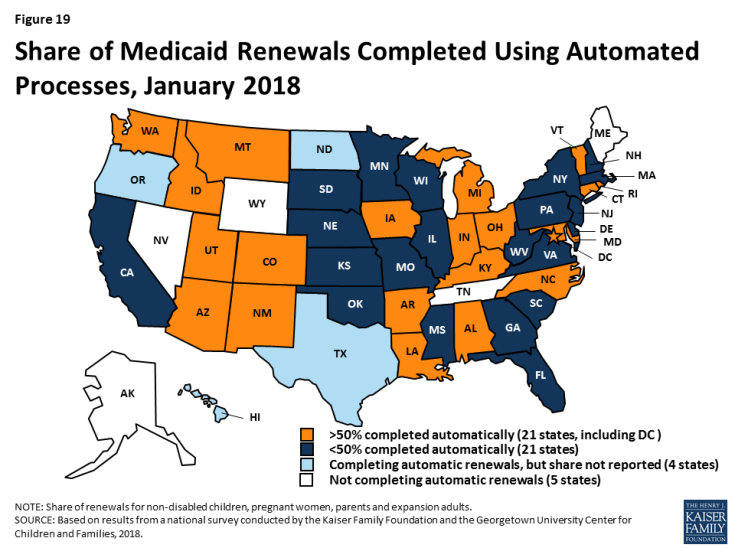 Forty-five states use prepopulated forms to facilitate renewal when a state is not able to complete an automatic renewal through electronic data sources (Figure 20). In 14 states, the state populates the form with updated sources of data from electronic data matches. In cases where the automatic renewal process is unable to affirm ongoing eligibility, 41 states allow individuals to renew by phone, compared to 24 states that offered telephone renewals in 2013. 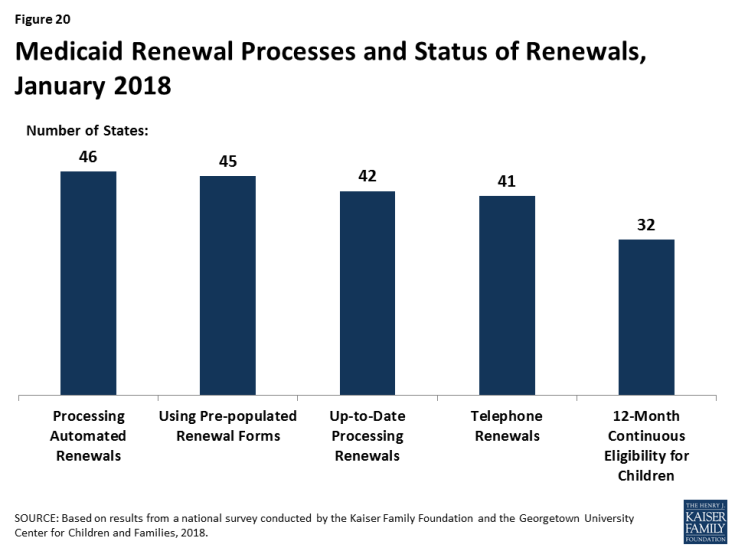