Coverage for children and pregnant women will likely remain strong, bolstered by a ten-year extension in federal funding for CHIP. At the end of September 2017, federal funding for CHIP ended beginning a four-month lapse in federal funding before Congress passed legislation that extended federal funding for ten years. The extension in federal funding enables states to maintain coverage for children and pregnant women and continues the ACA MOE provision that requires states to maintain Medicaid and CHIP eligibility levels for children through 2027. After October 1, 2019, the MOE will only apply to children in families with incomes at or below 300% FPL (305% FPL after accounting for the five percentage point income disregard). The 14 states that have CHIP eligibility above 305% FPL can maintain higher eligibility levels and receive federal CHIP matching funds, but they could reduce eligibility to 305% FPL at that time or later. The legislation continues the 23 percentage point enhanced federal match rate for CHIP established by the ACA through 2019 to give states time to plan for a phase down to the regular CHIP matching rate in 2021.

Proposals to make significant changes to Medicaid’s structure and financing are likely to continue to be debated. While proposals to cap and limit Medicaid financing stalled in 2017, proposals to restructure Medicaid and reduce federal spending are likely to reemerge. The President’s FY2019 budget proposes reductions to Medicaid and some Congressional leaders continue to express interest in reducing spending on entitlement programs, including Medicaid and Medicare. Changes to the financing and structure of Medicaid would have significant implications for the coverage gains achieved for children and adults to date. Moreover, uncertainty around the future of the program could limit state interest in continuing efforts to expand coverage and improve enrollment and renewal processes.

Waivers and other proposed changes require complex documentation and administrative processes for adults that run counter to simplified enrollment and renewal and increase costs for individuals (Figure 24). Recently approved and proposed Section 1115 waivers include new restrictions and requirements for adults such as work requirements, premiums, increased cost sharing, time limits on coverage, drug screening and testing requirements, asset tests, more frequent redeterminations, waivers of reasonable promptness and retroactive eligibility, and lockouts for failure to pay premiums or provide timely information about changes in circumstances or for renewal. To date, CMS has approved certain eligibility and enrollment restrictions as part of ACA Medicaid expansion waivers; in some cases, provisions also apply to other groups, including very low-income parents eligible through traditional eligibility pathways. Many of these provisions had not yet been implemented as of January 2018, although waivers of retroactive eligibility and reasonable promptness and higher premiums had been implemented in some states. In addition, the President’s FY2019 budget proposes to allow states once again to require individuals to meet an asset test and to provide documentation to verify citizenship and immigration status before receipt of Medicaid, although states already must verify citizenship and immigration status under current law. These provisions run counter to the streamlined processes states have put in place under the ACA. Research and previous state experience shows that such changes would likely create barriers for eligible individuals to obtain and maintain coverage and access needed care. They also will be complex and costly for states to implement. 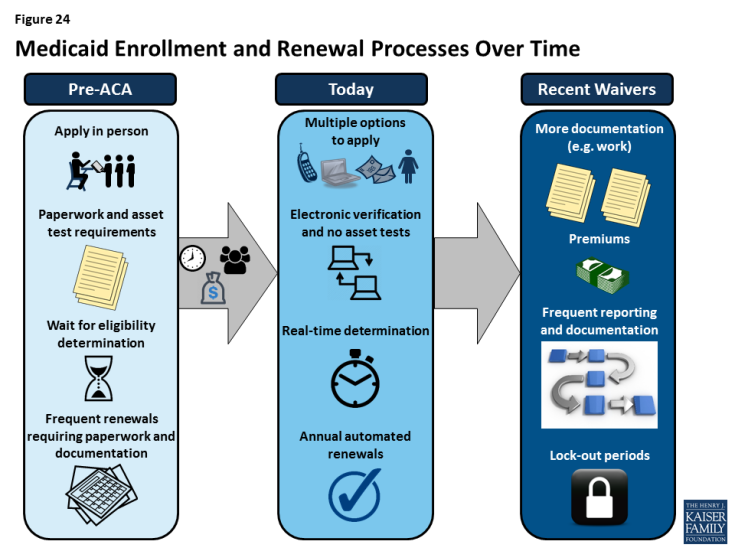 Taken together, the survey data show that Medicaid and CHIP continue to provide a strong base of coverage for our nation’s low-income children and pregnant women. There have been significant gains in eligibility for parents and other adults under the ACA Medicaid expansion, but gaps in coverage remain in states that have not implemented the expansion. Through major investments of time and resources, states have largely realized modernized, streamlined enrollment and renewal processes as outlined in the ACA, which have made the processes more consumer-friendly for individuals and reduced administrative burdens for states. In 2017, some states continued to take up targeted expansions in coverage and improvements to enrollment and renewal processes, although there was some leveling off of continued advancement and states focused attention on other priorities. Looking ahead, coverage for children and pregnant women will remain strong, bolstered by a ten-year extension in federal funding for CHIP. Opportunity remains for states to expand eligibility for parents and other adults by implementing the Medicaid expansion. States may continue to refine and enhance enrollment and renewal processes, but some states are seeking to include new requirements and restrictions for adults that require complex documentation and administrative processes, which would likely create barriers for eligible individuals to obtain and maintain coverage and access needed care.