On January 23, 2017, President Trump reinstated the Mexico City Policy (MCP), renamed “Protecting Life in Global Health Assistance” (see the KFF explainer). In the past, when in effect, the policy required foreign non-governmental organizations (NGOs)1 to certify that they would not “perform or actively promote abortion as a method of family planning” using funds from any source (including non-U.S. funds) as a condition for receiving U.S. government global family planning assistance. This included both foreign NGOs receiving U.S. funding directly, as “prime recipients,”2 or indirectly, as “sub-recipients.”3 Furthermore, it required U.S. NGOs to ensure that any foreign NGO sub-recipients were in compliance. Under the Trump Administration, the policy’s scope has been significantly expanded beyond these conditions. It now includes most other U.S. bilateral global health assistance and, pending the outcome of a rule-making process, additional funding agreements (in the past, it applied to cooperative agreements and grants;4 the Administration intends to also apply it to contracts).5 As such, the policy applies to more than $7 billion, to the extent that such funding is ultimately provided to foreign NGOs, directly or indirectly.

At this time, many questions remain about the potential impact of the expanded policy. One key unknown is the size of the universe of affected NGOs. We undertook this analysis to begin to answer that question. Using ForeignAssistance.gov data obtained from USAID,6 we identified NGO prime recipients of U.S. global health assistance in the most recent three-year period for which such data were available (FY 2013- FY 2015).7 We categorized them into U.S. and foreign NGOs. We included bilateral global health funding obligated by USAID (including funding that had been transferred to USAID from the Department of State) through grants, cooperative agreements, and contracts (contracts were included even though the rule-making process has not yet been initiated8) that would have been subject to the MCP. We then analyzed data from USAspending.gov to identify NGO sub-recipients of the top NGO prime recipients of U.S. global health assistance over the same period.9 This allowed us to create a database of foreign NGOs that would have been subject to the expanded MCP if the policy had been in effect during that three-year period, as well as U.S. NGOs that would have been required to ensure that their foreign NGO sub-recipients were in compliance. We also quantified the effect of expanding the policy beyond its prior conditions on the number of affected NGOs.

Our findings should be considered a minimum estimate since we only looked at sub-recipients of the top prime recipients of funding (and not all prime recipients report sub-recipient data). Indeed, based on a prior analysis we conducted, most U.S. global health assistance flows first to U.S.-based organizations before reaching foreign NGOs.10 In addition, we did not include NGOs that received global health funding transferred from State or other agencies to the Department of Health and Human Services in this analysis (although such funding is subject to the policy11). At the same time, it is important to note that while all foreign NGOs will be required to certify compliance with the MCP as a condition of receiving U.S. global health assistance, only some carry out activities that are prohibited by the policy; however, available data did not allow us to assess this issue. See full methodology in Appendix A.

We found that had the expanded Mexico City Policy been in effect during the FY 2013 – FY 2015 period: 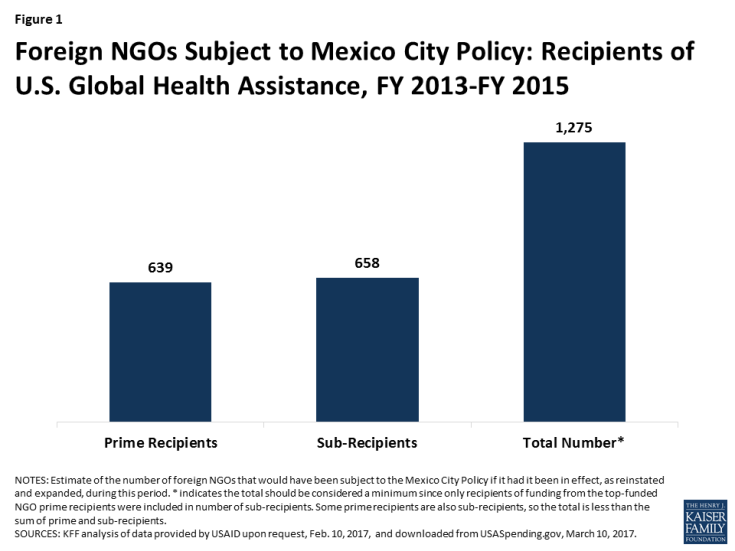 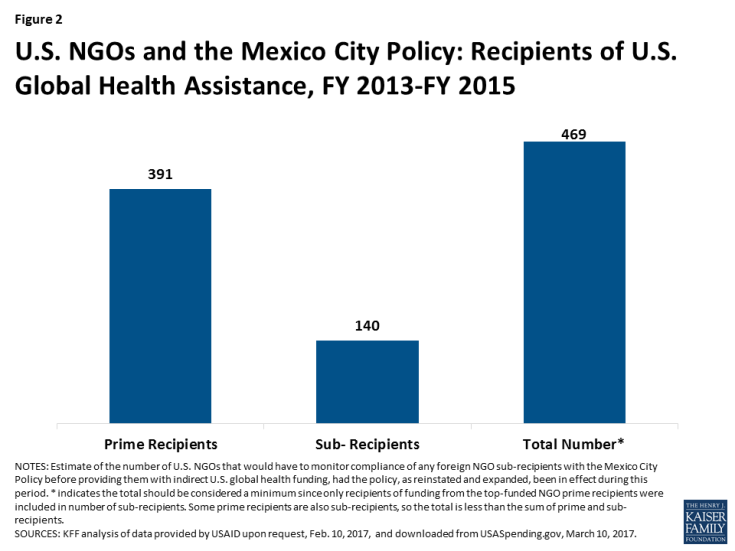 Looking at prime recipients only, we also quantified the effect of expanding the policy beyond its prior conditions on the number of affected NGOs (available data on sub-recipients did not permit this level of analysis). We found that the expansion of the policy beyond family planning assistance and to contracts greatly increased its reach: 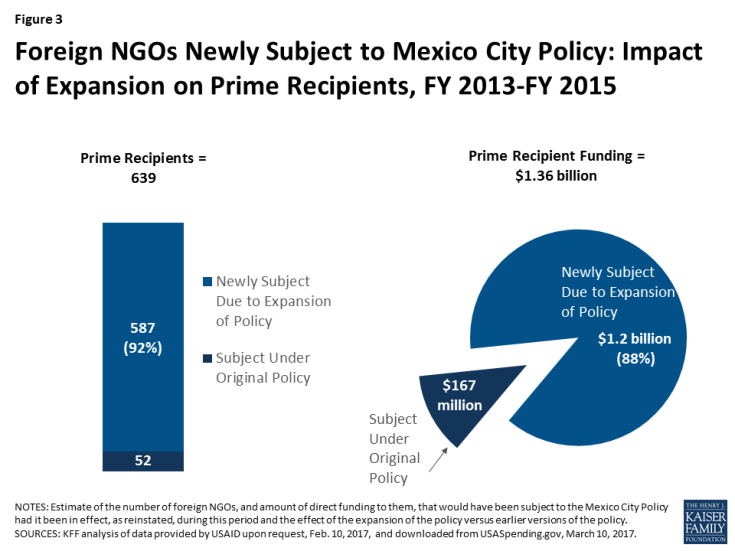 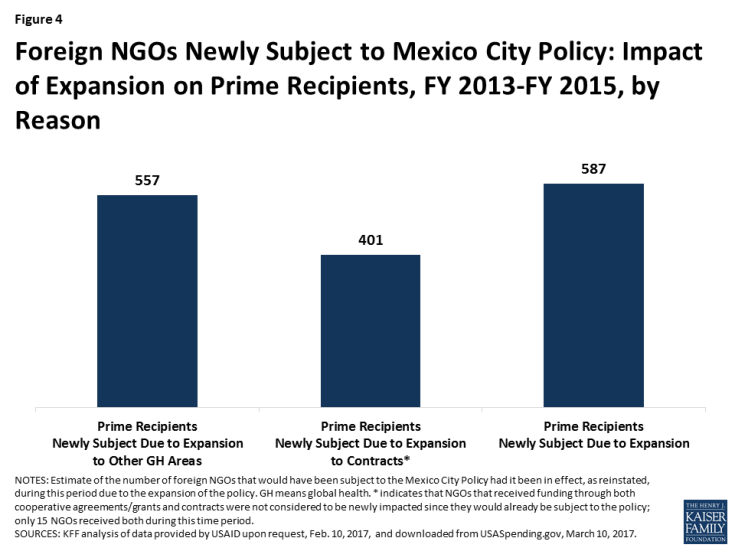 Our analysis finds that the expansion of the Mexico City Policy by the Trump Administration greatly increased its reach, affecting a much greater number of foreign NGOs and funding than prior iterations. This is particularly the case given the Administration’s intent to expand the policy to include contracts, pending the outcome of a rule-making process. Importantly, while our analysis provides an initial estimate of the number of foreign NGOs that would be subject to the policy, it does not represent the entire universe, due to data limitations in identifying sub-recipients of U.S. support. Such an accounting would be important for more fully understanding the scope and impact. Furthermore, this analysis does not assess the extent to which affected NGOs carry out activities prohibited by the policy, some of whom may choose to end such activities or forgo U.S. funding. Ultimately, this next layer of analysis will be critical to assessing the impact of the expanded policy on the people served by U.S. global health programs, as the policy continues to be rolled-out.