Lack of health insurance coverage for millions of people has been a long-standing policy challenge in the United States. Historically, most Americans received health coverage as an employer benefit through a job, but not all workers and their families were covered. Some people purchased coverage on their own, but this “non-group” coverage was costly and could be difficult to obtain. Public coverage provided assistance to many low- and middle-income people, but gaps in eligibility left many without an affordable coverage option. To increase the number of people with access to affordable coverage, the Affordable Care Act (ACA) included several provisions to address these challenges. The major coverage provisions, which went into effect in January 2014, include the expansion of Medicaid in many states and the availability of premium tax credits to purchase coverage through newly-established Health Insurance Marketplaces. These provisions have the potential to improve the availability and affordability of insurance coverage in the United States, with the ultimate goal of helping people access needed health services and reducing the financial burden of medical costs on low- and middle-income families.

While much attention has been paid to enrollment in new coverage options and changes in the number of uninsured since coverage provisions went into effect, less is known about how this coverage has affected people’s lives. To help understand the early impact of the ACA, the Kaiser Family Foundation is conducting a series of comprehensive surveys of the low- and moderate-income population. The 2013 Kaiser Survey of Low-Income Americans and the ACA, fielded prior to the start of open enrollment for 2014 ACA coverage, provided a baseline snapshot of health insurance coverage, health care use and barriers to care, and financial security among insured and uninsured adults at the starting line of ACA implementation.1 In Fall 2014, we conducted a second wave of the Kaiser Survey of Low-Income Americans and the ACA to understand how these factors have changed under the first year of the law’s main coverage provisions. The survey of 10,502 nonelderly adults was fielded between September 2 and December 15, 2014, with the majority of interviews (70%) conducted prior to November 15, 2014 (the start of open enrollment for 2015 Marketplace coverage; Medicaid enrollment is open throughout the year). Questions asked about coverage in 2014, costs and scope of coverage, access to health care services, and affordability and family budgets. Additional detail on the survey methods is available in the methods appendix available online.

Based on the survey findings, approximately 11 million nonelderly adults were newly insured in 2014, meaning they reported that they obtained health coverage in 2014 and were uninsured before that coverage started. While the ACA was leading to major changes in health insurance coverage in 2014, these changes were occurring against the backdrop of the normal cycles of health coverage that people experience as their employment and income circumstances change. Therefore, though most people who report gaining coverage in 2014 did so through one of the pathways in place under the ACA (Figure 1), some people gained other coverage such as employer coverage. In addition, some people who were insured before 2014 also enrolled in ACA coverage options. For example, some people who were purchasing coverage on their own instead purchased that coverage through the new Marketplaces, and some people who lost coverage and were low- and middle-income took up Medicaid. 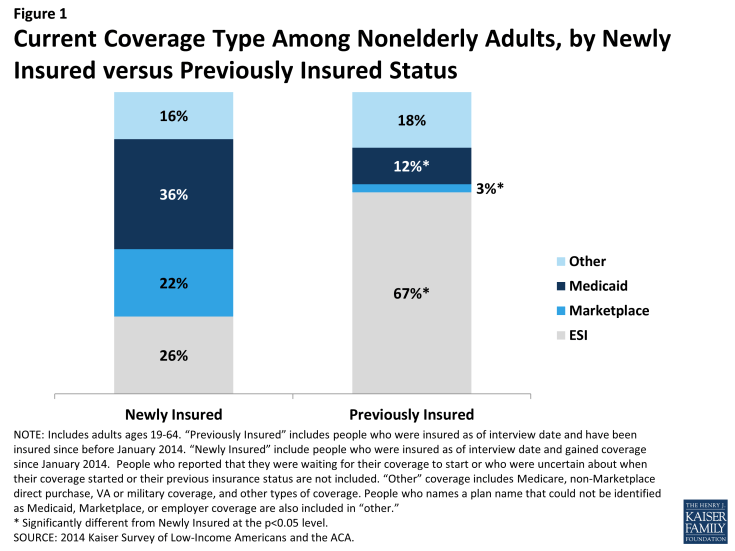 Under the ACA, most people can only purchase Marketplace coverage during “open enrollment.” For coverage that started in 2014, open enrollment was between October 2013 and the end of March 2014; however, due to website glitches, people who started an application before March 31, 2014 were allowed to enroll through April 2014. In addition, “special enrollment periods” may be available for those undergoing certain life events (such as having a baby, getting married, or moving to a new state). Medicaid enrollment is open throughout the year, and enrollment in job-based coverage is generally timed to start of a job or fall open enrollment periods if the employer offers a choice of plans. While many (40%) newly insured adults gained their coverage in the first quarter of 2014, most gained it after March 2014. Not surprisingly, given enrollment periods, newly insured Marketplace enrollees were most likely to gain coverage in the first quarter, whereas newly-insured adults with Medicaid or employer coverage were more likely to gain coverage throughout the year (Figure 2). 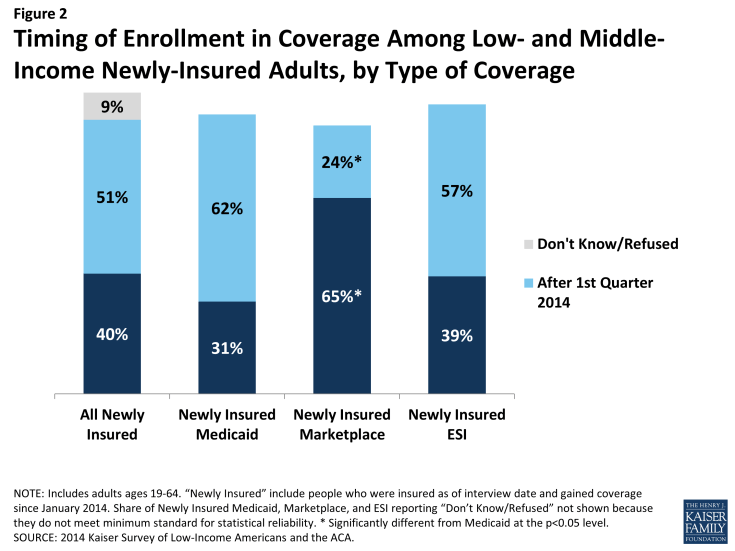 Figure 2: Timing of Enrollment in Coverage Among Low- and Middle-Income Newly-Insured Adults, by Type of Coverage

The vast majority of adults who gained coverage in 2014 have family income below 400% of poverty, the income range for financial assistance under the ACA. More than half (53%) of adults who gained coverage in 2014 have family income at or below 138% of poverty, or about $27,300 for a family of three, and more than one in four (42%) has family incomes in the range for tax credits (139 to 400% of poverty). This income profile is not significantly different than that for the remaining uninsured population. However, the newly insured population is significantly more likely than the previously insured to be low- and middle-income and significantly less likely to be higher income (greater than 400% of poverty). This pattern reflects the longstanding association between being low income and lacking insurance coverage.

This report aims to understand the impact that gaining coverage has had on the lives of low- and middle-income “newly insured” adults. Based on the 2014 Kaiser Survey of Low-Income Americans and the ACA, it describes who was newly insured as of Fall 2014 and compares this population to their uninsured and previously insured counterparts (see text box below for definitions of these terms); provides information on how the newly insured view their coverage and any problems they have encountered, and examines how the newly insured fare with respect to access to medical care and financial burden. Because adults who were previously insured were more likely to be higher income, and because income is associated with many of the outcomes of interest, the analysis in this brief is restricted to only the population below 400% of poverty, who we call “low- and middle-income adults.” This approach enables us to compare the newly insured to the uninsured and previously insured with a similar income profile. Because timing of coverage may also affect some of the outcomes of interest, we also conducted sensitivity analysis to examine whether patterns among the newly insured differed by timing of coverage and, where relevant, report those as well.