Non-governmental organizations (NGOs) are key partners in U.S. global health efforts. The recent Kaiser report NGO Engagement in U.S. Global Health Efforts: Analysis of U.S.-Based NGOs Receiving USG Support Through USAID shed light on the role played by U.S.-based NGOs. It found that in FY 2013, the U.S. government (USG) channeled a significant share of funding for global health to U.S.-based NGOs, who often act as program implementers and conduct research and development efforts.1 To date, however, little information has been available about the extent of the role of foreign NGOs in carrying out U.S. global health programs.

To fill this gap in information, this report provides an analysis of foreign (non-U.S.-based) NGOs that received global health funding from the USG during FY 2013. Due to the parameters of the analysis as well as data limitations, this report focuses on USG funding that the U.S. Agency for International Development (USAID) received through direct appropriations and through interagency transfers (e.g., from the Department of State2), which together account for the majority of U.S. bilateral global health spending.3 Specifically, its findings are based on a Kaiser analysis of data on funding disbursed by USAID in FY 2013 to foreign NGOs implementing USG global health activities, which was downloaded from the USG’s Foreign Assistance Dashboard.4 Other sources of data included organizations’ websites, which were used to confirm organizations’ non-profit statuses and the locations of their headquarters/main offices implementing specific global health activities. (See Box 1 for the definition of foreign NGOs utilized in the analysis and Appendix A for a detailed methodology.) In addition to identifying these NGOs, this report examines their funding levels, program areas, and geographic focus.

For the purposes of this analysis, to be eligible for inclusion, an organization had to meet the following definition of a foreign NGO: a non-profit that is independent of any government, not based in the United States, and not a university/college, a hospital, or a foundation that solely supports a government department/agency, hospital, or university. This definition was informed by the USAID definition of private voluntary organizations (PVOs),5 which guides a USAID registration process for NGOs.

In FY 2013, nearly 160 foreign NGOs received USG funding through USAID for carrying out global health activities. In FY 2013, 157 foreign NGOs received USG funding from USAID for implementing global health efforts (see Appendix B). They included NGOs that are focused mainly on a single global health issue, those working in multiple global health areas, and those addressing global health within a broader development scope. For example, The AIDS Support Organization (TASO), located in Uganda, provides services and support to people living with HIV; the Reproductive and Child Health Alliance (RACHA), located in Cambodia, provides a range of services, including those focused on family planning and reproductive health and tuberculosis, with an emphasis on capacity building; and Caritas Rwanda provides health services and supports rural development and food security programs.6 Among the 157 NGOs, there were also 24 faith-based NGOs,7 such as Lembaga Kesehatan Nahdlatul Ulama (LKNU), an Islamic organization in Indonesia, and the Church Alliance for Orphans (CAFO), an interfaith organization located in Namibia.8

Most funding provided to NGOs was directed to a small number of organizations. Twenty NGOs accounted for the majority of funding (75% or $266.6 million) (see Figure 2). Among these, 6 received more than more than $10 million in disbursements each, collectively accounting for more than half of all funding (53% or $187.0 million). These were the KNCV Tuberculosis Foundation, Right to Care, Marie Stopes International, Anova Health Institute, Society for Family Health Nigeria, and Hospice Palliative Care Association of South Africa. On the other end of the funding range, 104 NGOs received less than $1 million each. 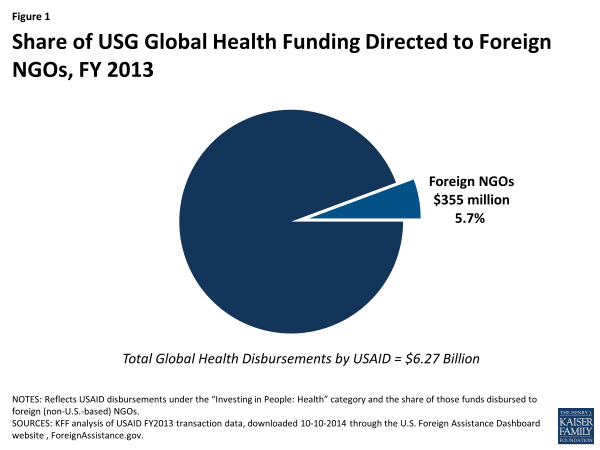 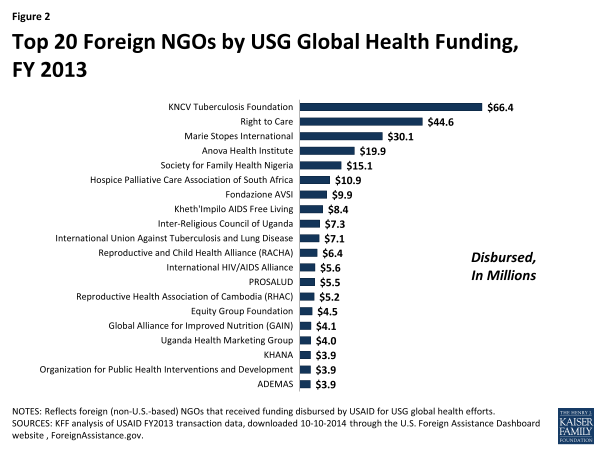 NGOs carried out USG global health efforts in nearly all of the major U.S. program areas. NGOs worked in eight of the nine global health program areas of the USG, including: HIV/AIDS; tuberculosis (TB); malaria; family planning/reproductive health (FP/RH); maternal and child health (MCH); nutrition; water supply and sanitation; and pandemic influenza and other emerging threats (PIOET).11 None received disbursements from USAID to work in the program area of other public health threats, which includes neglected tropical diseases (NTDs).12

The program area involving the greatest numbers of NGOs was HIV, followed by water supply and sanitation. As Figure 3 shows, 97 NGOs worked on HIV and 28 on water supply and sanitation, followed by MCH (24), FP/RH (22), TB (16), and malaria (10). The fewest number of NGOs were involved in carrying out nutrition (9) and PIOET (3). The greatest amount of funding to foreign NGOs was for HIV efforts, followed by TB and FP/RH. (See Appendix C for a listing of NGOs by program area.) 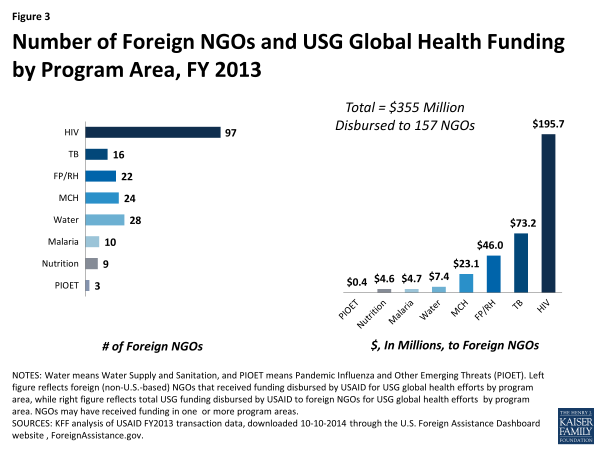 The headquarters of foreign NGOs were located most often in Africa, Asia, and Europe. The headquarters/main offices of foreign NGOs were in 47 countries. The greatest number were based in South Africa (22), followed by Uganda (11), the United Kingdom (10), Tanzania (7), and Indonesia, Kenya, Namibia, and Nigeria (6 each). Some NGOs may be based/have their headquarters in one country but conduct global health activities supported by USG funding in others.

More than a dozen NGOs provided “worldwide” support or focused on activities with global purposes.13 In FY 2013, 15 NGOs received funding for “worldwide” USG global health efforts; 11 received only “worldwide” funding, with the rest also receiving funding for country-and region-specific efforts. A small proportion of funding provided to foreign NGOs (7% or $25.7 million) was directed to such efforts. “Worldwide” activities may include providing technical assistance to field missions as part of certain project awards and carrying out globally-focused activities.  For example, in FY 2013, funds considered to be for “worldwide” efforts were disbursed for field support activities related to nutrition and HIV led by the Global Alliance for Improved Nutrition (GAIN) and for operational research and other TB-related activities carried out by the International Union Against Tuberculosis and Lung Disease. 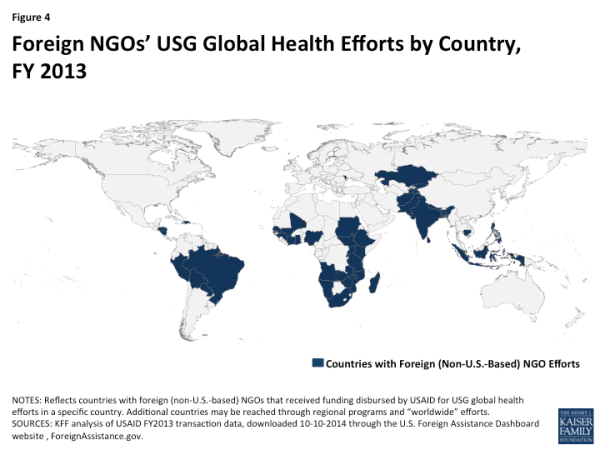 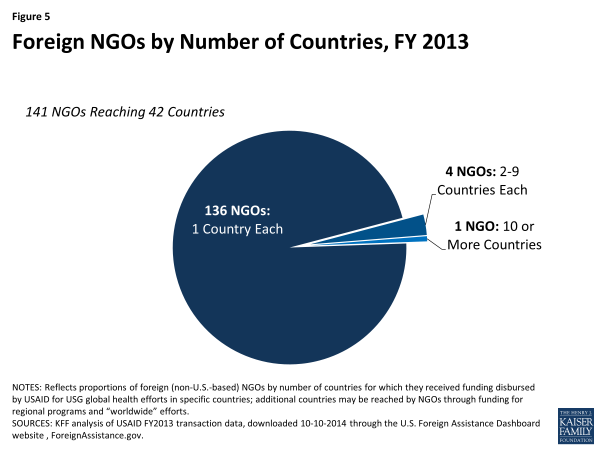 Most of the countries with the highest levels of NGO funding are in sub-Saharan Africa. In FY 2013, among the 13 countries with the highest country-specific USG funding to foreign NGOs (see Figure 7), 9 are in sub-Saharan Africa. Funding to NGOs exceeded $10 million in each of 8 countries and was highest in South Africa ($97.8 million), followed by Uganda ($47.1 million) and Nigeria ($31.6 million). On the other end of the funding range, USG funding to foreign NGOs was less than $1 million in each of 16 countries. 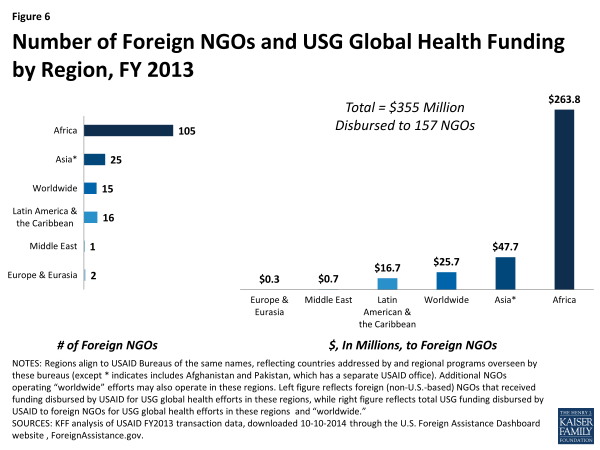 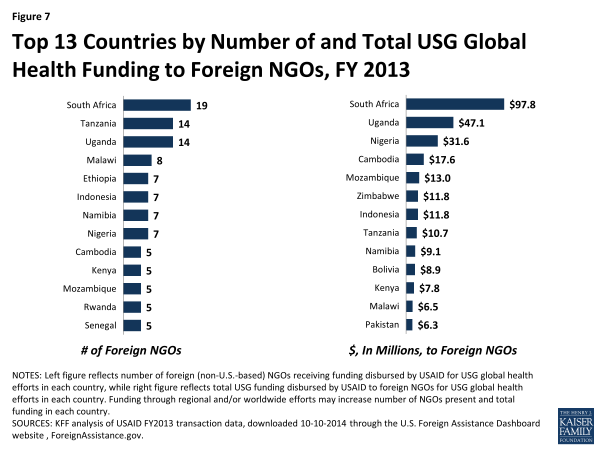 As the findings of this report have shown, foreign NGOs play an important role in carrying out USG global health efforts. Greater understanding of the extent of foreign NGO engagement in these efforts can be elucidated by further analysis, as data on USG global health funding for such NGOs become increasingly available publicly and as the quality and clarity of these data improve. The USG has taken important steps in recent years to make funding and project data more available and easily accessible, but further attention is still required to fill in gaps in data – particularly with regard to USG funding sources beyond USAID – and to ensure the quality and completeness of existing USG data resources. Such data are critical to evaluating whether investments in these NGOs further achievement of USG global health goals. The findings of this report suggest that the role of foreign NGOs will be important to consider in understanding USG global health efforts going forward, particularly given the growing USG emphasis on country ownership and transitioning USG global health efforts to country and local control.