Why are people still uninsured and what are their coverage options?

Though much attention was paid to the difficulties with the application and enrollment process during the 2014 open enrollment period, logistical issues in applying for coverage do not appear to be a leading reason why people went without insurance in 2014. Rather, lack of awareness of new coverage options and financial assistance appear to be a major barrier. In addition, confusion about eligibility is evident among the remaining uninsured. As of fall 2014, uninsured adults were largely uncertain about whether they would seek coverage in 2015 or where they will get it, and only a small share of those eligible say they plan to seek ACA coverage.

Cost remains a major barrier to coverage. While the ACA aimed to make coverage more affordable, for many (44%), the high cost of coverage is still the main reason that adults say they are uninsured. Many also cite limitations on eligibility for coverage, such as immigration status (10%) or being told they are ineligible (8%). A very small share (3%) says they are uninsured because they are either opposed to the ACA or prefer to pay the penalty. Notably, compared to the uninsured before the ACA, uninsured adults in fall 2014 were less likely to name job-related barriers as a reason for lacking coverage: 5% of uninsured adults named a job-related reason for lacking coverage in 2014, compared to over a quarter in 2013 (data not shown). As outreach efforts continue, the uninsured may be growing more aware of insurance options available outside of employer coverage, even while they perceive these options as unaffordable to them. 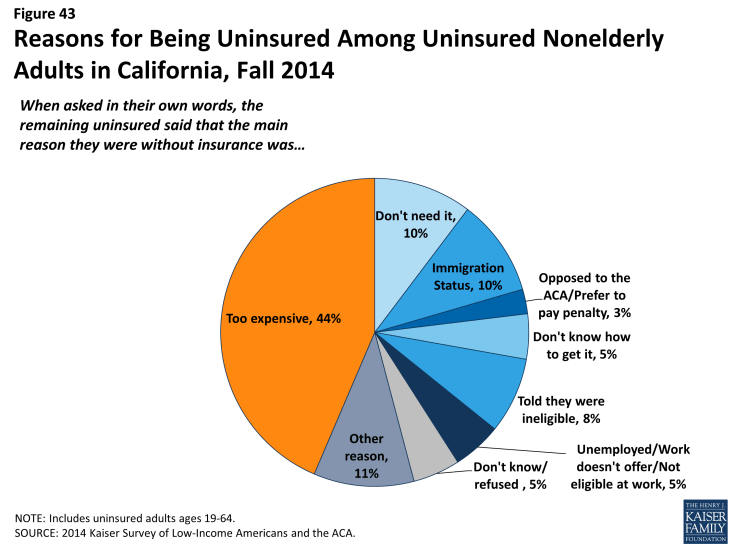 Figure 43: Reasons for Being Uninsured Among Uninsured Nonelderly Adults in California, Fall 2014

Coverage transitions remain a challenge to continuous coverage. As in the past, lack of coverage remains a long-term issue for most: eight in ten uninsured adults report that they had lacked coverage for all of 2014. However, nearly one in five actually had coverage at some point in 2014 but lost that coverage. This pattern is similar to that seen in the past: millions of people gain, lose, or change their health coverage throughout the year, and for some, these transitions lead to spells of uninsurance. As in the past, many (36%) who lost coverage in 2014 indicated that they lost employer-based coverage, but about a quarter who lost coverage in 2014 reported that they lost Medi-Cal. Some people may have in fact become ineligible for Medi-Cal but opted not to purchase other coverage, while others may have not renewed their coverage. People who became eligible for Medi-Cal before January 2014 had to re-apply for coverage at their annual renewal period, since the eligibility rules and forms had changed since they first became eligible.1 As adopted, the ACA envisioned a continuum of coverage with various coverage options available as people’s circumstances changed (such as job loss or income change), but implementing these transitions is administratively challenging. 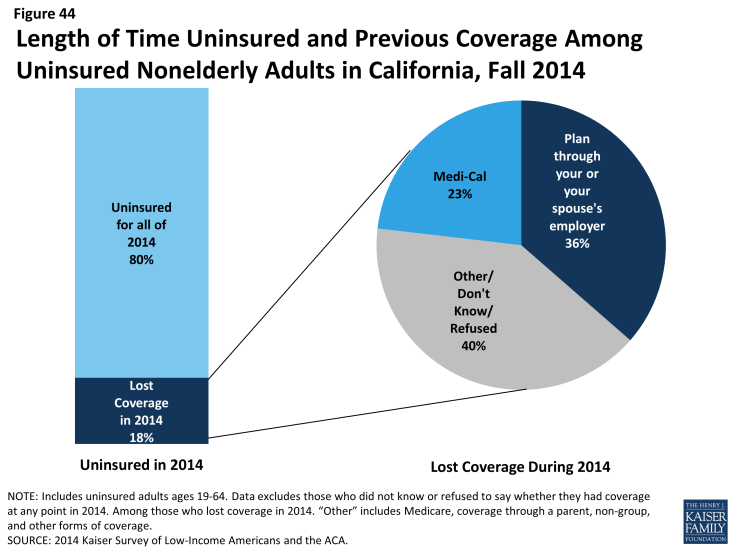 Most adults who were uninsured in fall 2014 had not tried to get ACA coverage; however, among those who did, perceptions of cost and eligibility were a more common reason for not obtaining coverage than application problems. Nearly two-thirds (64%) of uninsured adults did not try to get coverage from either Medi-Cal or Covered California in 2014. However, among those who did try to get ACA coverage, the most common reason people gave for not having ACA coverage was that they were told they were ineligible (38%), and more than a fifth (21%) said it was because the coverage was too expensive. Though smaller shares said that they didn’t get coverage due to problems with the application process, such as still having a pending application (16%) or not completing the application process (12%), the findings do indicate that many people encountered difficulty in applying for coverage. This distribution mimics what took place at the national level, where only about a third (37%) of the remaining uninsured adults had tried to obtain Medicaid or Marketplace coverage in 2014, and of those that tried, the most commonly cited reason provided for their lack of insurance was being told they were ineligible (data not shown). 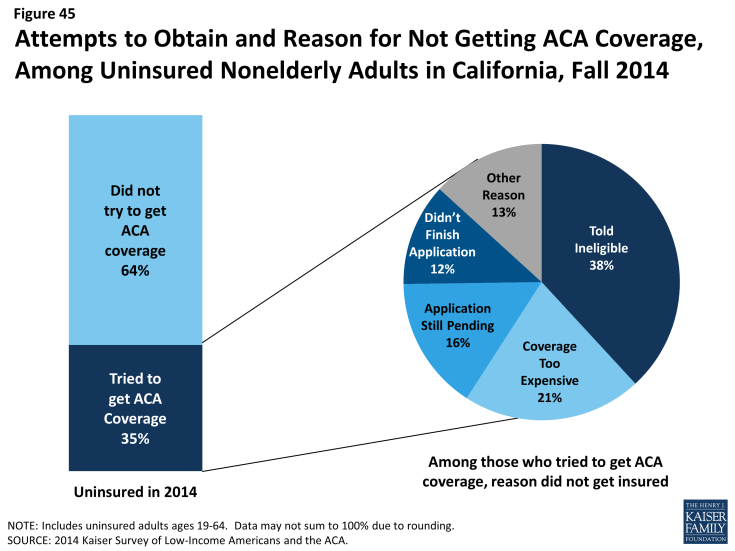 Figure 45: Attempts to Obtain and Reason for Not Getting ACA Coverage, Among Uninsured Nonelderly Adults in California, Fall 2014 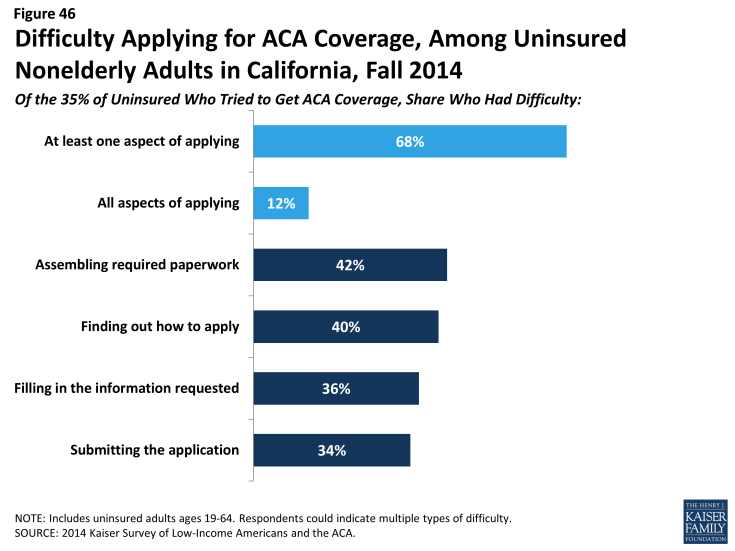 Among those who tried to get ACA coverage, most reported trying multiple avenues, and most tried to get coverage directly from the state or federal government. While the ACA envisioned a streamlined, “no wrong door” application and enrollment process, most people who sought ACA coverage in 2014 said they pursued multiple pathways to coverage. About half (48%) of uninsured adults who sought ACA coverage tried more than one pathway, a similar pattern to that seen among those who successfully gained coverage. The most common way that the uninsured sought ACA coverage was by visiting the Covered California website (50%). About a quarter (26%) reported that they called a toll-free number to get help, and more than a third (38%) visited a Medi-Cal agency. Many uninsured adults pursued other avenues for getting coverage—such as going to a provider for help (26%), contacting a health insurance broker (21%), or going to community agencies, schools, churches, or libraries (17%). 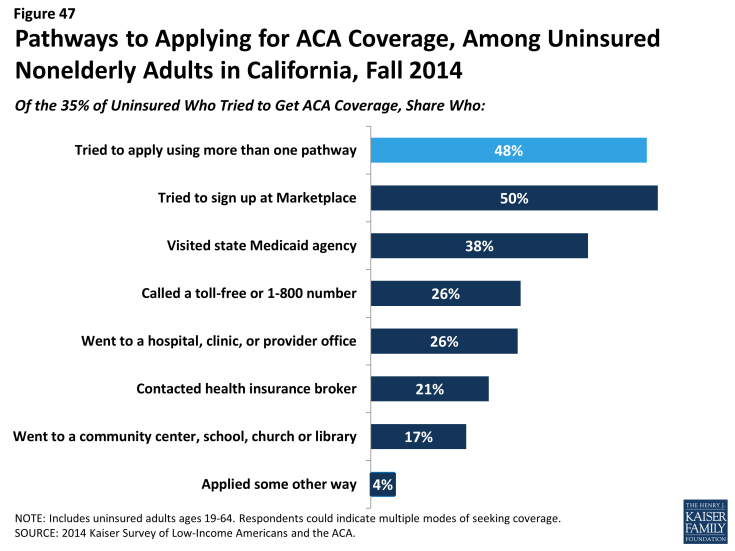 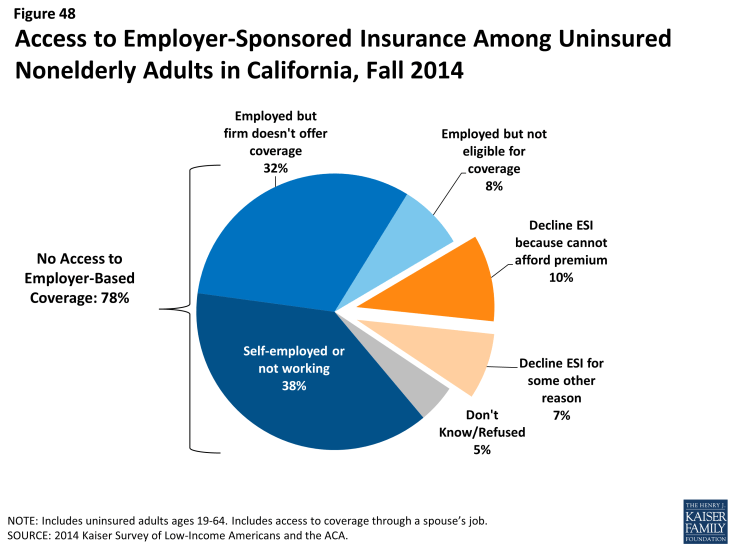 Even though most uninsured adults are now eligible for coverage, few uninsured adults had plans to obtain ACA coverage in 2015. Only about half of uninsured adults indicate that they plan to get coverage in 2015, and few who do identified Medicaid or Marketplace coverage as their goal. Rather, higher shares indicate that they don’t know where they will get coverage. According to an estimate reported out of UCLA’s Center for Health Policy Research, between 3.2 and 4 million people will remain uninsured in California in 2015.4 Many of these individuals (about 1.5 million) are undocumented and therefore barred from purchasing insurance on Covered California and from receiving full-scope Medi-Cal benefits, but many are eligible for coverage through Medi-Cal or Covered California. Eligible individuals may be unaware of new coverage options or may still find coverage unaffordable. Outreach to inform them of the availability of financial assistance may help reach these individuals. 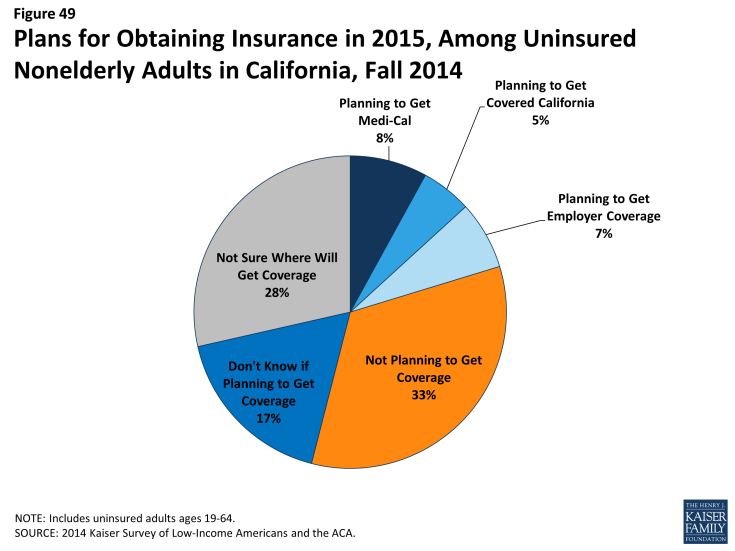 Figure 49: Plans for Obtaining Insurance in 2015, Among Uninsured Nonelderly Adults in California, Fall 2014